It looks like the writing is on the wall for Eaglet, our Mercury dinghy. At just seven years old, I expected quite a bit more use from her, but we’re starting to suspect that she doesn’t have another cruising season in her. Since buying pretty much anything is much cheaper and easier in the US compared to down in the islands, that means we’re probably going to be buying Eaglet’s replacement sometime this summer. So for those who are considering a dinghy purchase, here’s our long term review of life with an air deck inflatable.

When we bought Eaglet, we had a short list of requirements. We wanted a CSM (Hypalon) boat, because they’re supposed to last much longer in tropical sun. Our home state of Florida is pretty tropical most of the year, and we had plans to eventually go cruising, so we wanted the durability of CSM rather than PVC. At the time, I was reading that PVC dinghies will fall apart after about 5 years in the islands, while a good Hypalon boat can last 15 years or more.

We wanted a fairly light boat, because we knew we’d be lifting it onto our foredeck for passages. We also wanted to be able to roll it up for convenient storage, but we didn’t want to have to find a place to store a removable plywood or aluminum floor. And we had hopes of being able to get the dinghy to plane so that we could travel faster and thus further, which ruled out a flat-bottomed sport boat. It needed to have a V hull.

Some of these requirements are sort of contradictory. But our research indicated that an air deck inflatable would check all the boxes. Rather than using plywood or aluminum for the dinghy floor, it has a high pressure inflatable floor, similar to an inflatable standup paddle board. The floor requires 10 psi, which is actually quite a challenge to pump up using the included manual air pump. With the floor and keel inflated, the boat has a V shaped hull, and thus should plane. But with everything deflated, the boat rolls up and stows easily. No heavy wooden floor meant it should be easy to winch onto the foredeck. So in 2011, we bought a new Mercury 270 Air Deck dinghy.

Life was good for a while. Eaglet was light enough to hoist with our spinnaker halyard, and when the floor, keel and hull were deflated, it could be rolled up into a fairly small bundle for transport or storage. She would plane with one person, but our six horsepower Tohatsu couldn’t coax her up on a plane with both Rhonda and I onboard. Maybe an 8 horsepower might have worked, but a 6 hp was what we had, so we lived with it.

But then one day, the floor went flat, rendering the boat practically useless. The bottom of the boat is too soft and flexible to walk on with the floor deflated. It cost almost $400 to buy a replacement. It was at that time that I discovered that while we had paid the money to buy a CSM dinghy, the air deck was actually PVC. Nowhere in the online literature or advertising for the boat did Mercury ever mention this little fact.

Less than six months after receiving the new air deck, it also went flat. It failed at the exact same place as the first one. The floor has about a 5” hole in it (I call it the doughnut hole) to access the valve to pump up the inflatable keel, and the tape around this hole had developed a leak. Since the floor came with a 12 month warranty, I was able to get a replacement, but it required me to pay to ship the flat one to the warranty center. 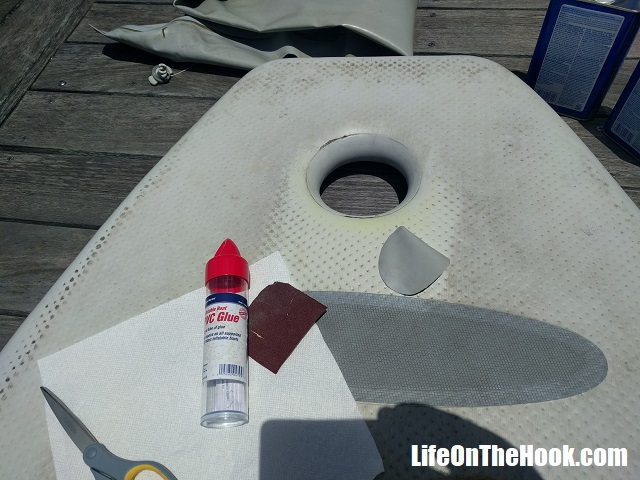 Attempting to repair the leak at the doughnut hole. The repair didn’t work. I really didn’t think it would.

After another 7 or 8 months, floor number three also went flat, failing again in the same area. Since the warranty period for the floor dated to the purchase of the first replacement, it was now beyond 12 months from the original purchase, and was no longer covered by warranty, even though this particular floor was less than a year old. Funny how that works. 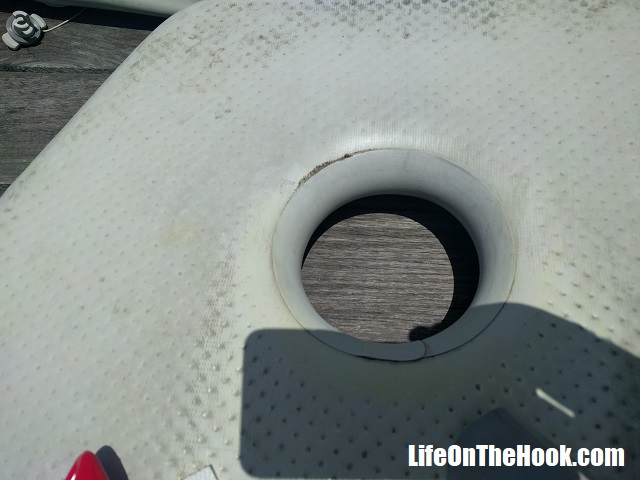 So now we’re looking at having to spend  yet another $400 for air deck number four. And we probably would, if we had confidence that the boat would hold up. But about a year ago, we noticed that the outer skin of the tape strips used to hold the seams of the boat together had started peeling off. At first it was localized enough that I actually tried gluing the peeling skin back on, but it would just peel off again after a month or two. 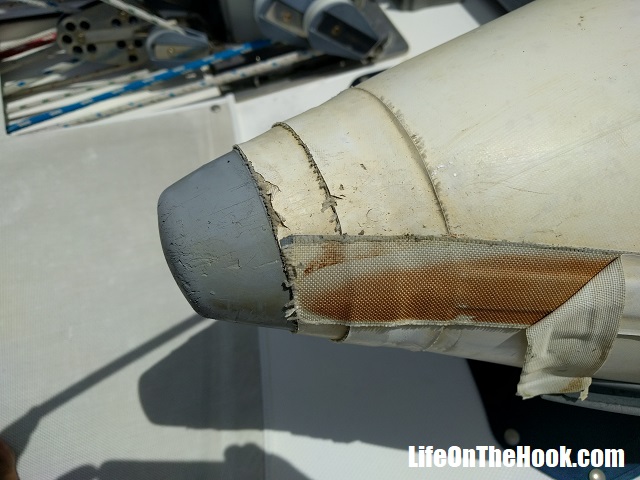 Then it began spreading to larger and larger areas, and I finally gave up and just starting cutting off the flapping ribbons. 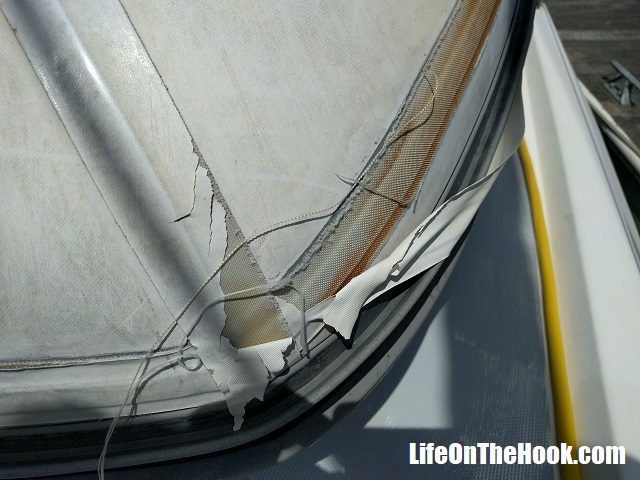 Then the underlying layer of reinforcing fabric starting peeling loose, leaving just a gray rubber strip. It’s beginning to look like it’s only a matter of time before a seam splits. 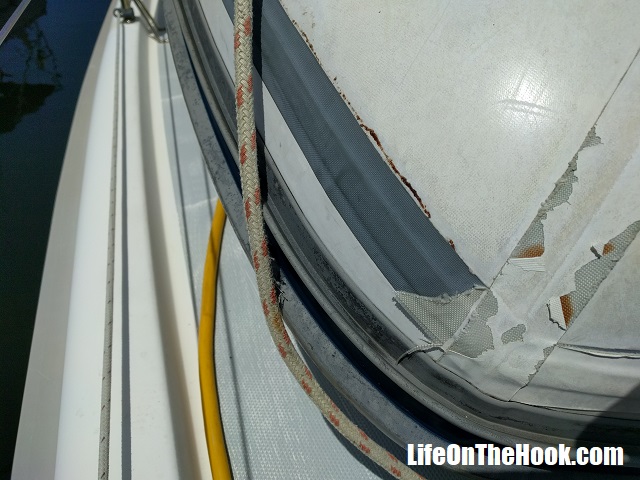 So at this point, it seems like good money after bad to buy another air deck for poor old Eaglet. Our time in the Bahamas has taught us that a rigid floor RIB is really the way to go, as it’s much better at covering large distances. They’re a bit heavier, but only by 20 or 30 pounds, so we should still be able to hoist it onto the foredeck for passages. And now that we’re full time liveaboard cruisers, we really don’t need to roll up and store the boat in the off season.

So in the final analysis, we’re giving the Mercury Air Deck inflatable dinghy a thumbs down for reasons of poor durability. For starters, Mercury should be more upfront about the fact that the CSM boat you’re buying is actually a CSM/PVC hybrid since the inflatable floor, a critical component, is only available in PVC. Next, a CSM dinghy that’s only used about six to seven months of the year and then kept under a cover the remainder of the year should not start falling apart after seven years. It should have lasted at least twice that long, in our opinion. And finally, you shouldn’t have to buy a new air deck every 18 months or so. The warranty center said the floor should last 10 years. I just laughed. Maybe if you never inflate it, possibly. But in actual use, they blow the same seam just slightly after the warranty runs out, which tells me we’re either dealing with a significant design defect or a deliberate revenue generating strategy.

So if you’re shopping for a dingy, we recommend taking a pass on the Mercury Air Deck. It’s just not worth it.