If you’ve spent any time around boats, you know how valuable storage space is. There’s never enough room for all the “stuff” you want to bring onboard, and being a cruiser and liveaboard means life is a constant exercise in possessional triage, where every item has to have enough value and utility to make the cut and find a home on board, with the rest ending up stored ashore or disposed of. Things are even a bit worse when you own a Hunter, like we do. Hunter put a great deal of effort into packing the biggest living spaces possible into the hull, which makes the boat live like one that’s significantly larger. But it comes at the expense of little things like storage lockers. You get a lot of room to lounge on a Hunter, but not a lot of places to store stuff. So when we find a way to turn an unused area into a locker, we jump on it.

While waiting around to see what Hurricane Irma was going to do, we decided to start pulling out our cabin sole (interior floor) to apply some coats of polyurethane. When we unscrewed the chart table seat from the deck and removed the sole panel, we found this vacant, completely empty, totally unused void. There’s probably two whole cubic feet of potential storage there! Enough to allow for a significant expansion of our wine collection, an additional case of beer, or possibly even something practical, like groceries and spare parts. 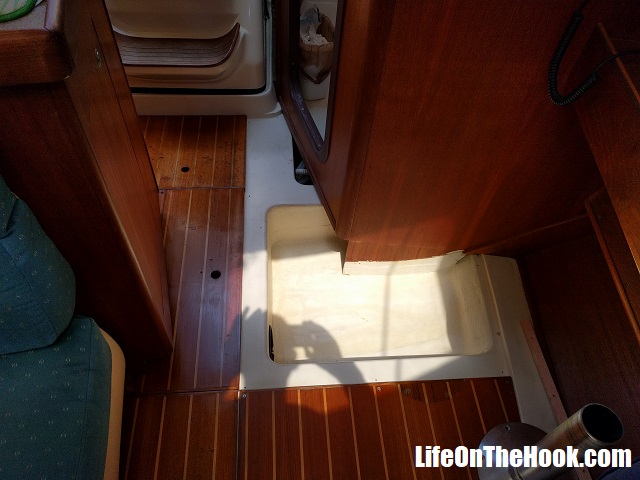 We know a really good, reasonably priced marine carpenter here in Pensacola, so I immediately gave him a call to ask him how busy he was at the moment. As things worked out, his truck was at the repair shop and he was just puttering around his shop working on this and that. Could he do a quick plunge-cut on a sole board to put in an access panel, I asked him? Sure, drop it on by, he said. So we dropped the panel off, and four hours later we had a newly cut and trimmed out access panel, opening up this formerly sealed void that probably hadn’t seen the light of day since April of 1997 when Eagle Too was built. 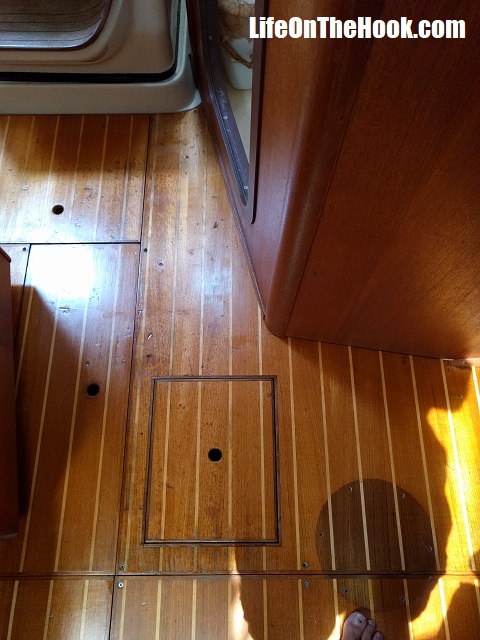 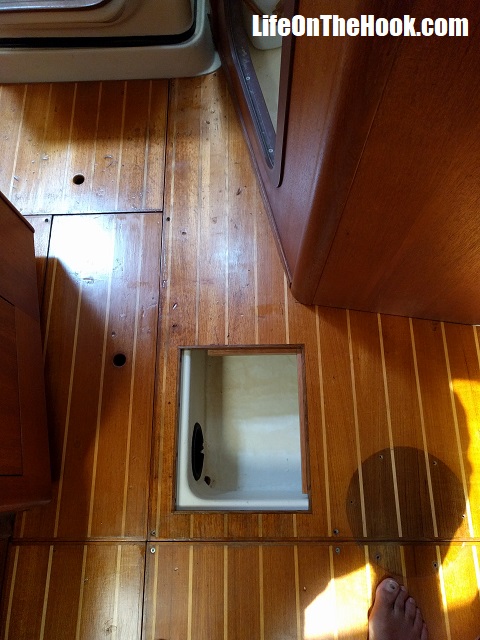 Cutting the hole took a lot of the strength out of the panel, so before reinstalling it we attached a cleat to the head bulkhead to support the edge of the sole panel. I’m actually surprised the factory hadn’t put a support cleat here since that was such a large, unsupported span, and it explains why that particular floor board always creaked when walked on. 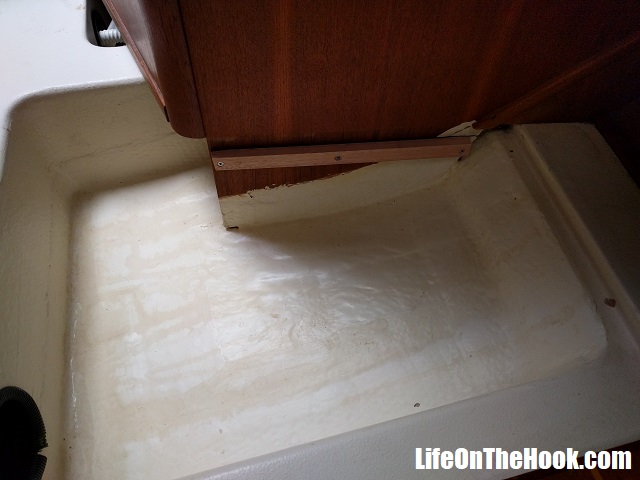 Do you own one of the hundreds of Hunter 376’s (or possibly a 380 or maybe even a 386, which are later versions of the same boat)? Then you might want to look into opening up this enclosed void. Because it’s an easy way to create a couple of cubic feet of that most valuable of spaces, a place to store your stuff.