Since purchasing Eagle Too, we have slowly worked our way through installation of an entirely new marine electronics package—wind, depth and speed instruments (the old ones were wonky and obsolete), chartplotters at the helm and chart table, autopilot, radar, and AIS (none of which were onboard originally). All Raymarine. The only thing we have onboard that isn’t from that particular vendor is our Sony marine stereo and the old Uniden VHF radio that’s still perfectly functional and thus not currently in need of replacement.

If there’s one thing that has undergone a radical transformation in the last one to two years, it is marine electronics. Until just recently, everything was designed to proprietary standards and formats. Nothing talked to anything else, or at least not easily. But PC technology (that would be of the computer variety, not the political variety) has finally bled over into the boating realm. For instance, our two chartplotters use standard Atom processors such as the ones you’d find in Android devices like Chromebooks and tablets. Everything talks over a marinized version of Ethernet.

Why does it matter? Because everything finally works and lives up to its full potential! Here’s an example. Raymarine is continually updating its core operating software, called Lighthouse II, to incorporate new features and capabilities. They just released an entirely new version that includes things like better integration of radar and AIS target tracking, enhanced WiFi capabilities, and wider chart support. I scanned the list of new features, and decided it was an update worth installing.

Now in the past, this would have involved downloading a bunch of  files, and then going from device to device performing individual updates using each one’s unique update process, probably with a break for lunch and possibly having to finish the next day. But not anymore. This time, it was a single (huge, like 1gb) data file, which I copied to a micro SD card. I then plugged it into my master chartplotter, and powered up the network. The plotter said “Oh look, new software!” and then searched the network for devices to update. 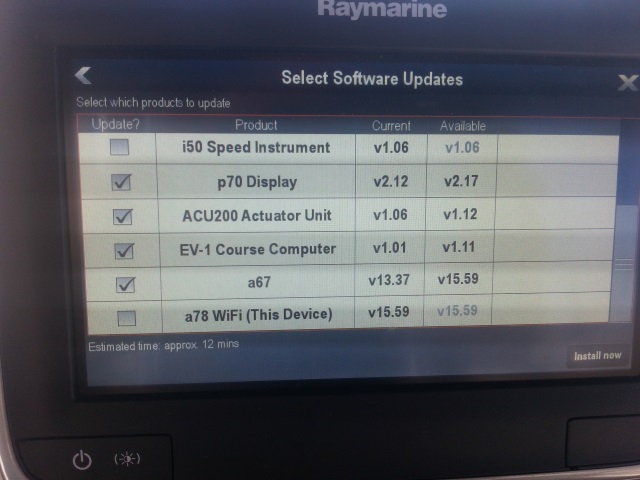 After choosing the devices I wished to update, I pushed Install Now, and it was off to the races. While I quietly sipped a cup of coffee, each device on the network was automatically updated and rebooted. 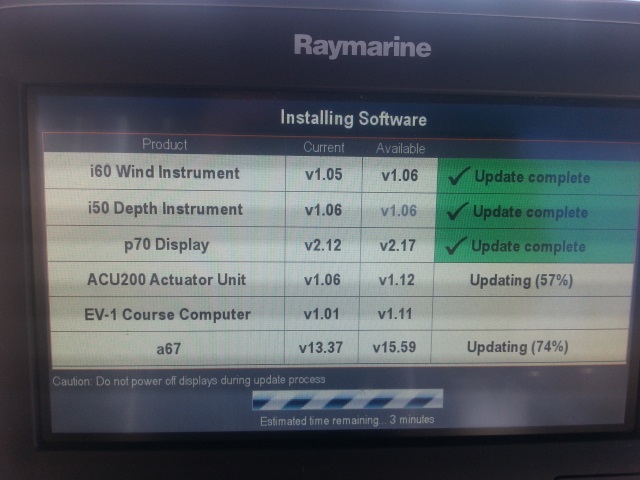 And in less than 10 minutes, it was done. The hardest part of the entire job was the original file download, and that was entirely due to how much our WiFi here at the marina sucks wind.

The only complaint I have about this whole state of affairs is how totally obsolete paper manuals have become. I’m old school. Probably because I’m old. When I want to look up a feature or how to change a setting on one of our gizmos, I’d much rather sit in the cockpit and open a manual than have to drag out and boot up the computer. In preparation for moving onboard last year, I printed out the latest version of the chartplotter operating manual and put it in a three ring binder. It was over 400 pages. And it’s now basically useless. It’s useless because other than the instructions for turning it on and off, the whole thing has been changed due to multiple software updates. And I’m not going to waste a gallon of printer ink (which costs more per ounce than fine French perfume) to constantly try and keep an up-to-date printed copy onboard. So I’ll have to learn to adapt.

But I do really love it when something just works.