It’s now the first week of June, and you know what that means—the 2016 hurricane season has begun. So it’s not surprising that we have a tropical low moving through the area this weekend. We had originally planned to start moving further south this week, but once this system appeared, we decided to stay put and see what happens. Lobsterfest in Belize doesn’t start until June 15th, so we have plenty of time.

Since it’s a bit blustery with intermittent rain outside and we’re just chilling down below, this seemed like a good time to acquaint you with our daily life here on Isla Mujeres. After over two weeks at El Milagro marina, things have definitely settled into a comfortable routine.

Let’s start with how we go ashore. A shallow bank just beyond our slip made it impossible to back in to the marina, so we’re currently tied to the pier bow-first. This means that unfortunately, we have to climb over the bow to get on and off the boat. 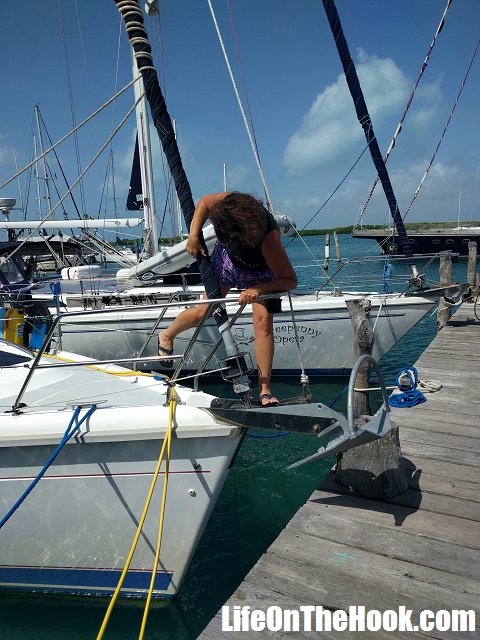 There’s just no graceful way to do this. The marina staff initially gave us a stepping stump to use, which you can see above behind our anchor. We’ve since upgraded to a small set of fiberglass stairs that we acquired when another boat recently departed. It’s not the best way to board a boat, as it really makes you consider your level of adult beverage consumption while ashore, since tequila and gymnastics aren’t really complimentary. But so far we’ve managed without major mishap. 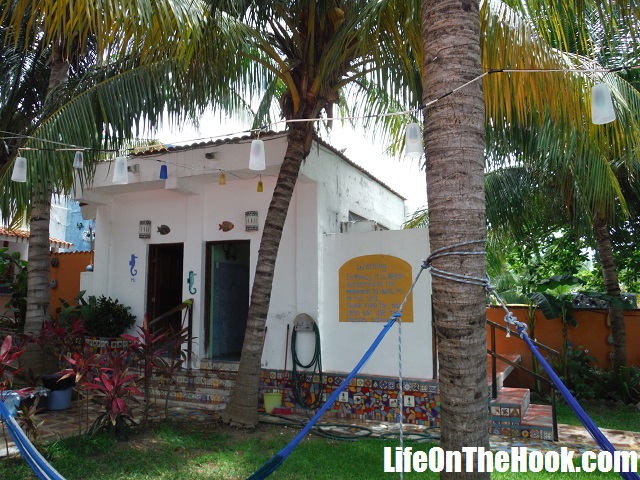 These are los baños, or the bathrooms, here at the marina. None of the marinas here have pump out facilities, but they do have very prominent signs stating that it’s illegal to empty your holding tank overboard. So in order to not fill up our tank, we’re usually going ashore to take care of business. It can be an interesting experience, as we share the facility with the local iguana population. From my favorite stall, when you look straight up, you see this: 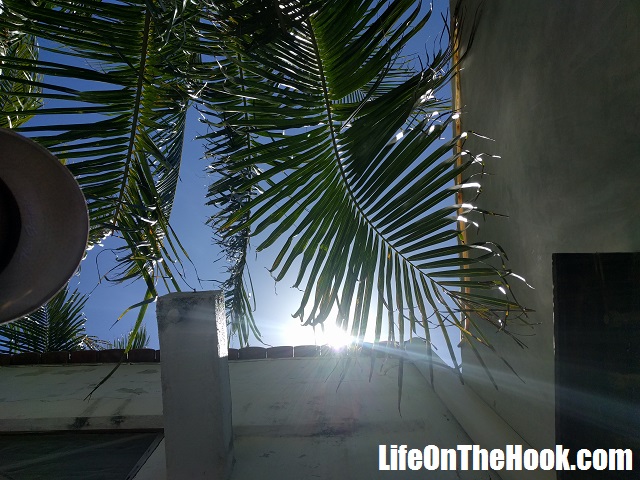 A room with a view, sort of an indoor/outdoor experience. This guy is the occasional bathroom monitor, and when on duty keeps a close eye on the comings and goings. 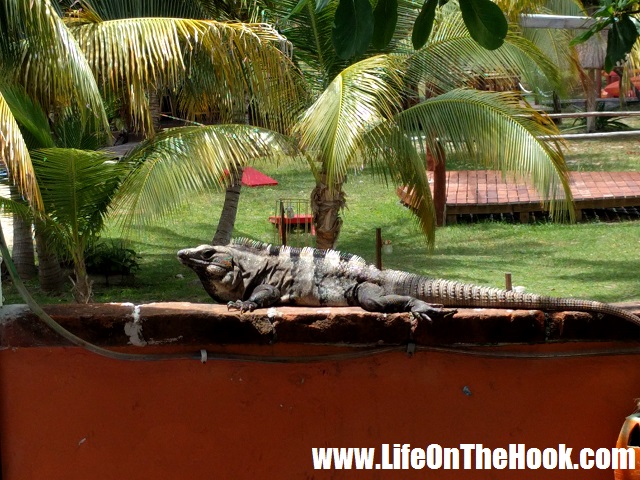 Please don’t forget to tip your lizard on the way out. They apparently work for chicken bones. 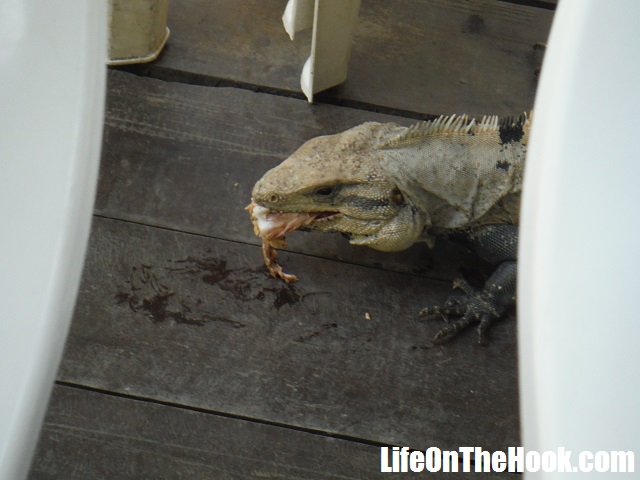 Every few days we make a supply run into town. There’s a large grocery store about a 20 minutes walk south of here, but we’ve found it much more convenient to take the dinghy north into town, where there is a smaller Xpress Grocery tienda about three blocks from the dinghy dock. Even though it’s not much larger than a convenience store, we find it has everything we need, including a bakery. 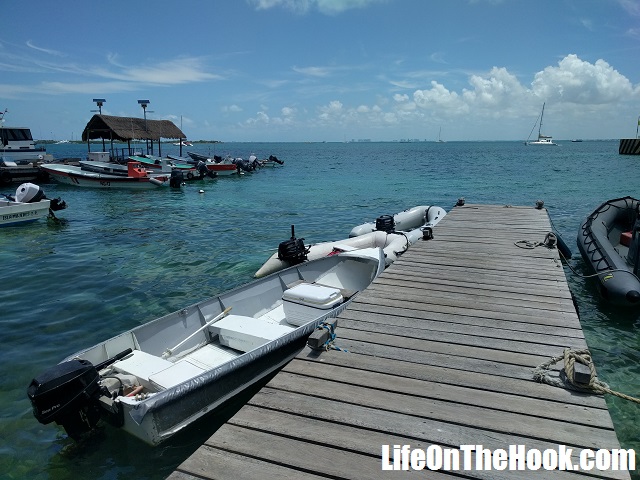 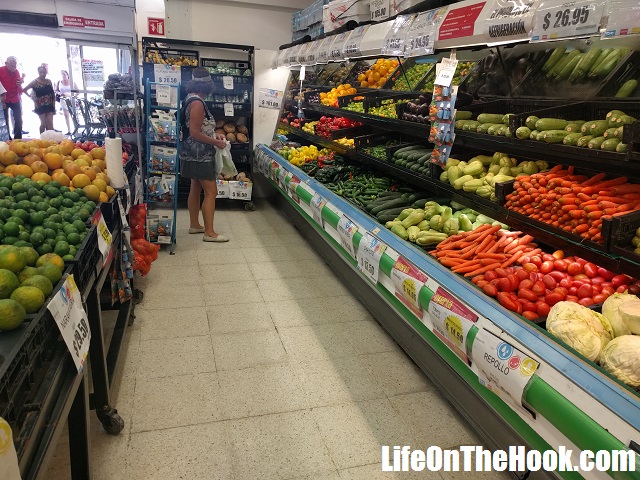 It’s true what we’d heard about eggs—once we left the States, they’re no longer refrigerated. It took a little getting used to seeing shelves of eggs just sitting at room temperature. But now we take them back to the boat and leave them sitting on the counter for days before they finally make it into the refrigerator. We haven’t had a bad one yet! (This is actually a picture we took during a shopping trip to Cancun, but it shows you what I’m talking about). 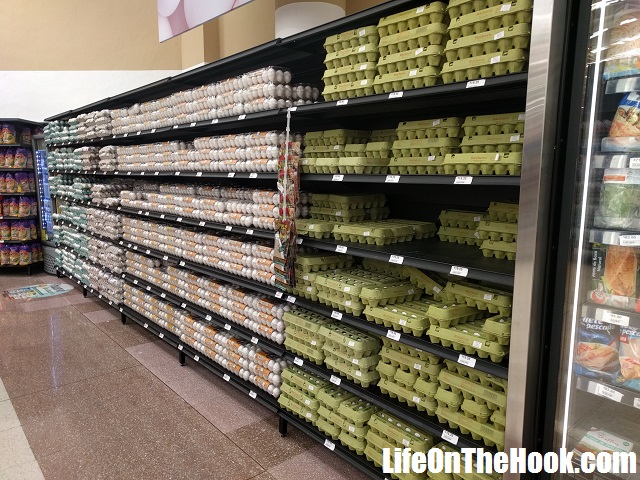 Using our dinghy Eaglet as a taxi, it’s most convenient to leave her in the water tied to our stern, available at a moment’s notice. But it’s amazing how fast growth forms in these warm tropical waters. After about ten days, she was developing quite a shaggy green beard, and it did not suit her at all. So we beached her to scrub her bottom. It looks like this is going to be a regular chore from now on. 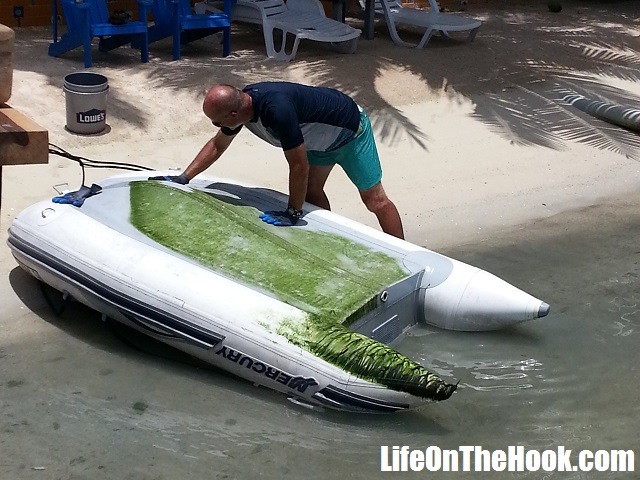 Fortunately refreshments are easily at hand. They’re literally falling from the trees! We tipped one of the marina staff 25 pesos (about $1.50 USD) and he delivered two fresh coconuts ready to drink. 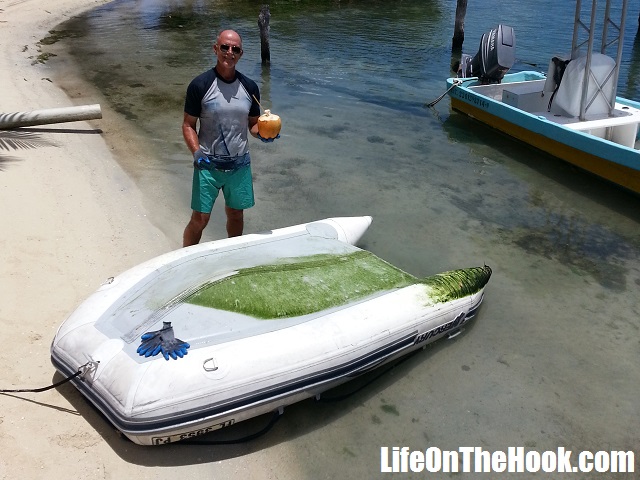 While not our favorite way to spend a morning, cleaning Eaglet was a minor inconvenience compared to the problem our neighbor two slips down was experiencing. Apparently a colony of bees had made a home in their mast while they were recently in Guatemala, and the bees were no longer interested in sharing the boat. Since the people had no intention of leaving, an exterminator had to be called to deliver an eviction notice to the bees. 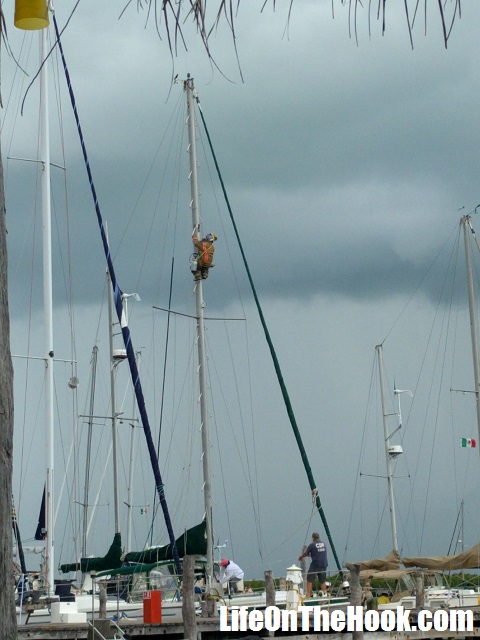 We popped a couple of beers and sat under the palapa onshore to watch the fun, wincing whenever we heard one of the workers swat and yell from being stung. The bees apparently liked their home very much and did not leave willingly.

With the weather forecast looking pretty dodgy, some folks decided to wrap up their time in Isla Mujeres and skedaddle south toward the Rio Dulce in Guatemala. We waved goodbye to Jerry and Susan on Vita Dulce (a couple we met who were from the Seattle area and were fellow Seahawks fans) as they elected to use the few remaining days of predicted stable weather to make the passage. But that’s a big part of this cruising life. Someone is always arriving or departing. 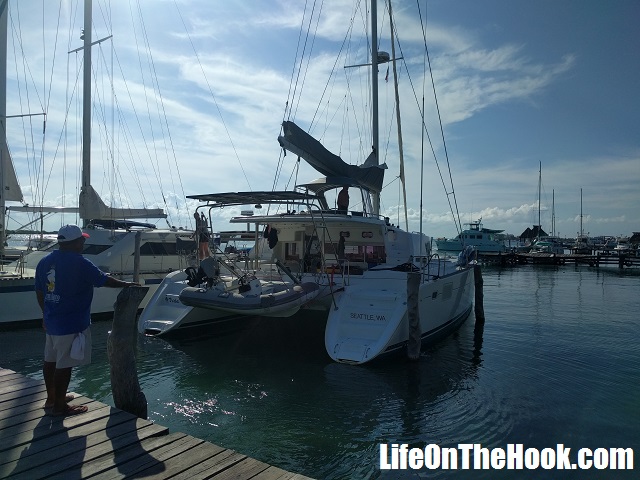 We eat, we drink, we socialize with other cruisers. It’s amazing how often we decide that today we’ll cook something onboard for dinner, but come sundowner time we find ourselves at one of the numerous local restaurants instead. It’s just too hard to pass up a good meal for $10 or $15 for the both of us, avoid all the cooking and cleaning up, and have leftovers that will make a great lunch the next day! 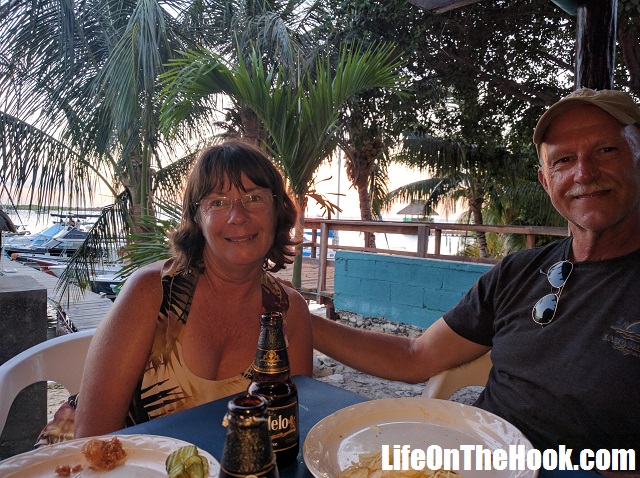 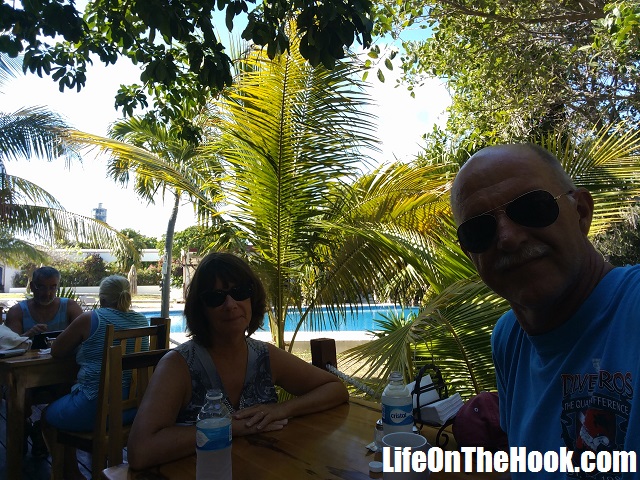 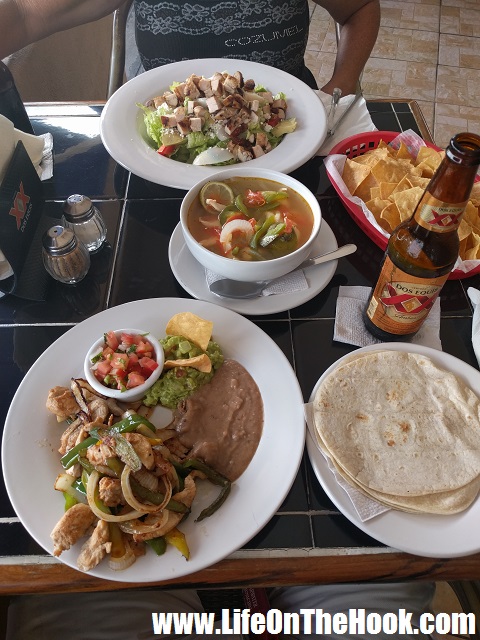 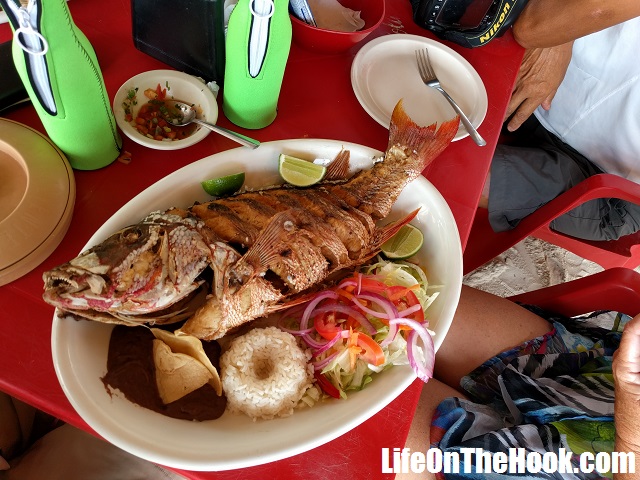 A funny thing though about the local food. Rhonda looked at me yesterday and said, “You know what I’m craving? Mexican food.” Now mind you, we’re in Mexico, and most of what we’re eating is definitely local food. But I knew exactly what she meant. We have a craving for the food we’d get at Cactus Cantina back in Pensacola, Florida. Good old enchiladas swimming in red sauce, crunchy tacos and chips and salsa. Stuff like that. They actually don’t eat dishes like that in Mexico, or at least, here in the Yucatan. I guess what we’re craving is the Americanized version of northern Mexican food.

So what’s next for us? Well for the time being, we’re going to sit tight a little while longer to let the weather sort itself out. We’ve found another couple headed to the Rio Dulce who might like to buddy-boat down, so we may end up leaving with them. They’re not planning to depart until the end of the month though, and we’re not sure if we should wait that long, so we’ll see. Meanwhile, the thought has crossed our minds that Isla Mujeres sure seems like a pretty nice place with lots to see and do, and maybe just spending the summer hanging around here wouldn’t be a bad idea. The hurricane risk here shouldn’t be any worse than the one we lived with for years back in Pensacola. But that’s the nice thing about being cruisers. With no particular place to be, and all the time in the world to get there, we can just change our minds to suit our circumstances. 🙂