Five months and 2,400 miles after throwing off the lines at Palafox Pier and Yacht Harbor in downtown Pensacola, Florida, Rhonda gently worked the throttle to carefully back Eagle Too into a slip while I hung from the starboard shrouds, ready to jump ashore and tie off our docklines. 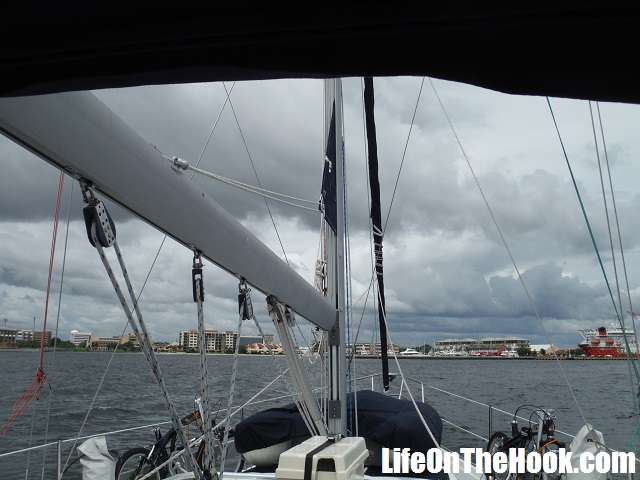 After cleating off the lines, I climbed back aboard while Rhonda shut down the diesel. As the engine shuddered to a stop, the low-oil-pressure alarm whistled shrilly until Rhonda reached down and switched off the engine key, silencing it.

We noted the time for our log, checked the instruments as we usually do upon arrival, and then, our end-of-voyage ritual completed, stood for a moment in the now silent cockpit, taking in our very familiar surroundings.

“We’re home,” we said to each other. For we had just returned to what has become the closest thing to home for us now that we live the life of vagabond cruisers. We were once again docked at Palafox Pier. 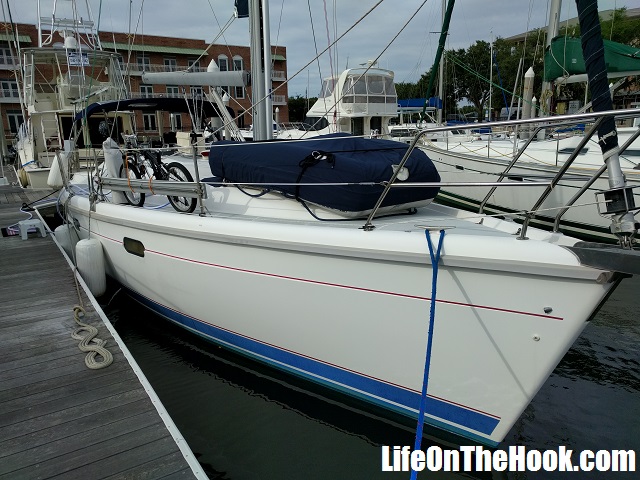 We previously lived in slip 6 on E dock for 16 months, but it has another occupant now, and we slid instead into slip 11 on D dock. We can clearly see our old home, it’s just right over there, and we look with dismay at the squatter currently occupying “our” spot. But D dock isn’t a bad place, and we’ll be fine here for now.

The marina at the Naval Air Station was accommodating and affordable, but unfortunately there is very little there in the way of shopping or dining. Getting around required a car, and after five weeks, we’d pretty much worn out our ability to borrow a car from family or friends. Moving to downtown, while more expensive than the Navy marina, would be cheaper than staying put and renting a car, and would put numerous replenishment and dining options within walking or biking distance. With luck, we won’t be here too long. Rhonda thinks I’m being overly optimistic, but I’m hopeful that we’ll have the issue that brought us unexpectedly home sufficiently under control by November to let us head out again before the weather gets too cold. We’ll see. 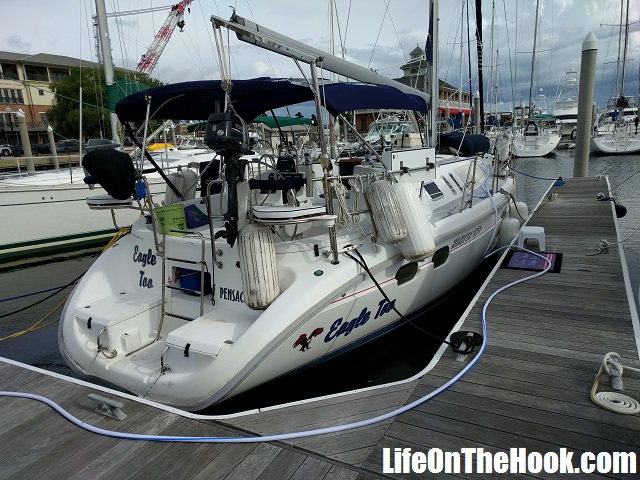 You may have noticed that It’s been a while since we’ve posted an update.  The creative energy that would have normally been expended formulating blog posts has instead been devoted to teasing out solutions to a complex family health issue. After a day of dealing with counselors, doctors, and social services workers, there just isn’t the energy or desire to pull together a blog entry. It’s all been quite depressing actually, and depression is not much of a motivator. But we’ve been making progress, things may be on the right path now, and we’re feeling somewhat optimistic that the time may soon come when we can resume our voyage and things here will be fine in our absence. And optimism is energizing. So maybe the drought has ended. Again, we’ll see. For now, just know that Rhonda and I are fine, we’re home, and we’re looking forward to the (hopefully not far off) day when we can once again head out and resume our interrupted journey.