“I expected you to come in on crutches,” my therapist said at my first physical therapy appointment.

I hadn’t. I was wearing the leg brace my surgeon had prescribed, but rather than locking it rigidly as directed, I’d released it to swing 30° so that I could move my injured leg enough to limp along without crutches.

While lying in bed recovering from the surgery necessary to put my left knee back together, I’d had plenty of time to surf the web, researching the procedure my orthopedic surgeon had performed. I was particularly interested in the discussions on recovery time. The listed recovery range for a partial kneecap removal and patellar tendon reattachment ran from six weeks to one year, with the average being five to six months. I thought six weeks sounded pretty good. I wanted to be that guy. So I started pushing myself pretty aggressively.

It started while I was still in the hotel room we stayed in post-surgery while waiting to regain enough strength to be able to get back onboard Eagle Too. First I’d use my crutches to get back and forth to the bathroom. Then I started leaving one next to the bed, using the other as a cane. Within a couple of days, I was able to hobble back and forth without them.

Once back onboard, I started taking a daily walk. At first I could barely make it to the nearby street corner and back, stopping to pat the corner lamppost in triumph before returning to the boat, holding on to Rhonda the entire time to steady myself. After a few days, I was slowly adding distance to my route.

Two weeks after surgery, at my first follow-up with my surgeon, he told me I could begin weight bearing on the leg. “Way ahead of you, doc,” I said. “I’m already walking around the block every day.”

Two weeks later I started physical therapy. That’s when I surprised them by walking in rather than hobbling in on crutches. They were even more surprised when after two weeks of therapy I showed up without my leg brace. I just felt it was doing more harm than good. I understood the need to protect my knee from being flexed excessively and tearing the tendon repair. But walking with a cage on my leg was throwing my gait off so much that my hips would hurt like hell after a 20 minute walk. I could see where if I followed the prescribed regimen and wore the brace for 12 weeks, I’d need to learn how to walk all over again once it was off. So I jumped on Amazon and ordered a Velcro knee support to wear instead.

“You need to put that leg brace back on,” my therapist sternly lectured me.

“Yeah, that’s pretty much not going to happen, it’s killing my hips when I walk,” I replied.

“Well you really shouldn’t be walking so much,” he said unapprovingly. “I want you back in that brace.”

Another week, another therapy appointment. I again showed up with just my Velcro support.

“Have you been wearing your brace?” my therapist asked.

“Not one time,” I replied. We just stood and stared at each other for a moment, and then he shook his head and started warming up my knee with an ultrasound probe.

Rhonda and I resumed our Tuesday walks to the local AMC theater for $5 bargain movie days. Then we started going a few more blocks to Starbucks. Another week, and I was once again accompanying her on the mile walk to Publix for groceries. I started walking back wearing 20 lbs of groceries in a backpack.

At my six week post-surgery follow-up with my surgeon’s nurse, she was as dismayed as my therapists. But when I showed her that I could stand, walk, and move my leg freely, she shrugged, checked with the doctor and then wrote me a new physical therapy prescription authorizing strength training exercises.

Now it felt like I was getting somewhere. Rather than just standing and waving my leg around at therapy, I could start using the leg press machine and ride the stationary bike. Another week went by and then I decided to test myself. I’d been using Uber and Lyft to get back and forth to my therapy appointments. I now decided to get a ride to my appointment, and then walk the 1.5 miles back to the marina afterwards. It went OK, and that became my new routine. Last week, I started walking both ways. You should have seen my therapist’s face when I said I didn’t need to do any warmups since I’d walked a mile and a half to get there and I was pretty sure the knee was warmed up already. 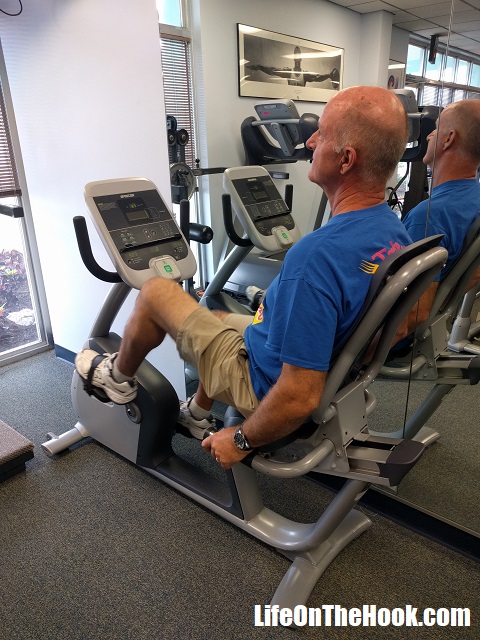 And now it’s been over eight weeks since my surgery. My knee is a long way from being all better, but it’s strong enough that Rhonda and I can head into town for a festival and go to dinner, covering three or four miles in the process. More importantly, I can move around on deck, climbing up and over the dinghy to get to the anchor locker, or down the ladder on the stern to access the swim platform lockers. A few weeks ago I just didn’t have the strength in my left knee to climb around like that. I figure in a few more weeks, it won’t even be that difficult.

My next follow-up with my surgeon is in another week. I intend to tell him that he did such a wonderful job that he won’t be seeing me again. We love St. Petersburg, but we’ve been here way too long. It’s less than three months till hurricane season starts again, and we want to try and do some cruising. So unless it voids my warranty or he sees some major reason why I shouldn’t, we’ll probably push on south and head for the Bahamas for a couple of months. It sounds like a great way to recuperate!