One hundred and seventeen years ago this week, the National Weather Service office in Galveston, Texas received spotty reports via telegraph of possible storm conditions in Cuba. Anecdotal information from ships arriving at the port indicated that something serious was possibly brewing in the Gulf of Mexico. On the morning of September 8th, 1900, the manager of the weather service office noted a falling barometer and a steadily increasing wind. By midnight, between 6,000 and 12,000 residents of Galveston were dead, killed by the wind and surge effects of a direct hit by a major hurricane that no one saw coming. To this day it’s unknown how many ultimately died, as the bodies of the drowned were burned in huge funeral pyres on the beach to prevent the spread of disease from the rotting corpses. There is no count of how many simply washed out to sea, never to be seen again.

Yesterday, Hurricane Irma roared ashore in the Florida Keys as a strong category four storm. Although similar in size and strength to that estimated for the Great Storm of 1900, only a handful of deaths have been attributed to it. The difference is technology. In 1900, there were no weather satellites or remotely monitored ocean buoys. No Weather Channel to provide updates, and no radio to spread the word of approaching danger. Ships returning from sea were the only reliable sources of offshore weather information, which in many cases was days or weeks old by the time they made port. 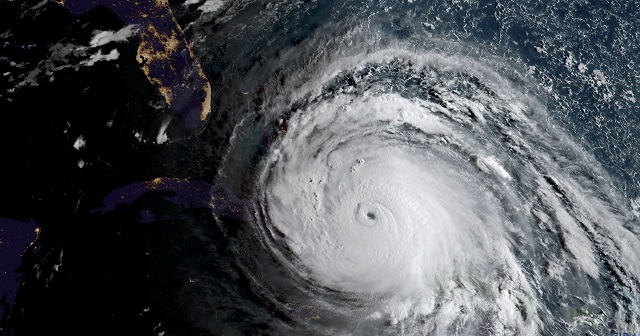 On that fateful Saturday morning 117 years ago, most citizens of Galveston probably awoke and went about their business, completely unaware that by midnight, they’d be struggling for their lives, a battle that thousands would lose. Today we can see a storm before it’s even born, rolling off the coast of Africa as a tropical wave. We can follow it as it forms and develops, predict its path, and observe its impact on those whose lives it crosses. But there is a small downside to this. Thanks to our technology, we now have a week or more to fret, worry, and obsess about what may come. Days of watching stores sell out of water and gas, resupply, and then sell out again. Days to watch shelters open and highways clog as evacuees jam the roadways, fleeing the predicted point of impact. Days to view looping videos endlessly repeating reports of destruction from places already hit, as sandbags are filled and emergency measures implemented in the places that are next in line.

Don’t get me wrong. I’m happy beyond measure that through our technology, we can avoid a disaster like the Great Storm of 1900. But it does take its toll in sleepless nights and high anxiety, waiting and watching, watching and waiting. I’ll be immensely happy when this whole thing is finally over, and everyone we know in the affected areas has checked in as safe.

We’ve been extremely fortunate this time. Hurricane Irma stayed far enough to our east that we only felt some gale force gusts and a few light sprinkles. Since we’re tucked into a slip that sits directly below a three story building, effectively protecting us from the north winds the storm is generating here, we just removed all loose gear topside. We didn’t have to implement our hurricane plan, which would have had us moving Eagle Too to the well protected Bayou Grande Marina at Naval Air Station Pensacola and then evacuating inland. We still had our mooring lines doubled up from our trip to Charleston SC a few weeks ago to see the solar eclipse, and because our mooring cleats have a fair lead and don’t run through chocks (since chocks are probably the worst idea ever implemented on a boat, guaranteeing maximum line chaff during a blow), we didn’t have to add chaff gear. With maximum gusts predicted to be less than 35 knots (about 40 mph), or about what a passing thunderstorm produces, I saw no need to strip the sails, and we didn’t have to collapse our solar panel-covered bimini , as I engineered it to take 50 knot winds (although we did remove our Sunbrella sunshade). 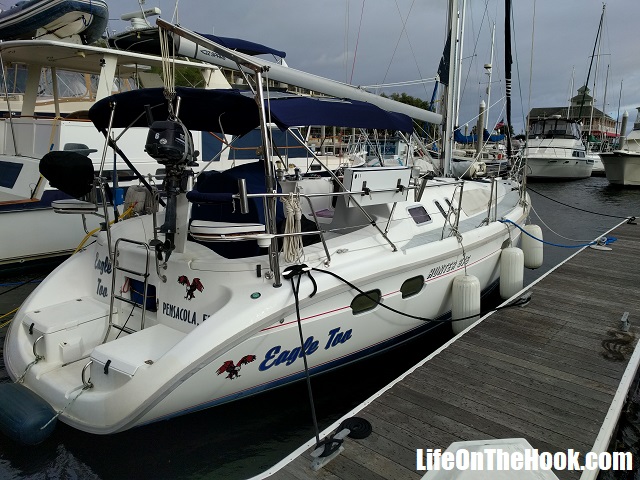 Yes, after a week of following the weather reports, we’re suffering from a severe case of storm fatigue. But we’re very conscious of the fact that friends of ours, people we’ve met in our travels down in the Islands and who keep their boats in places like the Keys, Marco Island, Vero Beach, Bradenton and St Petersburg, would probably trade places with us in an instant. We hope that they and their boats are all well, and that this will be the last time we need deal with such a situation this hurricane season.

Here’s a terrific book I’d recommend about the Great Storm of 1900 if you’d like to learn more about the tragedy in Galveston that occured 117 years ago this week:

Issac’s Storm: A Man, A Time, And The Greatest Hurricane In History