Sometimes when we raise anchor, it comes up coated in thick, black, foul smelling mud. I don’t want the stinky muck to end up in the chain locker, but the only practical way to wash the anchor and chain has been to keep dropping a five gallon bucket over the side with a rope to dip up seawater for rinsing, repeating a dozen or more times until the anchor is back onboard. At eight pounds per gallon, a full five gallon bucket weighs 40 pounds, and my poor back is usually begging for mercy after the first half dozen drops.

We love it when Rhonda can hook a big Mahi or other pelagic fish while we’re offshore. But by the time we finally get the darn thing onboard, subdued and filleted out, the cockpit looks like the shower scene from Psycho. There’s blood spattered from the swim platform to the companionway, and rivers of red run through the cockpit. We can get to some of the mess with our existing cockpit handheld shower, but cleaning the rest requires going back to the bucket brigade.

I’ve known that someday we’d want to install a washdown system so that we could just break out a hose and spray away the messes. Since we usually have plenty of fresh water onboard, I wanted to start out with a freshwater washdown, because it was the easiest to install. All we needed to do was tap into the boat’s existing water system. A saltwater system would have required a new hole in the hull for a dedicated thru-hull fitting (which would have required hauling the boat), and installation of a washdown pump and associated electrical circuit.

Something that made this job a pretty easy one to tackle is the fact that our Hunter (and probably most modern production boats) are plumbed with PEX piping, which is a semi-rigid plastic. The plumbing is put together with Qest fittings, which are just about the easiest, most fool proof plumbing connectors you can imagine. You just cut the plastic pipe and slide on the Qest connector nut, metal collar and compression acorn, and you’re ready to connect up to a new fitting. No special tools or skills required. 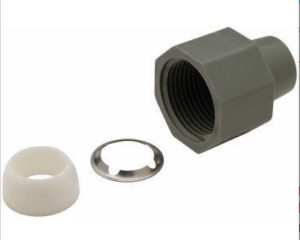 Developed for use in the mobile home and RV market, Qest fittings aren’t something you can usually find in your local Lowe’s or Home Depot. But we can find whatever we need at our local RV dealer, with the added benefit that they’re sold at cheap RV store prices, rather than at a marine store markup. They’re also available from several online sources, such as PlumbingSupply.com.

The first step was to empty out the starboard lazarette in order to gain access to the plumbing for the cockpit shower, disconnect the cold water line from the shower, and cut the line in order to insert a T connector. 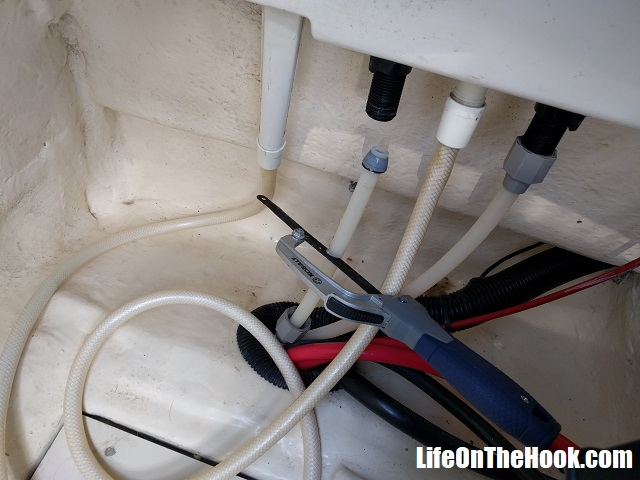 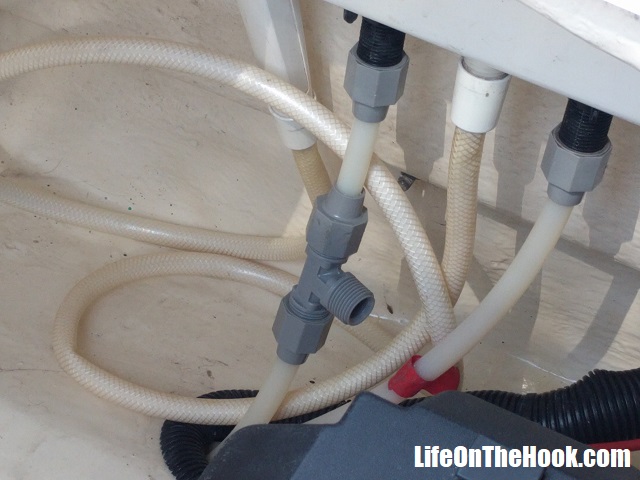 Next I broke out the drill and hole saw, because every good boat job involves making a hole in the boat. I placed the hole where there was enough depth to connect the plumbing, carefully avoiding interfering with the engine stop cable. 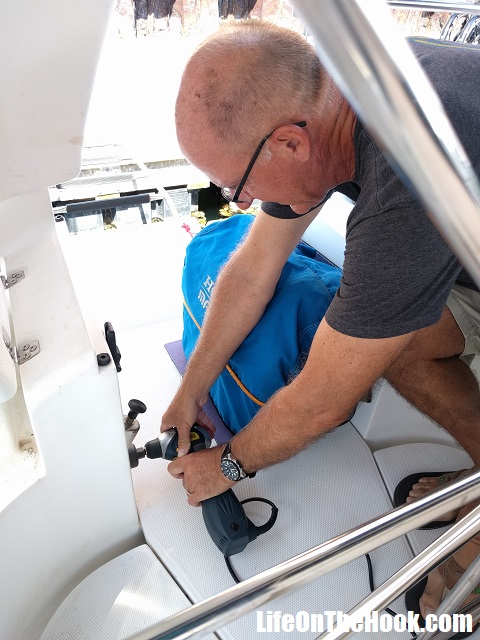 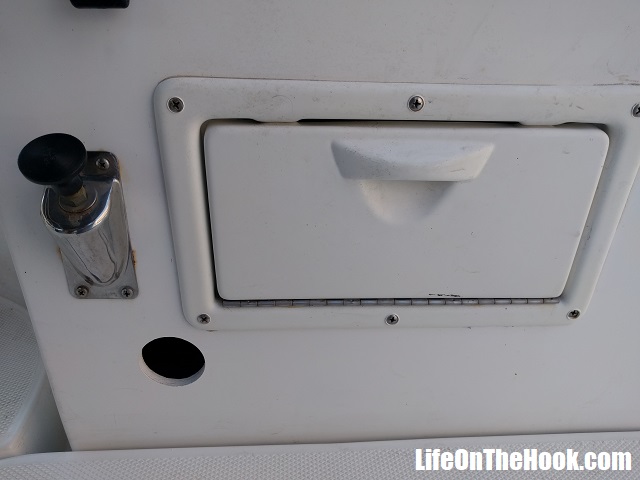 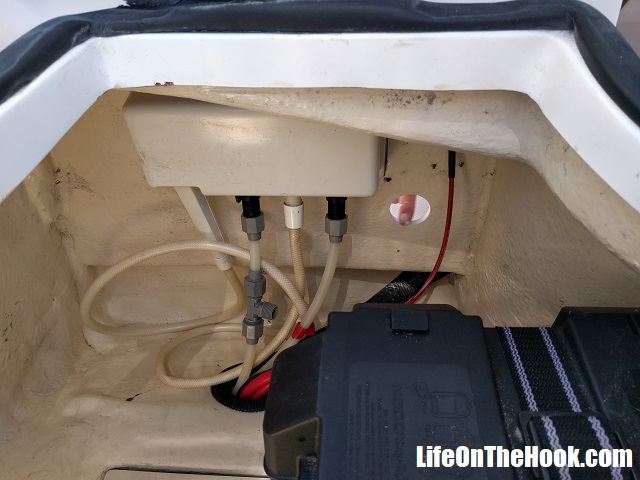 Next I installed a Jabsco washdown quick connect fitting in the newly drilled hole, bedding it with some butyl rubber for a watertight seal. I liked this fitting because it sits flush so that when you disconnect the washdown hose, there isn’t an ugly ankle-knocking hose bib sticking out. 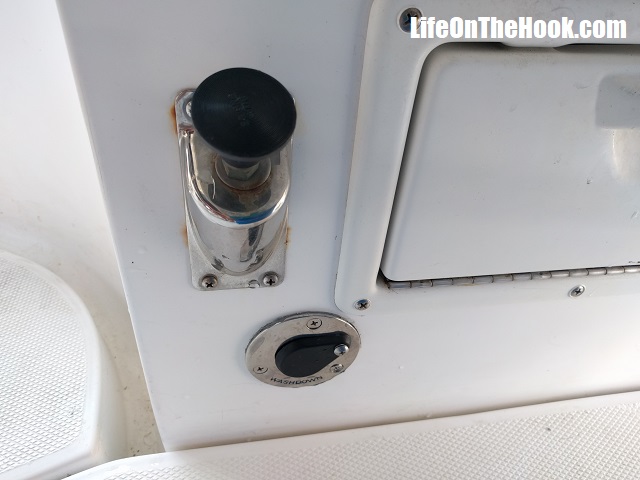 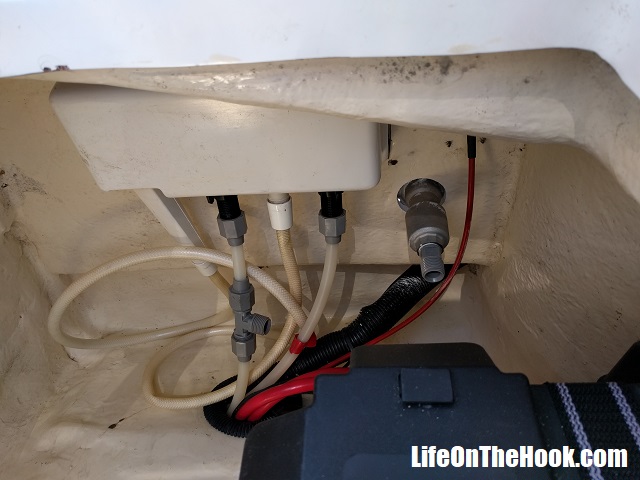 The last step was to use a Qest elbow and a short length of 1/2″ hose with the appropriate connectors to tie the washdown fitting to the newly installed T. 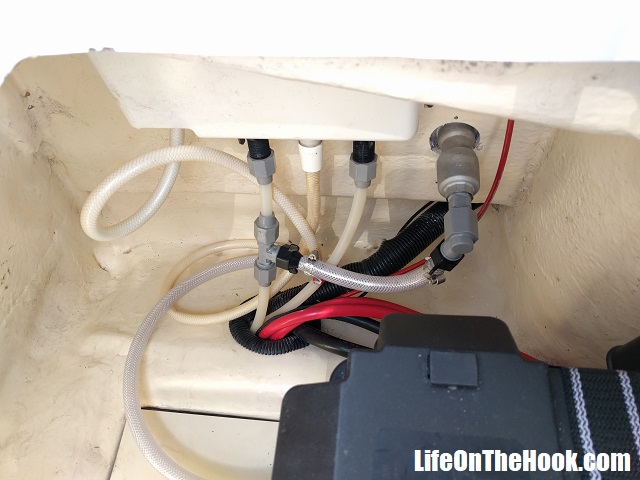 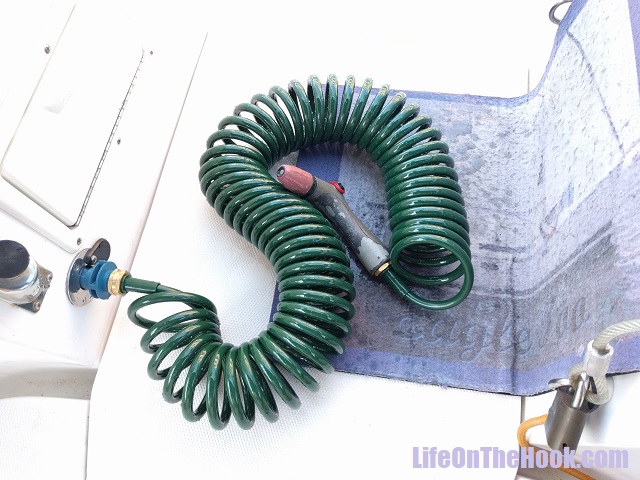 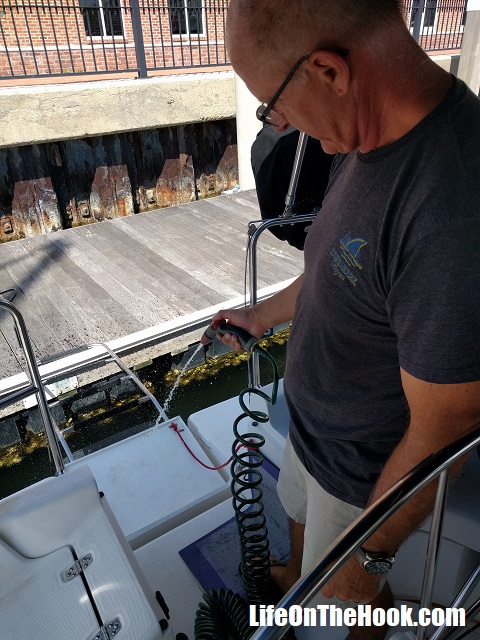 We purchased a 50 foot coiling hose so that I can easily stretch it up to the bow to deal with a muddy anchor. 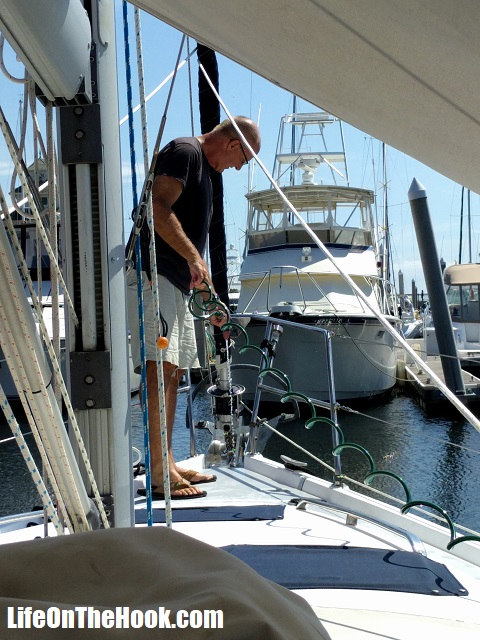 But the hose coils up compactly enough to easily fit in the lazarette when not being used. 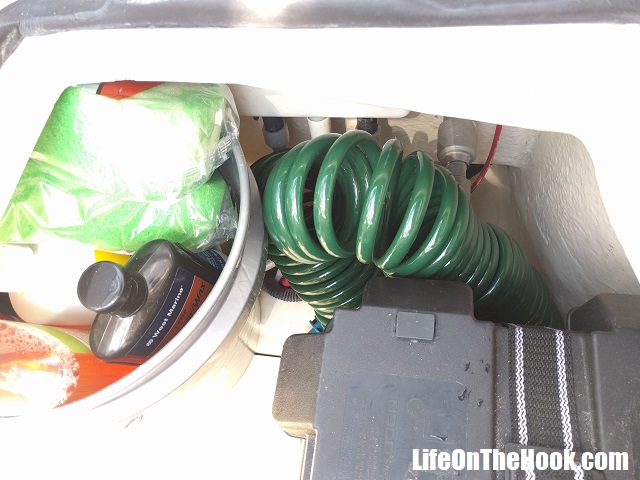 We could probably use a washdown connection at both ends of the boat, but for now I thought we’d just put one back aft since it was the easiest place to access the existing freshwater system. Maybe when the day eventually comes when we’ll have to haul the boat again, we might consider installing a new thru-hull somewhere up forward so that we can add a saltwater washdown system also. 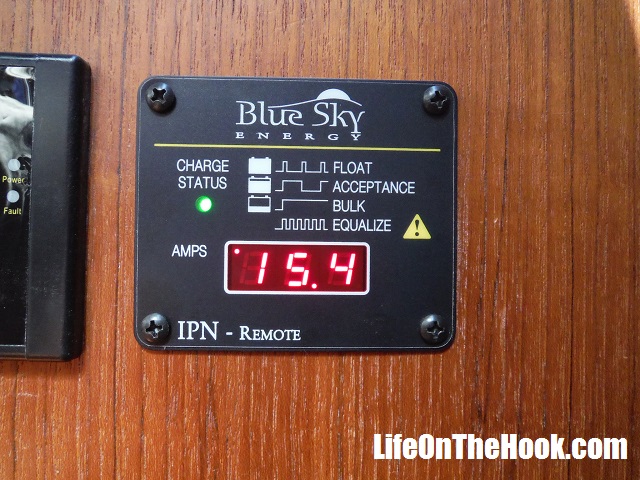 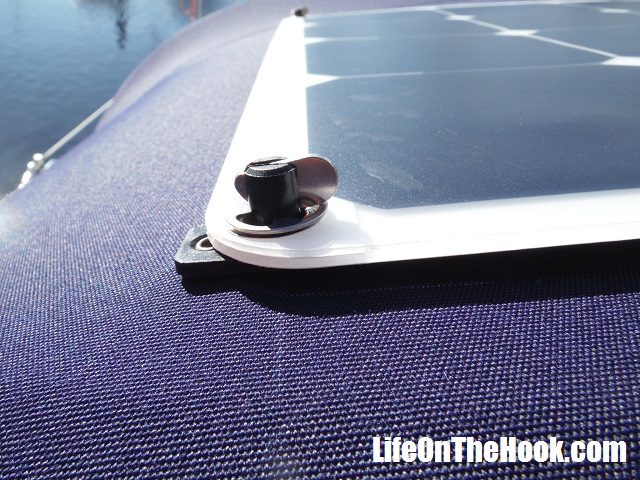 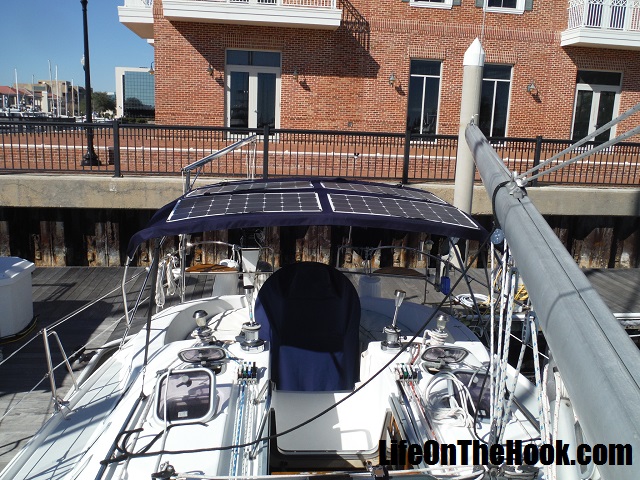 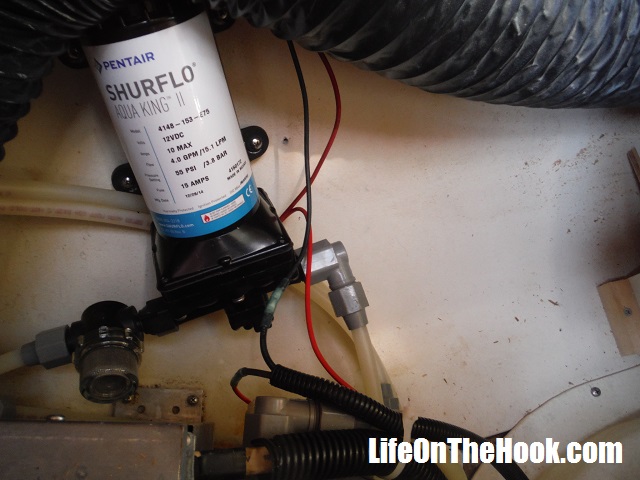 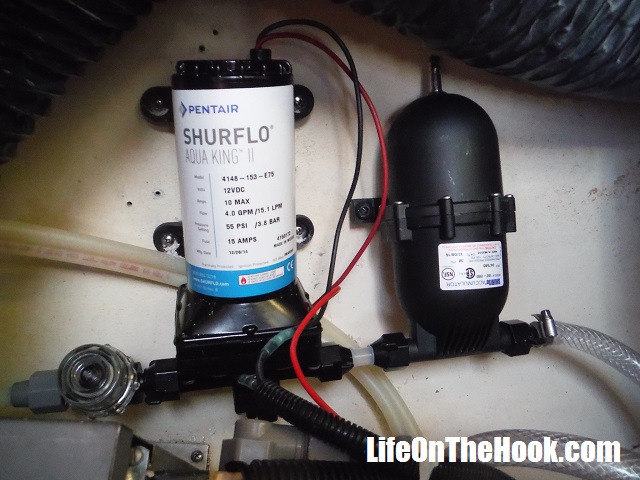