Being back in the land of online shopping and two day delivery gives us a chance to work on some of the things we’ve wanted to upgrade on Eagle Too. Today’s task is the replacement of our really sad, decaying, weathered cowl vents. These things are just a complete eyesore, and like duct tape on upholstery, they just make our boat look shabby no matter how good she looks otherwise. 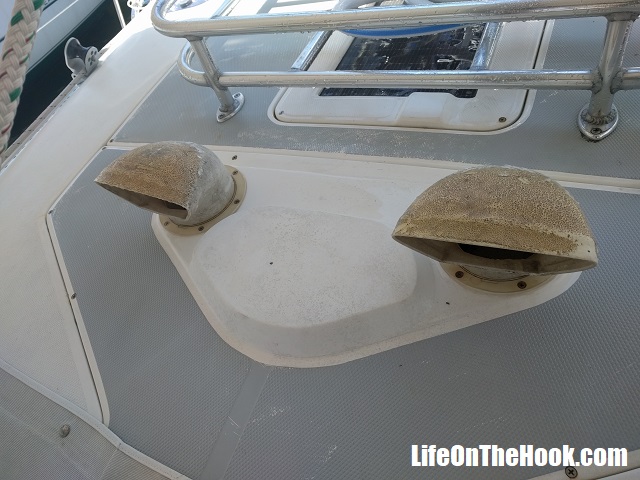 We’ve already replaced these rotatable air scoops once before. But they’re made of soft PVC, and the sun just absolutely destroys them. These were less than two years old, but were so UV degraded that they were actually sticky to the touch. Trying to clean them just resulted in a gummy mess.

Buying another set of PVC vents seemed like good money after bad. But at least they were affordable, at about $80 a set. There are some that are made from stainless steel, and Rhonda thought that sounded like a great idea, until I told her they would cost between $600 – $800 for a pair. We didn’t hate the old vents that much!

Thinking there had to be another option, I kept researching, and found out that Vetus actually makes a line of cowl vents in silicon rubber. Unlike PVC plastic, the silicon is supposed to be impervious to sun and weather, and come with a three year warranty. They’re twice the cost of the PVC vents, but only about a quarter of the cost of the stainless steel ones. I placed the order for a pair.

One of the issues with purchasing anything online is that you can’t touch, feel and take a good look at what you’re buying. When the new cowl vents arrived, we learned that they mounted to a completely different type of deck ring, which was never shown or explained in the product description. I couldn’t use the old deck rings, but the mounting holes on the new ones had a smaller radius and wouldn’t work unless I could make the holes in the deck smaller.

In situations like this, I usually put the job aside and ponder on it a while. After a couple of days, a solution popped to mind. I called Carpenter Tony (our name for him, to differentiate him from Canvas Tony, who does all our canvas work), and asked him if he had any scrap 1/2″ Starboard laying around his shop. In case you’re not familiar, Starboard is the brand name of a marine grade plastic lumber that holds up really well to sun and weather. He had some available, so I asked him to make two 6″ rings for me with 4″ holes in the middle. The next day he called to tell me they were ready. 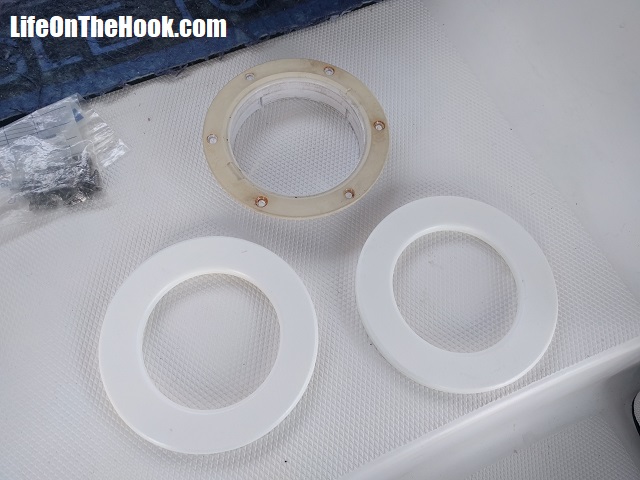 Two new Starboard rings and one of the old mounting rings for comparison.

Taking them one at a time, I removed the first vent and mounting ring… 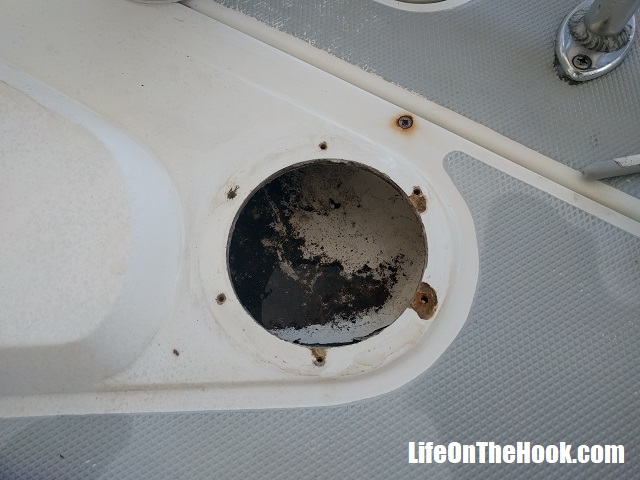 and then cleaned up the 21 years of accumulated gunk that had collected. 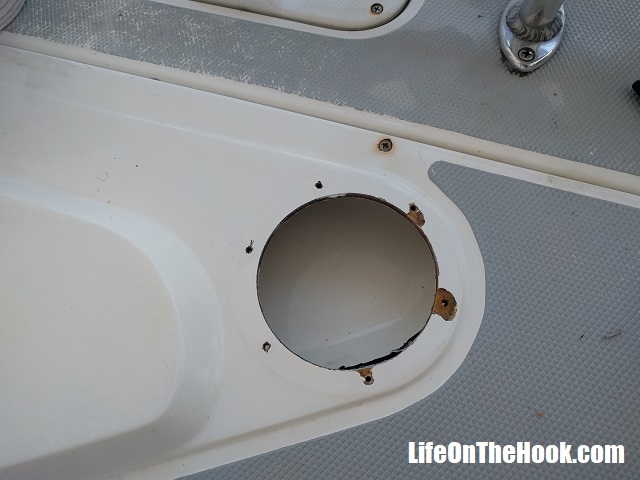 I drilled and countersunk holes in the Starboard ring to match the existing screw holes, applied a bead of silicon, and screwed it down. You don’t really need to seal this, as any water that goes down the vent will drain away, but I thought it would act as an adhesive to back up the screws. 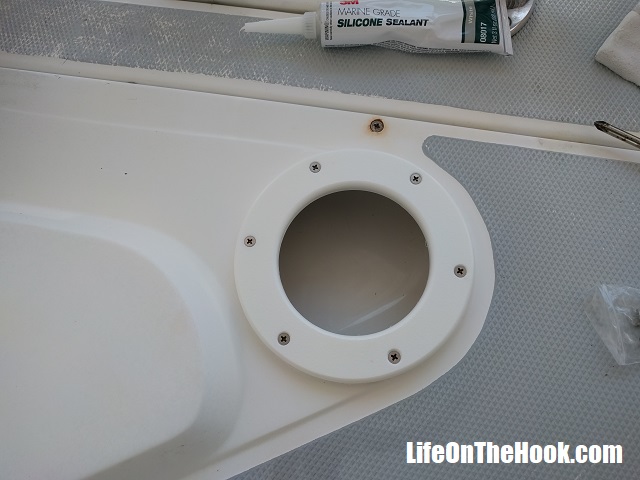 Next I mounted the deck ring for the new cowl vent… 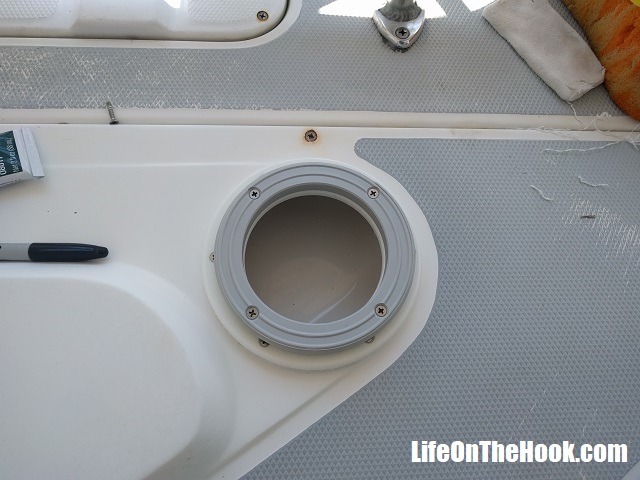 and then screwed the new vent to the ring. 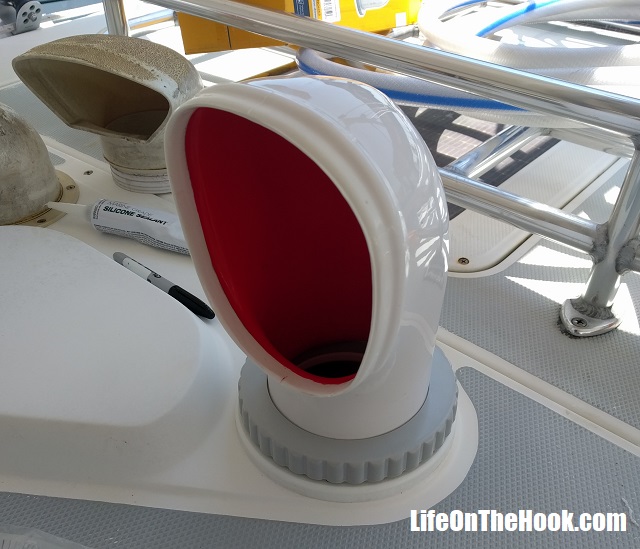 Not bad! Now on to the other side to repeat the process. 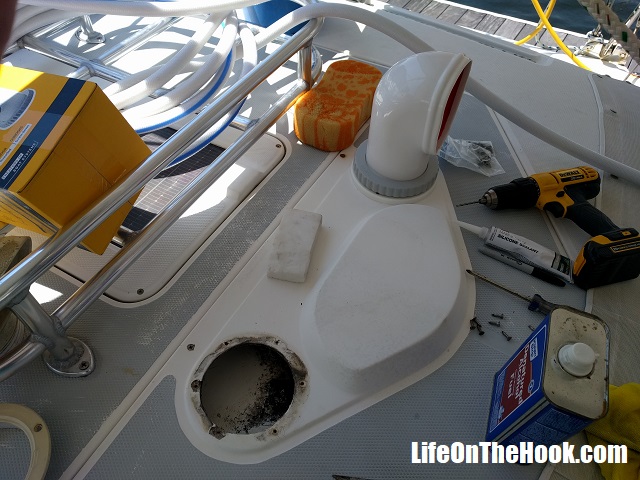 And shortly after that, Eagle Too sported two shiny new vents. 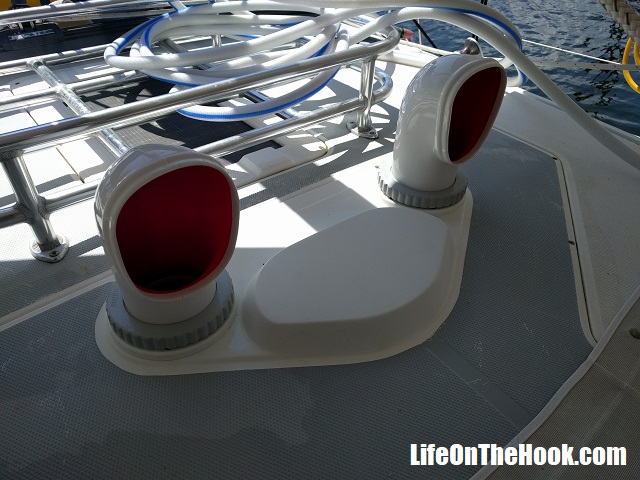 You probably noticed the new vents are more upright than the old ones. I couldn’t find the low profile vents in silicon, and these were the best I could do. But they’re still short enough to not be in the way of anything, and they should probably catch a little more air than the old ones.