“It’s stupid cheaper.” Rhonda chuckled when I said this, so naturally I thought it should be a blog post. The story goes something this:

Our boat burns zincs. They dissolve so fast it’s almost like they’re just shiny little Alka-Seltzer tablets. Our diver is constantly replacing them. Even the huge grouper anode we have hanging over the side and attached to our rigging doesn’t seem to be helping.

Now it’s not our boat’s fault, nor ours either. It’s the marina’s. You see, all the boats here in the marina are plugged into the same shore power electrical system. This means that we’re all electrically connected together through the marina’s safety ground circuit. That’s the green wire in the shore power connection—the black wire is the “hot” wire (the juice comes in), the white wire is the common or neutral wire (the juice goes out) , and the green wire is the safety ground that’s there just in case something electrical develops an internal short to ground. It gives the current a safe way to leave the boat that doesn’t involve using your body as the conductor when you touch the shorted device. It’s actually a good thing to have.

But since everyone is electrically connected to everyone else through this circuit, and we’re all floating in seawater, which does a pretty decent job of conducting electricity, then small differences in electrical potential between boats (caused by something like a submerged wire in a wet bilge with a crack in its insulation) starts stray electrical currents flowing between boats. And we have a lot of stray electrical currents here in our marina. My guess is if we could actually see them, the water around us would look like the Aurora Borealis (OK, that would actually be pretty cool. But it’s not a good thing).

These stray currents flowing in and out of your boat starts to eat away at the underwater metals. Things like your prop, shaft, and through-hulls all take a big hit. To address this, we install sacrificial anodes made of zinc. To the stray electrical currents, the zinc is filet mignon while all the other metals are Brussels sprouts. The current will eat the sprouts if it’s hungry and has no other choice, but give it steak, and that’s what it’s going to gobble up first. We apparently have very hungry currents. Because our zincs vanish in just a couple of months. 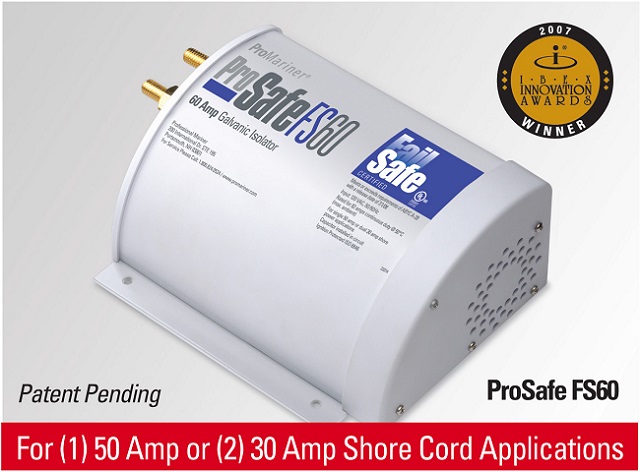 I liked this one from ProMariner best because it can protect two 30 amp shore power lines in a single unit. Since we have dual 30 amp feeds on Eagle Too, this saves the trouble and expense of having to install two isolators.

The way a galvanic isolator works is pretty simple. You cut the green ground wire in your shore power connection and wire it to this device. Inside are a set of diodes that block current flow in/out of your ground wire, severing your electrical connection from all the other boats plugged in to the common ground circuit. Like activating a Klingon cloaking device, your boat just electrically vanishes from the circuit, and the hungry stray current flowing through the system and surrounding water can no longer see you. Your zincs are saved! As are all your other underwater metals. If you do have a circuit onboard that shorts to ground, the diode breakdown voltage is exceeded and they conduct the current safely ashore. There’s also a built in capacitor to carry stray AC currents safely through the ground circuit while still keeping your boat electrically isolated from the other boats.

Now you may be wondering why is it, if this little wonder works so well in reducing corrosion from stray electrical currents, and we live in a marina full of stray currents, that we hadn’t picked up one of these little gems long ago. I was reminded of the reason when I checked the price of the device on West Marine. It’s listed at $414 plus tax. Ouch. A shaft zinc is only $11. You can buy a bucket load of them for the price of prevention. So we said “die little zincs!” and just kept replacing them rather than buy the moderately expensive solution.

But we’re in the final stages of getting ready to leave, and there’s no telling what type of banana republic third world electrical systems we’re going to encounter on our adventure. So it was time to make the upgrade. Besides, now that we’ll be doing the zinc replacements ourselves rather than having someone else do it (that’s one of the reasons we got SCUBA certified, after all), we’ll be saving our own time and labor in the future by not having to keep constantly going under the boat to change zincs.

But $414? Seriously? There must be a cheaper alternative. Checking Defender, my go-to marine outfitter when I’m looking to save some money, I found the unit listed for $379. Better, but still more than I wanted to pay for what’s really just some diodes and a capacitor in a nice looking box. Resigned to having to spend more that I wanted (this is a boat we’re talking about after all), I prepared to pull the trigger. But then the little voice in my head (you have one too, don’t you?) said two little words. “Check Google.”

“Great idea, little voice,” I said, and typed ProMariner ProSafe SF60 into my search bar. And out tumbled a long list of vendors. Most had it listed in the same $375 – $400 dollar range as Defender and West Marine. But then I saw it. A place I’d never heard of called Anchor Express in Stoughton Massachusetts was selling it for only $252. A whole $162 less than West Marine.

“Well that’s stupid cheaper,” I blurted out. And Rhonda laughed. Because she had no idea what was going on in my head (sometimes even I’m not always sure). “What are you talking about?” she asked.

So I explained. Stupid cheaper is when something has such a good price that you’d be a fool to even consider buying it somewhere else due to vendor loyalty or a desire to earn reward certificates  that arrive in the mail and feel like free money (but really aren’t).  It’s not a price that makes you stop and consider, it’s one that makes you go “Duhhhh, this is a no brainer.” It’s so cheap it would be stupid to even consider another option.

Stupid cheaper. Needless to say, our ProSafe SF60 is now on its way from Anchor Express. Because Rhonda and I are a lot of things, but I like to think stupid isn’t one of them. 🙂