While this Life On The Hook™ does provide its share of picture postcard moments, it’s important for any of you who are considering heading down the cruising path to know that every day isn’t straight out of a Jimmy Buffett song. Take today, for example. Eagle Too is anchored off Boot Key in the outside anchorage (just off the town of Marathon), with a beautiful view of the sunsets and the Seven Mile Bridge. 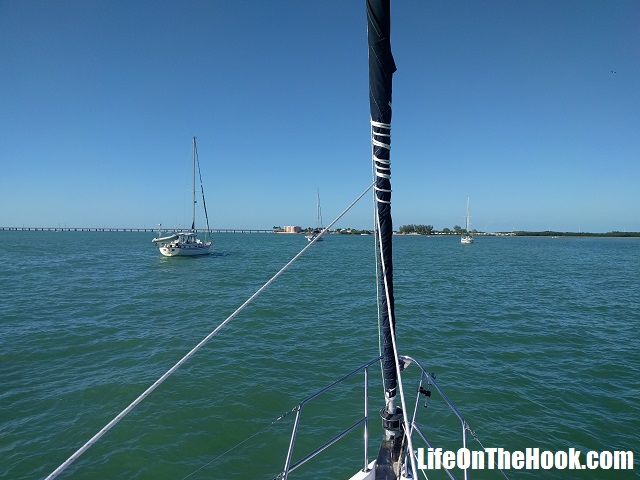 But the anchorage offers no protection from winds from the south through the northwest. Normally this wouldn’t be a problem, as the winds are predominantly from the southeast here, with some north winds when a cold front passes. The past few days have been gorgeous, but today we’re feeling strong southwest winds, and we’re paying the price for our selection of anchorages.  There is nothing except a few reefs between us and Cuba to calm the swells, and two-to-three footers are pitching the boat like a rocking horse. Rhonda and I have spent all day hanging out in the cockpit, because it’s just too nausea-inducing to spend a great deal of time down below, unless it’s flat on our backs in bed.

Why not go into Boot Key Harbor to get away from the swell? Because it’s high season here in the Keys. There’s a 45 boat waiting list for a mooring (which means we’d probably be waiting until May), and the small areas to anchor inside the harbor are packed tight with boats. Many of these boats look worn and neglected, with several feet of sea grass growing from their hulls and sadly soggy partially deflated dinghies sitting awash alongside. I have no confidence that the ground tackle on these boats (anchor, chain, associated shackles, etc.) are any better maintained than the rest of the boat. So I just don’t trust them, and wouldn’t risk our boat by anchoring among them. Better in our opinion to suck it up and stay “outside,” where we can put out 100 feet of chain in 8 feet of water, and have a quarter mile of room to drag before we’d hit anything. Since we were only planning to be here for a few days before heading up the Keys to stage for our Bahamas crossing, it just made sense to hang out here. Besides, we love the sunsets. Just think how much these people paid to enjoy the same view as us… 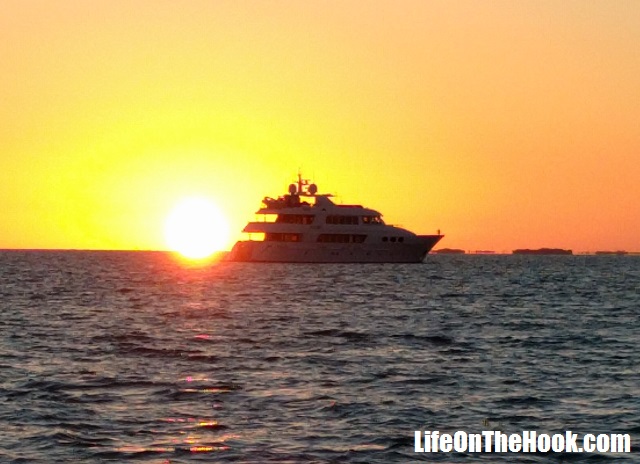 So to cope with today’s conditions, I made of quick batch of Mac & Cheese with diced Spam, and a couple of Bacardi and ginger ales. It’s a great meal for a rolly day, the kind of thing you can just pop down below and give a quick stir occasionally and then go back above before vertigo sets in. 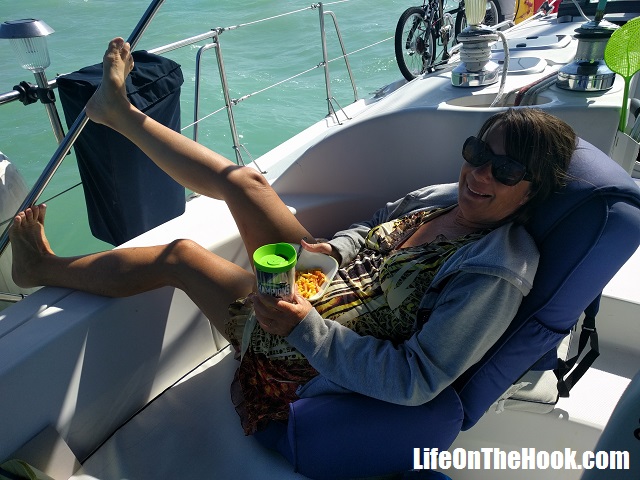 The mix of carbs and protein settles the stomach, while the Bacardi and ginger ales really explain themselves. Meanwhile we’re reviewing our charts and doing passage planning.

We’re currently waiting for a line of thunderstorms to move through the area overnight, which is causing us a bit of anxiety. A storm on the water is always 10 times worse than the same store ashore. But tomorrow is supposed to be clearer and the winds are predicted to shift to the northwest at 15 knots, which means that if we head eastward tomorrow morning, we should actually be able to get in a day of sailing, something we’ve done entirely too little of since leaving Pensacola back in December (it’s been about 85% motoring or motorsailing). Our plan is to go at least as far as Channel Five, with the goal of making it all the way to Rodriquez Key to anchor for the night. Then we want to move on to Angelfish Creek. At that point, we’ll be about 25 miles south of Miami, which means we’ll be perfectly positioned to jump across to Bimini. If the predicted south winds develop over the weekend, we should be able to point the boat due east, and let the Gulf Stream carry us northward towards our destination. We learned during our passage from Cuba to Mexico and then back to Florida that it makes more sense to use a current to move you toward your destination rather than fight against it.

We’ve been working on a post for a couple of weeks that outlines our journey south from St. Petersburg to the Keys. We’ve made the trip three times now (twice south, once north), and we definitely have our opinion on places to stop along the way. I still intend to finish it, but truthfully, there just aren’t enough hours in the day to soak in all there is to enjoy and also spend a couple of hours hunched over a computer. When the writing starts to remind me of work, I just stop. Those of you who follow us on Facebook have seen our regular updates, and if you’re interested in monitoring our progress, we strongly suggest you like our page. Our internet access has been pretty spotty since leaving Marco Island, and we’re relying primarily on cellular data now, so it also saves us data to throw a quick picture and a few words on Facebook rather than maintain our blog site.

With a little luck, our next blog post will be from Alice Town on Bimini Island. That’s all for now, Eagle Too out…