We’ve noticed that one of our more popular posts here at Life On The Hook has been our first-look review of the AMC Back Bay folding bicycles we bought at West Marine 18 months ago. To help out anyone who may be considering purchasing one or more for themselves and who may come across our site while Googling reviews, here’s a look at where things stand after 18 months of life in a marine environment. 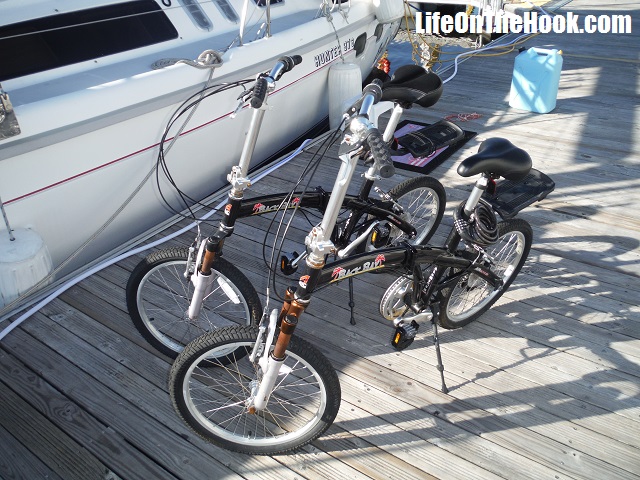 First, the good news. The bikes are still doing their intended job, getting us around town to stores, bars, restaurants and local attractions. Now that we’re back in the very bicycle-friendly city of St. Petersburg, we’re using them almost daily, and we peddled the heck out of them when we were down in Marathon in the Florida Keys. And people will often say “nice bikes!” to us as we ride by.

One thing we changed almost immediately was the stock seats the bikes came with.  After a few longish rides, I was noticing the narrow, hard seat was causing some, ahem, discomfort in places where I’d rather not be feeling pain, and Rhonda didn’t particularly care for the way hers felt either. So both bikes now have cruising saddles with wider seats and spring suspension for a more comfortable ride. Mine also has the anatomically correct (and pretty darn important) furrow down the middle to relieve pressure on certain essential nerves. We also added some small LED lights to make riding at night a bit safer.

In the so-so news department, we learned that while the bikes are mostly made of aluminum and stainless steel, they actually snuck in quite a few mild steel parts. A lot of the nuts and various fasteners, while still doing their jobs, are getting pretty rusty. And it turns out that most of the front forks have turned a deep copper color due to corrosion, and the front suspension tubes have to be regularly sprayed with penetrant and lubricant or else they just seize up. 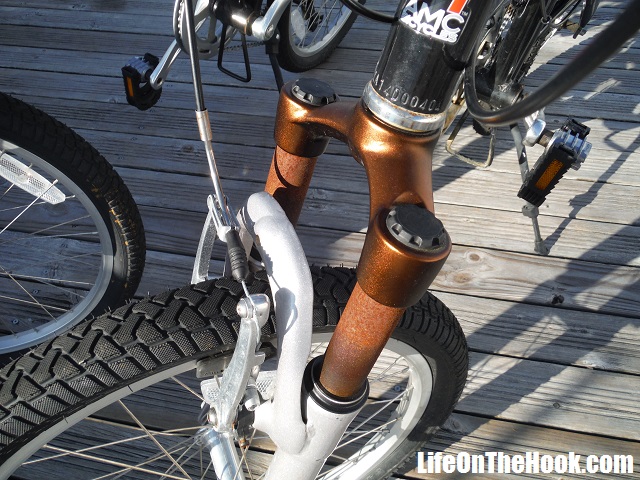 Now the bad news. The biggest problem has been how totally unsuitable for the marine environment the original bike chain and brake/shift cables are. When we first set out to cruise full time, we stored the bikes folded in storage bags lashed to the lifelines. This keeps the sun off them, but it unfortunately traps moisture, which viciously attacks the steel parts. When we broke out the bikes in Marathon, the chain on Rhonda’s bike had corroded into a flakey clump of rust, and I had to work through the chain link by link with pliers and penetrant to get it to function. Once we returned to Pensacola, the gears on both bikes froze, refusing to shift any longer. It took two days at the bike shop to get them back on the street. The shop replaced the galvanized shift cables with stainless wire, added full-length cable sleeves in place of the partial sleeves the bike had originally, and fitted new, corrosion resistant chains. 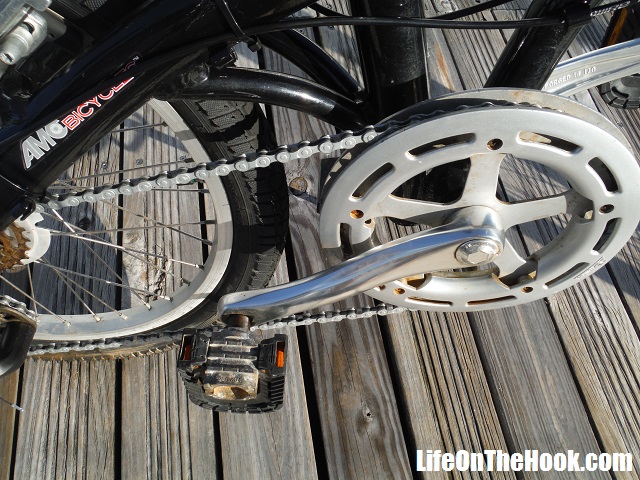 We decided when we headed back out last December for the next leg of our adventure that we’d just store the bikes on deck sans bags. We remove the seats to store below and collapse the handlebars, and then just bungie cord them to the lifelines. They’re exposed to the sun every day, but we’re hoping that regular fresh water rinsing from rain or a dock hose and having the chance to dry out more often will slow down the rust. 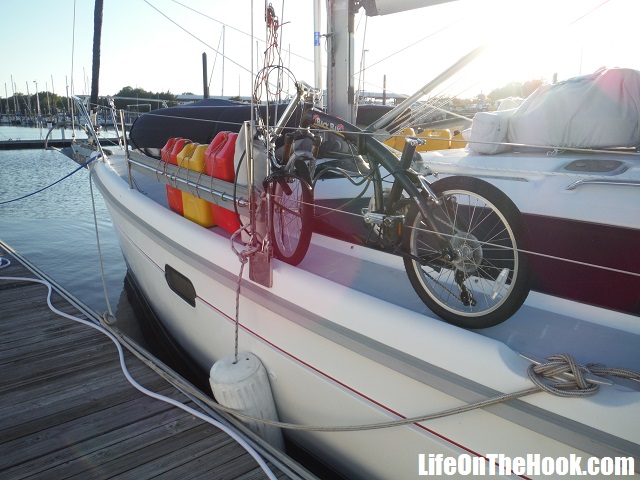 So 18 months later, our Back Bay folding bikes are still serving our needs. But we’ve had to spend an amount equal to the original purchase price on upgrades and repairs to keep them functioning. We’ll still recommend them, because after all, a boat is a pretty harsh environment. Just be aware that you’re going to have to do some upgrading if you want them to go the distance.