Rhonda and I had just finished dinner and were sipping some wine in the cockpit, enjoying the cool stillness of the early evening, when a commotion at the end of our dock caught our attention. Moments earlier, we’d watched as Born To Run, one of those colossal and ridiculously expensive sport fishing boats favored by those with an overabundance of wealth, had glided into the marina (much too fast in our opinion, but then no-wake-zones are for the little people), spun around, and side-tied to the end of our dock. The group of loud young men onboard were now struggling to get something off the boat and into a dock cart. Finally succeeding in their task, they wheeled the loaded cart past our stern, and we saw that it contained a really big tuna. Probably the largest we’ve ever seen.

“How big is he?” Rhonda asked the young man pushing the cart.

“166 lbs,” he replied, as he wheeled the cart toward the dockside fish-cleaning station.

We followed the gaggle of fishermen to watch them clean the huge fish. One carved large lengths of flesh from the carcass, and slid them to another to cut into thick red steaks. 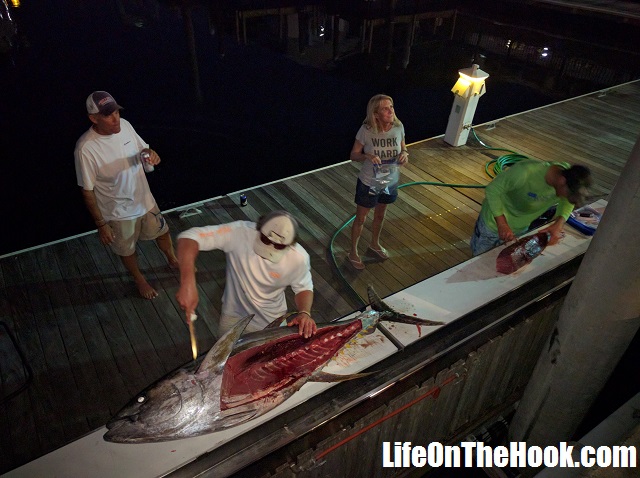 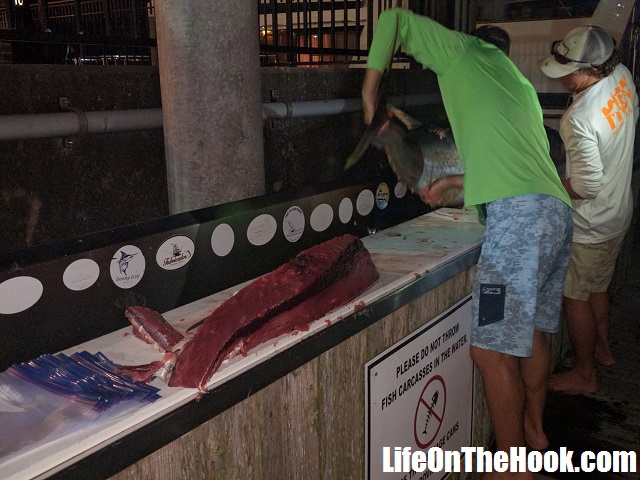 A small crowd began to gather, watching from the porch of the restaurant above. “How far out did you catch him?” someone asked.

“About 120 miles,” an older gentleman standing to one side quietly sipping a beer replied.

“Wow. How much fuel did that take?” I asked.

Yikes. At current prices, that’s probably at least 1,200 gallons of diesel fuel. For a single tuna. Oh well, spend it if you’ve got it, I guess. Help stimulate the economy, and all that.