I don’t know why I happened to browse our local RV dealer’s web page a few weeks ago. It’s not something I’ve been prone to do. Spend hours every day searching Yachtworld waiting for new listings or price drops on a boat that could replace Eagle Too? Yep. But surf RV listings? Nope, not really a thing for me. Perhaps it was out of discouragement after our recent boat-hunting trip to central Florida, where everything we saw was either stupidly overpriced or so sadly neglected that we wanted to call the authorities to relieve the owners of their parental rights so the poor thing could seek care at a shelter for abused boats. Regardless of the reason, one bright Thursday morning in late January, I decided to take a quick look at local RV listings just to see what might be available. And up popped this—good price, pretty low mileage, and darned handsome, as such things go. 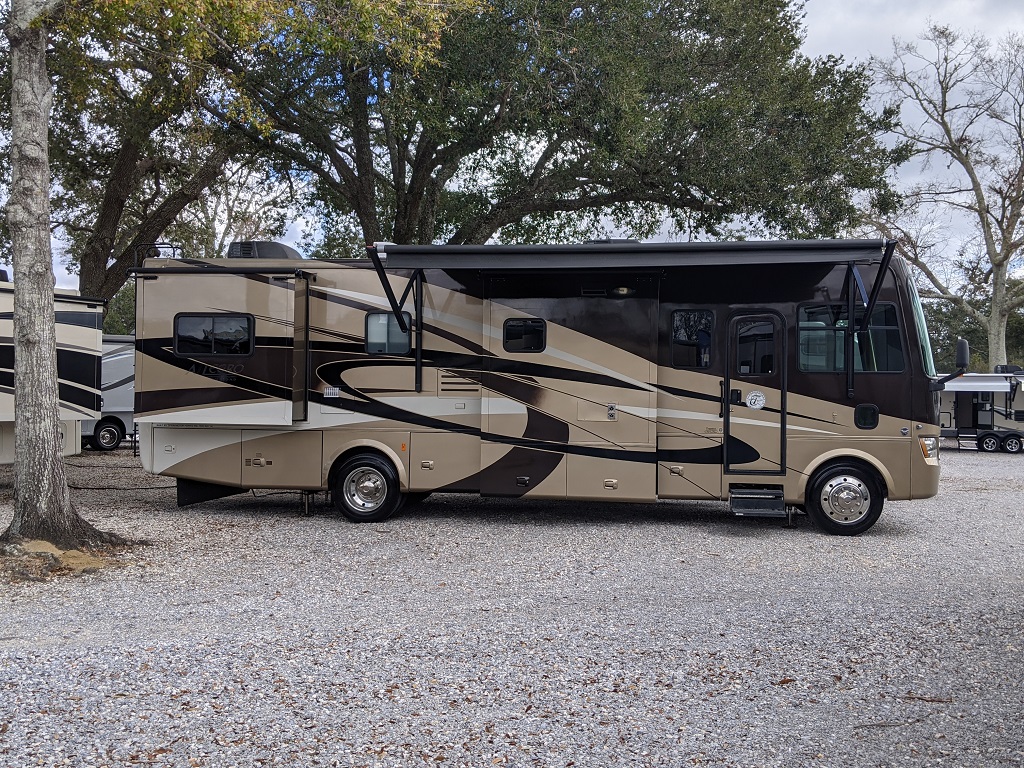 On Saturday, Rhonda said “Let’s go into town and run some errands.” I said, “OK dear, and while we’re out, let’s pop into Carpenter’s Campers and take a quick look at this motorhome I saw on their web page.” After 41 years of marriage, she’s pretty used to my just dropping idea bombs out of thin air into her lap. So off we went.

A hour or so later, we were sitting on the sofa of a 300+ square foot land yacht, marveling at the creature comforts. Things like dual gas furnaces and gas/electric hot water, which would mean no more shivering while underway. An onboard generator to run the dual air conditioning units in the summer. An ample number of cabinets and lockers on both the inside and the outside that would devour all the “stuff” we like to travel with.  A bed that takes regular sheets and a shower that actually looked like a shower instead of a weirdly shaped phone booth, and a toilet that flushed without having to be hand pumped. This was a level of comfort leagues beyond anything we had lived with in our waterborne life.

The conversation went a little like this: “What do you think?” I asked. “This is really nice,” Rhonda replied. “I guess if the idea seems appealing, we could start looking around more,” I said. “After all, this is the first RV we’ve looked at seriously.” But then I added, “I can’t imagine finding anything else though that would suit us better.” “I think you’re right,” she replied. The coach just exuded quality and showed the care the previous owners had given it. And I’m pretty sure Rhonda said it hugged her.

We talked about the things we could go see while cruising in a land yacht. I did a little research into the make and model and how much it would cost to insure. We slept on it.  And the following Monday, we bought it. We’ve named her Terra Aquila. And now that she’s a part of the family, we’ll be charting a quite different course. Too many people know us as Life On The Hook, and I don’t really want to part with the name. But rather than writing about the cruising life, we’ll now be focusing on learning to RV from a sailor’s perspective. I’ve already had a few “well on a boat, it would have been done this way,” moments, with I’m sure more to come. I’m hoping some people will find insights into the transition from water to land cruising informative.

Which brings me to the title for this post. We’d soul-searched for months about trying to figure out our next step after losing our beloved Eagle Too. I’ve said in the past that at certain critical moments in our lives, we’ve been very lucky, as the right opportunity has seemed to present itself at just the right time. And I’ve written about how I believe that luck is actually the result of opportunity meeting hard work and adequate preparation. In this particular case, I have no idea what prompted me to look at RVs on the internet that day. It could be a crazy coincidence that someone had just traded in what is probably the perfect motorhome for us at this moment in our lives, so that I could see it when I looked. Or just maybe, God whispered in our ear that this was the path that we’re supposed to now take. In any event, I hope the friends we’ve made along the way continue to follow along as we embark on this next chapter of our lives.