I know you’ve heard that old saying. But it’s not always true. Two months ago, on October 15th, we signed over ownership of Eagle Too. It was a profoundly sad event. So sad, in fact, that it left us broken, to the point where it’s only now that I can begin to write about it in any detail.

After surrendering ownership of our beloved boat, Rhonda and I stopped for a beer and a bite to eat. “To Eagle Too,” I said past the lump in my throat. “To Eagle Too,” my wife replied hoarsely, as we clinked glasses. We both wiped away tears. It was five full minutes before either of us could speak again.

If you follow us on Facebook, you’ve probably heard the story of how this came to be. It was hurricane season. It comes every year about this time. Things seemed to be going pretty well this year. There were a lot of storms, some close calls, but nothing that forced us to storm-prep the boat or put the hurricane shutters on the house. The weather guessers seemed to be doing a really good job with their models, accurately predicting the path of each storm that headed our way.

And then came Sally. Sally was different. Different in a way we hadn’t seen before. Sally paid no heed to her predicted track. She had a mind of her own. And she caught us all by surprise, every single one of us. Forty-eight hours before landfall, she was supposed to hit New Orleans as a Category 1 storm. That’s 200 miles away, which is far enough to practically ignore. But then she started wandering. And strengthening. A move to the east. Then back to the west, then our way again. Twenty-four hours before landfall, it started to look like she might pass pretty close to us. By that point, it was too late to do much more than check Eagle Too’s dock lines and remove a few deck items. The winds were already gusting into the 30’s, which would have made it dangerous to try and remove the sails and solar panels. We crossed our fingers and hoped for the best.

On September 16th at about 1 in the morning, the eye of hurricane Sally passed directly over us as a major category 3 storm. The power went out and we lost some shingles, but the house did fine. It was Eagle Too that had us worried sick. We’re 25 miles from the marina where we kept her, and the roads were impassable in Sally’s immediate aftermath.

Friends at the marina who unbelievably stayed on their boat to ride out the storm notified us at 9PM, a few hours before landfall, that our girl was doing fine, holding her own. But the next morning, about 10AM, we received word that she was gone. Winds at the marina had topped 100 miles per hour, a piling Eagle Too was secured to had broken, and she thrashed against a pier until it punched a hole in her side and she sank.

Since the storm, we’ve dealt with salvaging what we could once she was refloated, said our goodbyes, and settled with our insurance company. She’s theirs now. We’re trying to decide whether there’s another boat in our future. We don’t feel like we’re done with voyaging. We still hear the call of the islands in every steel drum or reggae tune. But maybe it’s time to consider an RV and go the land yacht route instead. We’re probing our hearts and examining our options. Stay tuned.

We asked ourselves in the aftermath what would have happened if we hadn’t bought our house last year. When we lived on Eagle Too, we kept her in a marina downtown. That marina was completely destroyed by the storm. Almost every boat there was sunk or damaged. We would have probably been left homeless. I guess things happen the way they do for a reason.

Some friends and family asked if there wasn’t any way we could have salvaged her. There was no reasonable possibility. She sat submerged in salt water and a toxic brew of diesel fuel, battery acid and sewage for 10 to 12 days. Not only did it completely ruin everything onboard, it penetrated into inaccessible areas below the deck, above the headliner, and behind the bulkheads. Repairing her would have meant gutting her out to a bare hull and completely rebuilding everything onboard. It would be 10 times cheaper to just buy another boat.

I know there are folks who have followed this blog from the beginning. I wanted to write Eagle Too’s final chapter so that we could all have closure. I didn’t want this to be one of those cruising blogs that just stops for some unexplained reason. Every story needs a conclusion. I’m not saying there won’t be more to Life On The Hook. For instance, there are lessons and knowledge I still want to share that others might find interesting or helpful. I’ve even toyed with the prospect of taking these hundreds of posts and condensing them into a book. A guide to help others who might be considering selling everything, moving onto a boat, and following their distant star. Afterall, our experience isn’t THE way to go cruising, but it certainly is A way, and there’s probably benefit in sharing that.

We’ve also started looking at Yachtworld and Boattrader listings, just to see if there might be something out there that appeals to us. We’re actually leaning toward a modest sized trawler. We are and will always be sailors at heart, who live for that moment when you haul in the sheet, cut off the engine, and silently ride the wind. But anything we buy in the future I hope to enjoy for at least the next eight to ten years, which will take us to an age where strength and agility diminish. Better to plan for that by buying a boat more easily driven than be forced ashore by the diminishment of age.

Toward that end, we had already been considering selling Eagle Too, and had recently cleaned her up to take some glamour shots for a possible For Sale listing. I’ll conclude by showing you some befores and afters , so you can see for yourself the impact Sally had. Each pair of pictures is taken from approximately the same location onboard, a month or so apart. 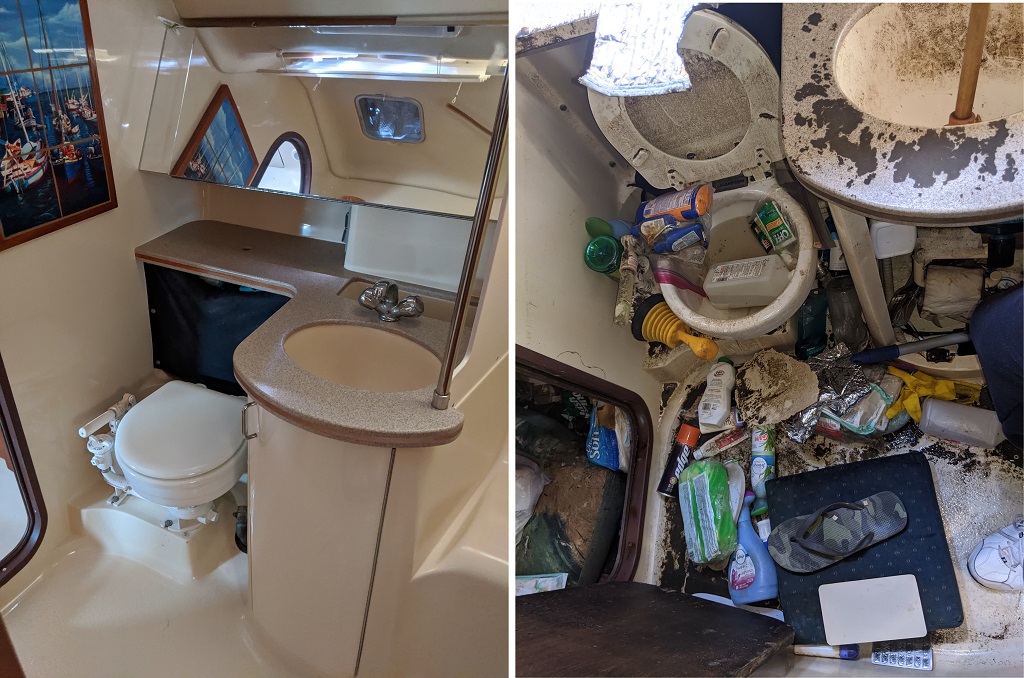 4 thoughts on “Every Story Deserves An Ending”