We recently had some friends join us onboard Eagle Too, and we were pleased when they commented that our boat didn’t smell like a boat. If you spend much time around boats, you’ll notice pretty quickly that an alarming number of them present a mild to major diesel fuel and sewer aroma, often with a pungent stagnant bilge finish. After purchasing Eagle Too, we worked extremely hard to eliminate the sources of any smelly smells onboard, and after solving those, we’ve tried to keep up on the little routine things that help keep funk at bay.

After tackling and curing diesel fuel and engine smells and head odors, and creating a dry bilge to eliminate swamp smells, we’ve found that there are a few other things that need to be attended to if you want to keep your boat smelling as fresh as possible. One of these is the condensate drip pan for the air conditioning system. In Florida in the summertime, the air conditioning runs probably 12 hours or more a day, in the process producing gallons of condensate. While we have plumbed our drip pan to an enclosed shower sump to be pumped overboard, the pan still gets a bit slimy with muck, which would undoubtedly smell unpleasant if we didn’t do anything about it. So whenever we’re onboard, we try to remember to drop a couple of these little tablets in the pan before closing up the boat to leave. 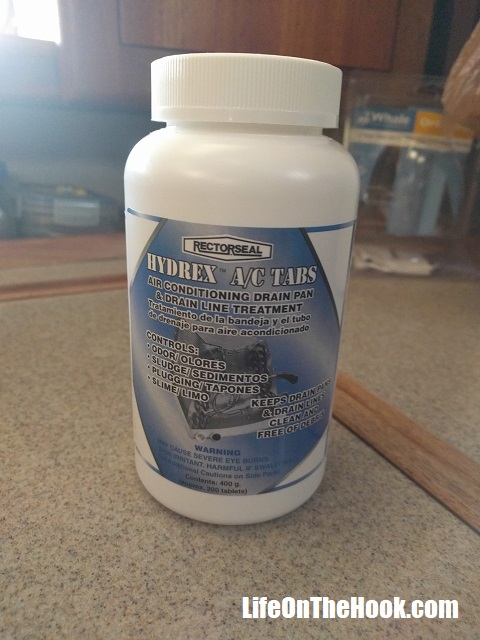 We bought them on Amazon, they’re pretty cheap, and a bottle probably holds at least a year’s supply, perhaps more. Plus they’re handy to have around, because you should probably be using them at home as well in order to keep the condensate line clear on your air conditioning system. After all, one little clump of gunk plugging the line is all it takes to shut your AC system down, or even flood your home if your system doesn’t have a condensate level sensor.