Cruiser’s diamonds. That’s how some refer to those little nuggets of frozen water that put the chill in ‘Chillin’ with a Sundowner.’ While a ten pound bag of chill is available for a couple of bucks in almost any marina in Florida, the price climbs rapidly the further from the US you get. Six to eight dollars a bag is pretty common in the Bahamas, and in Cuba, when we could find bagged ice, it often smelled like fish.

When we’re out cruising and living Life On The Hook™, once the ten pound bag is gone (all we have room for), we’ve been limited to the small quantity of ice balls that Rhonda can make in our freezer. Sometimes we’ve gone weeks with our daily production of concentrated cold only allowing a single cool drink for each of us per day. Every piece of ice was valuable, and almost as rare as diamonds.

We’d always just roll our eyes when someone on another boat (usually a big trawler with a generator running 24/7) would say “Oh, we have an icemaker onboard.” Can you even call that cruising? I mean, learning about what you can do without is a big part of adopting and adapting to this lifestyle of being a maritime gypsy.

But Rhonda and I were having some cocktails with Beth and Stephan on S/V Cattywampus recently, and noticed that they weren’t shy about sharing their store of this most precious resource. Every round of drinks came with an ice refill. “No more ice, I don’t want to run you out,” I said. “It’s OK, we’re making more,” they replied. “Show me,” I said. After all, this was a sailboat we were drinking on, and not many sailboats in the less than “Oh my God you’ve got to be kidding me” price range come with something as exotic as an icemaker.

Stephen pointed to a small countertop appliance. It wasn’t much larger than a four-slice toaster. But it was producing enough cruiser’s diamonds to keep four people in cubes all evening.

We already carry a few countertop appliances on Eagle Too that many cruisers would consider superfluous, such as our Foodsaver vacuum sealer and Gourmia electric pressure cooker (both of which deserve their own Galley Notes blog post). But they’re small enough to store on shelves or in lockers, and their advantages outweigh the inconvenience of finding an onboard home for them.

Surely something as important to crew morale and the general welfare as a reliable supply of ice to chill beverages deserved a place in our equipage?

We were walking the aisles of Home Depot a few days later, and what of all things did we happen to see but a big stack of Magic Chef countertop icemakers on sale for $89. Since the seed had already been planted and had some time to sprout, it only took us about 30 seconds to say “it’s a sign!” and decide to take one home.

So now we can mine our very own diamonds, pretty much whenever we want! 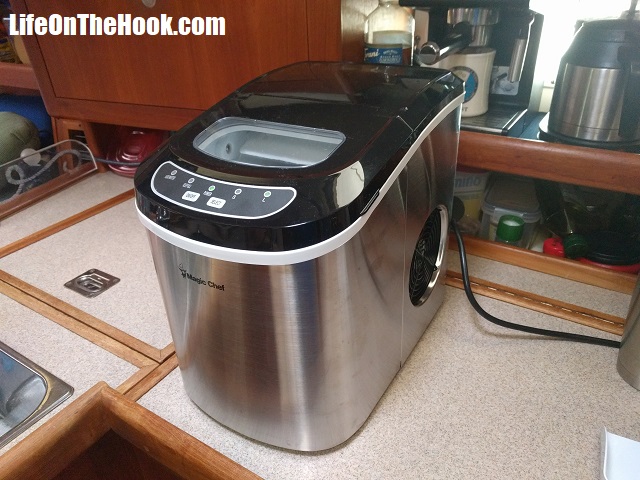 Here’s the lowdown on operation. I couldn’t find a wattage rating on the box in the store, but when we returned to Eagle Too and unboxed the icemaker, the UL tag on the back said it uses 650 watts continuously, and 800 watts while birthing new cubes. That’s pretty much ideal, because our 50 amp battery charger uses about the same amount of power. When we redesigned the electrical system on Eagle Too, I settled on a 50 amp battery charger because I knew our Honda EU2000i generator (2000 watts surge, 1600 watts continuous output)  could easily power it while still having about 800 watts left for other uses. So this means that next cruising season, when the occasional need arises to run Genny (our Honda’s name) to charge our batteries, we’ll also be able to plug in the icemaker and replenish our supply of cruiser’s diamonds.

Since buying the unit, we’ve run it about every third or fourth day, and it has made all the ice we use onboard, saving us a few dollars over buying bagged ice. It takes eight minutes per cycle, with each cycle producing nine cubes. Well, more like hollow cones, but you know what I mean. It makes about a pound an hour, compared to probably the pound a week we were averaging making ice balls in our freezer. 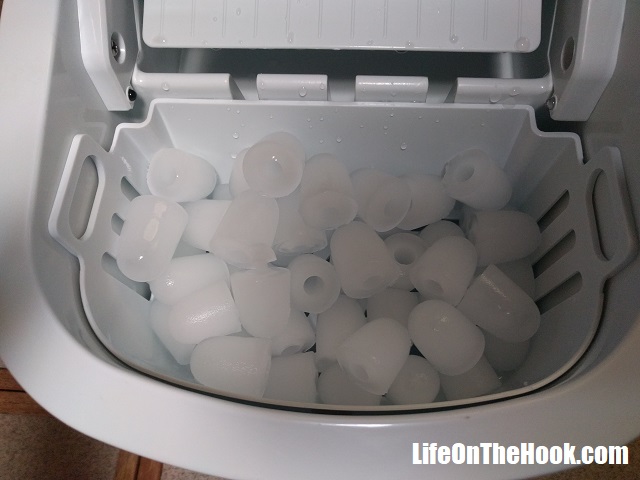 Will it turn out to be a good decision? We’ll see. Something we currently carry onboard will probably have to be left behind next season in order to make room. But as we gain more experience, we’re constantly adjusting our list of what’s essential and what’s not, so we’ve probably made enough space due to things we’ve already taken off the boat this off-season. Also, I’ve heard stories that these units only last about 8 months to a year in continuous use. That will be disappointing if it turns out to be true, but then again, every season we have to buy replacements for something (or several somethings) that we expected to last for years, but barely made it through a single season, like power cords and solar lights, or fuel cans and dinghy paddles, to name just a few. So if we get a year’s worth of reliable diamond production out of it, we’ll probably be happy.

One last comment before wrapping this up. The icemaker we bought was branded Magic Chef, and it has a sturdiness about it that I like. We were recently in Sam’s Club and saw a stack of no-name icemakers of similar design for the same $89 price. But when I examined one, it had a cheap and flimsy feel about it that totally turned me off. I wouldn’t have been at all surprised if one of those bit the bullet within a year. I’m hoping ours is a bit better quality.