Two thousand seventy-nine nautical miles traveled. Three hundred thirty-four hours spent motoring.  Two hundred twenty-three gallons of diesel fuel burned. Six hundred gallons of seawater turned into fresh water for drinking, cooking, bathing. Over a dozen islands, Keys and Cays visited. A mainsail repair, a broken topping lift, a deflated dinghy air deck. And of course, a shattered kneecap. But on June 15th at 9:20 AM, we tied up to the fuel dock at Palafox Pier & Yacht Harbor in Pensacola, Florida, and our 2017/2018 cruising season officially drew to a close.

It’s been a hell of a season. We made new friends, faced new challenges, visited new places, took thousands of pictures and created some wonderful memories. But for the next four or five months, we’ll be waiting out the bulk of hurricane season here in our hometown. The time won’t be idle. After over seven months away, Eagle Too is dirty and a little tired. We’ll be spending a lot of time in the weeks and months ahead cleaning, repairing, upgrading. Getting ready for our next season of cruising and whatever adventures life has in store for us.

Eagle Too and her crew have so far traveled over 6,500 nautical miles, with many more hopefully still to come. For those of you who have traveled with us on some or all of that journey, either in person or virtually via this blog, we’re glad to have you along and we hope we’ll stay connected in the future. While we may not be actively cruising over the next few months, we plan to try to write more about our cruising experiences and lessons and sharing useful info for those who may be preparing to follow in our wake. After all, it’s not pictures of pretty sunsets that prepare you for adventure, but hard information about what to expect and how others dealt with the unanticipated.

Has it been an easy seven months? Not at all. But I recently read a quote by Henry David Thoreau that spoke to me. It said, “There are none happy in the world but beings who enjoy a freely vast horizon.” To me, the worst thing possible is a boring life. But if there’s one thing we can confidently say about this Life On The Hook™, it’s that while it is at times difficult, uncomfortable, even frightening, it is hardly ever boring. And the horizons it offers are truly vast.

That’s all for now. We’re going to take a few days to relax and decompress from some pretty harrowing, storm plagued ocean passages. If you find yourselves in the Pensacola area, please look us up. Till next time, Eagle Too out. 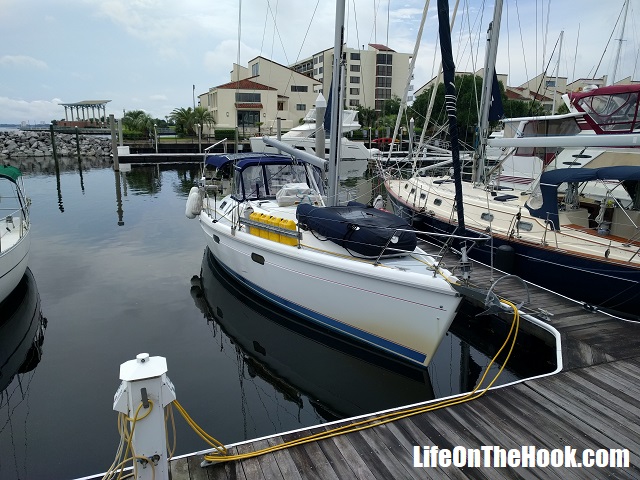