Over coffee this morning, Rhonda and I discussed just throwing in the towel and becoming permanent residents here in the Bahamas. Staying here and embracing the fact that we can’t leave because we can’t seem to get a break in the weather would not only give us a jump on next year’s cruising season, but also put an end to our continual weather frustrations. It was a tempting notion, but we ultimately decided we’re not quite ready to surrender. Almost, but not quite. 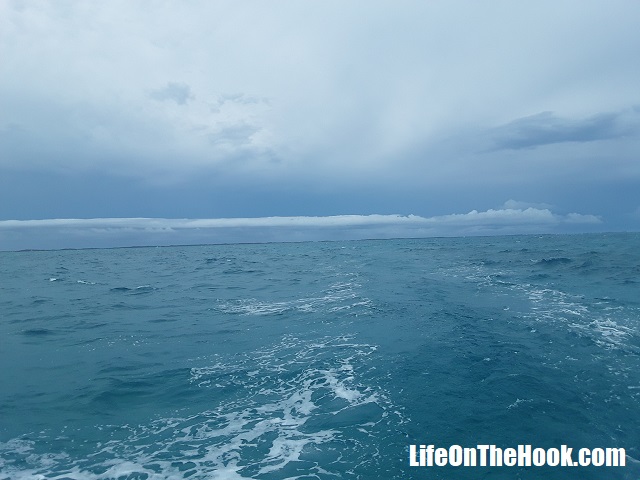 Our daily weather in the Exumas

Thunderstorms and squalls started over three weeks ago. Then the wind started blowing. It’s been raining or blowing (or sometimes both) every day since. We’ve been trying to work our way back to Florida for a while now, but it seems to be just one weather thing after another standing in our way.

For starters, we spent a week or so working our way up the Exumas from Long Island, dogged by thunderstorms the entire way. We were chased into Warderick Wells to wait out a line of storms, and while we were there, the boat on the mooring in front of us was struck by lightning. All their electronics were blown out, and they couldn’t get their engines started afterwards. We felt terrible for them, but we counted our blessings that it wasn’t us. We got out of there as soon as we could. 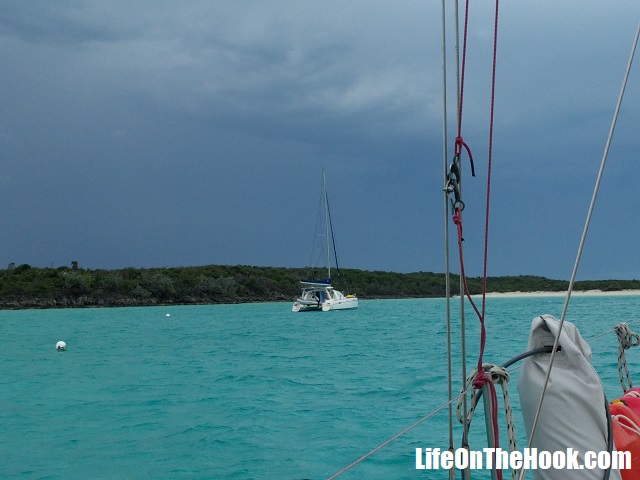 That’s the boat that was hit by lightning. Too close for comfort.

We’d been having increasing difficulty getting our engine to turn over, which left us feeling pretty vulnerable. We knew if we were out on the water and got overtaken by a storm, we’d need to be able to start the engine and turn up wind to get the sails down and then motor through the squall. Maybe salty sailors would just batten the hatches, lash themselves to the wheel and ride the whirlwind, but we’re a little old (or maybe just too sensible) for that kind of thing. We needed to know that when we needed it, the engine was going to start, no question. And that wasn’t the case. I suspected a dying starting battery. It was only three years old, which is a bit premature for it to expire, but it was also a potentially easy fix, so I was hoping that my suspicion was correct when my diagnostics pointed to that as the culprit. There aren’t many batteries to be found in the Exumas, though, so we decided to head back to New Providence and Palm Cay Marina. We knew we’d be able to use the marina’s free courtesy car to hunt down a new battery or anything else we may need. If you’re looking for repair parts in the Bahamas, Nassau is the place to be.

We joked on the way into the marina that we hoped we wouldn’t get stuck here yet again for 7 to 10 days. It seems that every time we decide to go to Palm Cay, circumstances conspire to trap us here until we’ve spent at least a thousand dollars.

The good news is that our problem did turn out to be the battery. They have a large NAPA store on New Providence, and it was an easy errand to borrow the free marina courtesy car and go pick up a marine starting battery. It cost twice what we would have paid in Florida, but they had five in stock with a date code of April 2018 and we were able to walk out the door with one, so there are no complaints. After swapping the new battery for the old one, a quick turn of the key resulted in the engine firing right up. She was her old self again. Problem solved and confidence restored! 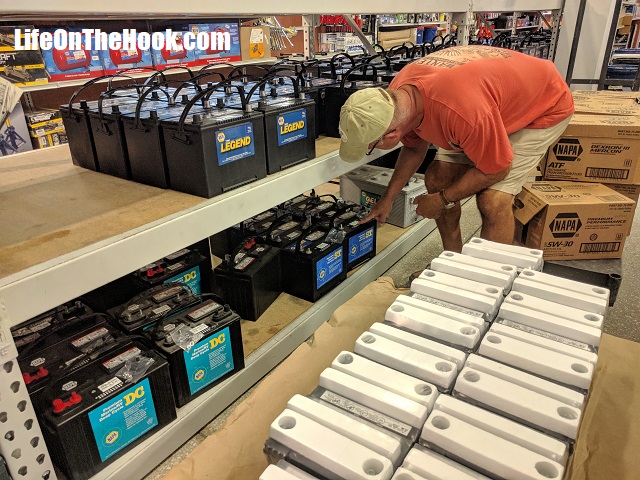 Unfortunately, I guess in the great cosmic ledger, we still owed Palm Cay Marina some more money, and it was our fate to remain until we had surrendered it. Even though we were able to fix our problem in 24 hours, for the next few days the wind blew way too hard for us to get out. We thought we saw a window after a couple of days, but then Mike’s Weather Page, an amateur weather resource a fellow boater introduced us to, began warning that advance models showed a possible low forming in the Caribbean and moving north toward Florida.  It looked as though if we left Palm Cay, we’d be heading right into the path of a potential tropical storm. In addition, a persistent strong southerly flow sucking moisture up from the Caribbean has erected a wall of squalls and thunderstorms between the Bahamas and Florida, which we had absolutely no interest in trying to sail through. 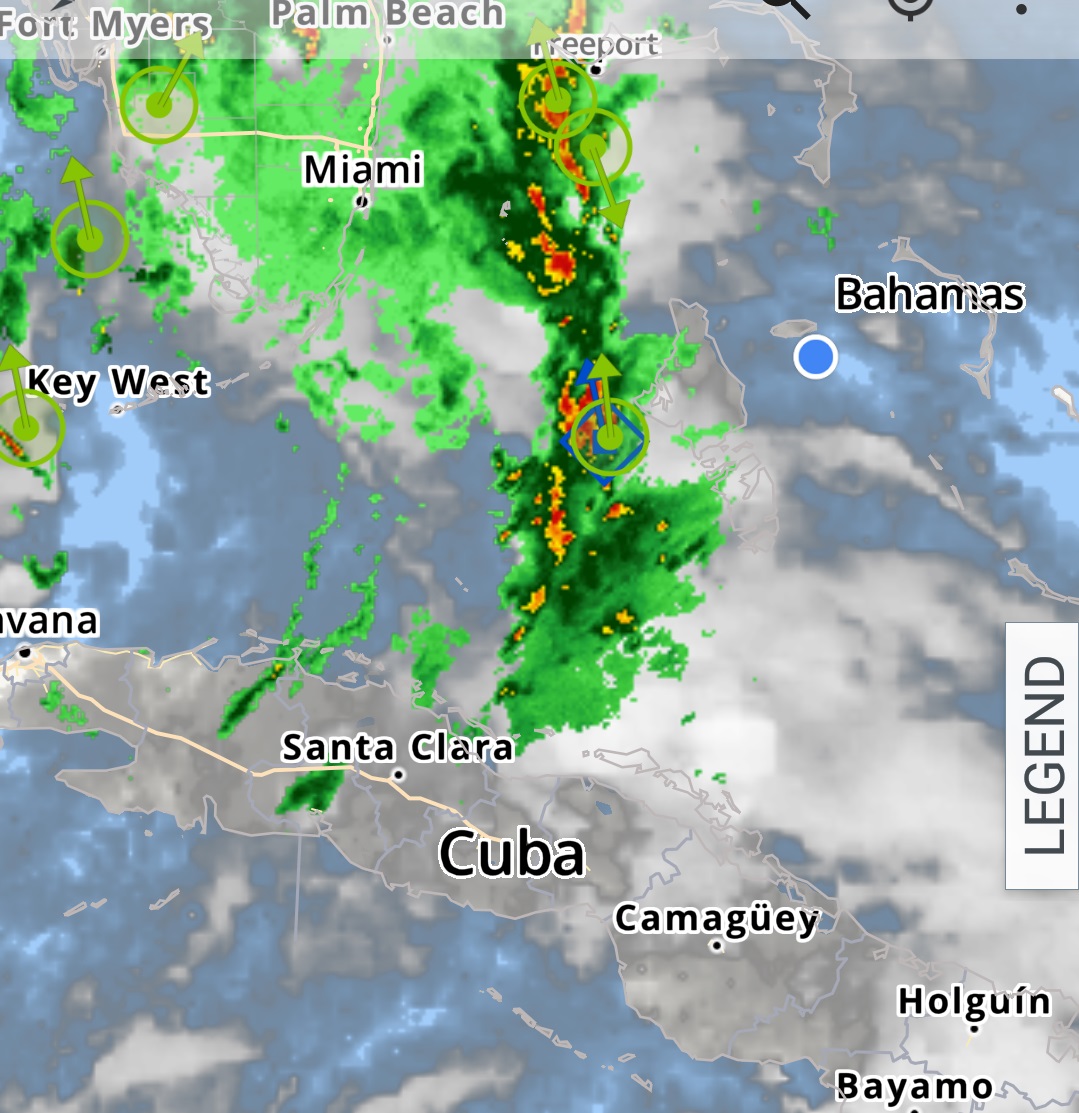 This wall of thunderstorms persisted all week

So now it’s a week later, which means we’d once again pulled in for just a few days and ended up staying until our bill exceeded $1,000. The low that the amateurs started talking about almost a week ago has finally attracted the attention of the professionals at the National Hurricane Center, which is giving the system a 40% chance of development over the next several days.  But it looks like we have a few better days coming up in which to move the boat before conditions are predicted to deteriorate (still rainy, still windy, but not so much that we can’t make a go of it). We’ve decided to cross the Great Banks back to Bimini and then hole up in a well-protected marina we know there to wait out the approaching low and the predicted 40 knot winds. At least that way we’ll only be a single day’s travel from the Florida Keys when things finally settle back down. Whenever that may be. Possibly next month.

Since we had some time to kill, we did manage to have some fun while here.  A couple we befriended back in St Pete (who offered Rhonda and I a lot of support and assistance when I had my injury) were in the marina also, and we got to play tour guide and take them to some of our favorite places in Nassau. Here are a few pictures. 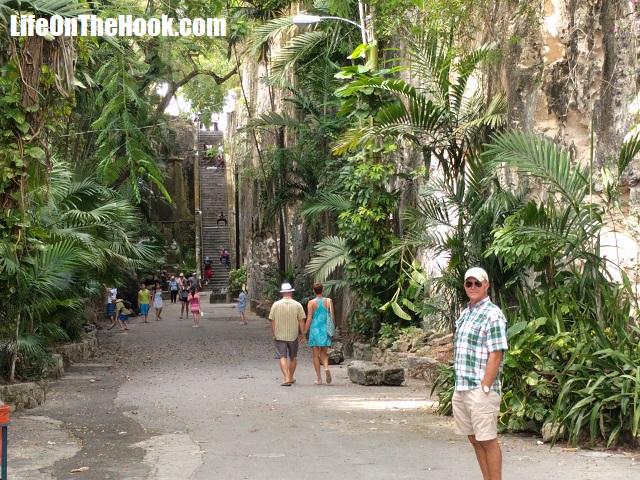 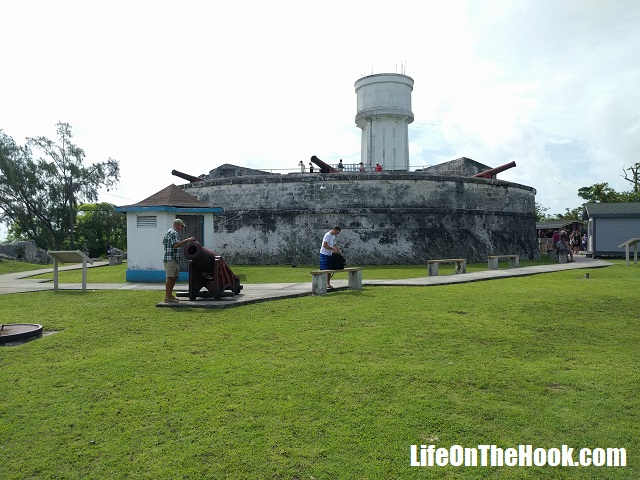 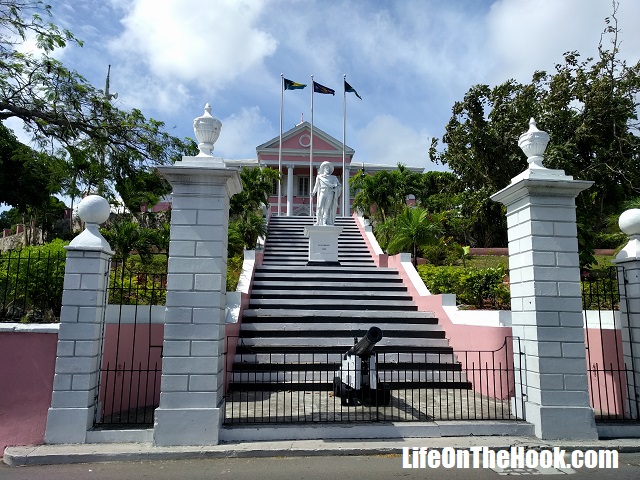 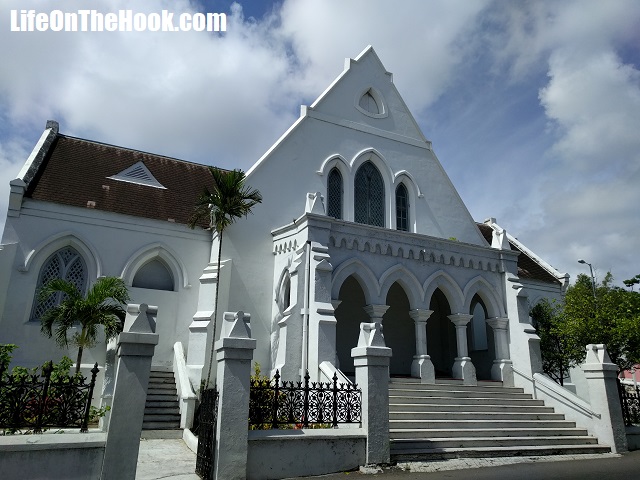 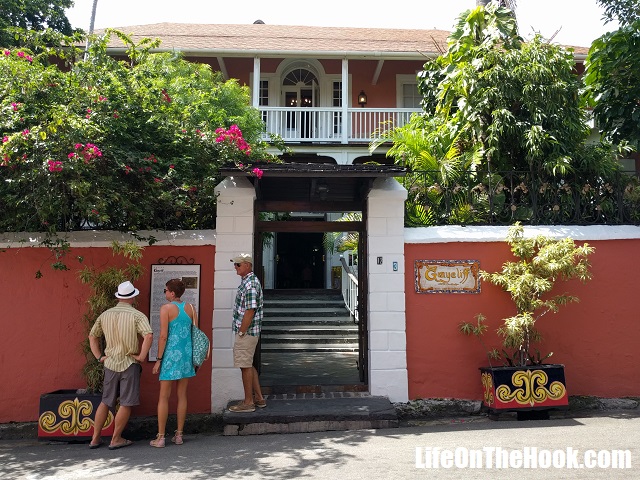 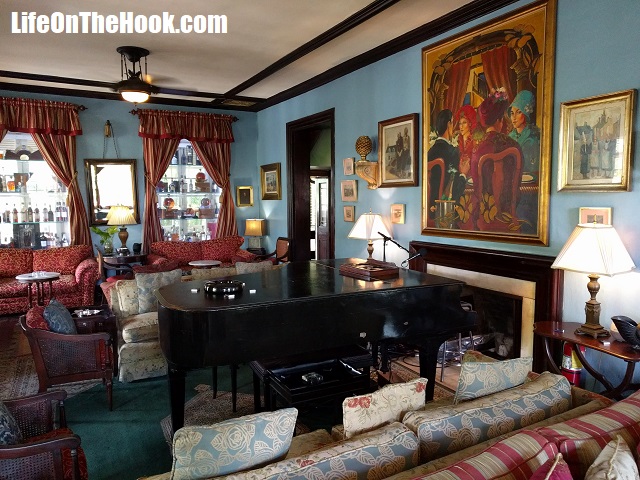 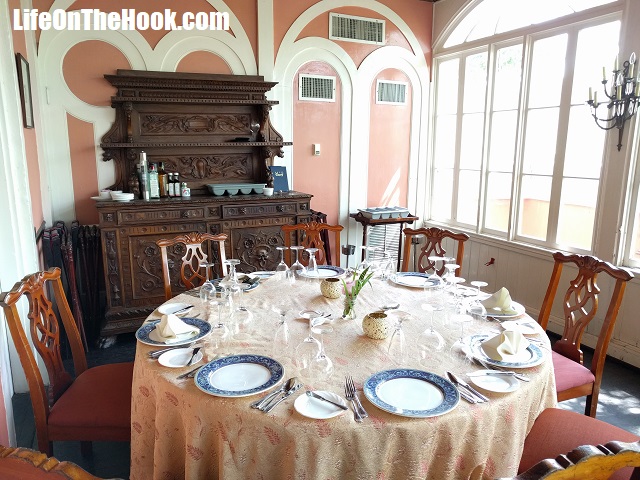 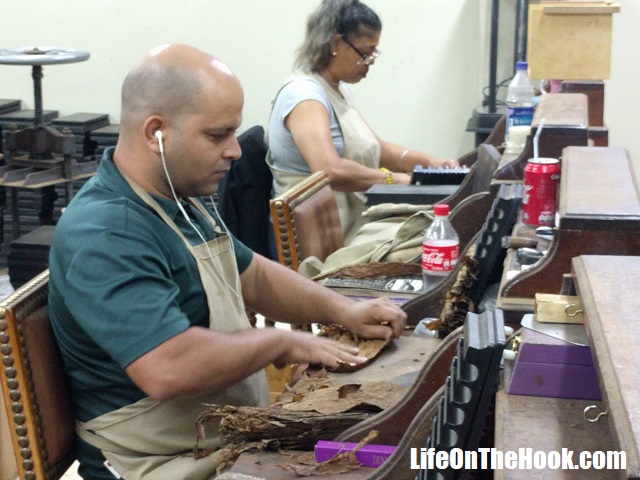 In addition to a hotel and a restaurant, Greycliff has factories for both hand-rolled cigars and hand-dipped chocolates.

Our friends had heard of an area called The Fish Fry, which featured dozens of locally owned Bahamian restaurants. We checked it out and selected one for lunch. 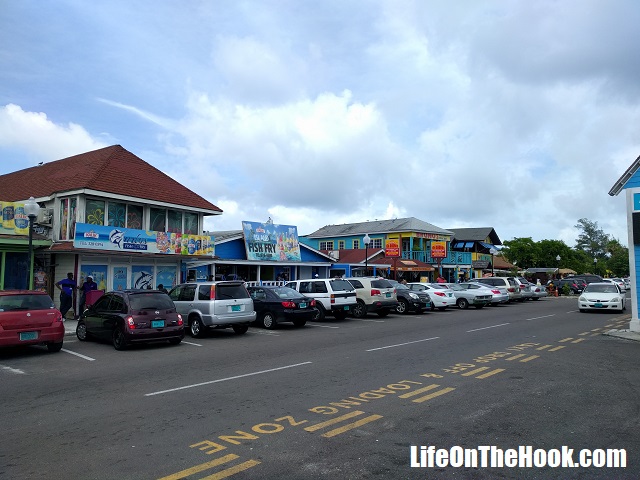 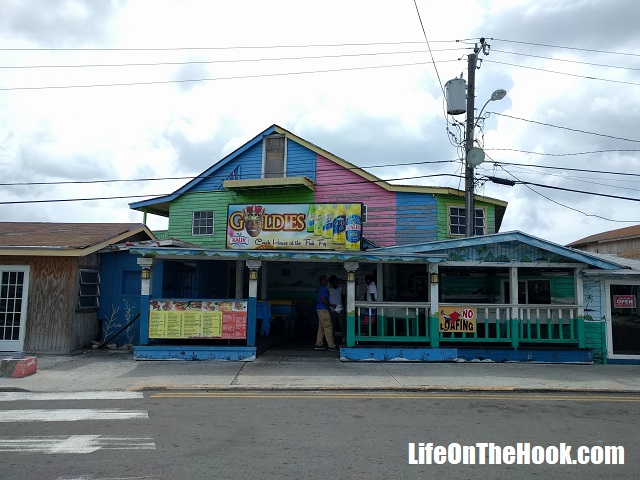 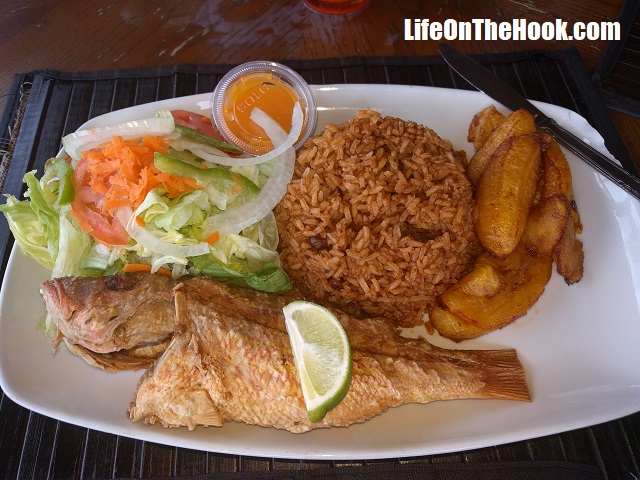 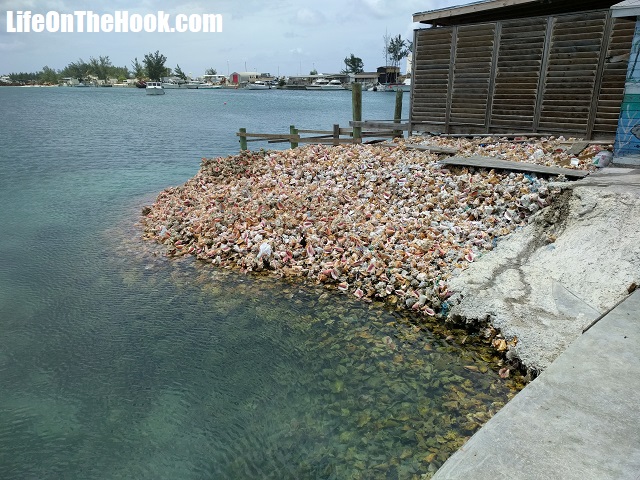 The Conch shell pile behind the restaurant. There is apparently an infinite supply of this Bahamian staple.

And of course, when in Nassau you have to pay a visit to Atlantis. 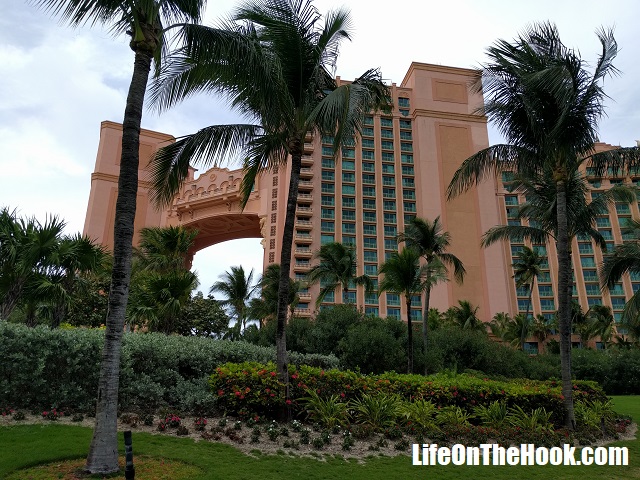 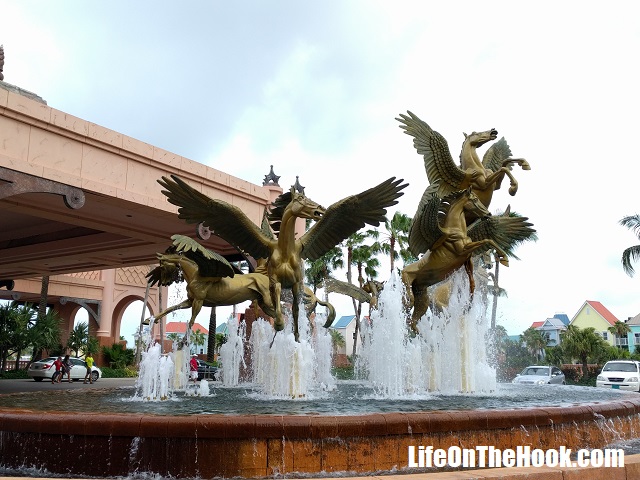 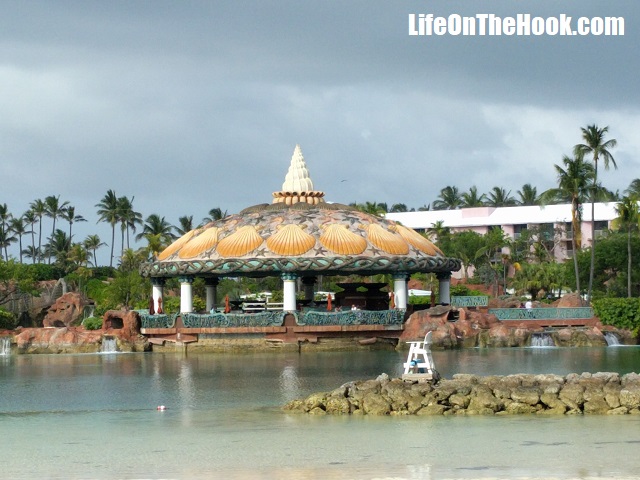 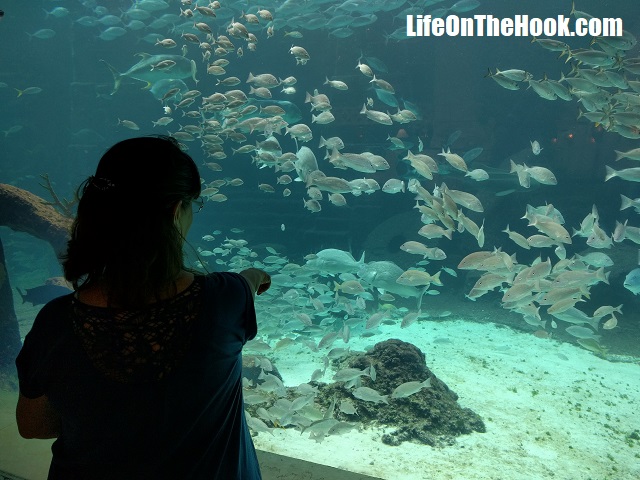 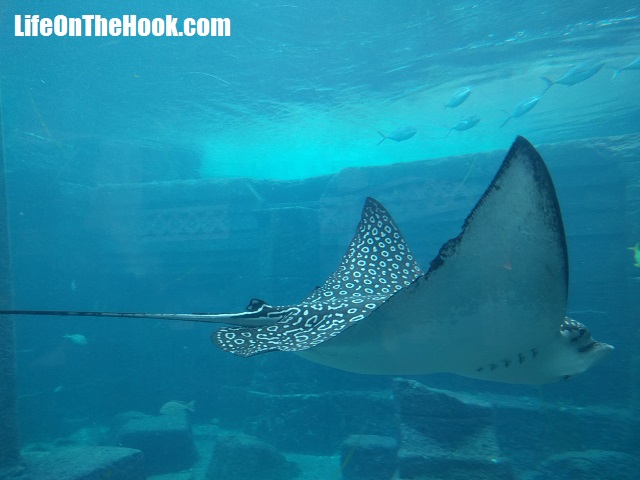 In a final note, we got to meet this fellow the next day, swimming around our boat. He (she?) had latched on to a water hose and was happily sucking down gallons and gallons of fresh water, and didn’t seem to mind a bit when people swam over to pet him. 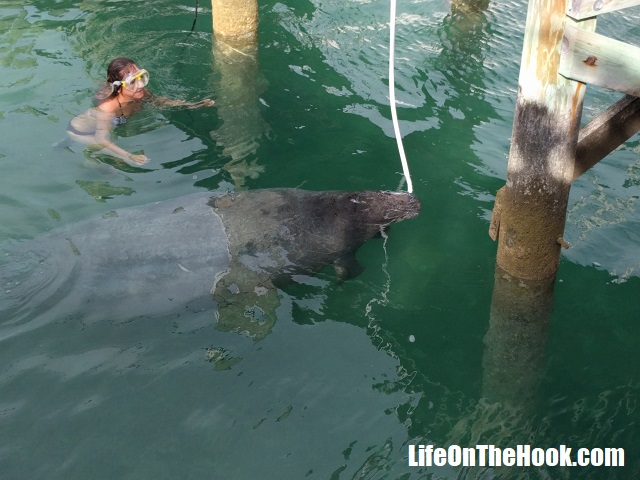 As always, we’ve enjoyed our time here on New Providence. It’s nothing like the majority of the other islands we’ve visited in the Bahamas. But sometimes you just need a dose of civilization or ready access to spare parts. Tomorrow we’re departing for the Berry Islands, and then on to Bimini. We’re keeping our fingers crossed that we can make it safely in to Bimini Sands Marina before the weather goes south.