Twenty-eight sailboats came to the starting line. They formed up abreast of one another, dropped their sails, set their anchors, and waited for the starting gun. 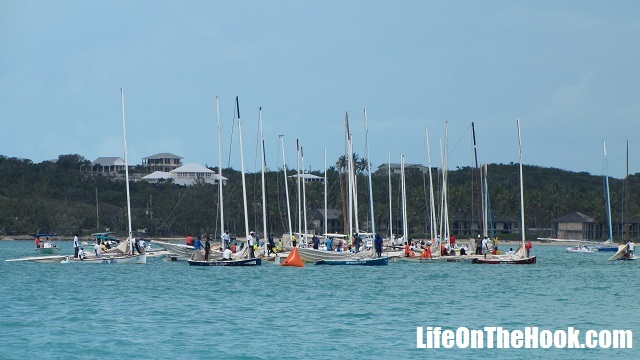 Everything was quiet for a moment, the crews tensely waiting at their stations. Then the loud report of the gun kicked everyone into action. The anchor men started furiously hauling in the rodes, pulling the boats across the starting line while the line handlers begin hauling up the sails. 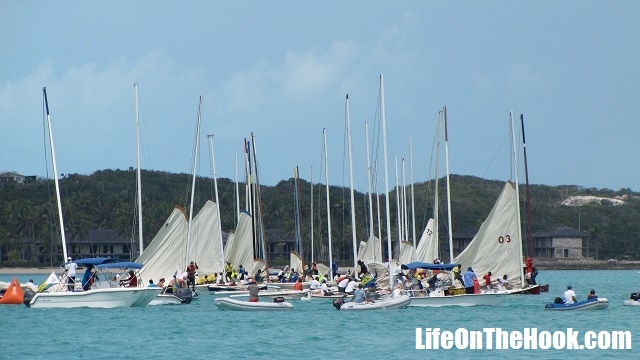 The helmsmen tried to lay in a course that would avoid the jam of other boats twisting to find the wind while giving them each an advantage off the line. Everyone was shouting orders, warnings, insults. It was pure pandemonium! 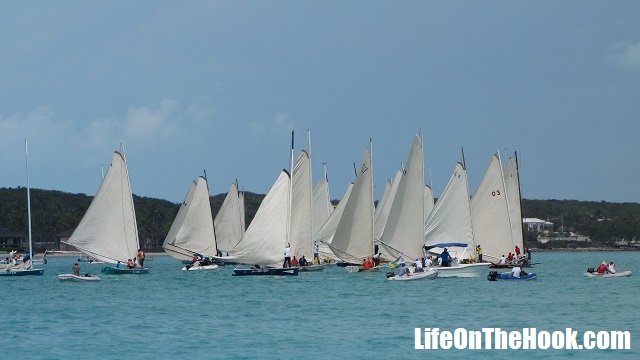 This was our second year attending the National Family Island Regatta. If you haven’t been following us for long, please go back and read this post from last year’s Regatta to better understand what an awesome event it is:

The Family Island Regatta: The Reason We’re Here in Georgetown

This year, though, the races were taken to an entirely new level. Gusty, variable winds challenged the crews to maintain control of their vessels. Some would set a reef in their mainsail, others wouldn’t, and it was anyone’s guess which decision the fickle winds would favor. The boats seemed to stay bunched tighter together, resulting in high drama while rounding the marks. And to top it off, we decided this year to anchor Eagle Too in Kidde Cove, closer to the race course. At times, wind shifts actually put us inside the course, with race boats coming down both our port and starboard sides. How close were we to the action? This close! 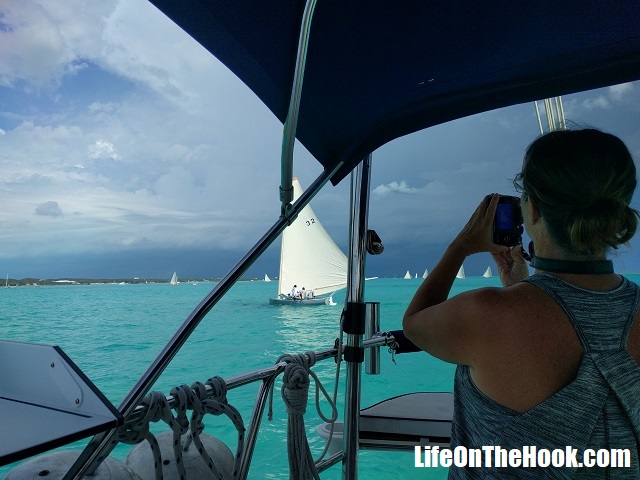 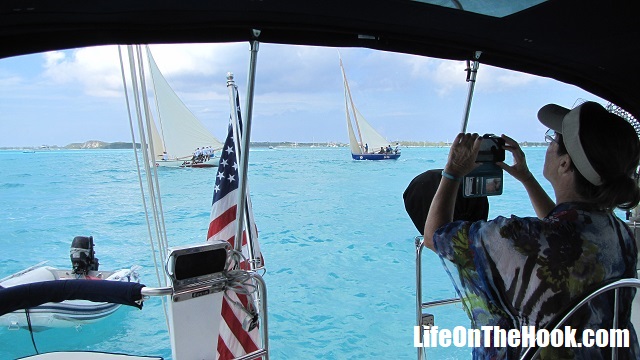 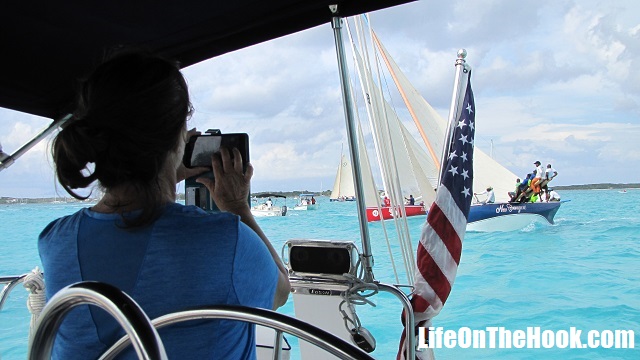 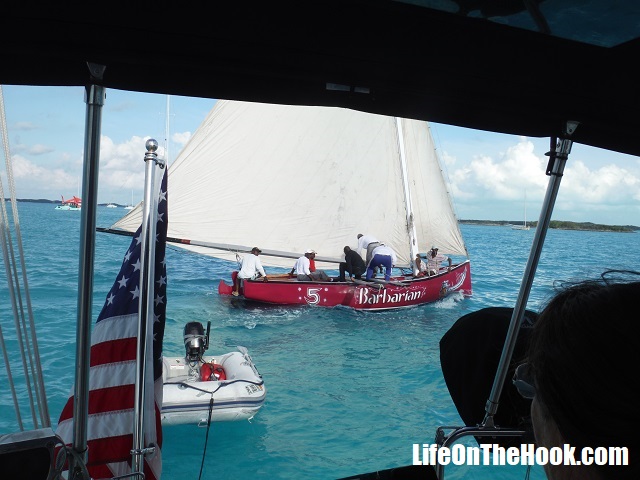 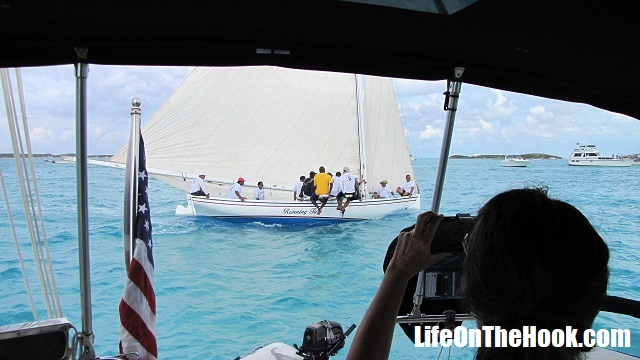 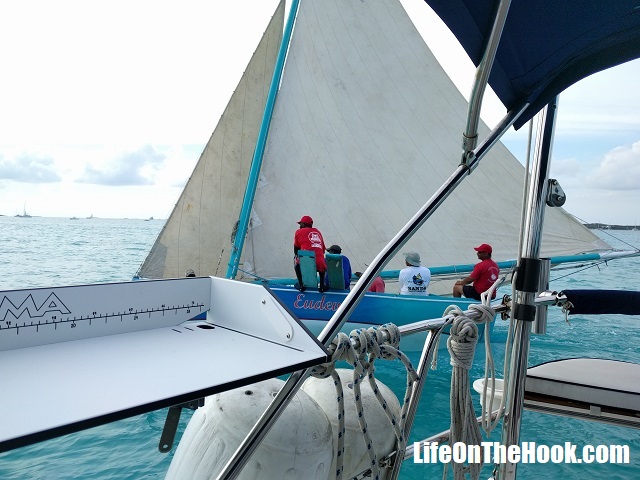 A dozen boats tried to round the mark where there was only room for half that many. Boats were colliding, crew members were yelling, pushing other boats and in some cases jumping or falling from one boat to another. 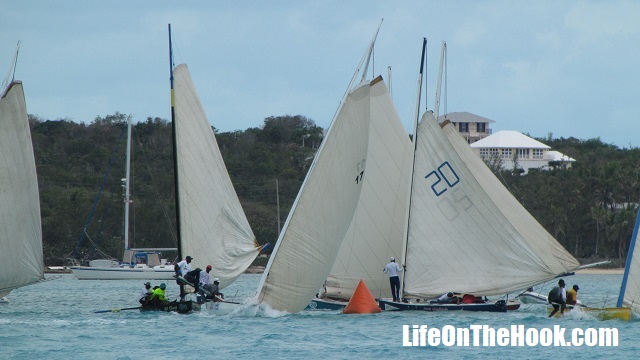 Then boats began to sink. Whether from collisions or wind gusts, boats were tipped on their sides, emptying their crews into the harbor and disappearing underway, leaving only their masts visible. Then unbelievably, other boats actually started running over the sunken vessels with their crews treading water. It was literally a waterborne train wreck. Damn it was fun to watch! 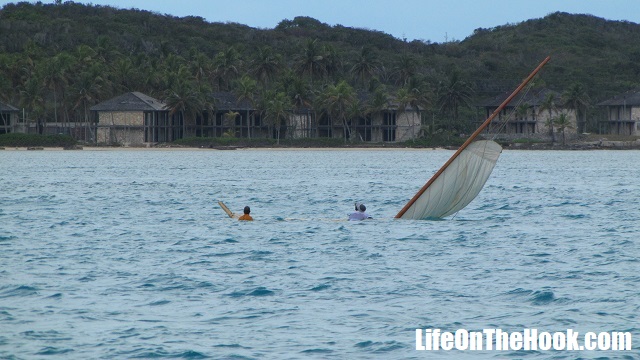 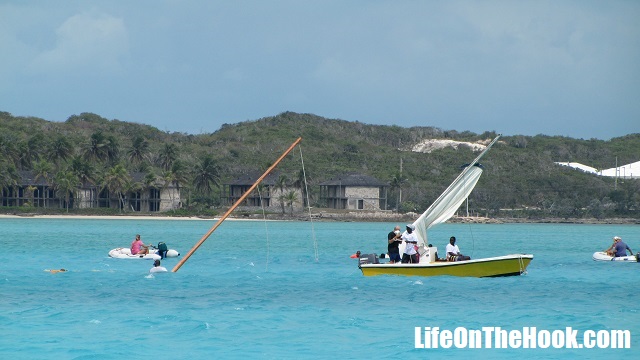 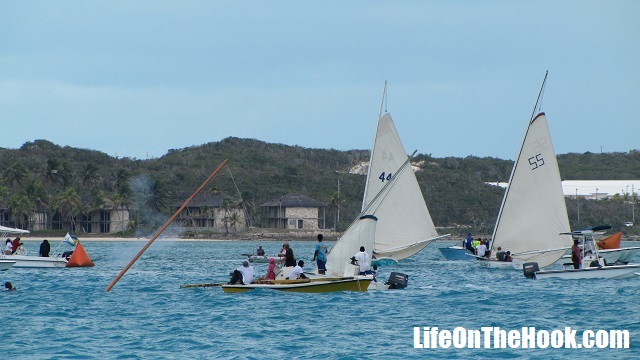 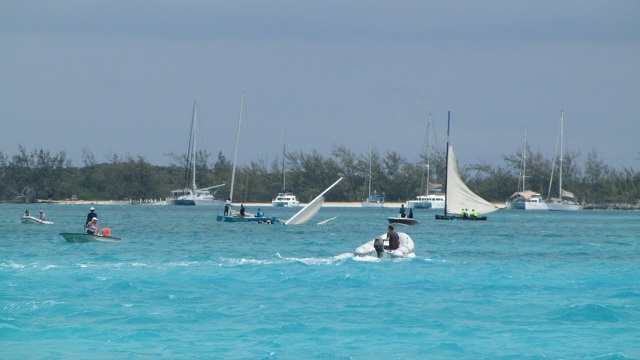 A cruiser chasing the boats in his dinghy gave color commentary on VHF channel 72. Blow by blow, turn by turn, he excitedly called out collisions and sinkings and strategic moves like a professional horse track announcer. His excitement was infectious. Full contact demolition sailboat racing. If ESPN would broadcast this, I think the ratings would be phenomenal!

Twenty-eight boats came to the starting line. By the end of the race, four were sitting on the bottom of the harbor, and six more had been towed off the course, unable to complete the race. But no one was hurt, so in the end, it was just an exciting place to be.

We enjoyed some of the finest sailboat racing you can imagine. From little Class E dinghies with a crew of one or two: 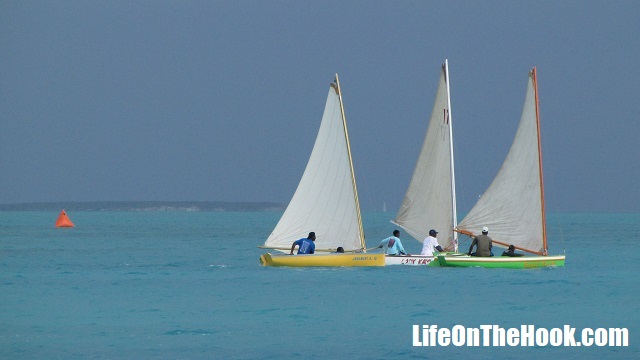 to the stars of the show, the big Class A sloops, with their crews of 14 or more: 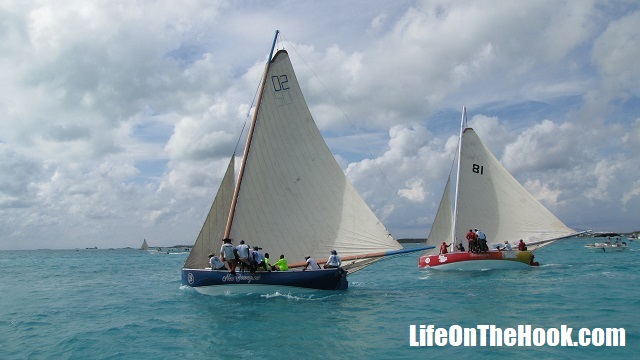 it was four full days of fast action and high drama on Elizabeth Harbor. If you love sailing and you haven’t attended a National Family Island Regatta, you really should put it on your short list of things to do someday! We’re so glad we had this opportunity to experience it again.

We have some videos to post, but it will have to wait for a time when we have a better internet connection. For now, here’s just a sampling of the hundreds of pictures we took. 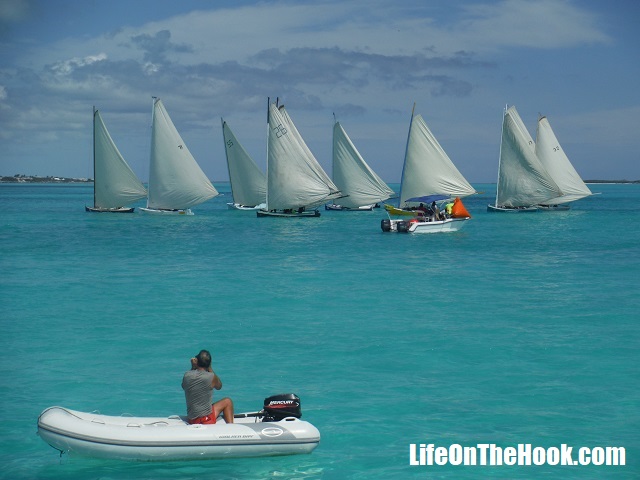 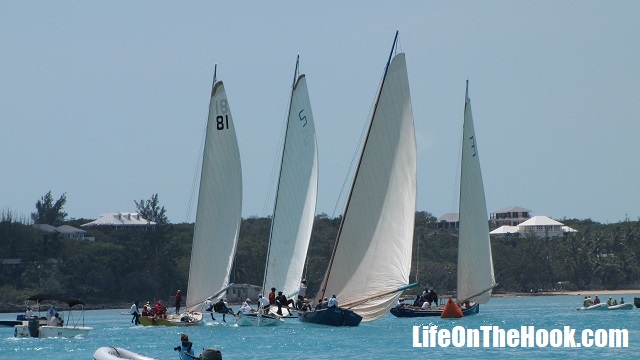 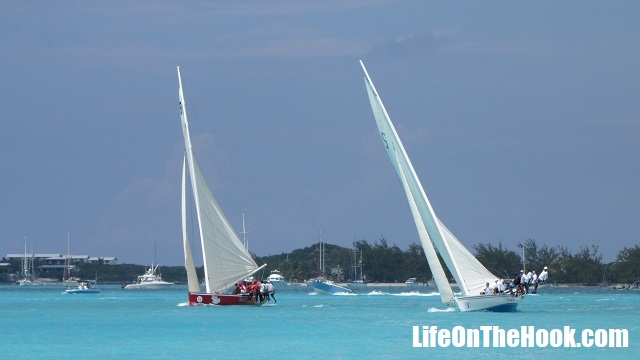 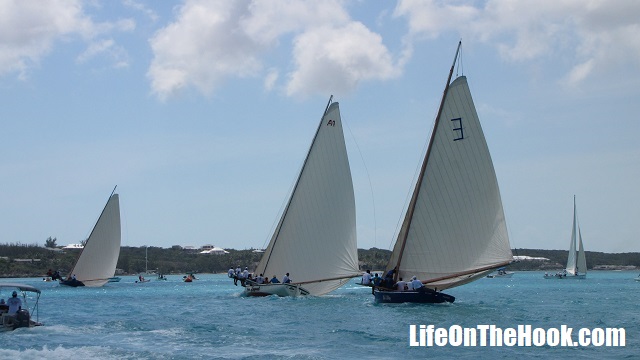 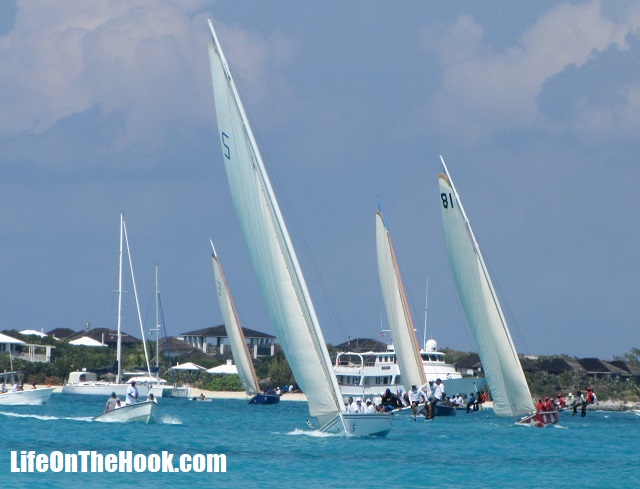 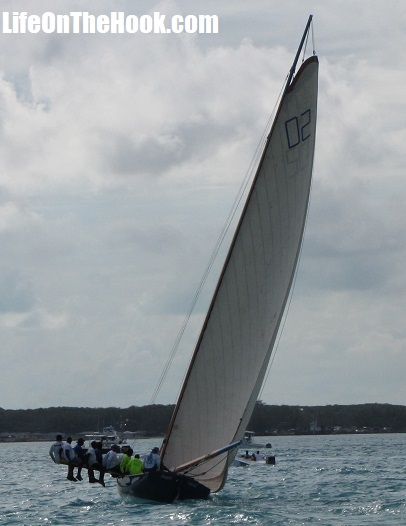 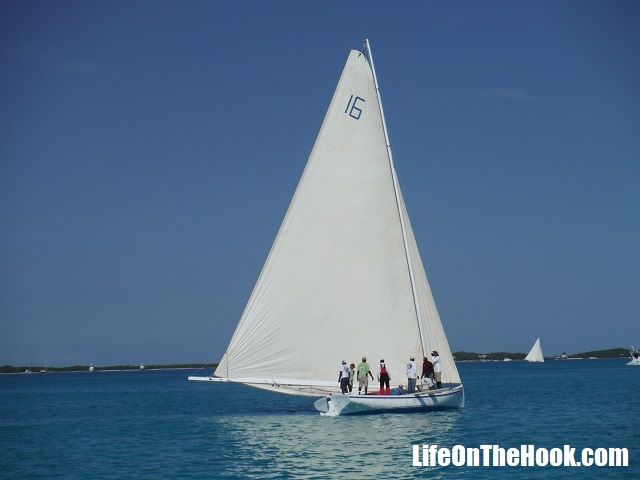