Eagle Too and the boats around her dance at their moorings as the winds blow steadily from 25 to 30 knots. Whitecaps dot the harbor. We listen as gusts howl through the rigging, our bow lines creaking as they strain to hold us in place.

It’s our fourth time stopping in Marathon, Florida, but it’s the first time we’ve picked up a mooring from the Marathon Municipal Marina in Boot Key Harbor. Even though there are over 200 mooring balls in the harbor, the location is so popular with cruisers and liveaboards that there is typically a 30 to 50 boat waiting list for a mooring at this time of year. Things don’t usually start to open up until after April, when cruisers from places north, their winter season over, start their seasonal homeward migration. 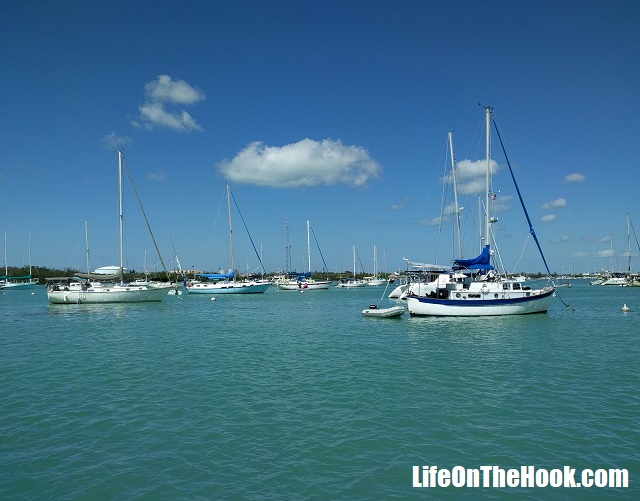 Usually on our trek south we end up anchoring outside the harbor while waiting for good weather so that we can move on. This year is different though.  There are actually moorings available. As we look around, we can see several empty ones near us. The reason is Hurricane Irma. When the storm hit the Florida Keys last September, there were over 250 boats moored or at anchor in Boot Key Harbor. After the storm passed, only about 50 remained. Most of the permanent residents were wiped out, and many seasonal cruisers who would have normally filled the vacant space in the harbor decided to skip this season in light of how hard the local area was hit. The result is that when we hailed the marina, they were able to immediately assign us a mooring ball. 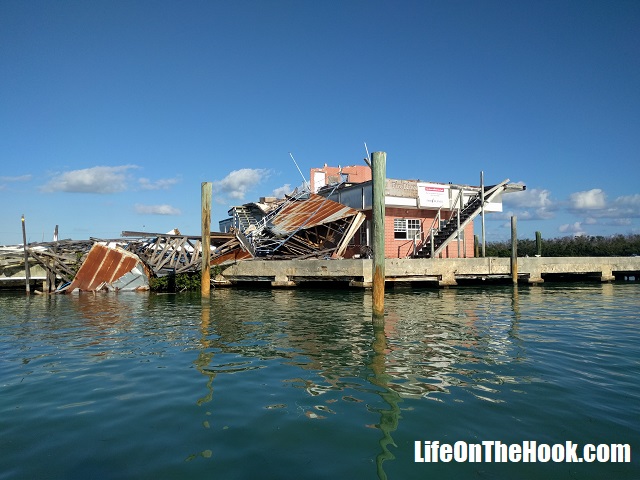 Hurricane damage in Boot Key Harbor. This was an abandoned marina, but the last time we saw it the building was intact.

Once the strong north winds in Ft Myers Beach blew themselves out, we experienced a near perfect three days of mild and sunny weather to continue our trip south to the Keys. This is the third time we’ve made this trip in the last two years, and we have a well-established route. From Ft Myers Beach, we head down the Gulf coast to Marco Island, and anchor in Factory Bay. 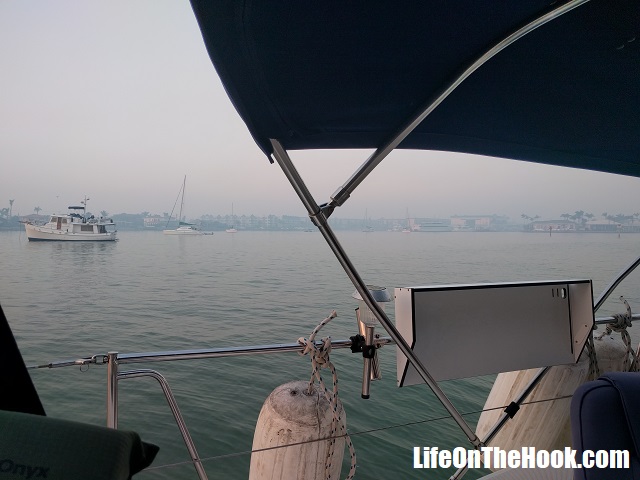 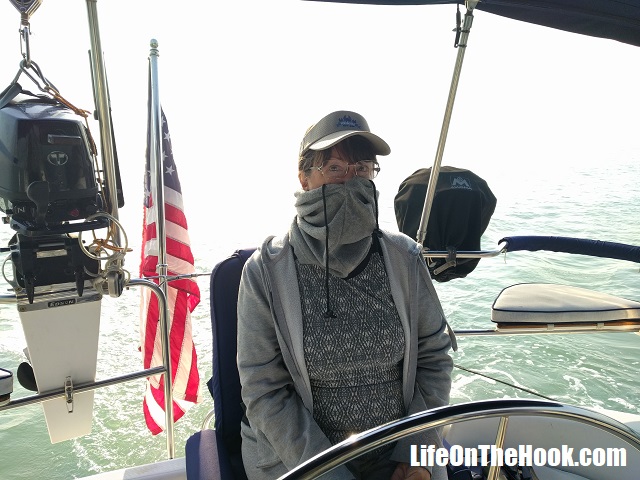 Smoke so thick it was difficult to breath.

Next, we continue south past Cape Romano and then turn east towards the Everglades, to our next overnight anchorage at a spot called Little Shark River. It’s a great place to park for the evening because if the wind is from the typical easterly direction, you can anchor a mile offshore in 10 feet of water, protected from any wind-driven swell and far enough out to be left alone by the mosquitoes and no-see-ums. But if winds turn westerly, you can head up the river to anchor (in depths of 12 to 14 feet once you clear the entrance bar) and have a peaceful evening. Just be sure you have good screens!

From Little Shark River, it’s an easy seven hours across Florida Bay to the Seven Mile Bridge and the Florida Keys. Well, it’s easy except for the millions of lobster pots that dot the Bay in the winter. Making this crossing at this time of year is actually a lot like running a slalom course, with constant course changes to avoid running over one of the lobster pot floats and potentially wrapping its line around the prop and shaft.

Once in Marathon, a look at the weather forecast convinced us to head to one of the available moorings in the harbor rather than anchor out. We’d originally been hoping to just stop for a day, maybe two, and then be on our way for the Bahamas. But a building high pressure system to our north was predicted to bring us several days of strong east winds, in the 20 to 30 knot range. On the Beaufort scale, that’s what’s known as a Force 5 to Force 7 wind. If you’ve followed us in the past, you know we have a philosophy here on Eagle Too that features something we call the suck-to-fun ratio. We like cruising in calm seas in warm sunny weather in 8 to 12 knots of breeze, because it’s fun. We don’t like bashing into six foot swells in 25 knots of wind, because it sucks. It’s strictly Force 4 winds or below for us. We travel with purpose, and that purpose is to enjoy ourselves. The weather forecast we were looking at did not have a lot of potential fun in it. So we elected to pick up a mooring and wait it out. 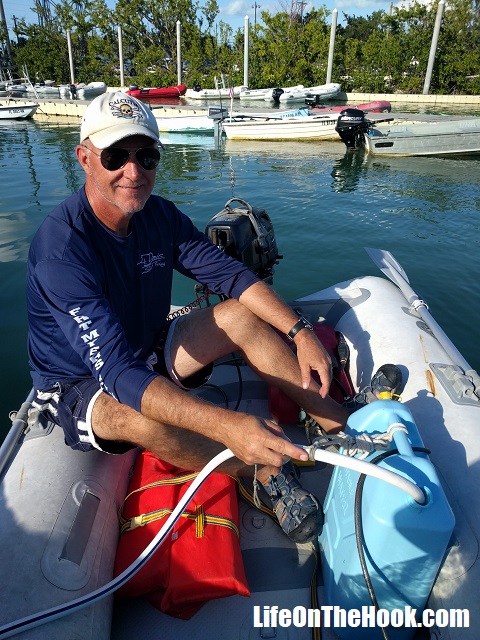 Life On The Hook isn’t all glamour and sunsets. Filling a water jug at the dinghy dock to transport back to Eagle Too.

The wind blew for three days, but things finally died down and we were once again on our way. We slipped our mooring and moved to the anchorage outside the harbor to stage for an early departure the following day, stopping at the fuel dock on the way out to top off the tank and fill our reserve jerry jugs. 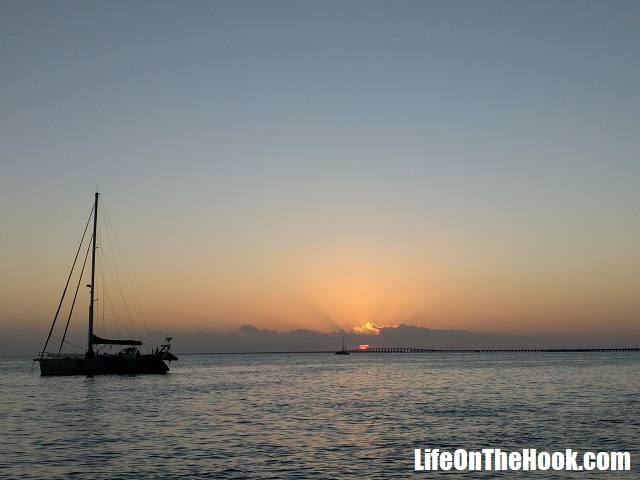 Sunset over the Seven Mile Bridge

In one of those “it’s a small world” funny coincidences, we learned on the way out of the harbor that we had been moored for four days right next to Penguin, another boat from Pensacola, who was also heading for Bimini. They actually keep their boat right around the corner from us in Pensacola. We spent the next two days leapfrogging past each other as we headed up the Keys, and are now anchored 100 yards apart near the SW shore of Rodriquez Key, just off Key Largo. 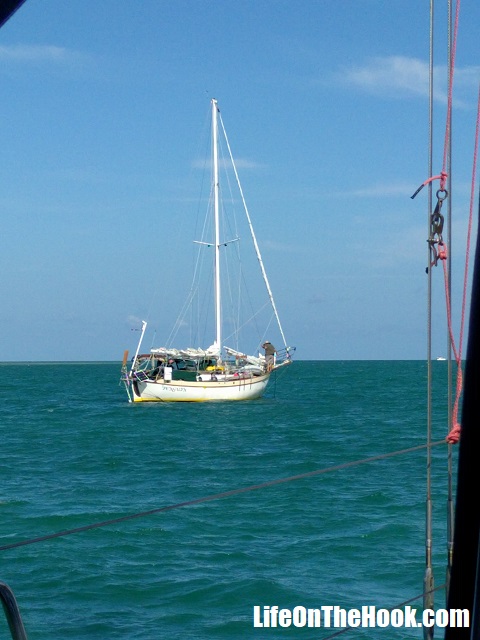 It’s Easter Sunday, the first of April, and we’re having a relaxing day doing some writing and weather research. We’re not liking the east winds that are currently blowing for a Gulf Stream crossing, as we’d be heading right into them, but they’re supposed to veer to the southeast in a couple of days. Tomorrow we’ll probably make our last coastal jump north to Angelfish Creek and an anchorage we know off Old Rhodes Key, and then make our crossing to Bimini when the winds turn southerly on Wednesday. Again, if you’d like to see where we are, you can locate Eagle Too by checking our mapshare page at share.garmin.com/EagleToo.

Hopefully we’re just a few days away from a couple of cold Kaliks and some warm Bahamian bread!

3 thoughts on “We Don’t Do Force Five”