I’d never ridden in an ambulance before. I guess that’s a pretty good thing. But now here I was, strapped to a gurney, taking that dreaded ride. I can’t say I recommend it. The vehicle swayed and bounced, and if I hadn’t been belted down I probably would have ended up on the floor. Plus the service left a lot to be desired. I asked if I could have a little water. The EMT replied, “We don’t have any water, or peanuts either.”

“Sorry, but we get asked that a lot. We don’t have any water.” At least she was smiling, so I think it was intended to be a lighthearted moment.

And a little while later, there I was in the ER treatment room, Rhonda by my side, as the doctor looked at my X-rays.

“It’s not just dislocated?” I asked with resignation.

“Lateral fracture of the patella,” he explained, showing me in the X-ray image where what should have been one bone was now two distinct pieces. “By the way, that was pretty badass, pushing your kneecap back into place,” he added. He said he’d worked with hockey teams quite a bit, had seen similar injuries, but couldn’t recall a time where the patient was able to relocate the broken bone himself. “Kudos,” he added.

The hospital arranged a consult with an orthopedic surgeon for the next day, but since my condition wasn’t severe enough to admit me, they gave me a leg brace, a pair of crutches, and a prescription for pain meds, and showed me the door. Unfortunately, in my current condition, there was no way I would be able to climb back onboard Eagle Too. We had to book a hotel room for the duration.

The next day, at the surgeon’s office, the doctor explained that the lower third of my kneecap was mush and unsalvageable, but the top two thirds looked pretty good. In my current state, my patellar tendon, which is what moves the lower leg, wasn’t connected to anything, which explained why I had no ability to lift or straighten it. But he felt pretty confident he’d be able to reattach the tendon to what remained of my kneecap, restoring normal leg function. A few weeks of recovery and a few months of physical therapy and I should be, if not quite as good as new, at least able to return to my normal range of activities. He scheduled the surgery for the next day.

We’d never used Uber before. It actually works really well. Until now Rhonda had been able to borrow a car from some friends in the marina (thanks Mike and Jen!) to transport me around. But they had plans today, so we took an Uber to the surgery center. I can see why the service has become so popular. Once you set the app up on your phone and enter your payment method, then you just type in where you need to go, and in minutes a car pulls up to take you there. No cash is required, as the payment is handled by the app. I guess if there’s one small bright spot in all this, it’s that we’ve learned a new way to get around.

The surgery went well. The doctor said I could walk on the leg while I was recovering, and that he’d see me in 12 days to take off the leg brace and unwrap everything. If it all looked good, I could then start physical therapy.

We stayed in a hotel for five nights, but I wanted to get back onboard Eagle Too as soon as possible. Not only is she our home, but the hotel bill was eating us alive. With Rhonda’s help and the assistance of friends in the marina I finally stepped back onboard five days after the accident.

With a few minor bumps, each day since has been better than the one before. I’m eight days post-surgery now, and while I still have a cage on my leg and a bandage from my ankle to my thigh, I’m feeling pretty good. I’ve been completely off pain meds for over 36 hours, and I can lift and walk on the leg with little pain. Rhonda has been taking very good care of me, and I’m quite fortunate to have such a capable partner. I can’t imagine what dealing with something like this would be like for a single-hander who doesn’t have someone to prepare meals and dispense meds and take care of all those little boat chores that still need doing like filling the water tank and adjusting the lines. Thank you for being there for me, dear!

So that’s where things stand as of today. I have my follow-up appointment next week, and I’m pretty sure it will go just fine. With Rhonda’s help I was able to get off the boat and take a short walk on the pier yesterday. Today we did it again and I went at least twice as far.  Hopefully before long my range will increase from just a brief stroll on the pier to being able to make it the three or four blocks into town so we can take in a few movies at the AMC or grab lunch someplace. It will probably be a while before I can get on a bike again though. 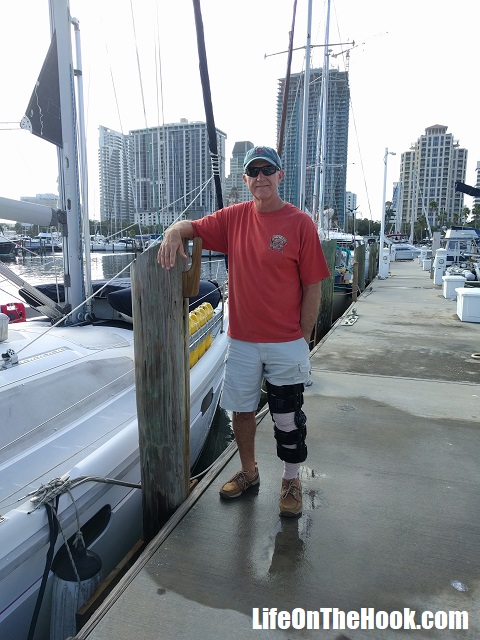 It’s still too early to tell what comes next for us. We’ll most likely call off the rest of this cruising season and return to Pensacola in a few months so that I can finish rehab at home. With luck, by spring this will all be just an unpleasant memory and we’ll be ready to head south again next fall. There is even a (remote, but not impossible) chance that if my leg heals enough in the next four to six weeks, we might be able to salvage at least a few months of the season, possibly traveling down to the Keys. We’ll see. I’d just need to feel confident in my ability to do things like get in and out of the dinghy, climb the stern boarding ladder or stand on the foredeck and work the anchor windlass without my left knee folding up.

I do know one thing though. If I ever decide to move forward with that cruising guide I’m considering writing, I’ll be able to approach the chapter on “Dealing with Medical Emergencies” from a position of firsthand experience!

6 thoughts on “The Road to Recovery”