Eagle Too tugged at her lines, dancing and swaying at the dock as she was buffeted by strong north winds. Rhonda and I slept fitfully, our rest constantly interrupted by sudden jerks and shudders. In the early AM, we simultaneously awoke, both realizing that the boat didn’t feel right. She had a pronounced list (lean) to port, and the boat wasn’t rolling back to level as she should. Something was wrong. And I had a pretty good idea what it was.

The full moon (the Wolf Moon) had shown brightly and clearly in the sky when we had gone to bed the previous evening. A full moon makes for spring tides (which has nothing to do with the season), with higher highs and lower lows than are typical. The strong north wind that had been blowing since the passage of a recent cold front had pushed an enormous amount of water out of Tampa Bay. Taken together, the result was an extreme minus tide. Poking my head up the companionway, I could see that Eagle Too was sitting almost four feet below the dock.

We’d been here at the St Petersburg Municipal Marina for over six weeks, and we’d “dialed in” our lines and fender board so our boat rose and fell to the tides with no adjustments necessary. But this super-low tide had us hanging from our lines, which had drawn up as tight as guitar strings, causing the boat to roll to port. I had to go ashore and loosen them to relieve the pressure or risk tearing out our deck cleats.

As I stood on deck, the dock was at about the level of my upper stomach. Placing my hands on the dock, I jumped up and got a knee on top of it while doing a pushup, easily scrambling up off the boat. Loosening the lines to take the pressure off our cleats, Eagle Too settled down into the water and rolled back to level. Job accomplished, all I wanted was to return aboard and crawl back into our still warm bed.

Because the lines were now loosened, Eagle Too was not only almost four feet below me, but the north wind had also pushed it about 2 feet away  from the dock. It seemed like the best way to get back aboard was to sit on the edge of the dock with my legs dangling over the side while Rhonda, who was still aboard, pulled the lines to try and pull the boat closer to the dock. She pulled the boat in as close as she was able, and then released the line and moved aside so I could jump back aboard. I swung my legs out in front of me, pushed off the dock with both arms, and launched myself in an arc toward what I thought was going to be a graceful landing onboard.

Maybe it was because the boat started drifting away as soon as Rhonda released the line, or maybe it was because the graceful arcing leap my youthful feeling brain attempted to perform was poorly executed by my not-so-youthful 59 year old body. But rather than both feet landing squarely on the deck as planned, I just barely caught the edge of the boat with the tips of my toes. Down I went, falling along the side of the boat, eventually catching myself with my elbows and preventing a fall into the frigid water.

A quick blast of pain told me I’d banged my left knee on the toerail of the boat as I slid down the side.  But my first concern was to get myself back onboard. Pushing myself upright and swinging my legs up over the side, I was able to clear the side of the boat, collapse onto the deck, and then crawl into the cockpit. I was relieved that I hadn’t gone swimming, and grateful that I hadn’t hit my jaw or head. We’ve known of others who had killed themselves in similar circumstances by hitting their heads, knocking themselves out and falling into the water and drowning.

With time to now evaluate the situation, I took stock of my condition. My arms and shoulders were a little sore from where I’d fallen onto them, but everything still worked. My biggest problem was that my left leg was really starting to throb, and I couldn’t move it very much. I pulled up the leg of the sweatpants I’d donned to go topside, and the first thing I noticed was that my left kneecap was now on top of my thigh.

“Well that can’t be good,” I thought. “Better put it back where it belongs.” I believed it was most likely dislocated, and pushing it back into place seemed like the right thing to do. So I put my left palm on the lump atop my thigh, placed my right hand over the left, and then gently walked my patella back to the front of my knee. I needed a couple of minutes to catch my breath after that, but then I took my leg in my hands and began slowly flexing the knee to make sure nothing else was broken while Rhonda went below to grab an ice pack.

“OK, this is going to be fine,” I thought. “A few days of ice and compression and I’ll be good as new.” Just then one of the marina dock managers walked by, checking to see how boats were handling the low tide. “How’s it going?” he asked.

“Not so good,” I replied, rubbing my knee with both hands. “I just fell back onboard after adjusting our lines, and I banged my knee up pretty good.”

A look of concern crossed his face. “Do you want me to call someone?” he asked.

I started to say no, that I’d be fine. But I had enough presence of mind to realize that maybe I wasn’t. It probably wouldn’t hurt to get it checked out. So the marina called EMS. While waiting, the adrenaline starting subsiding, which had been hiding the pain. By the time EMS arrived, I realized asking for help had been the right call. The EMS crew agreed, and radioed the Fire Department. It was going to take a whole bunch of people to lift this 200 lb invalid up off the boat, onto a dock, and into a gurney. 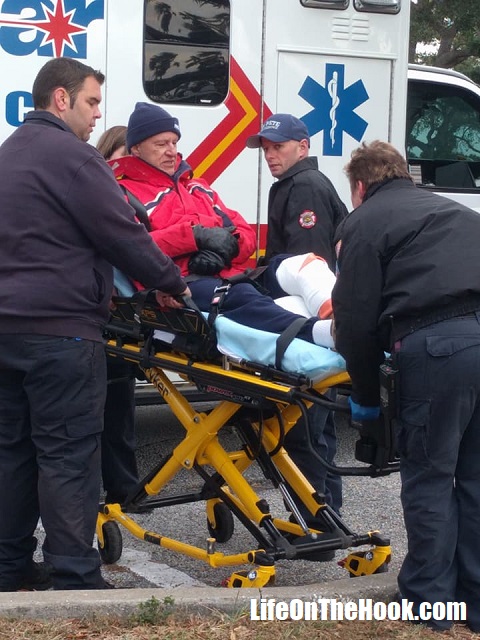 The day had started as just one of those days where life had tossed us a little challenge that we often encounter in our Life On The Hook™. But in the blink of an eye, everything had changed, and now I was taking my first ambulance ride.

One thought on “In The Blink Of An Eye”