We cruise on what is commonly called a “production boat.” This means Eagle Too is the nautical equivalent of a Chevy or Ford. There are those who say production boats are unsuitable for cruising. We say that’s nonsense. But our recent visit to the St Petersburg Boat Show has me wondering whether that’s still true for the new models now being produced. While we enjoyed the opportunity to climb aboard a variety of boats and inhale that new boat smell, some of what I saw truly horrified me. Designers have in many cases focused on building very expensive houseboats with a mast. They have automatic dish dryers, wide screen televisions that disappear into hidden compartments and multi-channel surround sound, but I think trying to take them to sea in anything but the most benign conditions would be highly inadvisable.

Here are some examples, in no particular order. For starters, what’s wrong with this picture? 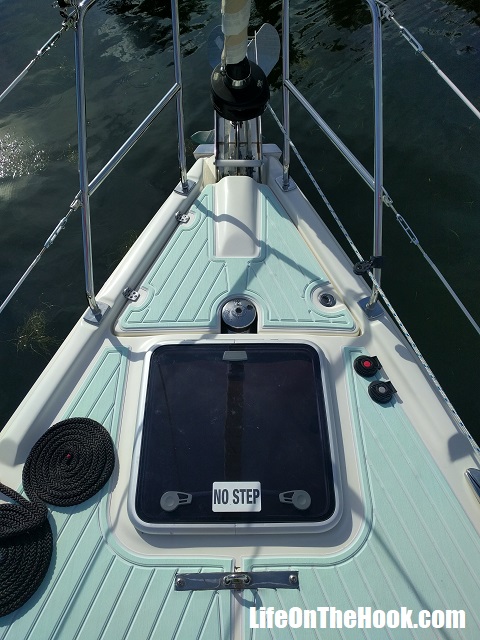 Can you imagine trying to reset a dragging anchor in the middle of the night while having to straddle that hatch? To show you that this isn’t a quirk of just one builder, here’s another example from a different manufacturer. 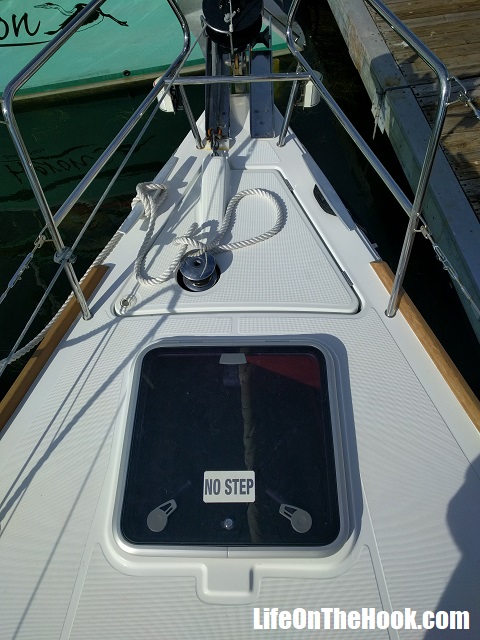 Let’s just put a big fragile hatch with a No Step sign right where you absolutely need to stand while anchoring. By the way, did you happen to notice that these hatches open the wrong way if you want to catch the breeze while at anchor?

Another common “feature” is the long, projecting bow roller assembly necessary to allow the anchor to clear the plumb bow that’s all the rage with designers today. I observed that while this assembly was almost the equivalent of a bowsprit due to how far it projected out the front, the gauge of steel wasn’t anywhere near robust enough to stand up to the forces of a boat surging and sailing at anchor in a blow. The stainless looked to be about half the thickness of that on our boat’s bow roller, and would probably fold up like cardboard if you loaded it up laterally, as is common with the boat swinging about when anchored in storm conditions. 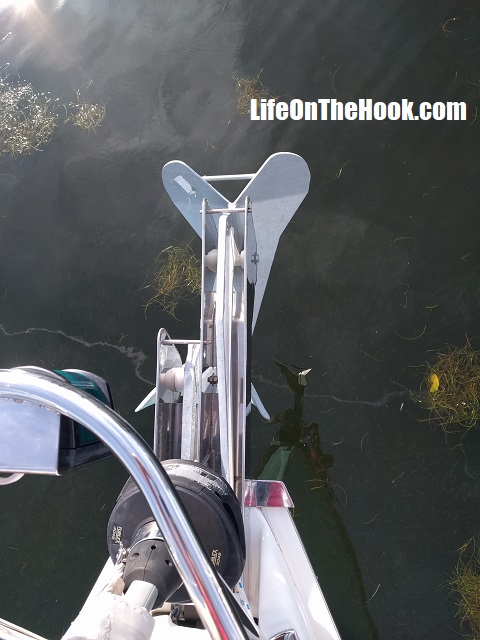 Next, imagine trying to work on these foredecks in any kind of sea state. Other than the lifelines, what the hell could you hold onto to keep from being pitched overboard? 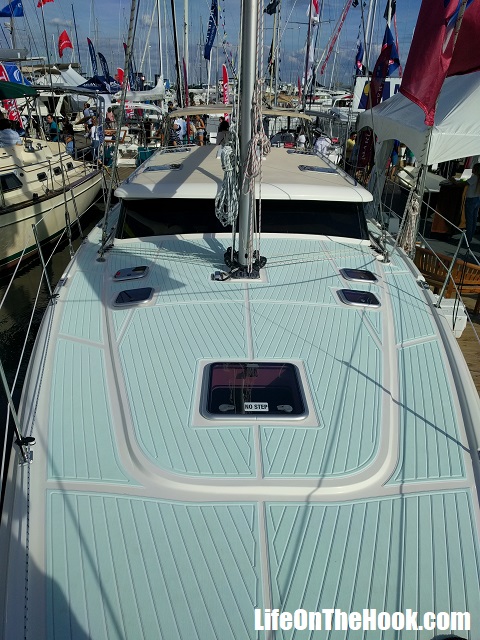 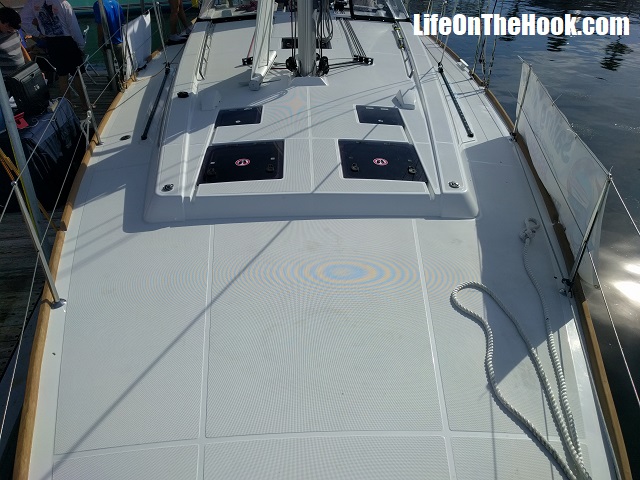 Look how far it is to the nearest handrail. 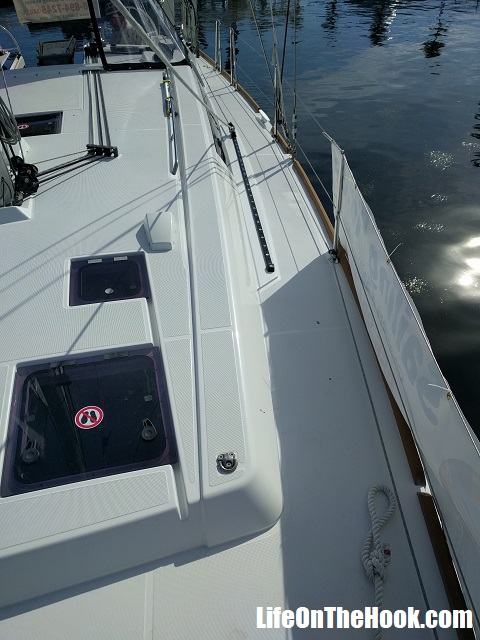 Now I don’t know about you, but when we’re underway, we spend a lot of time behind the wheel. We have a big comfy West Marine captain’s seat, the one with the armrests, that whoever has the helm uses. 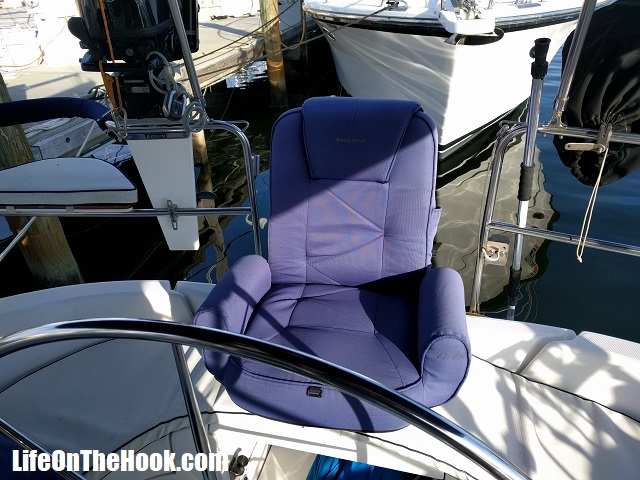 But on so many of the boats we looked at, the helm seat was treated as a major annoyance that looked like the designer was forced to include against their wishes. It was obviously much more important to design it to easily fold out of the way in order to open up the wide stern tailgate than to actually provide the helmsperson a comfortable place to sit. 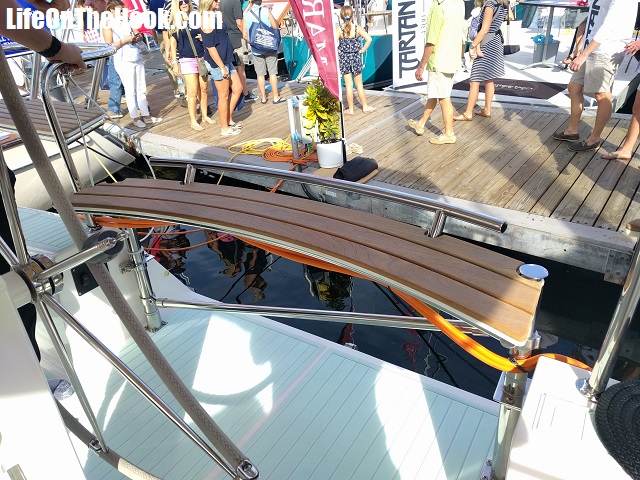 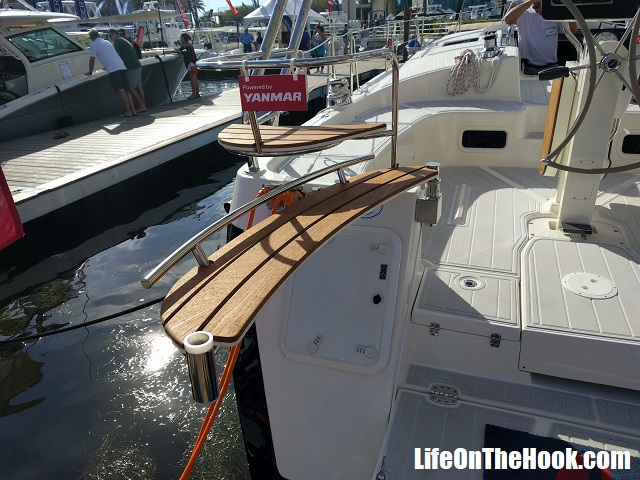 There’s not enough room on these little planks to use our big blue chair, much less stand a four hour watch in rolling seas.

Another current design trend is to carry the boat’s maximum beam all the way aft. While this creates enormous space down below, this also results in huge, open cockpits. Cockpits with practically nothing to brace against when the boat heels to the breeze. Just imagine how far the fall would be to the far side of this cockpit if you slipped off the seat with the boat heeled 20 to 30 degrees. If you were lucky, maybe the lifelines on the far side would stop you. Or maybe they would just carve you up like a cheese slicer as you fell overboard. 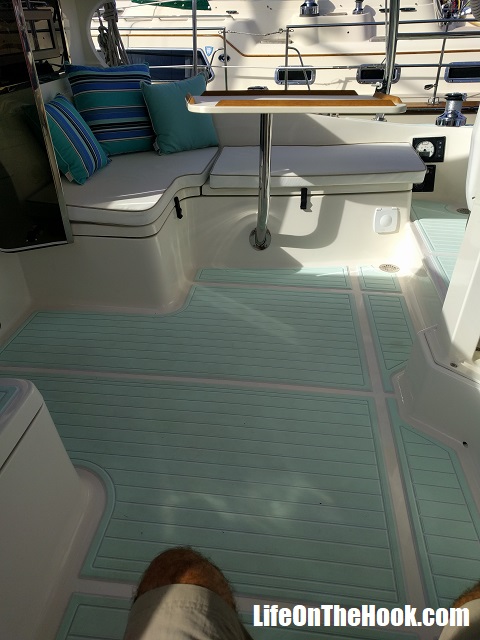 The builders made a subtle acknowledgement of the problem by molding these little toe-stubbers into the cockpit floor on some boats. Yes, this is all you get to brace against to keep yourself in place while surfing down eight foot rollers. 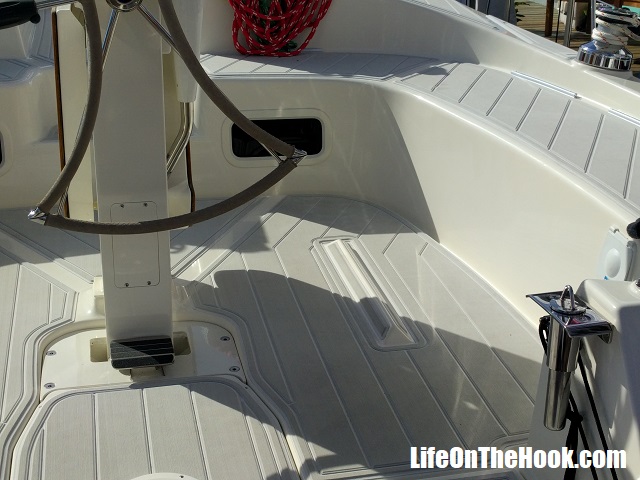 Or you could perch on the little plank (with no backrest) that’s provided for the helmsmen. But at least you have the room to hold a Mambo contest in the cockpit if you wanted to.

That wide beam also leads to open, airy salons down below. But tell me how exactly you’re supposed to maneuver around this cabin in any kind of sea state. I guess you just pick your next point and launch yourself towards it, as there’s nothing to hold onto in route. Hopefully you’ll make a soft landing. Or maybe they expect you to crawl. But hey, it has an icemaker! 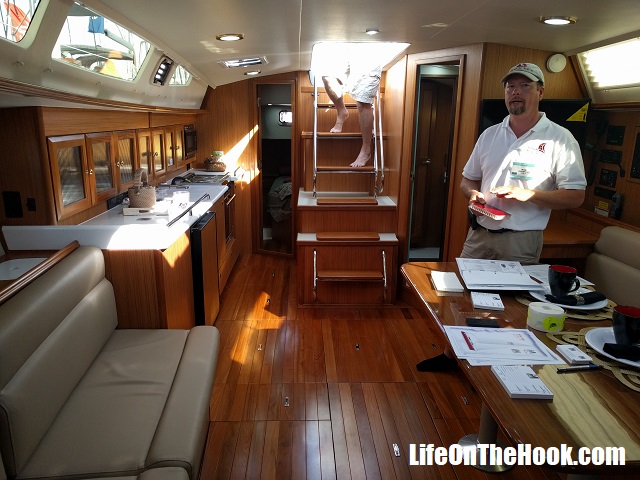 And do you happen to see anything to hold onto as you try to exit the salon on this boat and climb up to the cockpit? 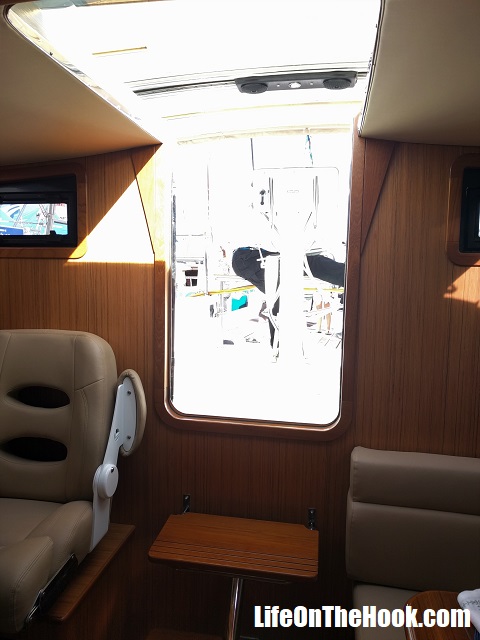 Sometimes I like to operate the occasional breaker on our boat’s main breaker panel. You know, like if the sun sets and we want to turn on the running lights, or we’re craving some tunes and want to turn on the stereo. Things like that. But in new boats, I guess people don’t do those things anymore, because getting to the breaker panel requires you to crawl over the settee. 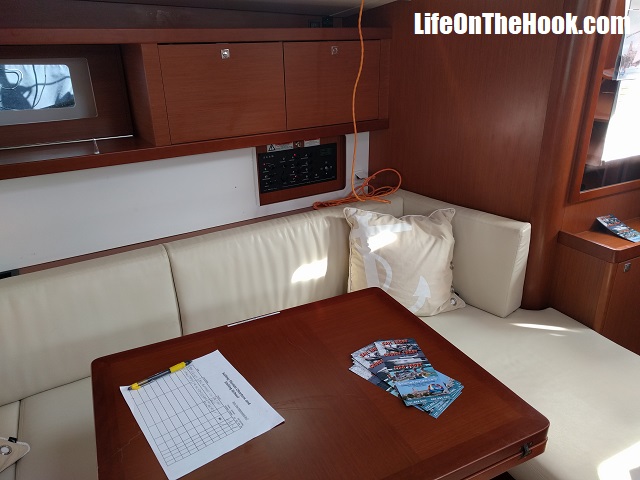 And I suppose I’m just being a cranky old salt, but occasionally we do like to start our engine, which means we need to be able to reach the throttle and shifter. But I guess if you own one of these expensive new dock queens, such things really don’t matter. So the throttle/shifter is located where you have two choices — you can either reach through the wheel, or you can squeeze your arm through the 3 inch gap between the wheel and the coaming. 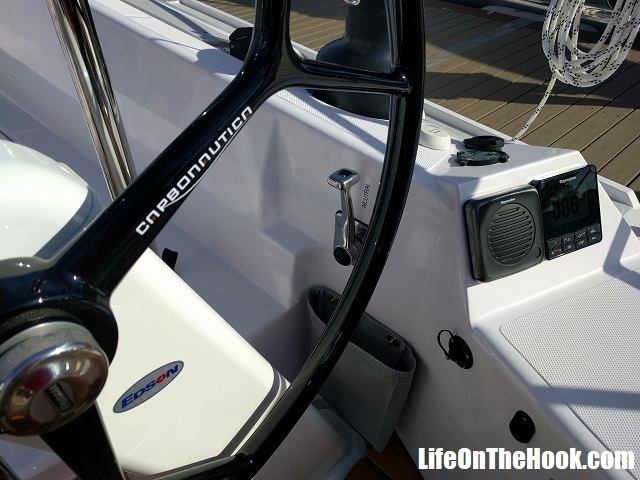 There’s more, but I think you get the point. Pony up a half a million dollars, and you too can have a boat that looks and smells wonderful. But actually take it out in anything more than a Force 3 wind? Forget it!

4 thoughts on “The Designer Gods, They Must Be Crazy”