Rhonda and I have never been to a major boat show. We’ve attended some local hometown ones, but never one of those major metropolitan on-the-water tributes to nautical excess. So when we found out that the St Petersburg Power and Sailboat Show, billed as the largest boat show on the Gulf Coast, was happening right next door shortly after our arrival here in St Petersburg (purely a coincidence, as we had no idea it was in the works), we decided to attend. Particularly since they were giving free admission to military veterans. 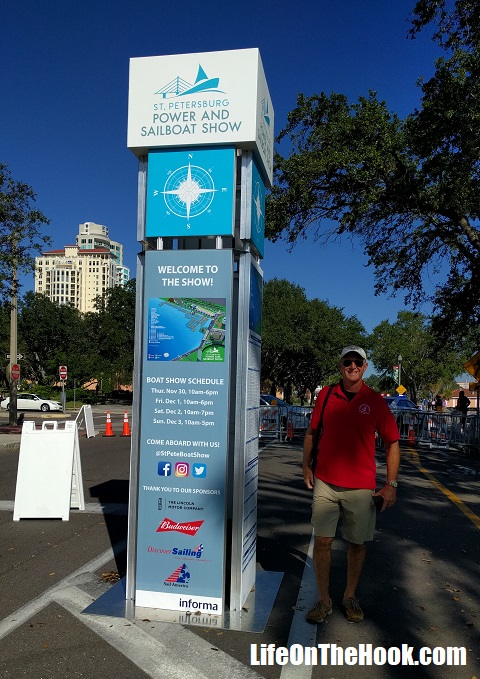 It was amazing to watch the progress as a huge marina appeared from nowhere in the empty basin just south of where we’re docked. In a few days, docks and slips for hundreds of boats were set in place, complete with utilities, while several enormous exhibitor tents bloomed. 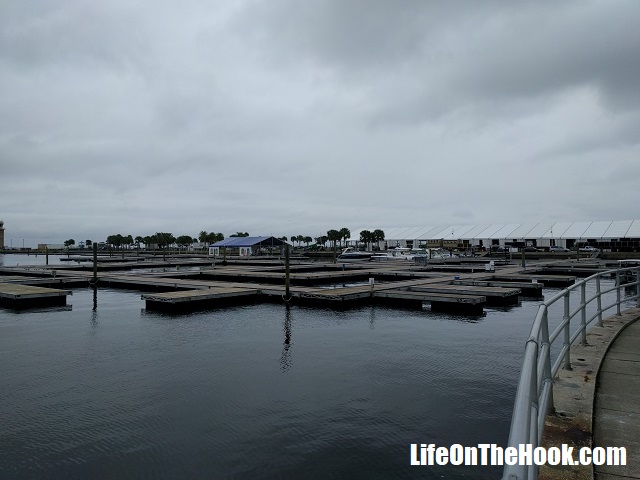 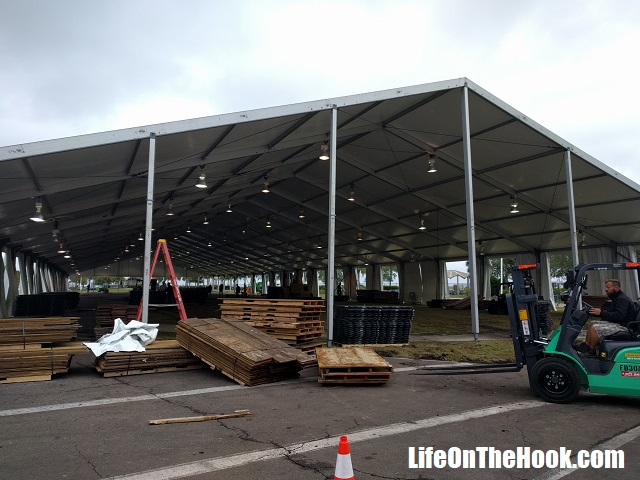 Once complete, hundreds of vessels of all shapes and sizes, dressed in their boat show finest, motored into the harbor and took their places along the piers, while hundreds of smaller boats were trailered into line along the shore. 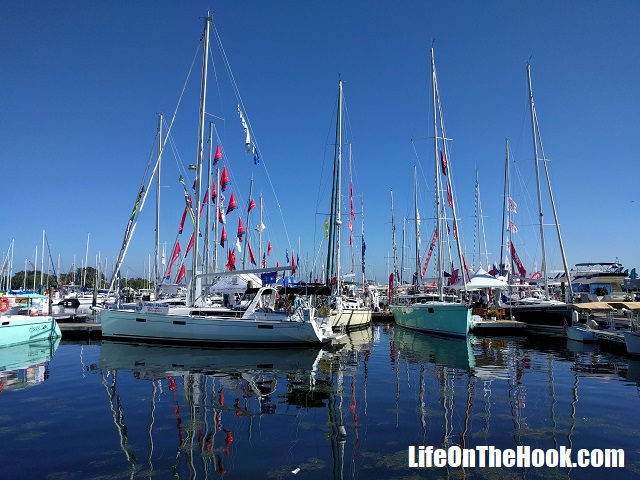 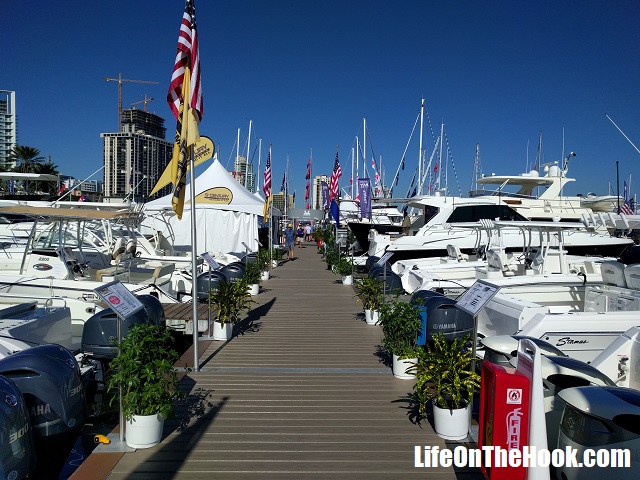 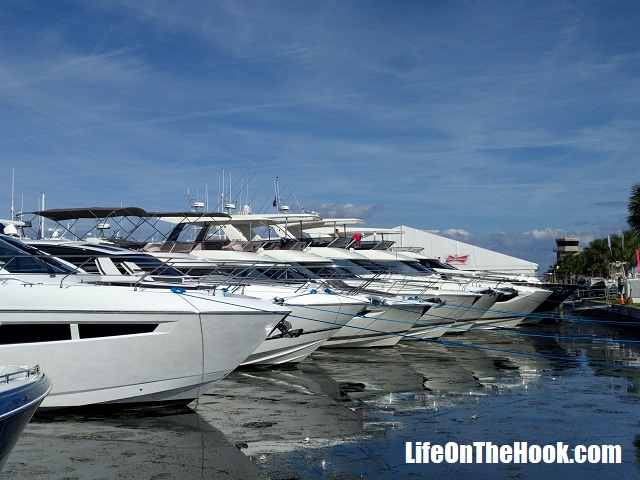 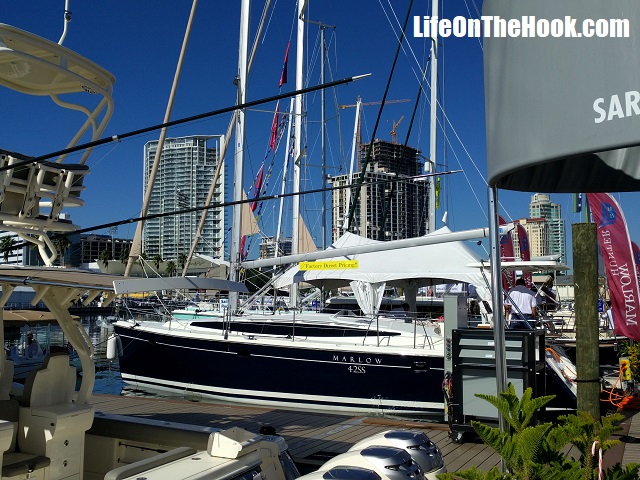 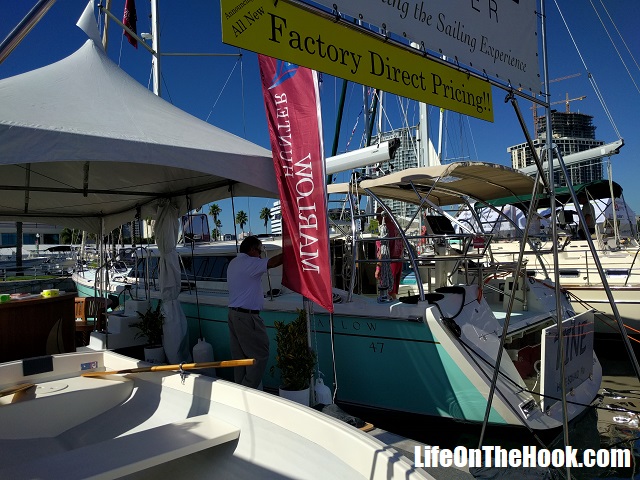 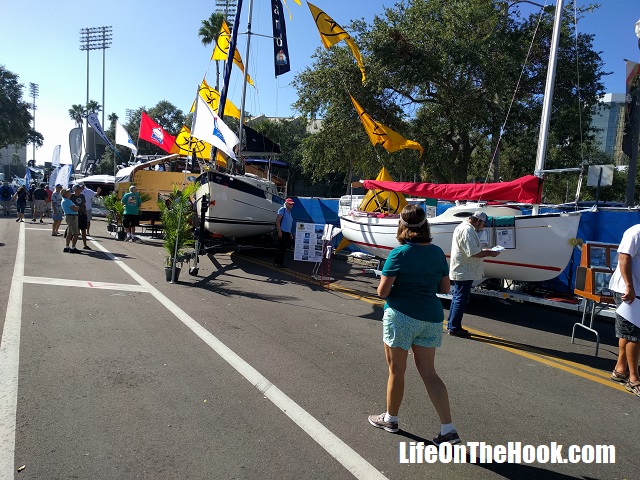 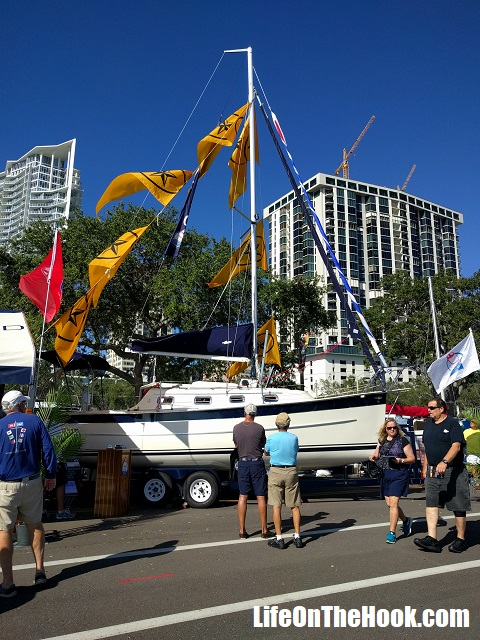 There are probably a lot of things I could say about the experience, but the biggest takeaway was a general amazement at how much money there must be floating around waiting to be spent. Because the prices on these vessels were jaw dropping. We saw center console fishing boats that cost over $750,000. Oh sure, they had some nice LED lighting, plush upholstery and every form of marine electronics known to man, but they were still basically just tricked out 34 foot fishing boats. Or for a cool $1.5 million, you could pick up a 42 foot flybridge cruiser, with an outdoor galley on the swim platform and a 55” TV in the salon. But not to worry, financing was available with easy-to-make payments of under $6,000 a month. 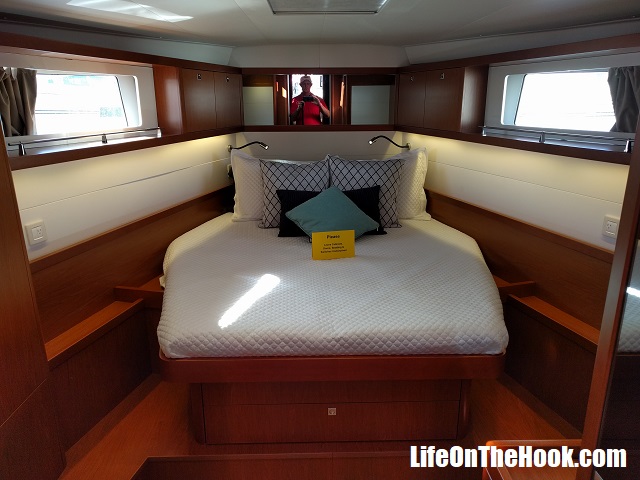 You may have heard of Glamping? Would this be considered Gloating?

Prices in the seven figure range were the norm for anything larger than 40 feet, or not much bigger than what we currently own. It felt at times like we were on a “Lifestyles of the Rich and Famous” excursion, taking a peek at a world filled with people who own private jets and have personal chefs (provided we first took off our shoes and filled out a customer contact card listing our personal info). It was pretty sobering.

Fortunately, the exhibitor tents offered purchasing opportunities for we mere mortals. From dinghies to new engines, water makers to yachting wear, there were definitely deals to be had. 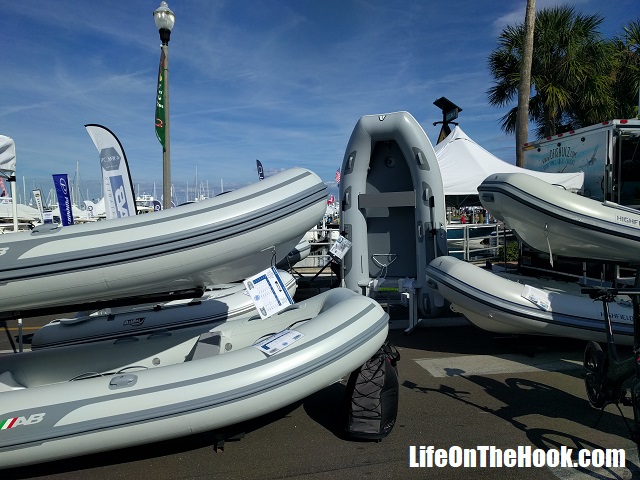 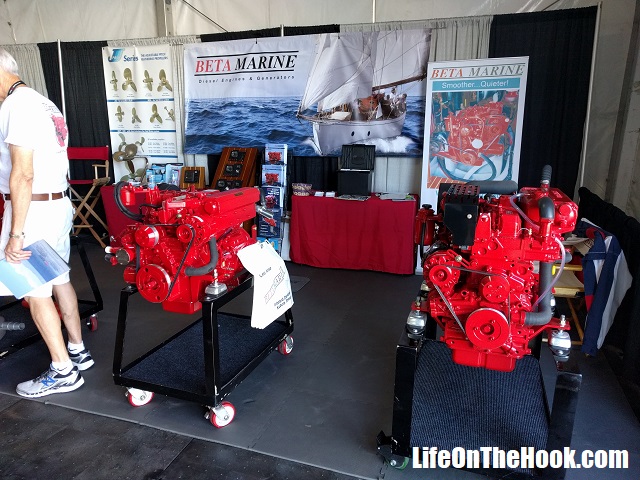 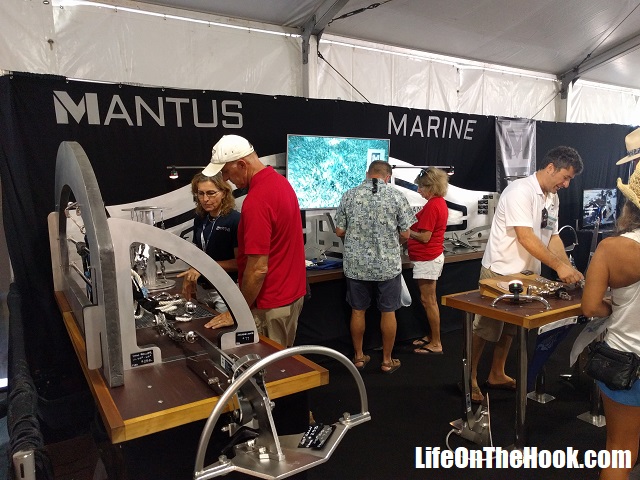 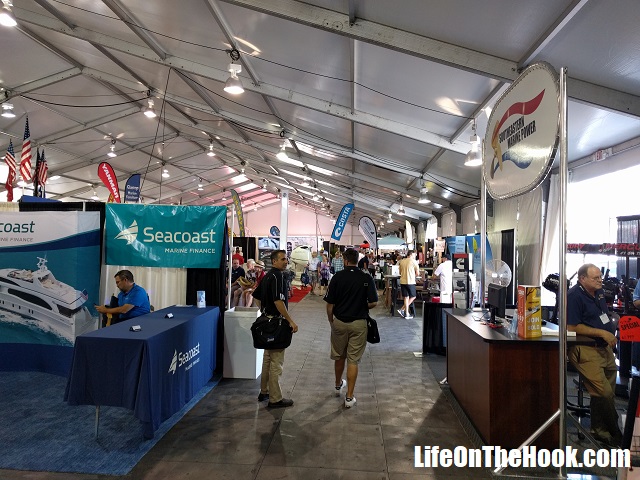 We delayed pushing the button on a Defender order we’d been assembling just in case we could find some of the things we were in the market for at the boat show, and I’m glad we did. For instance, we saved over $80 on a new set of dock lines that we needed, and Eagle Too now sports a shiny new set of earrings that we picked up at the Garhauer booth for only $35 each. 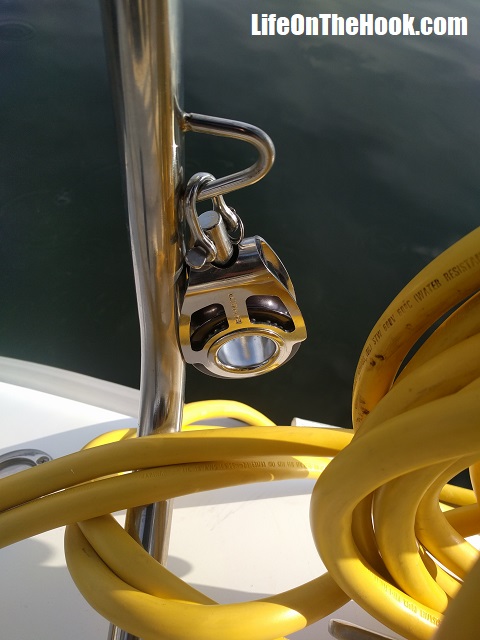 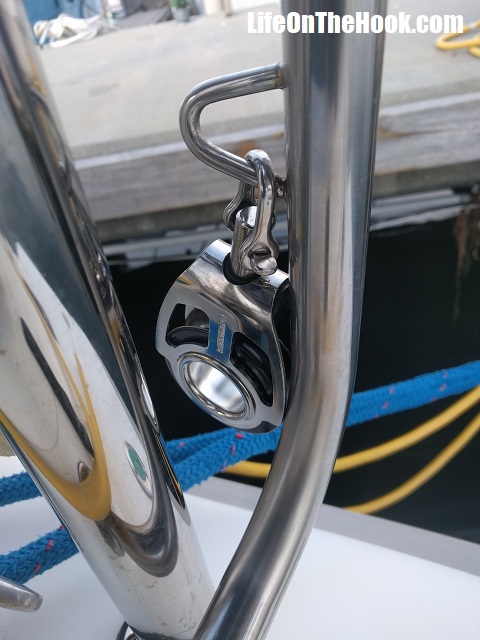 OK, they’re not really earrings, they’re spinnaker turning blocks, but we told Eagle Too that she looked really pretty wearing them.

After chatting up a character known as Bob Bitchin’ from Cruising Outpost (sort of a celebrity in the boating community), we snagged a pair of complimentary passes gaining us entry into the Cruising Outpost party, with live music and free pizza and beer. 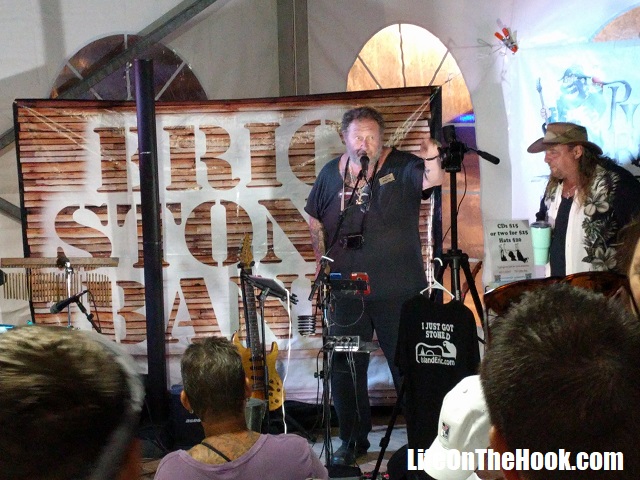 Bob Bitchin’, our host for the evening. 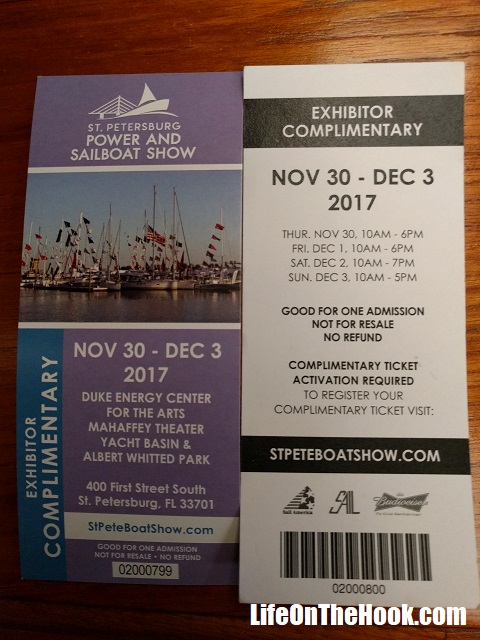 So when you factor in the savings on the items we purchased and throw in a party with free beer and dinner, I feel we came out comfortably ahead financially. 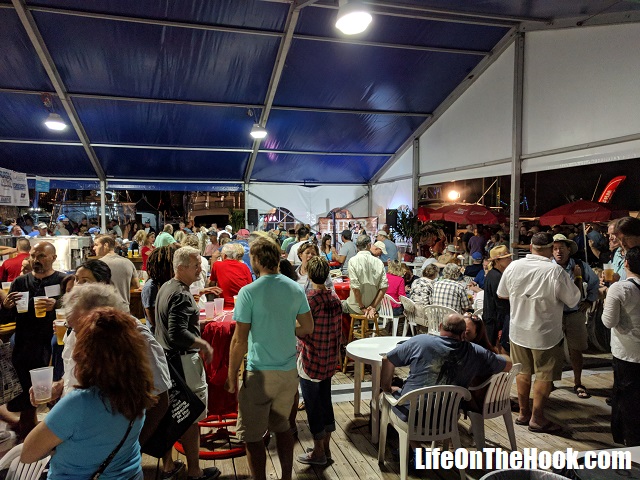 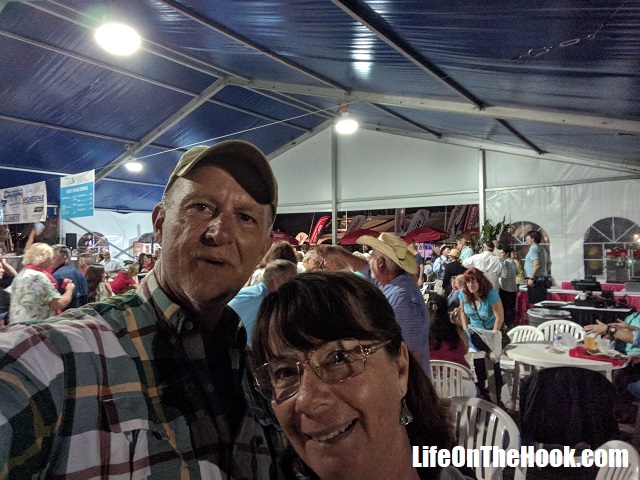 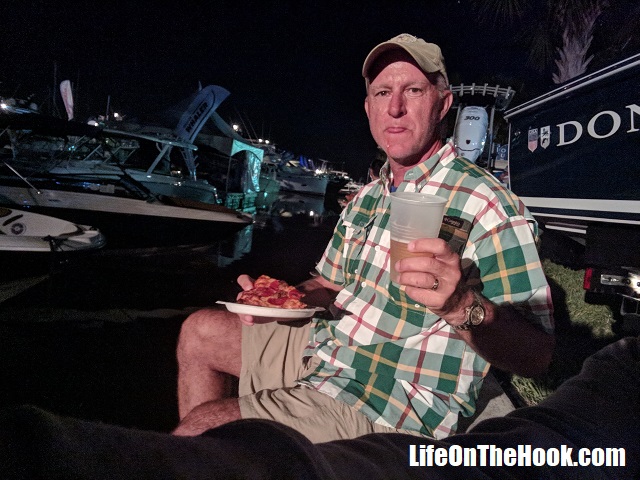 We also had a nice long chat with David Marlow, the owner of Marlow Hunter, which is the home of Hunter Sailboats. It was pretty interesting to pick the brains of the guy who owns the company that built our boat. 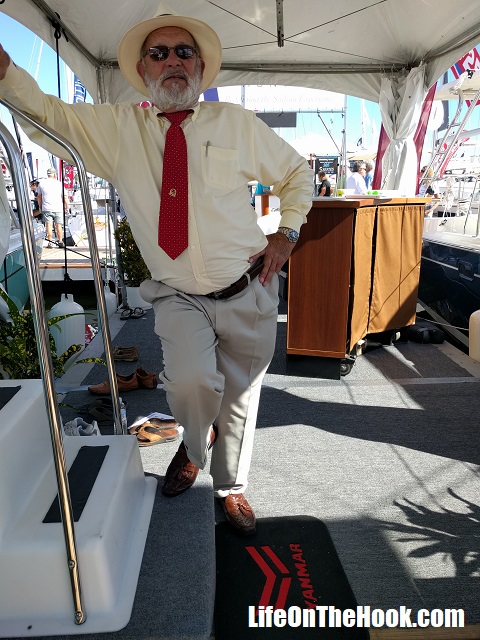 The show was a lot of fun, and I do think that if we ever need to make a major purchase like a new dinghy, waiting for a show like this one can save a bundle. It’s pretty clear though that if we ever hoped to purchase a new boat (i.e. floating palace) like the ones we saw lining the docks, we’ll have to start buying lottery tickets. 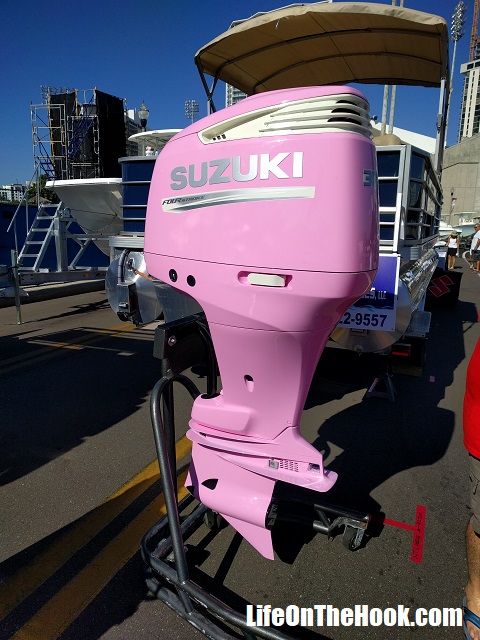 Who doesn’t want a pink outboard?

By the way, I’ll have more to say in another post about some of the things we saw which convinces me that sailboats are now being designed by people who have never actually been sailing. 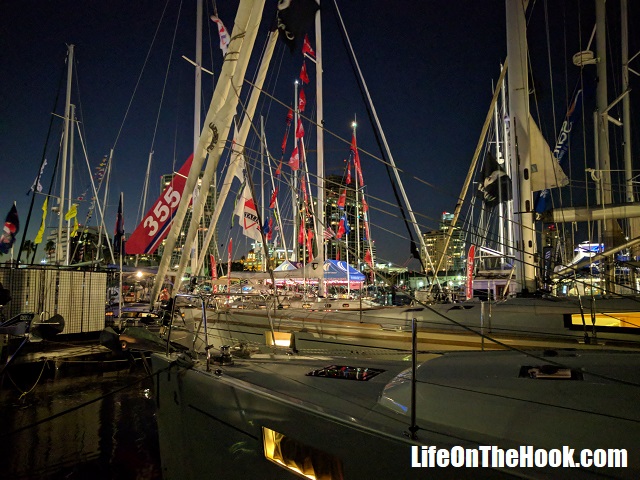