There’s a lot of time to think about things when you’re spending 32 hours motorsailing across the Gulf. One of the many thoughts that crossed my mind during our recent jump from Clearwater, Florida to Port St Joe was the issue of picking a suitable weather window for offshore travel. The criteria for planning a comfortable and thus enjoyable ocean passage is a topic I wish we had known more about before setting off on our Life On The Hook™. But there’s no teacher like experience, and after over a dozen offshore passages of a hundred miles or more, many involving the crossing of a major ocean current, we’ve come up with a list of criteria that we apply when determining whether or not to make a jump. This list reflects our priorities and ours alone. You may have or learn to develop your own list of what’s important to you. But since it’s always good to share knowledge and experience, I thought we’d pass along what we feel makes for the most comfortable passages. 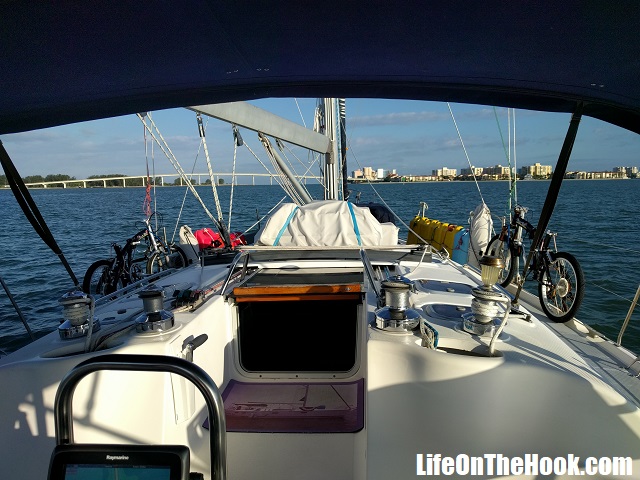 Number one on our list by a wide margin is sea state. When we first started cruising, I’d have considered the wind forecast to be the top concern, but something we’ve learned is that the winds don’t matter if the sea state doesn’t work. When making a go/no go decision, we’re looking for forecast seas of one to two feet. If everything else is perfect or we absolutely have to get moving (which seldom happens because as cruisers we don’t travel on a schedule), then we’ll consider two to three foot seas. But if we see that the forecast calls for three to five feet or more, then forget it, we’re staying put, even if the winds and weather are favorable. High seas make for a miserable passage, which often means missing out on an otherwise nominal weather window because the seas are still too high from a previous weather system.

Now we’ve met some cruisers that will laugh at that. “Three to five foot seas? That’s nothing!” they’ll say. But here’s what we’ve learned. The forecast wave height is for the average sea state. If the forecast is for 1 to 2, you’re going to experience quite a few 3 footers. If they’re calling for 4 to 5, well, you’ll have more than a few 7 footers hitting you. And for us on our boat, this would be dangerous. Not because the boat can’t take it, but because the chance of one of us getting hurt increases exponentially with sea state. In 1 to 2 footers, it’s not too hard to move around, as long as we’re careful and always keep one hand on the boat. It’s possible to put a pot on the stove to make coffee or heat up a meal. Above 3 feet, the boat will start pitching and rolling enough that going below and moving around can be dangerous. The stove gimbal is hitting its stops, which means pots won’t stay put, so it’s strictly sandwiches and water rather than hot food and coffee.  Spending hours holding on to the stern pulpit to keep yourself upright is tiring, and fatigue leads to loss of focus. Then you try to go below, miss one of the ladder steps, and fall into the cabin and get hurt while 50 miles offshore.  Following 5 foot swells cause the boat to roll 25 to 30 degrees or more, and beating into them causes the bow to bash into the waves. It can be tolerated for a few hours. But a day or more? No thank you. 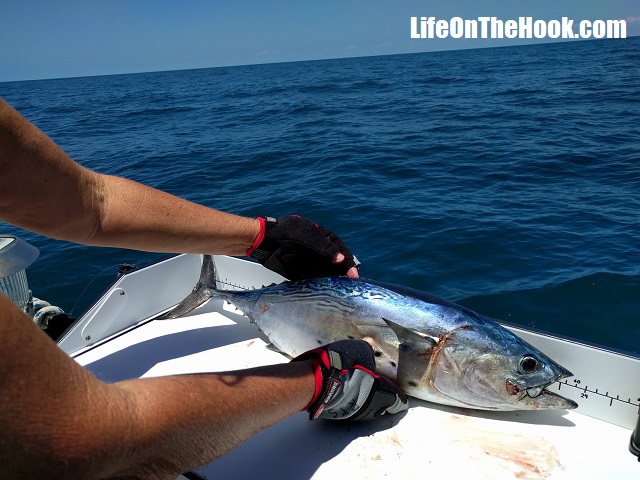 Rhonda Caught A 24 Inch Little Tunny. Related To Tuna, The Gulf Was Full Of Them.

Next we look at forecast precipitation. We live under a 63 foot aluminum pole, and when we’re out on the ocean, we’re the tallest thing by far from us to the horizon. So if they’re predicting thunderstorms, we don’t go. It’s just that simple. Much better to just wait it out in the marina or anchorage, where at least we’re not the only tall aluminum pole around. If the forecast is calling for showers, but not thunderstorms, then it comes down to intensity. A little light rain isn’t that big a deal, we have foul weather gear for that. But if they’re calling for moderate to heavy showers, we’ll probably stay put. It might be different if we had a full enclosure for our cockpit, but we don’t, and there’s only so many hours of standing at the helm in the rain that we can tolerate. If it’s not a day that you’d consider riding a motorcycle, it’s probably not a good day for a passage. 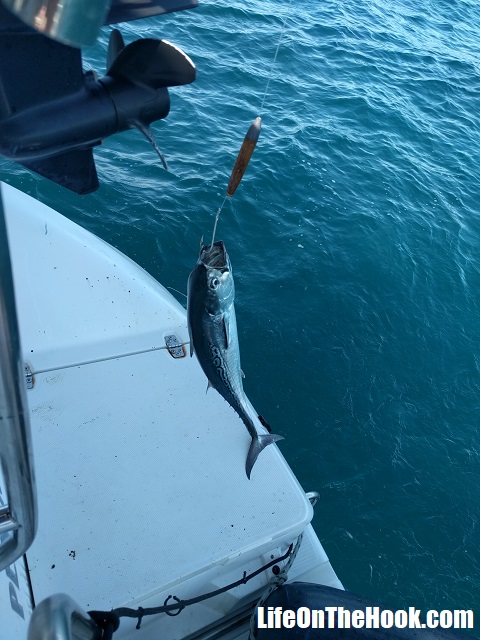 Another Little Tunny. Only 18 Inches, So She Let Him Go.

Now we get to wind. You might think that as a sailboat, this would be higher on the list, but here’s what we’ve learned about wind in our 4,000 miles of travel. It almost never blows from the right direction at the right speed. It’s either too little, too much, or coming from the wrong direction. If we only traveled when the wind was right for sailing, we’d hardly ever go anywhere. So if the prediction is for force 3 or less (up to 10 knots), we’ll go, regardless of the forecast direction. We’ll consider going in a force 4 wind (11 to 16 knots) if it will be behind us, but we won’t go if we’ll be reaching into it, because the apparent wind will be in the 20+ knot range. Greater than force 4, we’re staying put. Even as seasoned a sailor as Bruce Van Sant, author of the cruiser’s bible The Gentlemen’s Guide To Passages South, says that there’s no point in traveling in anything higher that a force 3 wind unless you have no other choice. It’s not relaxing, it’s hard work, people can get hurt and boats can break, and that’s not why we cruise. It’s probably different if you have to be at work on Monday, but cruisers don’t sail to a schedule. We just don’t do it.

So here’s the dirty little secret about sailboats, at least as far as cruising goes. Seventy-five percent of the time, you’re going to be motoring or motorsailing. Only a quarter of the time or less will you actually be able to arrive at your destination under sail alone. So yes, make sure those sails and rigging are in top shape, but also consider adding that three bladed prop, make sure your engine alignment is spot on, and do whatever propulsion system upgrades you may need in order to feel confident about running your engine for days at a time without a break. You’ll probably need a spare alternator or water pump much more than a spare sail. 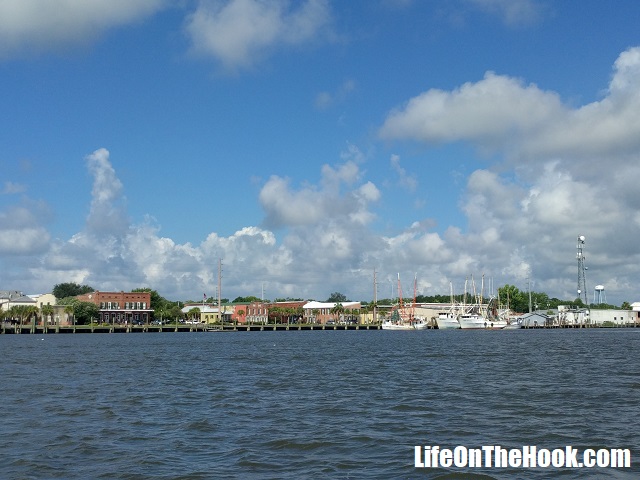 After considering the sea state, rain and wind, we like to take a look at the moon phase. Since you only get one full moon a month, it’s not something you can really factor in to your decision to go if everything else is in alignment. You just take what you get. But let me tell you, spending a night at sea in conditions that require sail adjustments or movement about the deck is infinitely better when there’s actually some light to see by and you’re not totally dependent on a headlamp. And it’s extremely comforting to actually be able to see a horizon at night, especially when crossing a shipping lane full of fast moving freighters or threading through a pack of fishing trawlers. The total darkness of an overcast night with a new moon, where you can hear the waves but can’t see them because the world beyond the lifelines is invisible, can be unsettling. So we like to make long passages during times when the moon is at or near full. 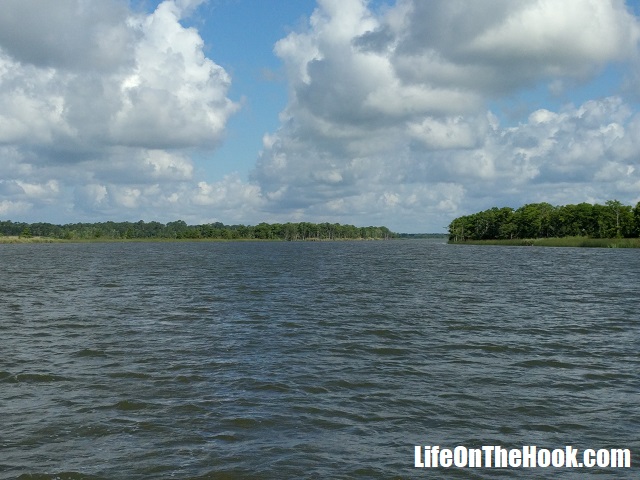 Heading Up The Apalachicola River

Yes, the stars are breathtaking out in the middle of a calm sea on a clear, moonless night while ghosting along under sail in a gentle breeze. But in 14 months of travel, we’ve experienced exactly two nights like that. Every other of the more than a dozen overnight passages we’ve made have been cloudy, dark, rolly, windy, or some combination of the four, while the steady drone of the engine numbed our ears and physically wore us down. 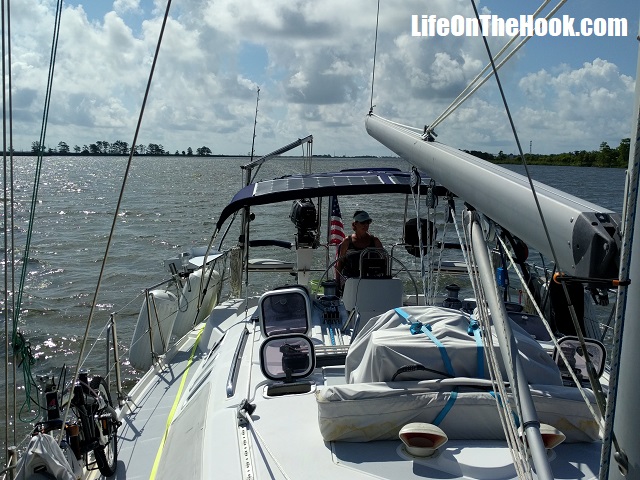 So those are the criteria that we evaluate when determining when to head out onto open water. If you’re one of those people whose response is “we go regardless of the conditions,” or “we sail through thunderstorms and force 7 winds all the time,” I have one simple question for you. Why? I’d like to hear what motivates you to do such a thing. 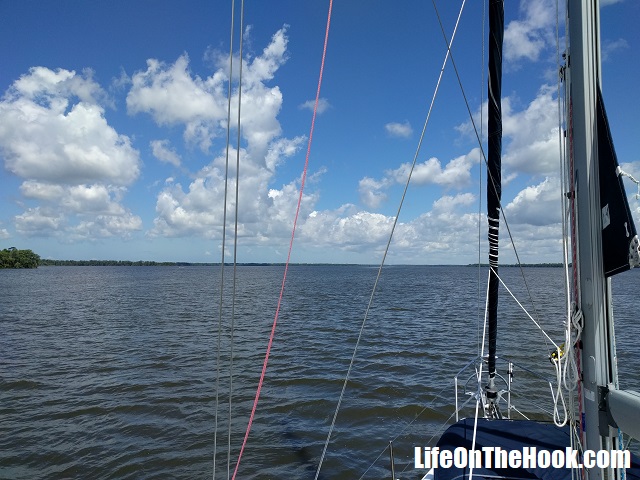 Since much of this discussion probably makes ocean passages sound less idyllic than you may have pictured, some of you may be asking the question, “Is it worth it?” My answer is “Yes, it is.” Passages can be a trial, a measure of determination and a test of endurance. But the return on the investment is that we get to spend weeks, even months visiting some pretty amazing places that most people are lucky to experience for just a handful of days. And in the final balance, that’s what cruising is all about.