Cruising /krōōz-ing/ verb: The act of performing boat repairs in a series of exotic locations.

We’ve learned that when it comes to maintenance and upkeep, a good rule of thumb is to expect to spend about 10% of the purchase price of your vessel on annual maintenance.  If you’re currently only using your boat on weekends and for an occasional vacation trip, you might think that that’s a bit (or maybe a lot) too high. But cruisers use their boats daily and use them hard, and things break or wear out with surprising frequency.  We’re now into our 14th month of full time cruising, and our experience tells us that 10% might even be a little light. We have things onboard that we’ve already had to replace twice. And that’s for a boat that was lightly used and thoroughly refitted before our departure. So for you future cruisers out there, ensure that your proposed budget has that 10% maintenance line built in. Trust me on this one, or you might find your cruising dreams unexpectedly cut short.

So there we were anchored between Key Largo and Rodriquez Key, preparing to get underway for Marathon and the Moser Channel. Rhonda started the engine, while I went up on the bow to raise the anchor. I stepped on the anchor windlass “up” switch, and the rode began paying in as usual. Suddenly, the windlass let out a groan and quit. After years of faithful service, it apparently decided it no longer wanted to participate in our adventure. I had to resort to pulling in our 55 lb. Mantus anchor and chain rode by hand.

We knew we had between two and three weeks of coastal cruising ahead of us in order to make it back to Pensacola, much of it spent in anchorages. That meant a lot of anchoring. And I didn’t think my 59 year old back could play human windlass for that long. We had to have a functional windlass, which means fixing it wasn’t something I could put off until we made it home.

So our quick touch and go in Marathon turned into a maintenance stop. We called Skipjack (formerly Sombrero) Marina, where we knew Scott the dockmaster from previous visits, and he found us a spot along the bulkhead (close to the pool!) where we could plug into shore power and work on our problem.

I pulled the windlass unit out and started overhauling it, and finally got it to reluctantly pull the anchor up. Unfortunately, it would trip the circuit breaker every five to ten seconds. This meant that in order to weigh anchor, Rhonda would have to stay below in the cabin to continually reset the breaker, while I pulled the anchor up a few feet at a time. While this may have gotten us home, I decided this just wouldn’t do. Sometimes things happen out here that require you to move the boat right now, and having to nurse a sick windlass that would need 10 or 15 minutes to weigh anchor was just too risky. 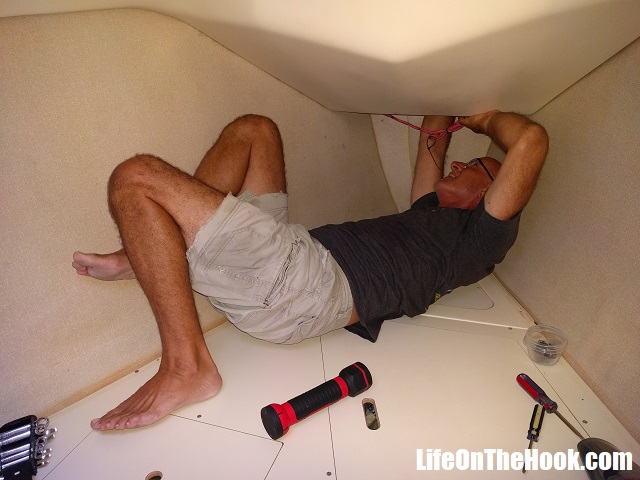 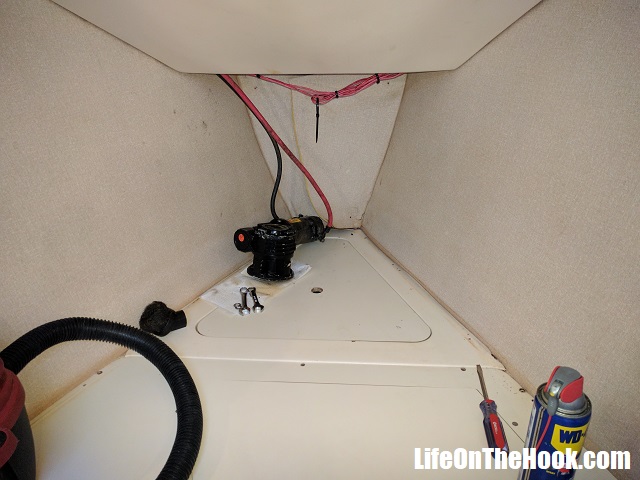 It was decision time. The old windlass was a 20 year old Simpson Lawrence Sprint Atlantic, a model that was no longer made. Even if I could get it working again, it probably wasn’t going to get any better in time, and parts were extremely rare. It looked like we were shopping for a new windlass, to the tune of about two boat bucks.

We tried to look on the bright side. If the windlass had failed just a few weeks earlier, while we were in the Bahamas, replacing it probably would have been near impossible. But since it had had the consideration to wait until we were back in the Keys, we were able to jump online and order a replacement from Defender and have it shipped second day to the marina. Eagle Too just seems to look out for us that way, for which we’re very grateful.

Since Lewmar had purchased Simpson Lawrence some years previously, I checked their website for guidance. The recommended replacement unit for our old Sprint Atlantic was the Lewmar V2. My hope was that it was similar enough to our old unit that it would drop into the existing mounting holes and fit under the anchor locker lid. 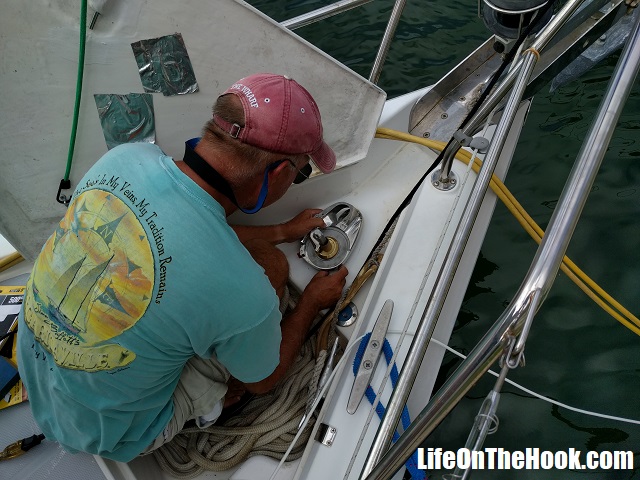 Alas, this was a boat job afterall. Which means that there’s always something unanticipated that has to be dealt with. While the motor and gearbox fit in the existing space and the mounting bolt pattern was the same, the new deck unit was more compact than the older one. The hawsepipe, or the hole in the deck through which the windlass drops the anchor chain into the anchor locker, didn’t align. Which means it was going to take some glass work to make it right.

Now any properly outfitted cruising boat should have some basic fiberglass repair supplies onboard, because you just never know when you might need to do a quick glass job. I chopped up some fiberglass mat and stirred it into about four ounces of catalyzed resin to make a thick slurry, and filled in the forward third of the existing hawse pipe hole. After an overnight cure and some sanding, a quick skim coat of some thickened epoxy and a little more sanding reduced the size of the hole to the right size for the new windlass, and gave me a nice flat surface to ensure the bedding compound (butyl rubber, naturally) would provide a watertight seal. It still needs a little Gel Coat to make it perfect, but that can actually wait until we’re home again. 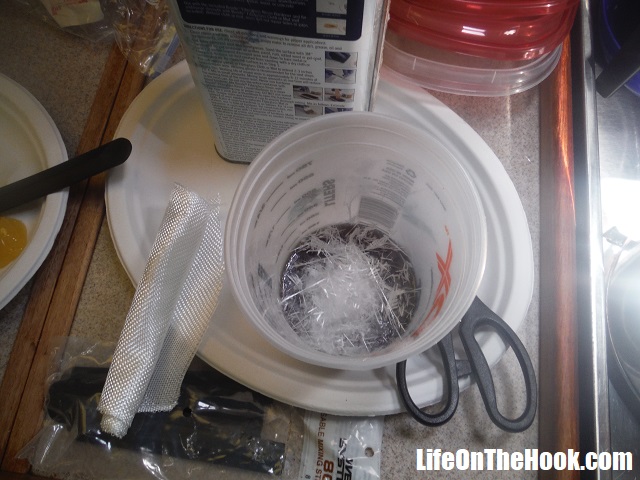 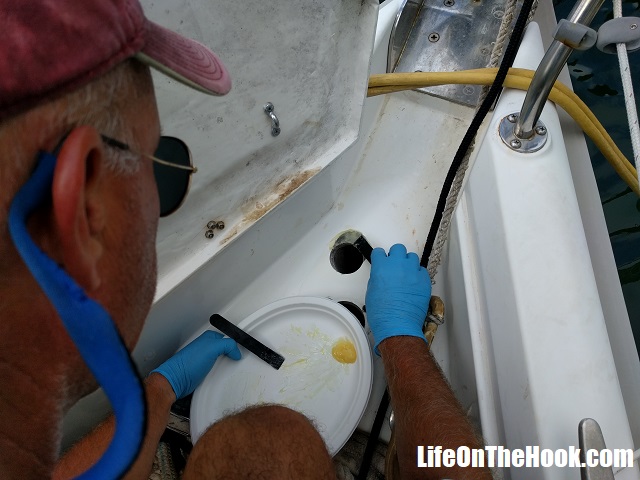 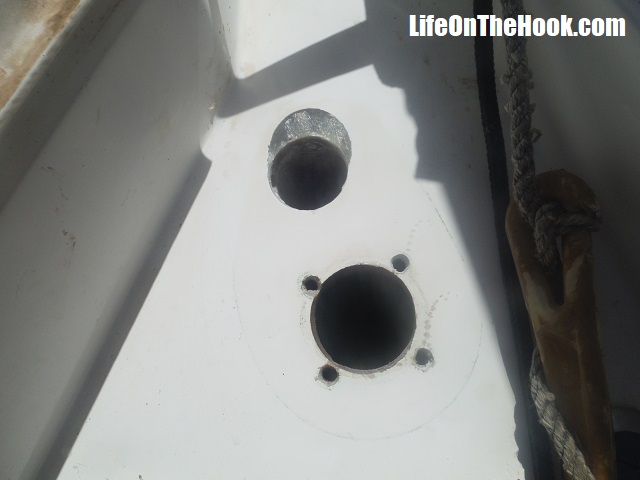 Top Half of Hawsepipe Filled With Epoxy

Then there was the little matter of needing an additional electrical cable to power the motor, as the old windlass used a pair of 2AWG battery cables and this one required a third. So it was off to West Marine for 25 feet of battery cable. And of course, the windlass solenoid and breaker had to both also be replaced. But after about five days, we once again had a working windlass, which wonder of wonders, just fit exactly under the anchor locker lid, even though it was a full inch and a half taller than the old one. I just knew I was going to have to cut a 5 inch hole in the anchor locker lid for the capstan to protrude through, and whooped with delight when I finally had everything bolted together and attempted to close the lid and it actually shut! 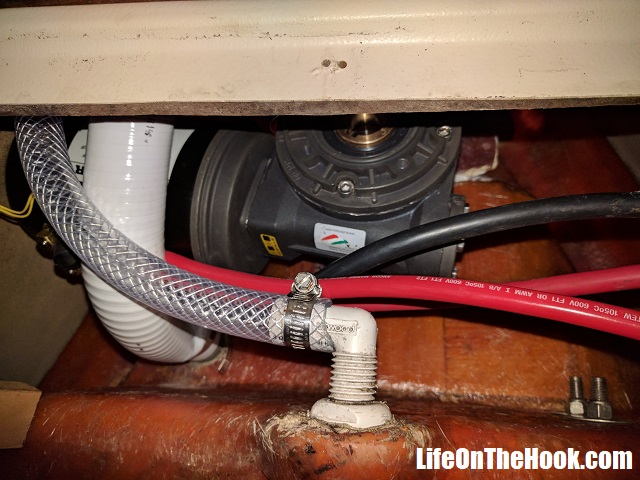 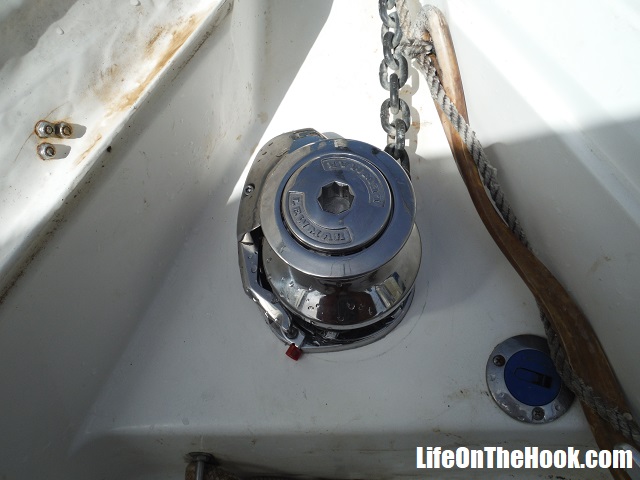 So Nice And Shiny! 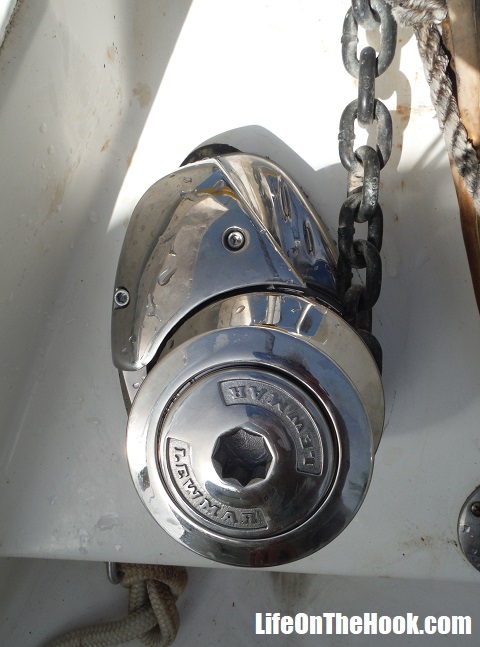 Then the level sensor in our shower sump box failed, but that was only about a 30 minute fix, since we had a spare sensor onboard. And then we noticed water in the bilge, which isn’t right since ours is bone dry. I traced it to a failed air conditioner condensate venturi, which was allowing the AC condensate to dribble into the bilge rather than be sucked overboard as it should. So since I was already working on the sump box, I took a day and yanked out the venturi and plumbed the AC drain pan to the shower sump. It’s a job I was meaning to do anyway once we made it home, and the air conditioner seems to be working so much better now that the cooling water flow is no longer restricted by the venturi.

So our quick pit stop in Marathon turned into a $3,000, week long mini-refit. After seven days of living in a torn apart boat, we were tired and cranky and so very glad when we were finally able to get the cabin put back together and just relax for a couple of days.

As we enter June (and the beginning of hurricane season), we’re close to halfway through the year, and we’ve spent about half of our anticipated annual maintenance budget. So our advice is that unless you’re starting out with a new boat that’s still under warranty, make sure you set enough aside for those inevitable repairs. And remember, that 10% figure is just for parts and materials. If you have to pay someone to do all of these basic maintenance tasks for you, you’ll need to at least double that amount!

4 thoughts on “Maintenance in Paradise”