The following is a true story. Identities have been concealed to prevent hurt feelings.

One of the reasons to read cruising blogs it to learn from the experiences of those who are out here living the life. Study their mistakes so that you can hopefully avoid making the same ones yourself. Well, here’s a cautionary tale about a total screw-up we made that ended up costing us a whole lot of time and took a huge bite out of our meager cruising budget. It’s the story of the thousand dollar box.

It all started with what we thought was a rational decision. Rhonda needed some medications refilled. Her doctor had written her several prescriptions prior to our departure, and our plan was to have them filled in the Bahamas. But it turned out that it wasn’t going to be that simple. While in Nassau, we called a local pharmacy, which referred us to the local hospital. When we called, the nurse we spoke with told us that we would first need to make an appointment with a Bahamian doctor to countersign the prescriptions, and then the pharmacy would most likely have to order one of the two meds Rhonda takes. We were only in town for a few more days and had only limited access to transportation, so the logistics of it all started to seem a little too complex. There had to be a better option than renting a car and paying a doctor and then waiting for ordered drugs to arrive when we really wanted to keep moving south. So we kicked the can down the road and decided to wait until we arrived in George Town. They dealt with hundreds of cruisers every year, most of them retirees like us and undoubtedly many of whom took various medications. Our plan B would be to put Rhonda on a plane to fly home and get her prescriptions filled, since Delta has daily flights from George Town. If we could find a good place to leave the boat, maybe I’d also come along and we’d take a little vacation from our permanent vacation.

During the few stops on our way south where we had internet access, I started looking up airfares from George Town to Pensacola, and discovered that it was going to be $800 to $1000 for just Rhonda to fly home. Flying both of us back for what was a non-emergency was just out of the question.

But then we started considering another possibility. Maybe a family member back home that had a long relationship with a local pharmacy there could get refills for Rhonda and ship them to us. How much could it possibly cost to ship a small box to the Bahamas from the US? Sixty or 80 dollars maybe? Much cheaper than trying to fly home.

Once we started kicking the idea around of having Rhonda’s prescriptions mailed to us, we began talking about some other things we’d like to have but couldn’t find in the Bahamas, like some Starbucks espresso for me and a few boxes of that precooked packaged bacon that Rhonda likes. Turn the shipment into a care package. So we put a short list together that came to about $200 worth of groceries and things and emailed it home (that might sound like a lot, but four bags of Starbucks was $50). The family member in question likes doing that sort of thing after all, performing thoughtful little tasks to help out.

So about this time, we dropped anchor in George Town, where our first order of business was to look into shipping options and a local address where we could have a package sent. It was while doing this research that we found out that my suspicion about George Town was true – they were used to dealing with older cruisers and their prescriptions. We were referred to Smitty’s Pharmacy, about two miles north of town, where we were told we could get whatever Rhonda needed.

Two miles? OK, a bit far to walk, and being frugal cruisers on a limited income, we didn’t really want to spend $20 on a roundtrip cab fare. But this being the Bahamas, we did what cruisers do here—we started walking, while I stuck my thumb out whenever I heard a car coming. And in less than five minutes, not only did a nice local pick us up and take us to Smitty’s, but offered to come back and pick us up for the return trip to town.

So Rhonda stepped up to the pharmacy window at Smitty’s and explained what she needed, and after a bit of discussion about doses and quantity, the pharmacist gave Rhonda her drugs. No need to see a local doctor. Hell, the pharmacist never even asked to see the prescriptions, which Rhonda had brought along. He just took her word for it and gave her the drugs, at a total cost of what just the copay would have been back home. We even threw in a pack of Stugeron, which is this awesome anti-nausea drug that I wanted Rhonda to try for her occasional sea sickness that is available everywhere in the world except the US because of some problem with the FDA. When we tried to get another box of it a few weeks later back in Nassau, we were told it was only available via prescription! 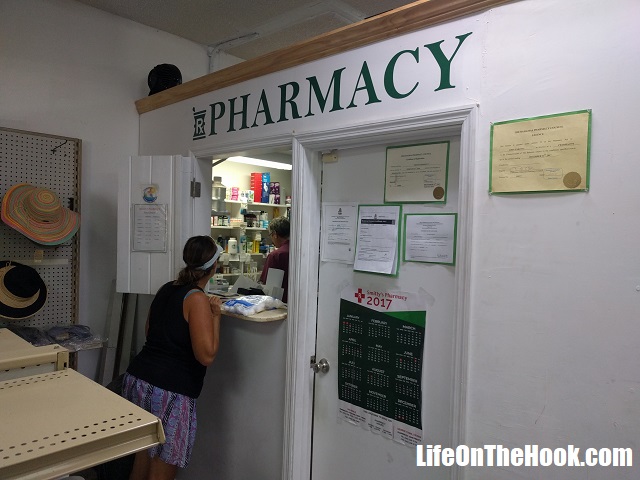 So with filled prescriptions in hand, we started to head back into town, and soon find ourselves on a school bus filled with refugees from the disastrous Fyre Festival that had just imploded the night before. That’s a whole ‘nuther story that maybe we’ll take up another time, but if you’re curious, just google Fyre Festival and you’ll get a sense of what happened.

And it was at this point that we made our thousand dollar mistake. Once we were successful in getting Rhonda’s prescriptions filled, there really wasn’t any need for the care package to be sent from home. But because we knew that at this point several family members were involved, and I really did want the expresso, we still thought we’d spend the $60–$80 that we thought it would cost to get the box of goodies.

So the box got shipped UPS second day international. Now second day shipping means nothing in the Bahamas. Yes, it made it from Florida to Nassau in two days, but then it apparently got deposited in a customs warehouse that I envision as being similar to the one at the end of Raiders of the Lost Ark. 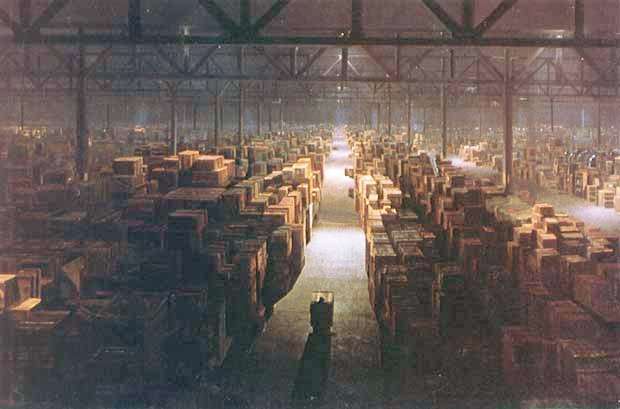 Now we weren’t in Nassau. We were in George Town, about 150 miles south. And no one could give us a clear idea of when or if the package would make it to us.

So then the fun really began. While waiting for someone at UPS to get back to us about a delivery date, we started looking at the receipts for the box contents and shipping that our family member back home emailed us. And almost passed out. Because what we just assumed was going to be a $60–$80 shipping fee was actually almost $350.

“That can’t be right,” I said with alarm. “Surely someone would have called us before spending $350 to send a box with less than $200 worth of stuff in it, none of which we actually need.”

But there it was in black in white, and we felt sick to our stomachs over the hole it blew in our budget. Now I guess that was on us, because we had just assumed that shipping a box from Florida to the Bahamas, a distance of just a few hundred miles, shouldn’t cost much more than shipping it to Atlanta or Miami. Oh sure, there might be an import fee, but the actual shipping shouldn’t cost that much more. Boy were we wrong. We hadn’t given our helpful family member a budget ceiling. But still, a call might have been nice.

And it kept getting better. We were finally contacted by UPS, who told us we owed 35% import duty on the box’s contents before Customs would release it. We’d carefully explained to our family member back home that we needed the box clearly labeled “S/V Eagle Too Yacht In Transit” to avoid import duty, and they had dutifully complied. But for reasons that we could never quite understand, we still got dinged for duty. And the icing on the cake is that they charge import duty on shipping fees! So we had to pay a 35% duty on the $200 box and the $350 shipping. Are you adding this all up?

So then we get to the final piece in this sad tale. We’ve now been in George Town for 10 days, and we’ve had about enough of the weather and the extremely rolly anchorage. The Family Island Regatta was over, and there really wasn’t any reason for us to hang around except to see when this package might finally show up. Meanwhile, a weather window had opened that we wanted to take advantage of. We’d had the crap beat out of us getting down to George Town (there will be something about that in a day or two) and we wanted to avoid more of the same on the return trip. So we called UPS in Nassau and told them to just hold on to the package, because we were coming to get it.

We needed to be out of the Exumas in a few weeks anyway for insurance reasons (hurricane season is approaching), and we knew we were probably going to head north, but a stop in Nassau really wasn’t in the plans, because it’s an expensive place to hang out. But back we went, returning to Palm Cay Marina, where we spent $80 a day for three days (plus power and water) because we pulled in on a Friday afternoon and didn’t think we’d be able to get our box until UPS opened the following Monday.

As it turned out, UPS delivered the box to the marina office for us, and it was there waiting for us when we tied up on Friday afternoon. But we’d already committed to a three day stay when we had called several days earlier to make the reservation, so there you are. 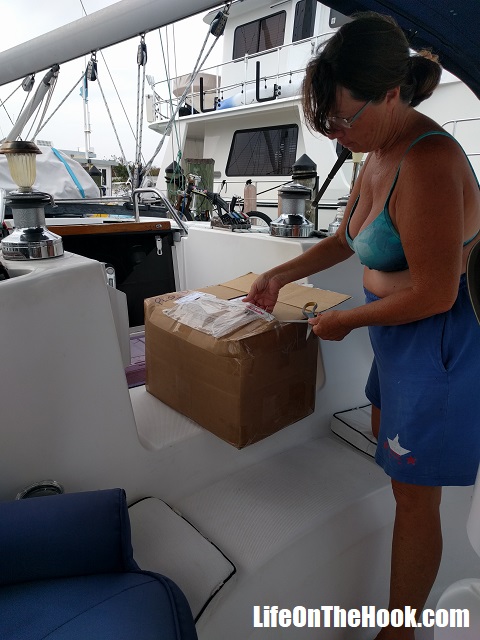 A box containing less than $200 worth of groceries that we really didn’t need since we’d managed to get Rhonda’s prescriptions filled in George Town. $350 to ship that box to Nassau.  About $120 in import duty, which no one can explain to our satisfaction why we had to pay since we were a yacht in transit. And then about $300 in marina fees to return to Nassau to pick up said box. And now we sit here enjoying my $10 a cup Starbucks while Rhonda savors her $8 per strip bacon.

Let this be a warning to you…

2 thoughts on “The Thousand Dollar Box”