When we set out from Pensacola last December, we only had three firm objectives in mind in what was otherwise a vague and flexible agenda. The first was to spend the holidays in St. Petersburg. The second was to enter the Bahamas through Bimini. And the third was to spend the last week of April in George Town, Great Exuma.

We love St. Petersburg, and have basically adopted it as our second home. And our decision to cross to Bimini was driven by a wish to make the quickest possible Gulf Stream crossing. But why be in George Town by late April? One reason. We wanted to enjoy the 64th annual Family Island Regatta.

What is the Family Island Regatta? For Bahamians, it’s the America’s Cup meets the Kentucky Derby, with some Super Bowl thrown in. As an island nation, the folks here love their boats. Particularly sailboats. And sailboat racing is a major passion. Islands compete against each other to see who has the best sailors and the fastest boats. And each year since 1954, the best of the best have congregated in George Town for the Family Island Regatta. 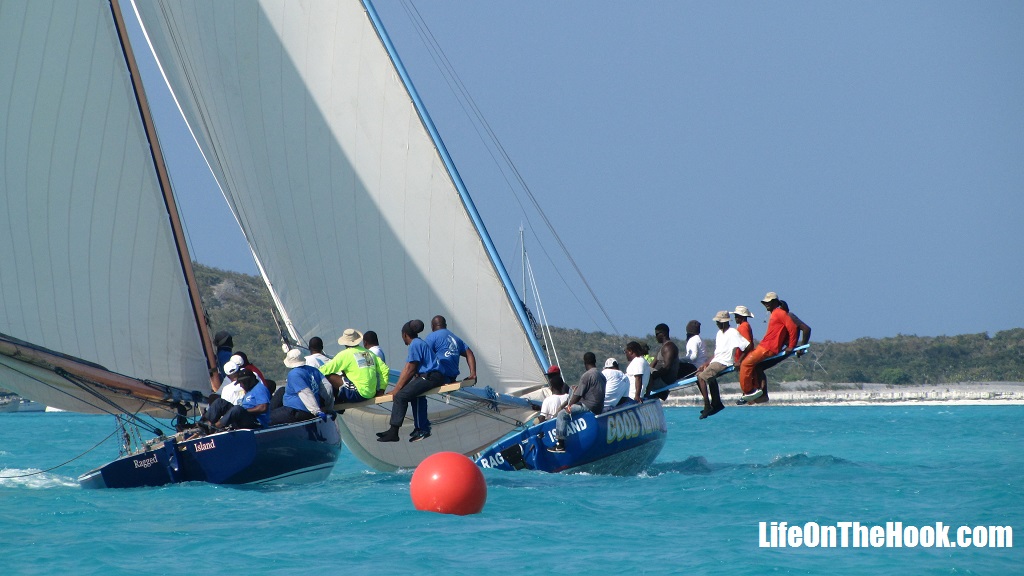 And what fine boats they race. We’re not talking about fiberglass, factory built one-design boats here, we’re talking traditional Bahamian sloops. Constructed by hand of madeira (Spanish cedar) and mahogany, the boats are beautiful works of craftsmanship. Sporting canvas sails and rigged with simple blocks and tackle (not a winch in sight), the vessels carry absurd amounts of sail for their size. On many, the booms are easily twice the length of the boat. And they are so lightly ballasted that the crew has to scamper up planks suspended over the side to keep the boats from capsizing.

Boats compete in one of five categories, from the tiny one-man E class dinghies 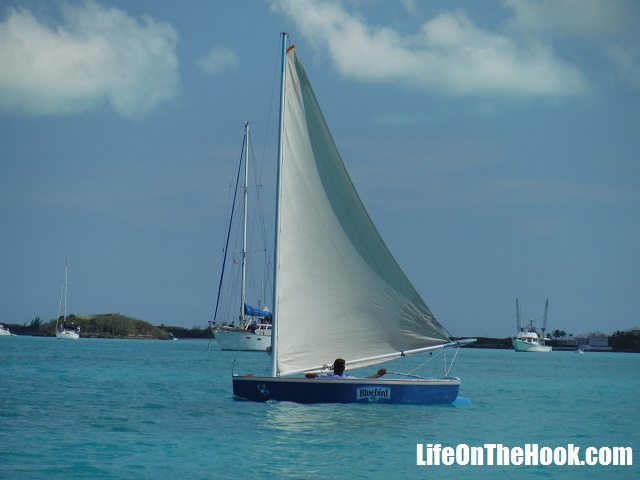 to the largest A class sloops carrying crews of over a dozen. 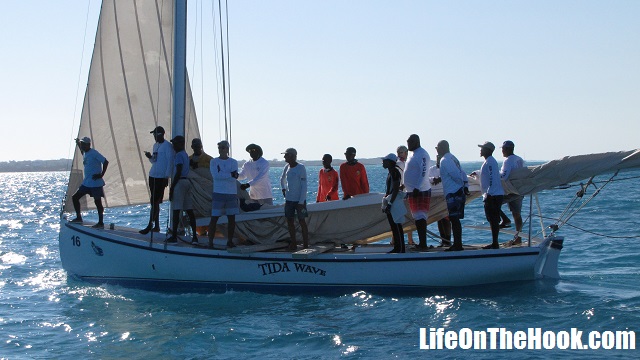 We watched in the days leading up to the races as the boats began arriving on the inter-island freighters. 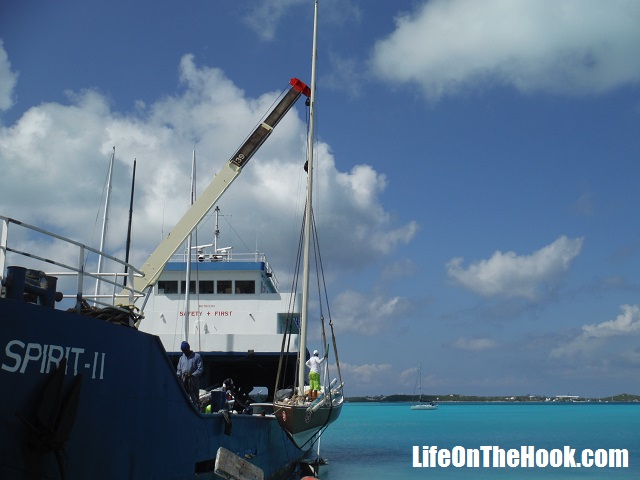 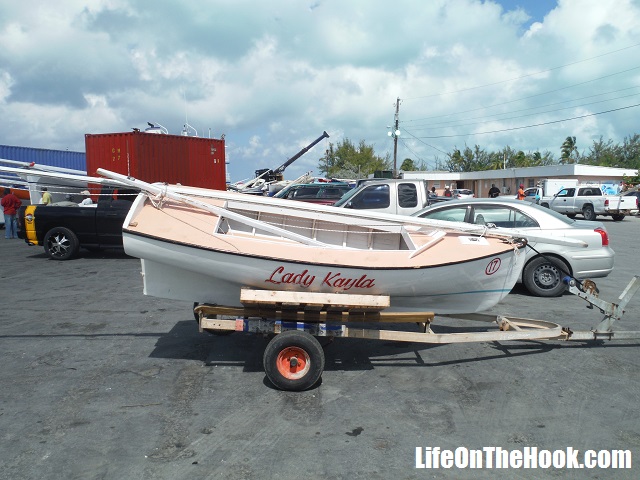 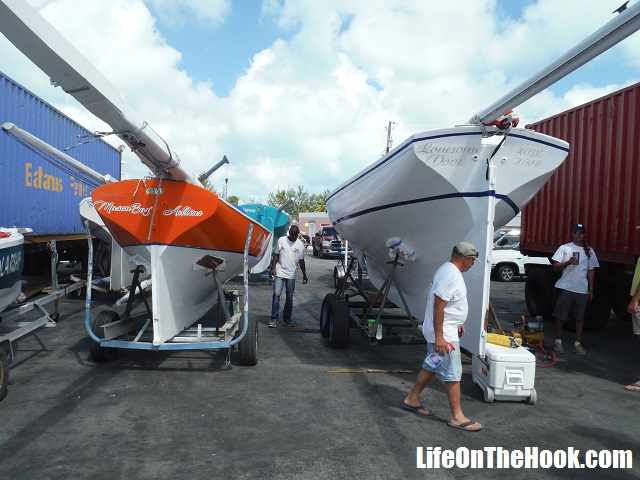 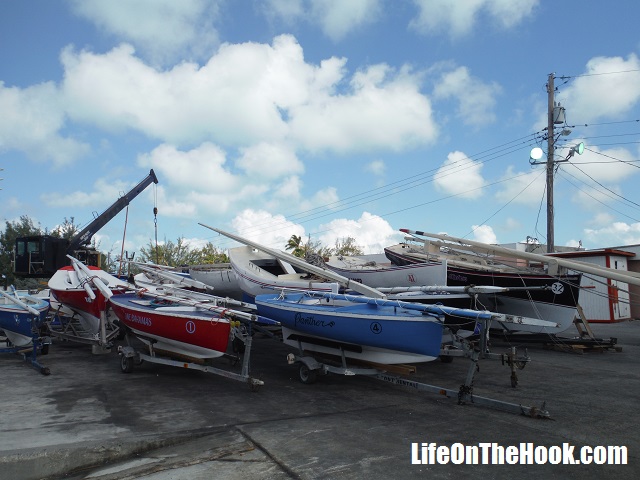 As probably the largest sporting event in the islands, the Regatta also includes a host of shore side events and activities. A virtual village of plywood structures are built around the waterfront to sell beer, liquor, and a variety of Bahamian foods. We’d call them booths, but the Bahamians proudly refer to them as shacks. 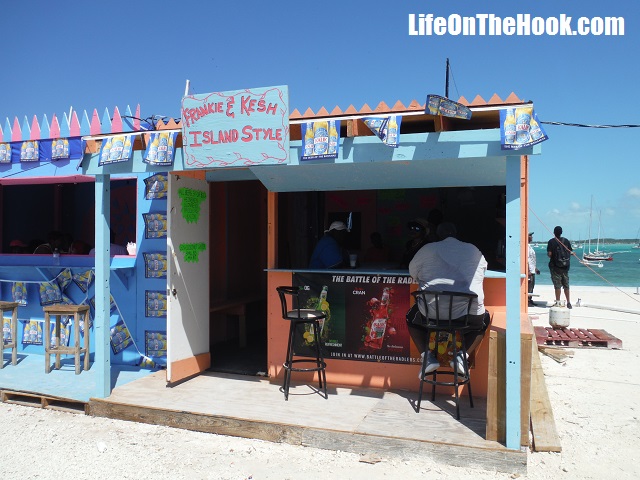 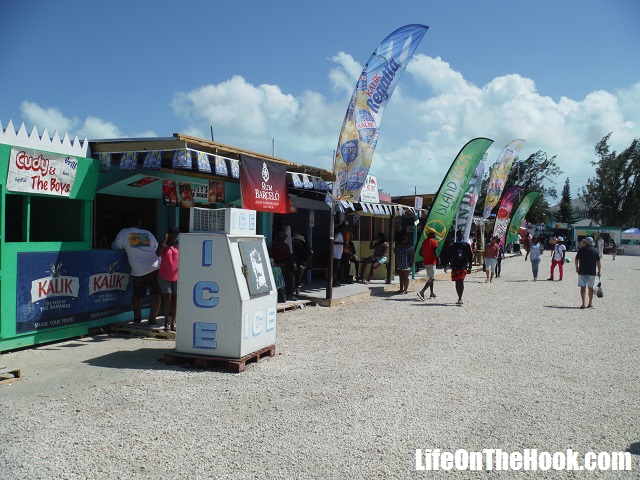 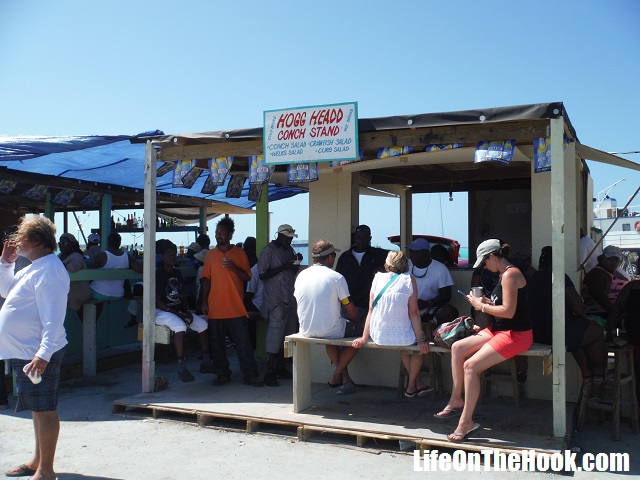 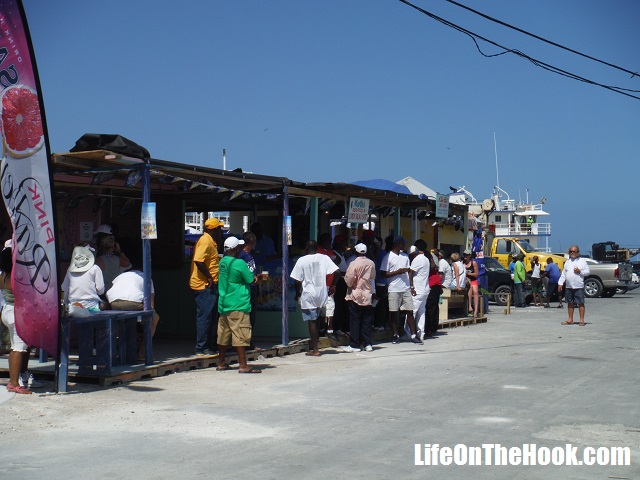 And of course there was a parade, Bahamian style.

And then finally, it was time for the races. With racing spread over four days, the smaller boats go first each day. Up to 30 C, D and E class boats would come to the line for each day’s start, filling the bay with sails. 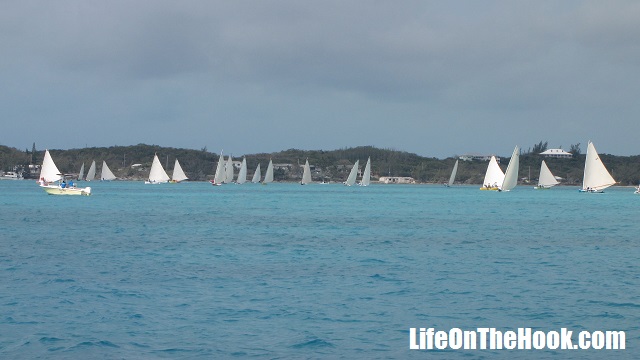 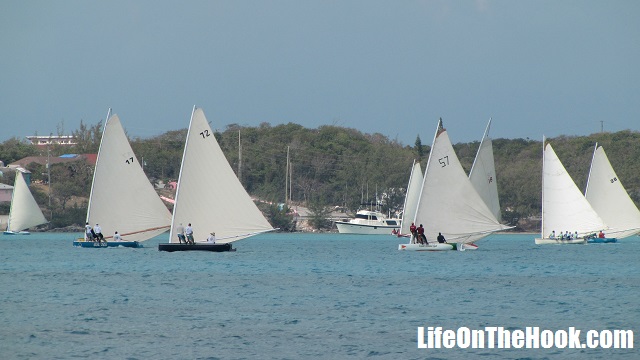 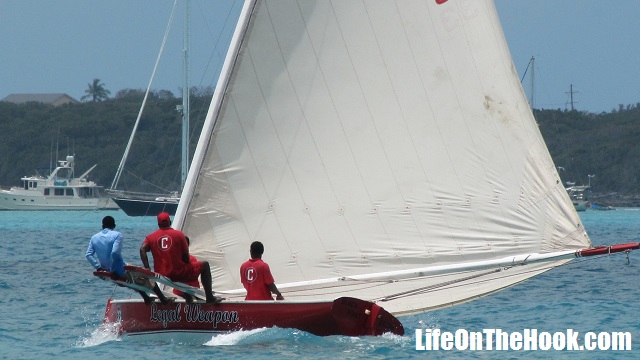 Next up would be the B class sloops with a crew of four to six. Typically a dozen boats would race in that class. And the final race each day would feature the thoroughbreds of the regatta, the big class A sloops representing various islands throughout the Bahamas. Six boats competed in this class, most trailed by a separate support boat.

We watched most of the races from onboard Eagle Too, and the course actually passed through part of the anchorage. But for the Class A’s, we wanted to be in the middle of the action, so we rode over to the starting line in our dinghy to watch from up close. 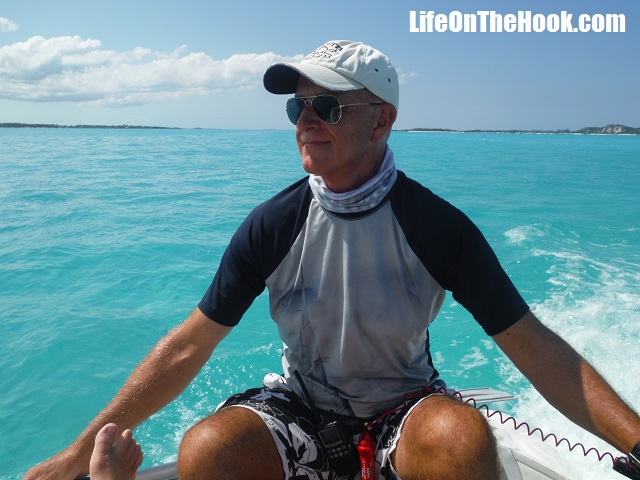 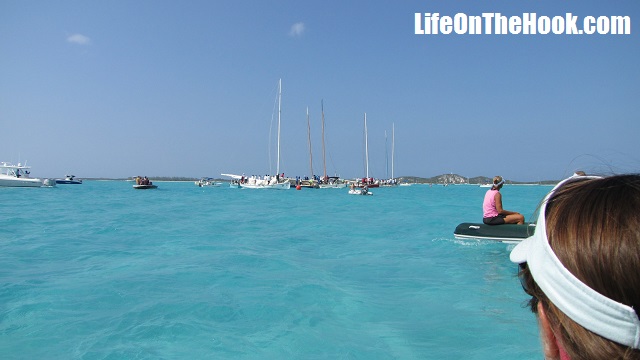 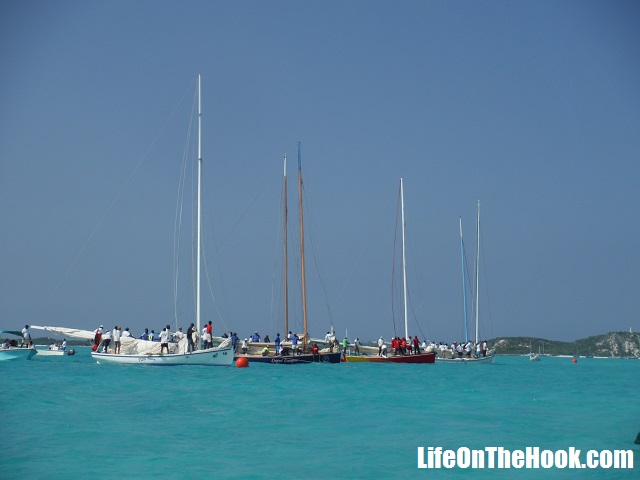 Now maybe there are other races that begin this way, but it was new experience for us. Each boat anchors at the starting line with sails down. When the gun goes off, the bowman begins hauling in the anchor, physically pulling the boat across the starting line, while the crew scrambles to raise the sails. The crew that can manage the intricate dance best gets away the fastest. Here, watch:

From the mad frenzy and jockeying for position at the start… 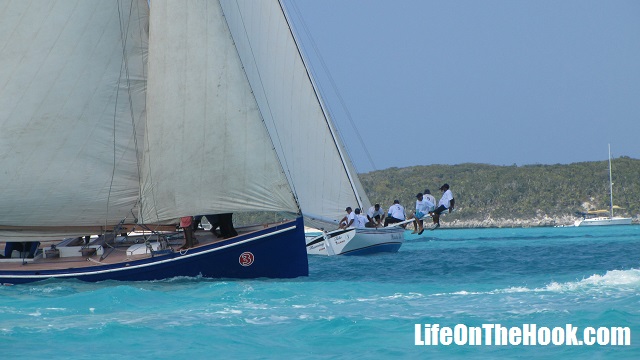 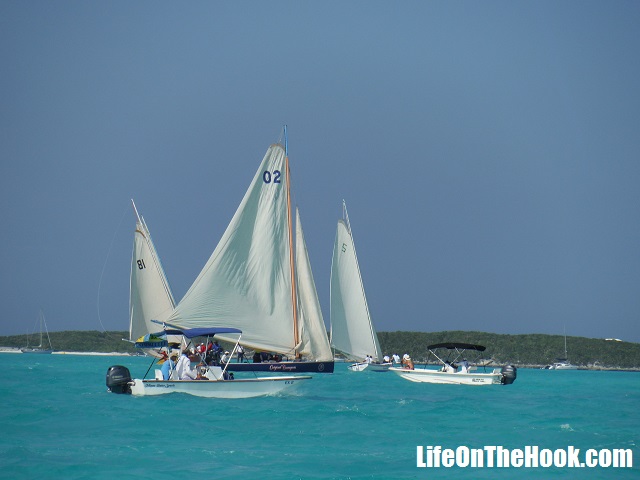 To the controlled chaos of rounding the upwind mark, with crews scrambling to trim sails and man their planks… 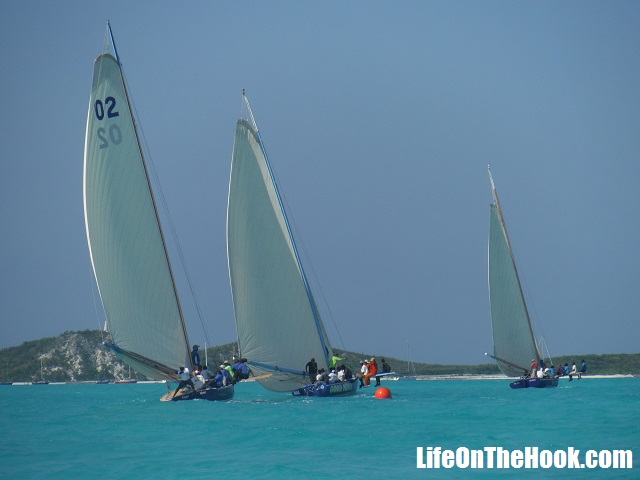 to the majestic parade of the downwind legs… 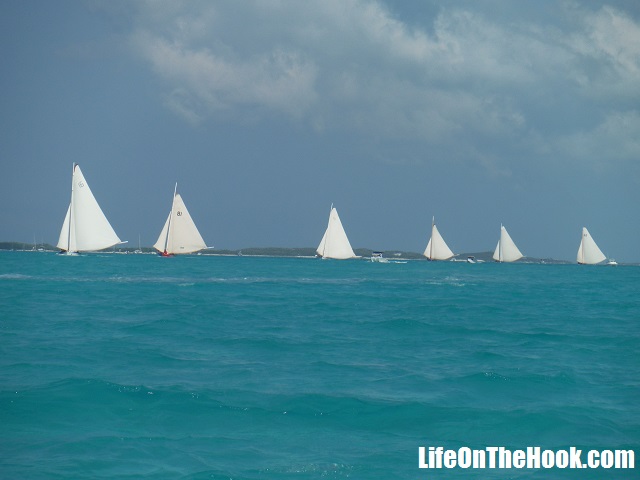 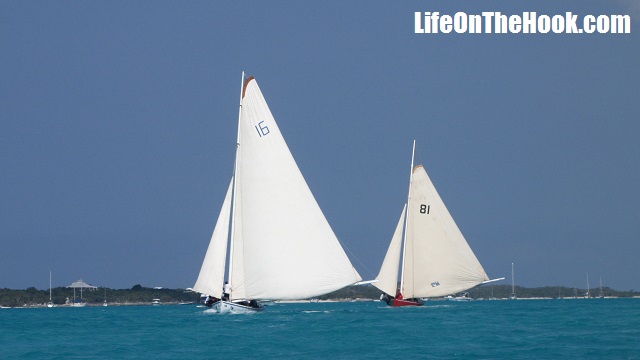 it was some of the best racing I believe we’ve ever seen. After four days of intense competition, we were sorry to see it end. I’m definitely glad we made it to this year’s event. Maybe we’ll have to come again next year!

One thought on “The Family Island Regatta, The Reason We’re Here In George Town”