We first heard about Emerald Bay Marina (or The Marina at Emerald Bay as they like to call themselves on the VHF) from another cruising couple we met in Nassau. During our travels we often learn of places that weren’t originally on our radar from talking to other boaters. I’d go so far as to say that probably half the places we’ve made a point to visit were places we’d never even heard of when we set out for the Bahamas last December.

When another couple we were having sundowners with several weeks later, this time at Allen’s Cay in the northern Exumas, also mentioned Emerald Bay, it cemented the notion that maybe this was a place we should visit. And when weather delays kept pushing back our arrival in George Town, and we found ourselves staring April 15th in the face and needed to find some reliable internet to do our taxes, the Marina at Emerald Bay sounded like a very good option since we were in the area. 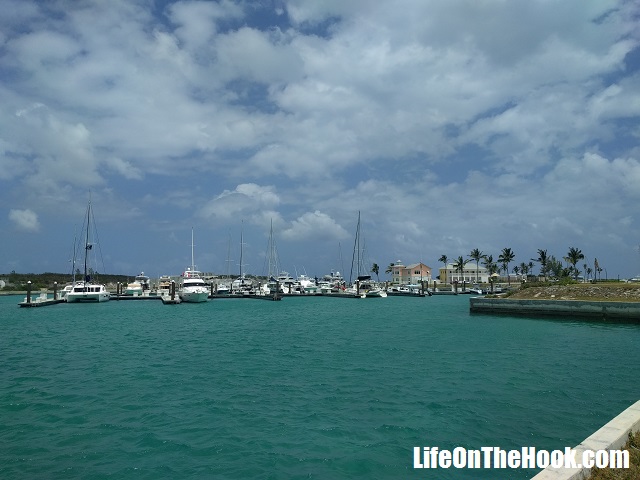 So we pulled in for a few days. To do our taxes. And catch up on laundry. And grab some provisions and restock our liquor cabinet. And then the weather closed in.

We’ve been here now for two weeks, listening to the wind blow. A steady 15 to 25 knots from the northeast, with gusts on some days into the 30’s. But before you tell us to suck it up and not let a little wind scare us, I should point out that the marina entrance faces northeast, and runs close to a shallow reef. When the wind blows strongly from anywhere north of east, large breaking waves sweep the inlet. 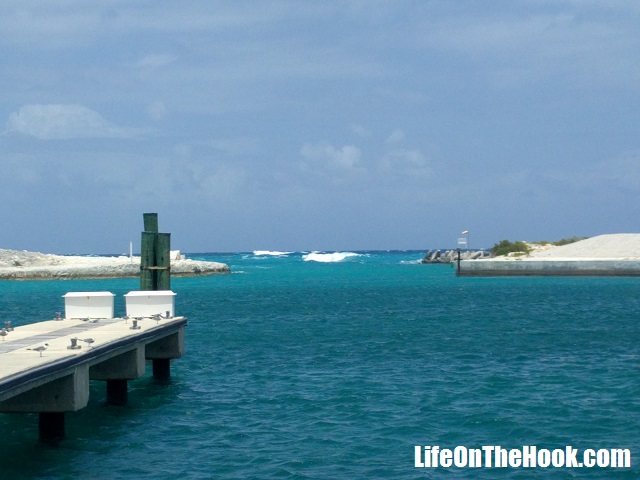 We watched boats try to leave. And the breakers stopped them dead like they hit a wall, and then tossed them around like a cork in a tempest. There just wasn’t anyplace we needed to be that merited chancing an exit through those waves. As I said to another boater who thought he could impress or inspire us with tales about worse conditions he’d endured in the past, we had no reason to deliberately put ourselves in a situation where one little engine hiccup could cause us to lose the boat.

There’s pretty good, free WiFi, and a strong cell signal. The shower room is among the best we’ve seen in our travels, with individual rooms each containing a sink, toilet and enclosed shower, all cleaned daily. Modern floating docks in very good condition. The laundry facility? Several washers and dryers, all late model front loaders, and they’re totally free! Yes, free. A free DVD lending library with several hundred movies. A pleasant, professional staff. And probably the nicest clubhouse we’ve ever seen. Even nicer than any yacht club we’ve visited. 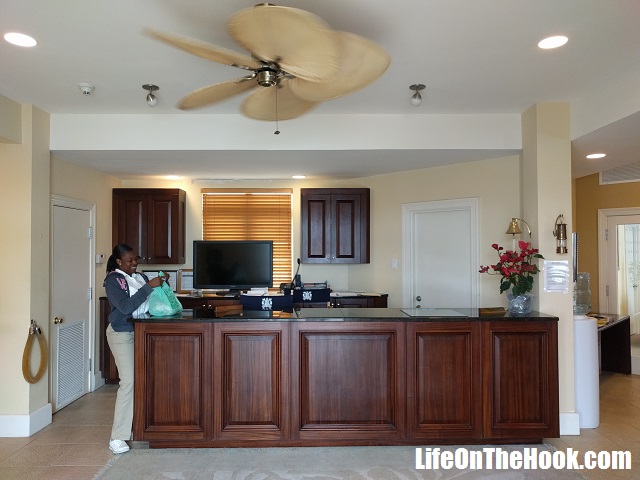 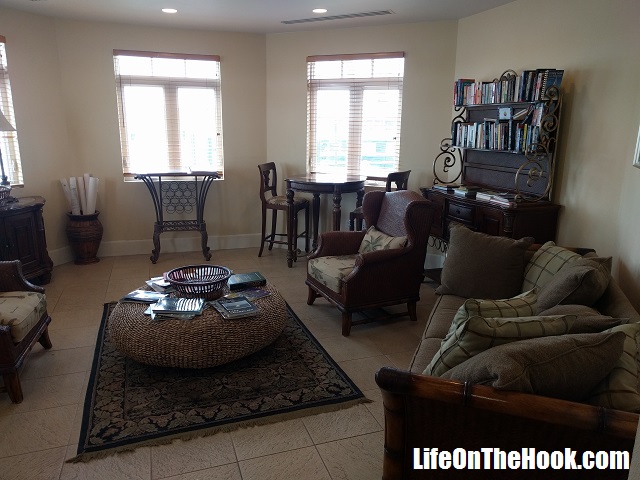 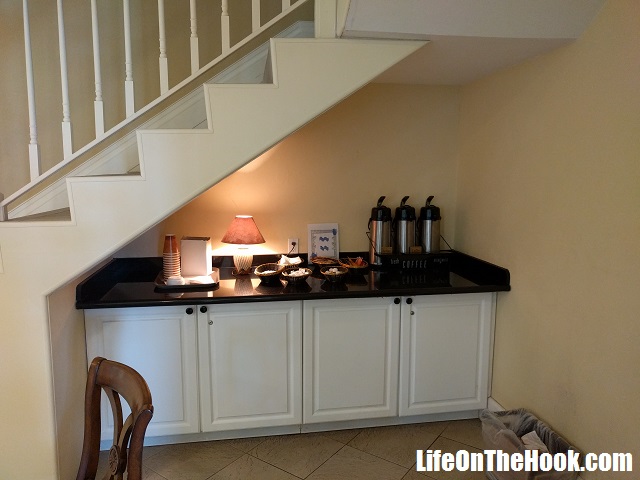 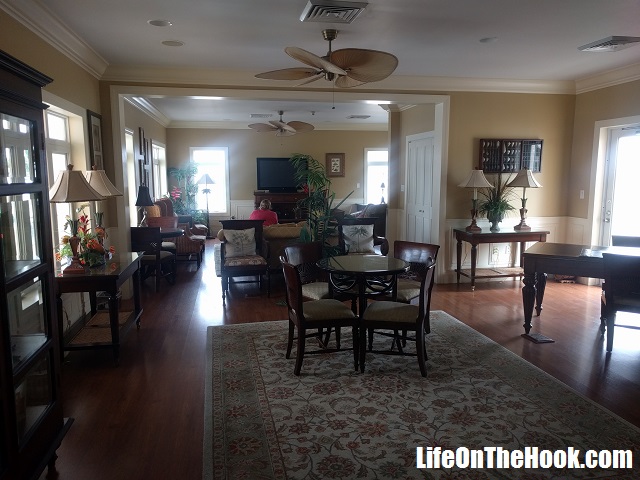 More of the boater’s lounge. 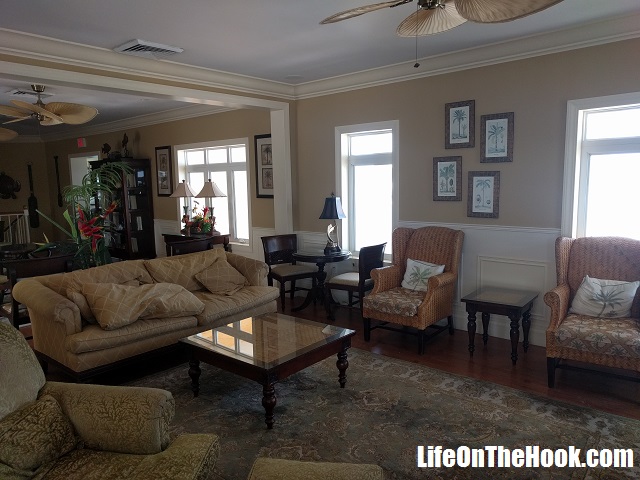 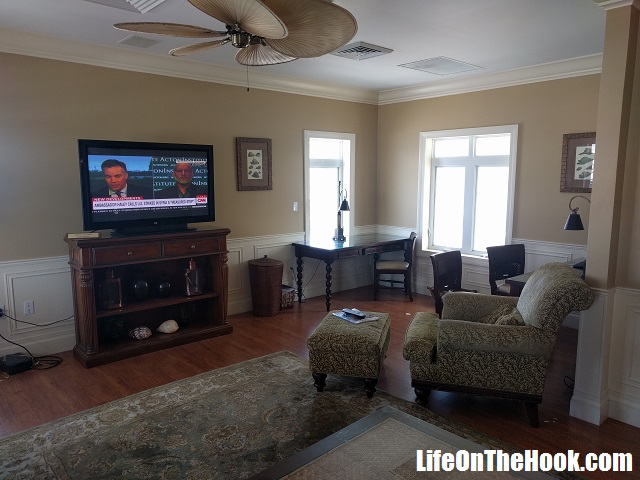 Even a complimentary internet-connected computer for those who don’t have their own laptop. 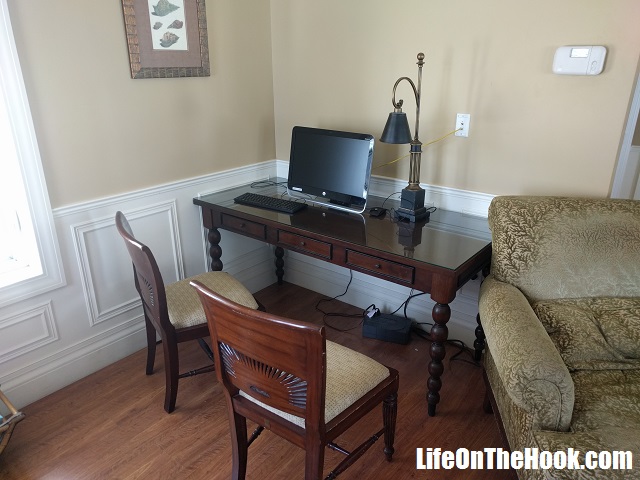 We forgot to take a picture of the fitness center and weight room, but we did grab a shot of the billiards table. 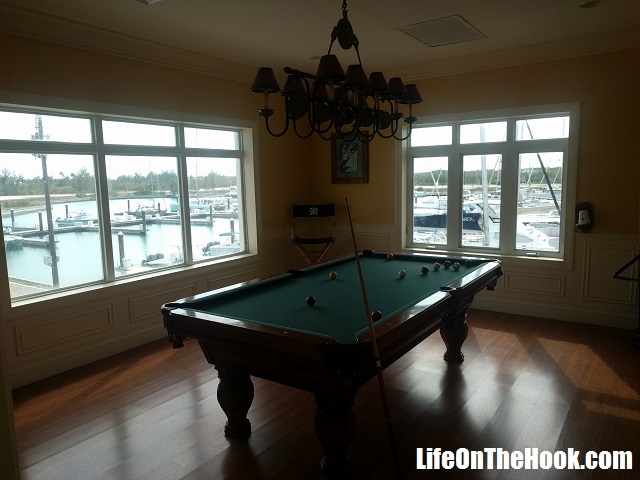 Now none of this would surprise many of you if I told you that we were paying $5, $4, even $3 a foot to stay here. But get this. Our charge to stay at The Marina at Emerald Bay has been 50 cents a foot. That’s right. Half a buck per foot per night. So for our 37 foot boat, we have the free laundry, free WiFi, free DVD library, showers and coffee bar and lounge and computers for less than $20 a day.

But wait, there’s more! It’s called Happier Hour, and it takes place every Monday at 5:30. You see, The Marina at Emerald Bay is owned by Sandals Resort, and to make us feel part of the family, they throw a free weekly party for the marina guests. 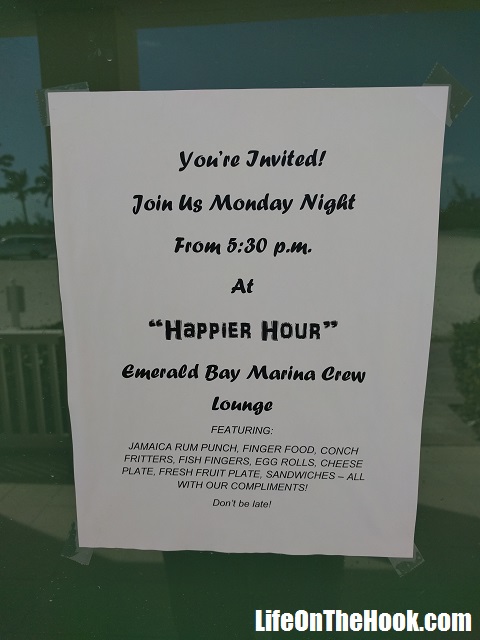 Just be sure to be on time, because the rum punch and food goes fast once the bell rings! 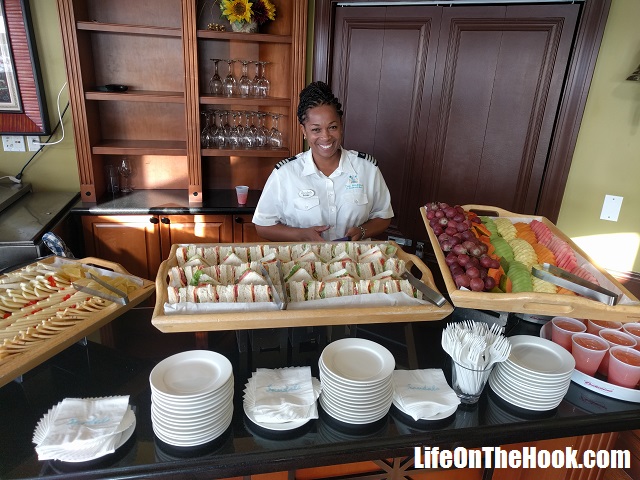 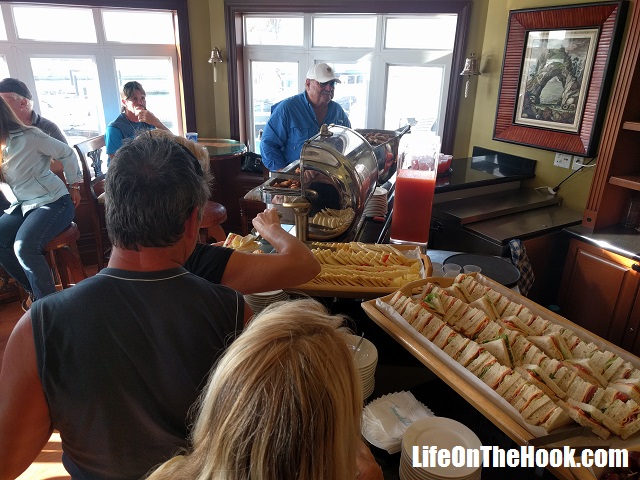 Not enough for you? Well, there’s a Greg Norman designed 18 hole course right next door that wraps along the shore like Pebble Beach, and of course, the Sandals Resort that I mentioned in our previous post is just a few minute’s walk down the beach. They’re not free, of course, but with all the money you can save by staying at the marina, well, maybe you can afford to splurge a little!

What’s the catch, you ask? Well, there are two. First, in order to secure the 50 cents per night rate, you have to stay a minimum of three nights (but honestly, why would you want to leave after just one or two nights?). The second is that the bargain rate dockage comes with no services. That’s no water, no power, no pumpout. Just a space at a dock to tie up your boat. But since we make our own water and power, and the temperatures are still cool enough to be comfortable without air conditioning, this hasn’t been a problem for us. But if you absolutely need power and water for air conditioning and the ice maker, well, the rate is $2.75 a foot a day, plus metered utilities.

But honestly, who would have believed you could find such value here in the Bahamas, land of the $18 hamburger and $45 case of beer?

2 thoughts on “Happier Hour And The Very Good Deal”