We originally planned to stay here at Palm Cay Marina for three or four days in order to make a grocery run and catch up on our laundry. But then we looked at the weather. The forecast called for wind. Lots and lots of wind. Gale force wind. The kind of wind that makes sitting at anchor damned unpleasant.  So we decided that we’d much rather wait it out here in this snug little harbor tied firmly to a pier. And like that, our three to four day visit is now entering its second week. And there are at least two, possibly three more days of this wind yet to come.

While we may be sailors, we’re the leisurely cruising sort. There’s nothing about heading out under a gale warning that we find appealing. Since I often tell people that we have no place in particular to be and all the time in the world to get there, we feel no urgency to get moving until the conditions are right. Besides, this is a pretty nice place. There’s a bar, a restaurant, a beach and a pool. The washers work in the laundry room. They even have a little Toyota that you can check out for two hours at a time to run errands. We’ve used the time to do some shopping and a little sightseeing, and we’re taking advantage of the pretty decent marina internet to catch up on our banking and start our taxes and do some software updates on all our various devices. We’ve even been able to catch up on a few of the TV shows we’ve missed since leaving Florida by streaming episodes (which is not as easy as it sounds, but I’ll have more on that another day).

But still, our marina fee of $80 a day really starts to add up after a while. It’s putting quite a dent in our cruising budget. So hopefully in the next few days this wind will blow itself out and we’ll be on our way. From here, we’re jumping over to the Exumas to start working our way south towards George Town.

But for now, let’s take advantage of the fast WiFi to catch up on pictures!

We’ll start with this taste of what it’s like to wake up after a night spent anchored in the middle of the Great Bahamas Banks. No land in sight, but only 18 feet deep!

On the second day of our trip from Bimini to Nassau, we tucked into what we thought was a nice little anchorage between Chub Cay and DIamond Cay. Chub Cay has been a major mecca for sport fishermen that want to hunt for the big ones in the deep waters of the Tongue of the Ocean. Unfortunately for them, it was clobbered by hurricane Matthew last year, and is only now starting to get back on its feet. And the nice little anchorage turned out to be a mirage. When I dove on the anchor to check its set, I learned that the nice big patch of white sand that we’d settled over was actually a flat table of white limestone, and the anchor was just sitting on top of it. Fortunately, extremely light winds were forecast overnight, so we just put out a hundred feet of chain and called it a night. Besides, there was an unlocked WiFi network available that let us check weather and update Facebook. 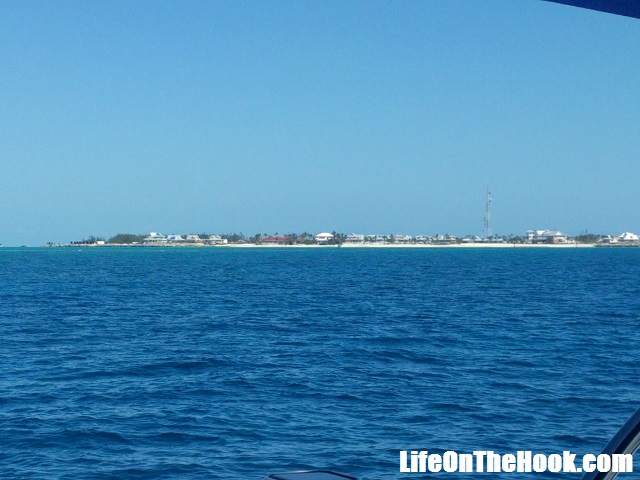 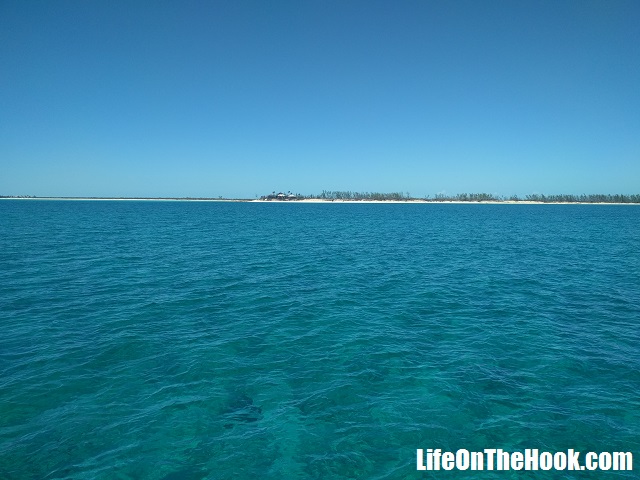 The next morning we rose with the sun and pointed Eagle Too towards Nassau. The day started dead calm. 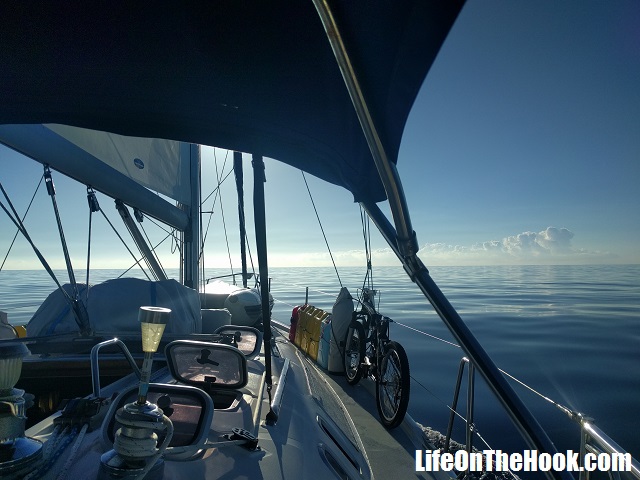 We tried to motor-sail, but there just wasn’t any wind to be had and we eventually gave up. When it did finally start to blow, it was dead on the nose, and since we needed to be at Palm Cay Marina before they closed the gate in the evening, we continued motoring. Rhonda put out a couple of fishing lines, but only managed to add to her collection of seaweed. 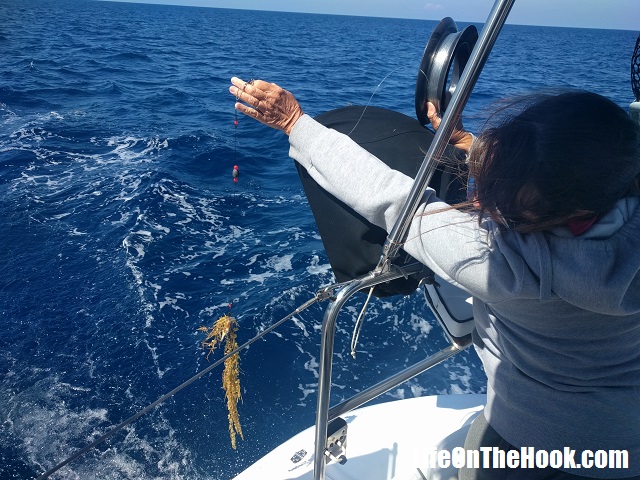 By mid-afternoon, we passed Atlantis on Paradise Island, which anyone who’s been to Nassau will recognize. 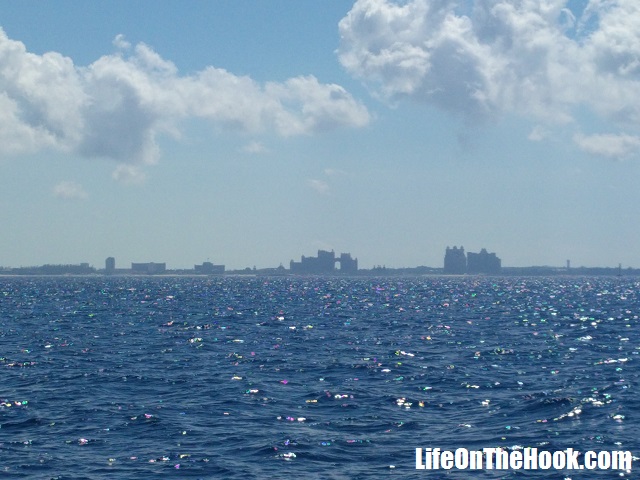 Dodging the cruise ship and mega-yacht traffic, we hooked around the eastern end of New Providence Island to reach Palm Cay Marina, our destination, where we quickly settled in and made ourselves at home. 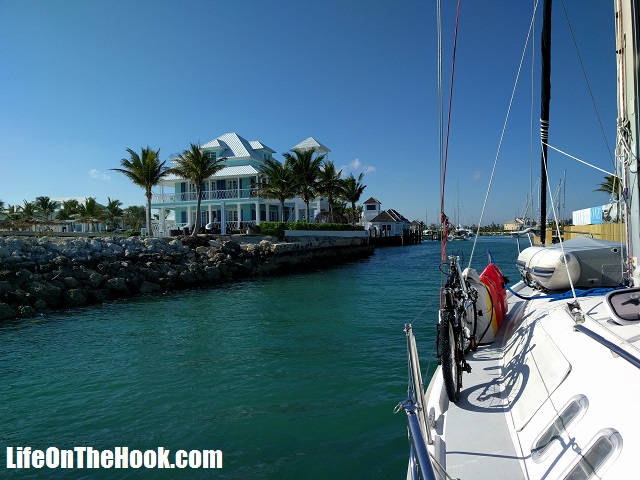 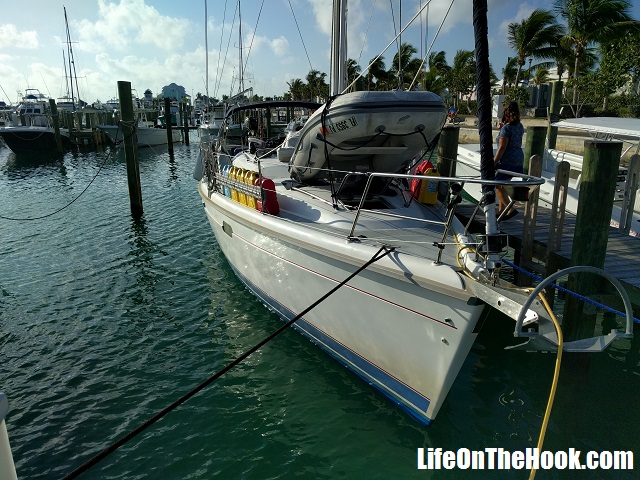 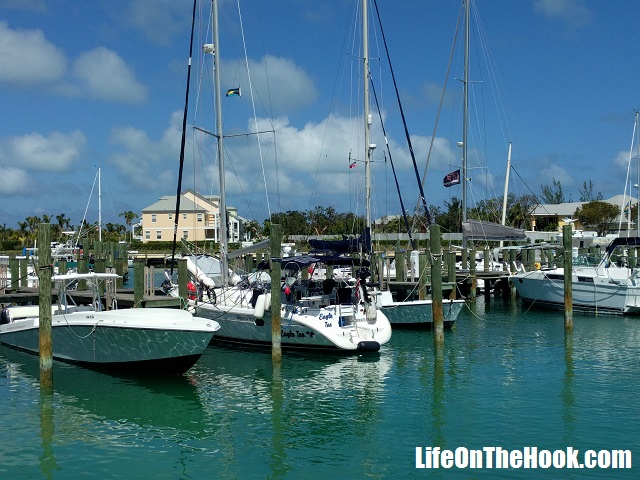 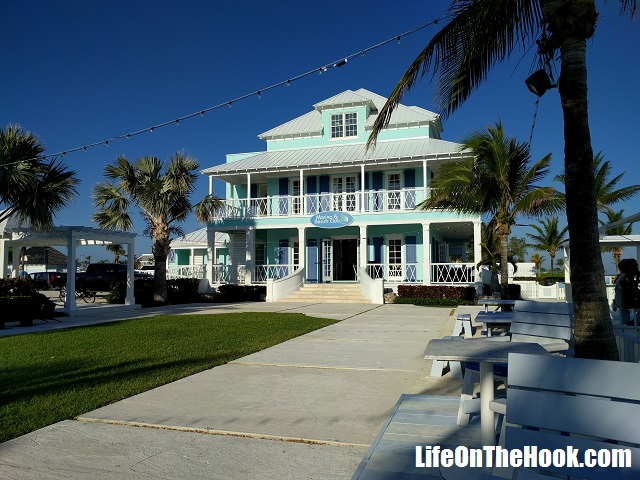 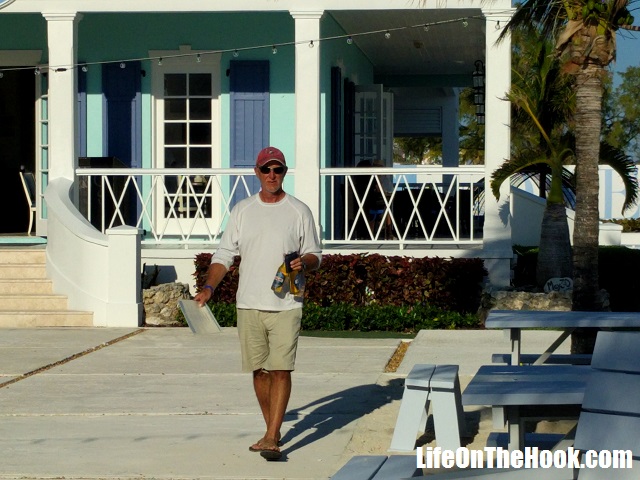 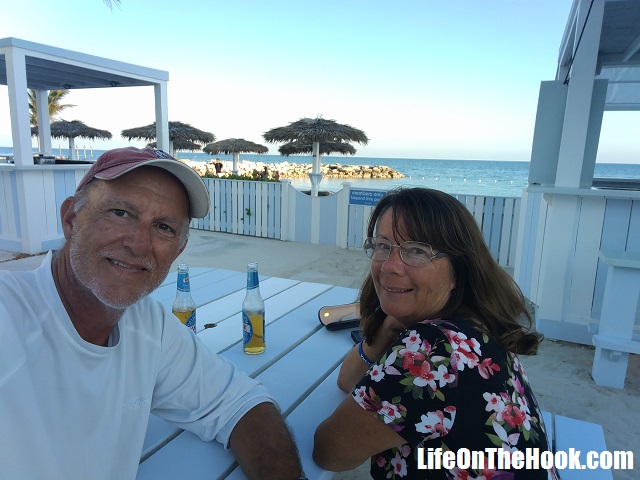 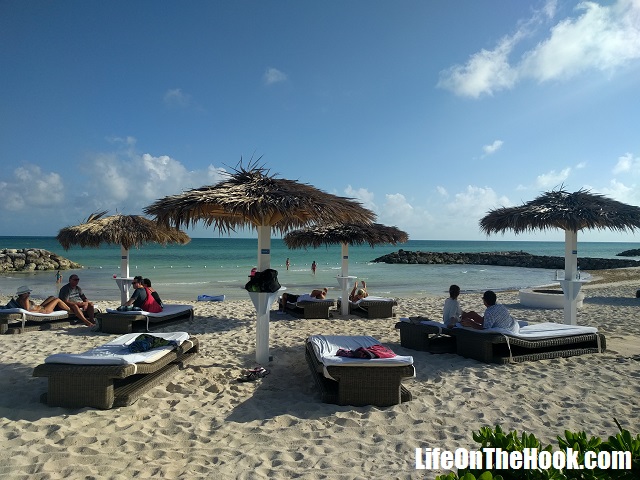 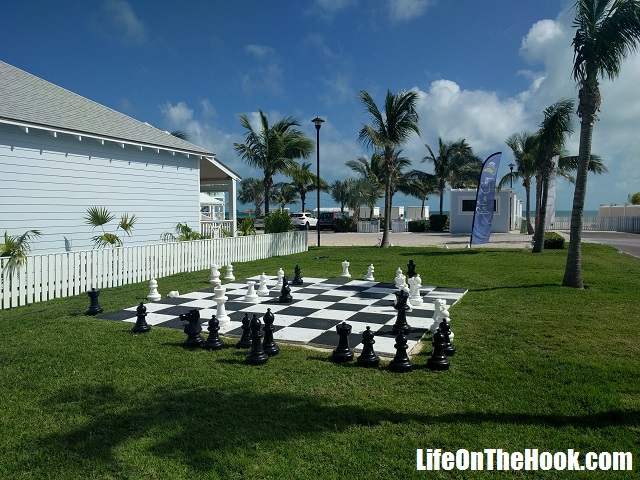 Among cruisers, Nassau is considered a bit of an armpit. The main harbor is crowded and dirty, and crime is rampant. Even marinas with security have had problems with thieves approaching at night from the water on paddle boards to burglarize yachts. Palm Cay Marina is several miles from Nassau, and has security both from the land side, and from the water as well. To enter from land, you have to get past this guy. 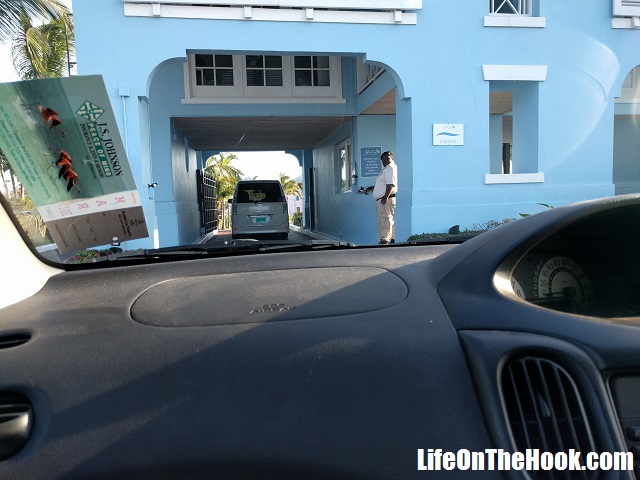 And believe it or not, they pull up a chain barrier to lock the waterway into the marina at dusk. 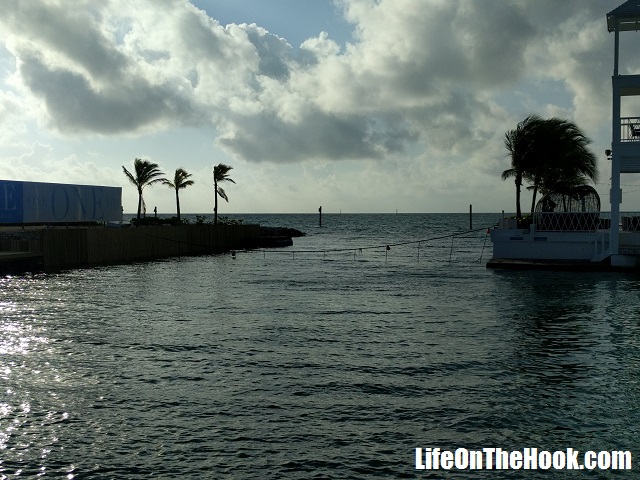 It’s a shame it has to be this way, but it is what it is, and as the Capitol of the Bahamas, Nassau is the best place to run parts, obtain stores, fill prescriptions, or send and receive any type of mail. So we picked a place where the security is tight enough that many people don’t even lock their boats. And did I mention the free loaner car?

OK, it’s not really much of a car. And the steering wheel is in the wrong place. But the streets get a bit narrow and they drive on the wrong side of the road here, so it works. With Rhonda helping remind me to keep left (especially at traffic circles), we made it into town and back without incident. My biggest problem was my tendency to turn on the windshield wipers whenever I wanted to signal a turn, because the control stalks were reversed on the steering column. 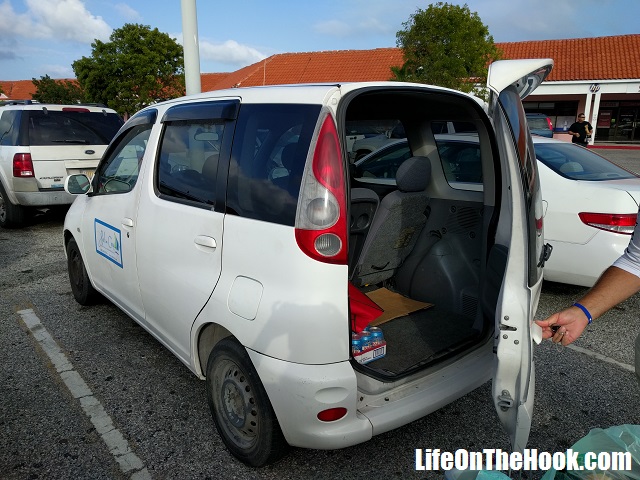 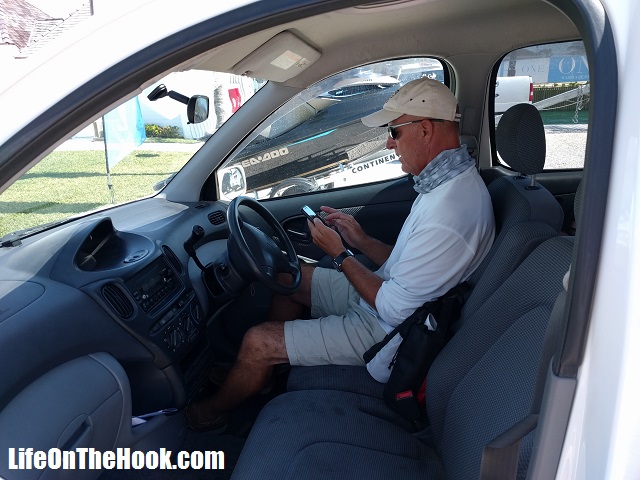 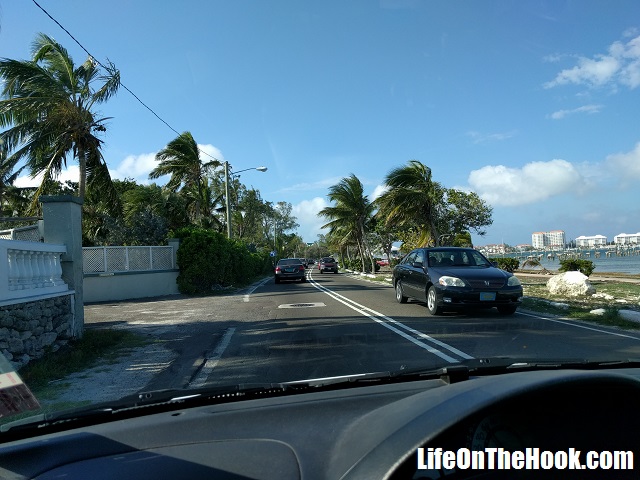 If you’re weeks out from seeing a major grocery store, we discovered you’ll find everything you need at Solomons. And the prices weren’t even that bad. Some things were a bit higher than we expected, but the meat and vegetable prices really weren’t much more than we were used to paying at home. And the selection was terrific. And we could even buy beer by the case! In Bimini, we had to purchase by the can or bottle, as the stores didn’t want to give a case price, but rather protect their margins by charging by the can. 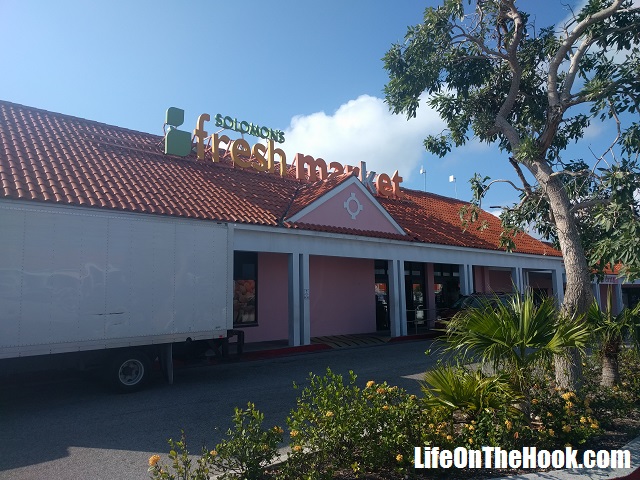 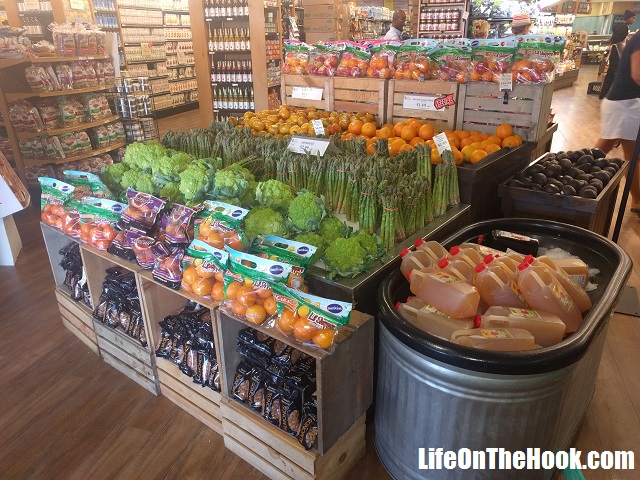 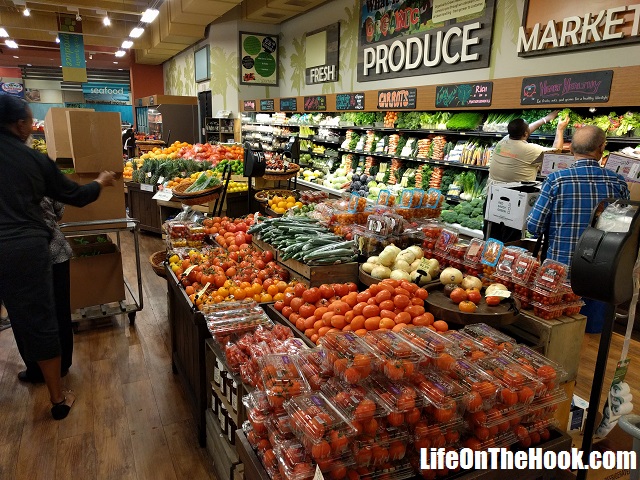 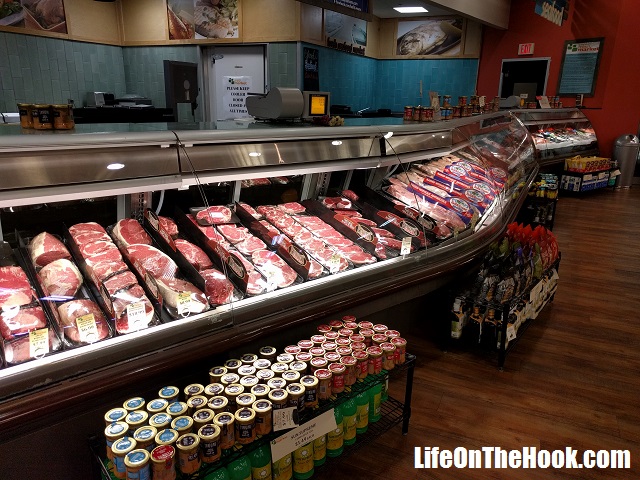 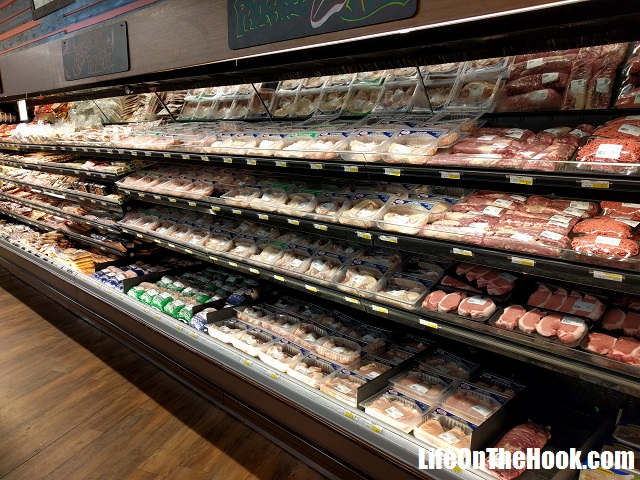 So if ever there’s a reason to deal with all that is Nassau, the opportunity to re-provision at a well stocked grocery store is right up there.

Our groceries stacked on the pier waiting to be brought on board. 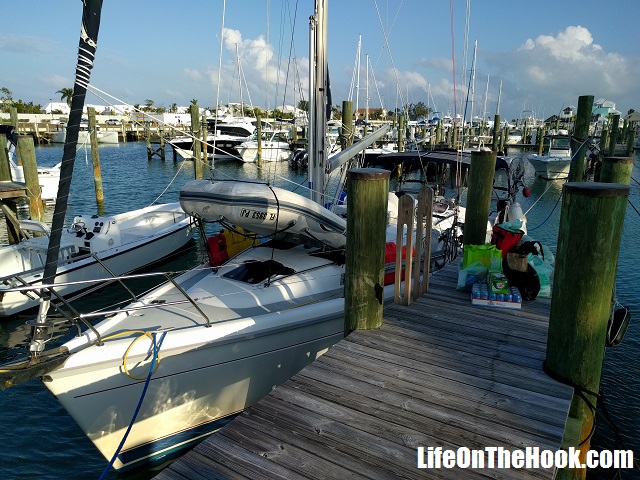 In our next post, we’ll go a little bit rogue in order to use the loaner car, which is really for running short errands, to do some sightseeing.