During our shakedown cruise, we made three international passages on Eagle Too. The first was from the Florida Keys to Cuba. The next was from Cuba’s western tip to Mexico. And the final one was from Mexico back to the Keys. On each of these passages, we had to cross major shipping lanes, where we crossed paths with everything from cruise ships to oil tankers. Naturally, each time was deep in the darkest part of the night.

Imagine trying to slowly thread your way on foot across a busy interstate highway in the dead of night. That’s a pretty accurate analogy for what we encountered. It was pitch black, but we were surrounded by lights. Lots and lots of lights. Were they coming toward us? Moving away from us? Were we in danger of being run over? We really couldn’t be sure. Large commercial ships aren’t lit like the recreational craft we’re used to dealing with. There usually aren’t discernable running lights and a white stern light to help you figure out their direction. Sometimes a single vessel will display a dozen or more lights of every conceivable color. Our boat was pitching, waves were often obscuring the lights from other vessels, and on top of everything else, we’d be tired from being up all night.

In times like those, we were so very glad that we had digital HD radar and an Automatic Identification System (AIS) transceiver onboard. With our radar, we could reach out dozens of miles and track the movement of the surrounding traffic. And with our AIS transceiver constantly broadcasting, we could not only see who was out there, we could be reasonably certain that they could see us as well. If fact, on those occasions where our AIS would tell us that we’d be crossing within a mile of another vessel, when I’d radio them on the VHF to confirm our crossing, they’d always reply, “We see you, Captain.” It was very comforting to know that even though we’re only a 37 foot plastic sailboat, we were showing up on their bridge display the same as a 600 foot freighter. And it was also pretty cool to hear a huge ship say, “We’re altering our course to port,” in reply to our “Do you see us?” radio call. Sometimes it’s good to be a sailboat with the right-of-way! 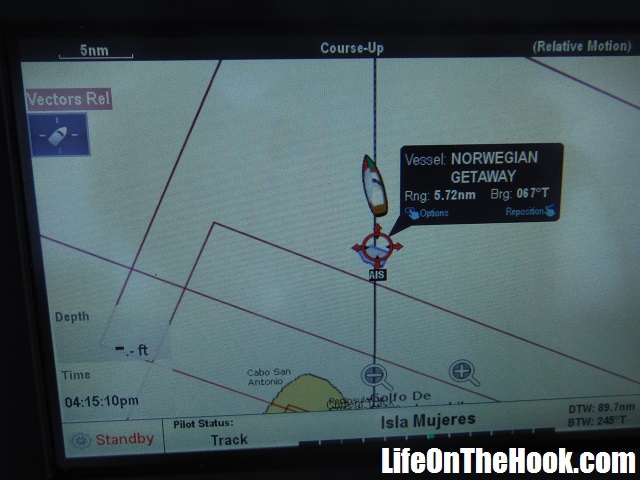 The radar also helped us plot our way around thunderstorms. We relied on it a lot while working our way back up the west coast of Florida during the peak of thunderstorm season. On the water, storms can be deceiving, appearing closer or further away than they actually are, especially at night. More than once in the dark of night our anxiety level would rise when we’d see a cloud near us suddenly start lighting up with continual bolts of lightning. But it would be reassuring to paint the storm with our radar and find out that it was 40 miles away and not moving toward us. 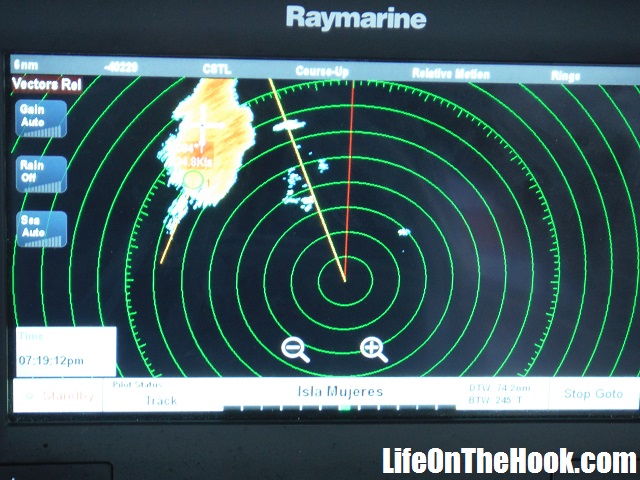 So number 2 on our list of things we’re glad we had onboard for our shakedown cruise were our radar and AIS systems. We love information that contributes to situational awareness, and these tools kept us very aware. Depending on your budget and relative tolerance for risk, we feel the very least you should have onboard for crossing major shipping lanes at night is a very good radar reflector and an AIS receiver. At least with those, you’ll increase your chances of showing up on another ship’s radar (if it’s being monitored, which is a big if), and you can see the AIS signals from commercial traffic. This won’t help you with storms, for that you’ll want radar. And we found that once we crossed the shipping lanes north of Cuba and entered Cuban coastal waters, none of the local fishing boats broadcast an AIS signal, which made the radar that much more important.