We have a metric we apply here on the good ship Eagle Too that we call the Suck-to-Fun ratio. It has an indeterminate scale and infinite limits, but it acts as a basic measure of whether or not we’re enjoying this cruising life at any given moment. When the level of Fun exceeds the amount of Suck, life is good and we’re comfortable with our decision to embrace this crazy and unconventional way of living. When the ratio is inverted, well, it can be a grim day onboard, and makes us wonder why we ever thought voyaging on a small boat was a good idea.

Stress is a major component of Suck. So anything that works to reduce Stress pushes the needle on the Are We Having Fun Yet meter toward the happy side of the scale.  We therefore gave a lot of thought to ways we could reduce stress when we were outfitting Eagle Too for our future travels.

Now we have it on good authority that dying of thirst is very stressful. We personally wouldn’t know, but it sounds reasonable, so we’ll go with that. Not being able to take a shower or properly bathe for days upon days? Stressful. Having to plan your travels and itinerary around sources of potable water because the tank level is always bumping empty? Stress city. What’s the common factor here? Water, and the access to and availability of same. So we felt that one piece of equipment we definitely wanted onboard was a watermaker.

So let me get to the point. When Rhonda and I started talking about the things that have made our time afloat better, safer, or more enjoyable, we both immediately concluded that one of the best decisions we made was the purchase of our Rainman portable desalinization system. It has been so liberating, so reassuring, and so UN-stressful to be able to make and use as much fresh water as we want, whenever and wherever we want. No measuring water usage by the ounce, no lugging water from shore in 5 gallon jerry jugs, no concerns about bad, dirty, or polluted water. Access to endless amounts of fresh clean water takes almost all the “rough” out of roughing it.

During our four month, 2,400 mile shakedown cruise, which included stops at some truly remote places, we never once lacked for water. We had take long showers, fill up the sink to wash the dishes, use it to flush the toilet and rinse off the deck, quantities of water. We’ve run our unit now for about 25 hours cumulatively, and have made about 800 gallons of tasty, pure water. In that time, we used about two to three gallons of gas for our Honda EU2000i generator to power the Rainman (about half the time we were plugged into shore power) and have changed the primary filter twice. I’m guessing it has cost us about $15 to $20 in total operating expenses.

The system has been so easy to set up and operate that even when we were in a marina and water was available from the pier, we still made our own. While in Cuba and Mexico, we encountered a lot of “yes, but…,” when we’d ask if the dock water was potable. There were people that drank it with no apparent ill effects, but bottled water for consumption was the norm.

When we purchased the system, we opted for the 32 gallon high-output version, and it was definitely the right decision. Our water tank holds 75 gallons, and it takes just a little over two hours to completely fill it. Some miserly water users could probably stretch that for weeks, but because we really don’t have to conserve, that’s enough to last us from four to six days. Then in a little over two hours, we’re full again. When talking watermakers with other boaters, our Rainman often gets covetous glances when we tell them how much water we can make. Usually they’ll be running a 4 to 6 gallon per hour DC powered system all day long trying to keep up with their usage. 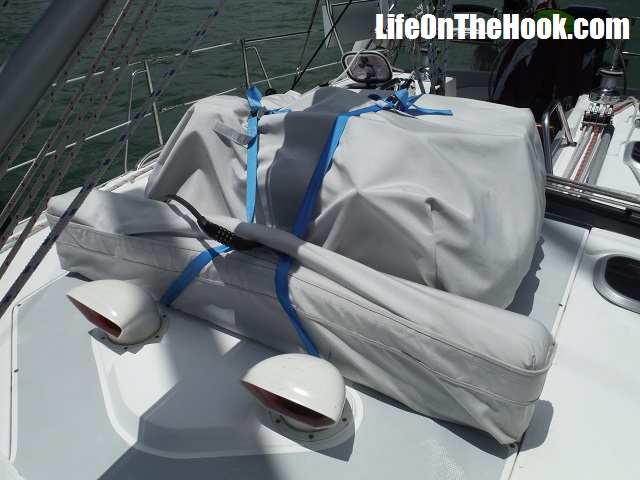 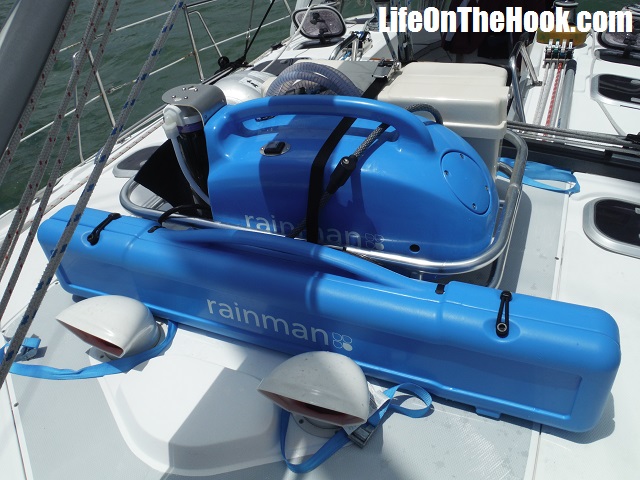 Covers removed. We secure the units with bicycle locks to keep them from walking off.

Our original plan had been to store the system in one of our cockpit lazarettes, but the space ended up being used for our expanded house battery bank. With storage room on our Hunter 376 at a premium, the only place left was in the on-deck storage cradle we had manufactured. At the time we had it built, we didn’t know what we would use it for, we just knew it would come in handy, and it turned a dead space under the mainsheet into usable storage. It’s been the perfect place for our Rainman system, and it only takes a few moments to uncoil the seawater suction line and drop it over the side, plug in the membrane unit, and start making water. The instructions for the system say that you should not store it in a wet location, and we also thought that the constant exposure to sunlight would degrade the plastic housings, so we had custom Sunbrella covers made to protect the pressure and membrane units from the elements. Short of a huge wave washing completely over the boat, we think we should be fine. They certainly still look like new after six months stored there. 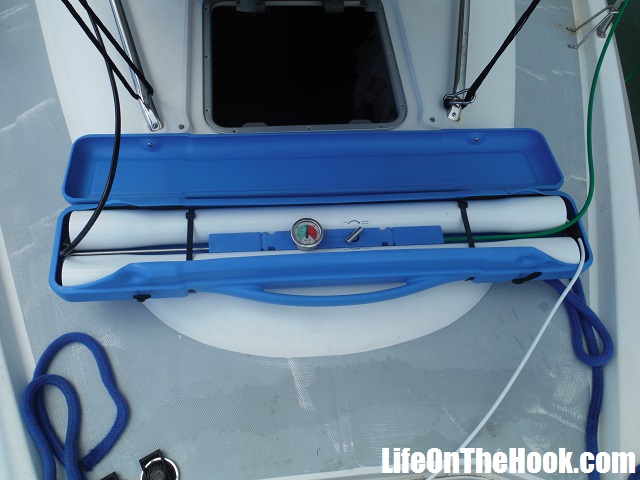 Setting up to make water 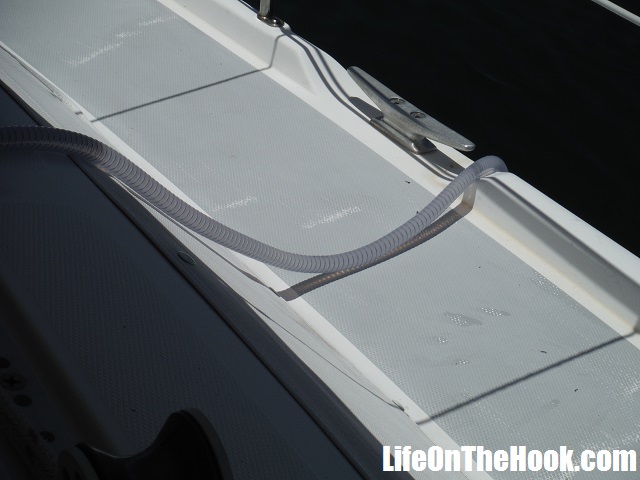 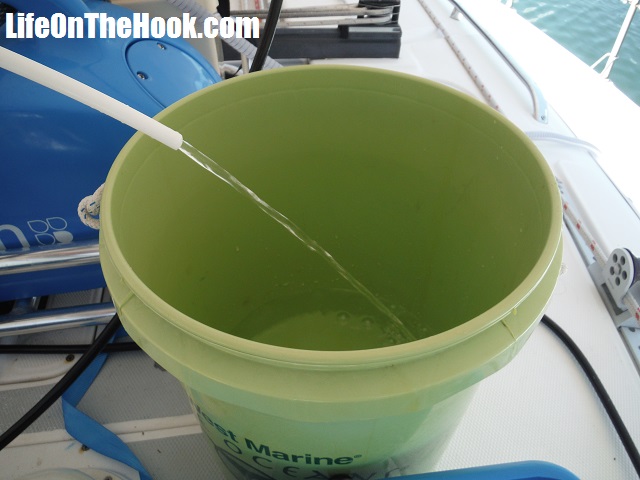 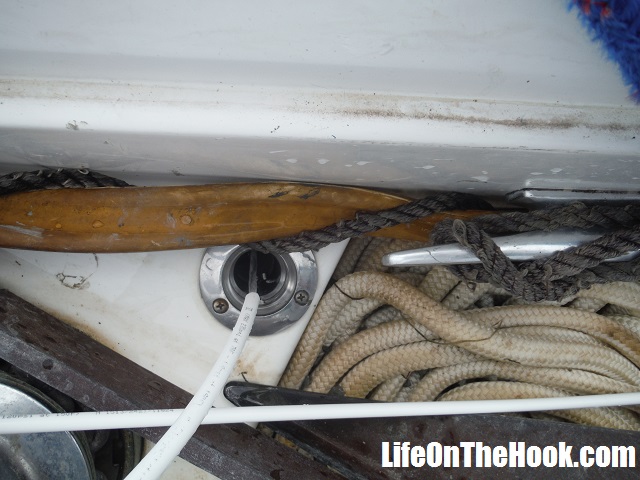 Was it expensive? At over $5,000 delivered, you’re darn right it was. But it’s been worth every penny, and we wouldn’t want to leave home without it.