As we’ve mentioned before, it wasn’t originally our intention to return to our hometown of Pensacola, Florida just four months after heading off on our grand adventure last April. But as things have turned out, it probably wasn’t such a bad thing after all. Four months of voyaging turned up some issues with Eagle Too that never made themselves apparent during the year and a half we lived at the dock. Issues that will need to be addressed before we head out again, and which will be much easier to deal with stateside than from somewhere down island. Besides, we had to go somewhere for hurricane season, and Pensacola isn’t a bad place to spend the summer on a boat. 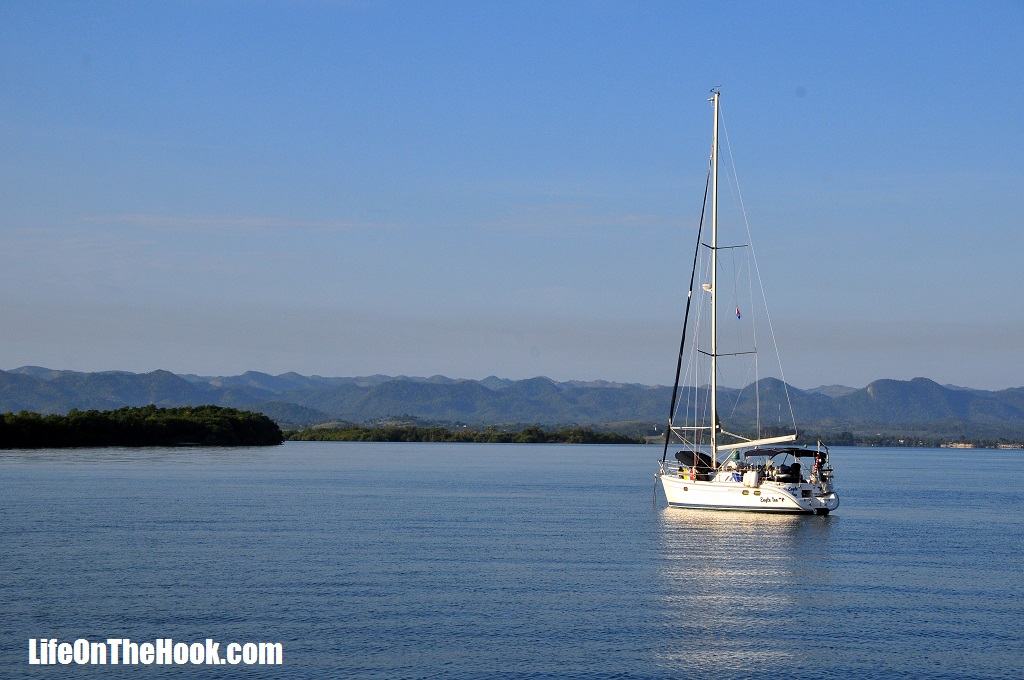 Our biggest concern, of course, is our ailing transmission. Even though it appears to be running smoothly and quietly and shifts well, the fact that it toasts the transmission fluid to a nasty dark gray color after 30 or 40 hours of operation tells us something is wrong. Fixing it is going to require pulling the transmission and sending it off to be rebuilt, and that means hauling the boat.

It’s been 28 months since our last bottom job, and our antifouling is showing its age, so if we are going to have to haul the boat to do the transmission work, we might as well put a fresh bottom on. No sense heading out with worn out bottom paint when we just happen to have friends here in Pensacola that run a marine maintenance and repair yard. 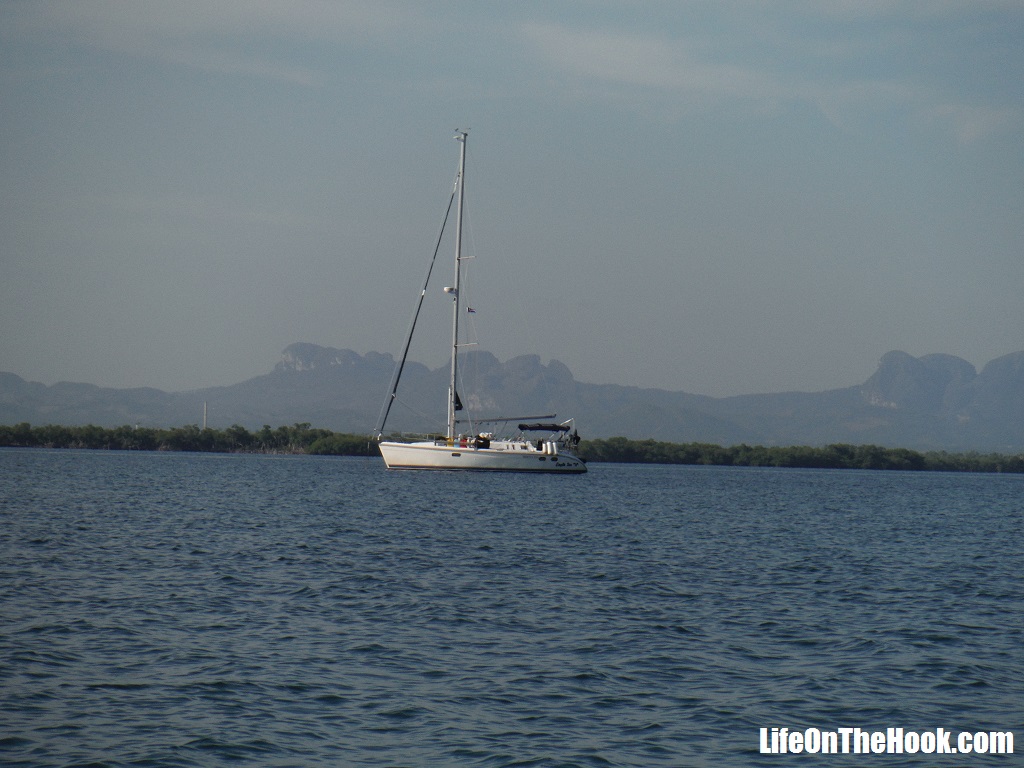 The windlass. That was a big deal. The fact that it stopped working at a really bad time (anchored too close to a lee shore with a rapidly approaching thunderstorm) drove home just how important to your health and safety a functional windlass is. Especially when your bower is a 65 pound brute like our Mantus. My back still aches thinking about pulling it up by hand in 25 knots of wind. But it’s all better now. Just some corroded crimp connectors under the deck switches.

Then there’s a short list of little things that we’re working our way through. For instance, we’ve mentioned before that instead of using expensive marine ventilation fans, we stocked up on cheap ($10) 12 volt automotive fans from Walmart to cool the boat at anchor. To power them, we installed 12 volt outlets all over the boat, wired to the Fan circuit on our breaker panel. Well, it turns out that the Fan circuit was only a 5 amp breaker, and if we tried to run three or more fans at once, the breaker would trip. I guess we never tried it before getting underway, since we usually had the air conditioning running. So we swapped out the 5 amp breaker for a 10 amp, since the wiring can handle the current. Problem solved!

We’ve prided ourselves on our bone dry bilge, so it really bothered us when we started accumulating a couple of inches of fresh water in the bilge from an unknown source. Some sleuthing determined that the level probe on our freshwater tank had developed a leak, allowing water to seep into the bilge whenever we topped off the tank. So out came the old one and in went a brand new probe from KUS (the company formerly known as WEMA).

Our cockpit speakers were falling apart due to UV exposure. So now we’re sporting a shiny new pair of West Marine stereo speakers. The backlight on our Raymarine depth gauge gave out early in the trip, so the instrument is now on its way back to Raymarine for repair under warranty. And it’s a little thing, but we kept losing the little black plastic caps on the tops of our stantions. They’d just pop off underway and go overboard, and we eventually ran out of spares. So we placed a quick order with Sailboat Owners for a set of stainless steel replacement caps, which we hope will be more durable and tenacious.

I’ve been playing this little game with our steaming light for some time now. It stops working, so I go up the mast with my multimeter and tools and coax it into working again. It tests fine for three or four days, so I consider it fixed. Then the day comes where we actually want to use it, and damned if it hasn’t quit again. I can actually see it up there sticking its tongue out at me. After two or three rounds, the fun has worn off, so there’s a new steaming light sitting on our chart table ready for my next trip up the mast.

With the exception of the transmission, none of these problems are voyage-ending. But sitting here in mid-September, looking back on our year, I think it has probably been a good thing that we first headed out in early spring and were able to do a thorough shakedown on all of our systems and gear, identify all our weak spots and then spend the downtime during hurricane season making adjustments. So much of what we did to prepare Eagle Too was based on research on what seemed to be working for others, or some notional idea of what we’d want or need once underway. But four months of theory-to-practice now allows us to better judge wants and needs.

We’ll shortly try and do some posts on what we thought were the most useful systems and/or pieces of gear, the things we would absolutely not want to leave home without.