We dropped anchor in the Garden Key anchorage off Fort Jefferson in the Dry Tortugas after spending 48 hours crossing 300 miles of open ocean from Isla Mujeres, Mexico. A welcoming committee greeted us. 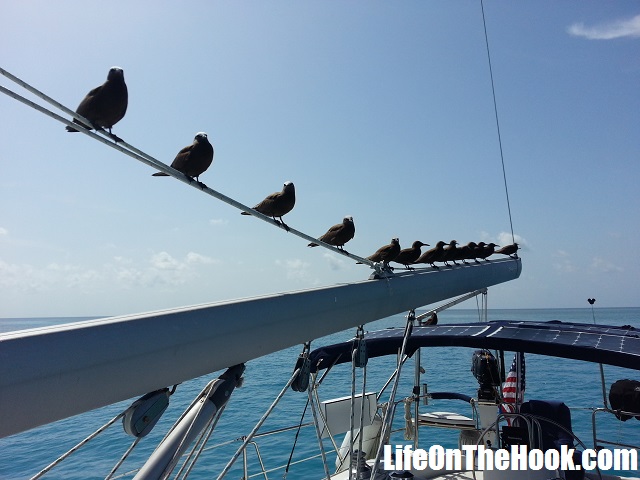 The Dry Tortugas are a wildlife sanctuary, and you could tell from their behavior that it never occurred to these guys that maybe we weren’t to be trusted. Even if you tried to shoo them away, they’d just squawk and flap a bit and then settle right back down.

To say that we were weary doesn’t begin to reflect how bone-tired we felt. But a quick check of the weather upon arrival showed that if we didn’t continue moving eastward soon, we might end up being pinned in the Tortugas for three or four days waiting out 20-25 knot east winds. So to reach our intended destination of Boca Chica Key and the marina at Key West Naval Air Station, we needed to exploit the predicted remaining day of settled weather and press on the following morning. That meant we only had 24 hours at Garden Key. And I really, really wanted to see the fort. I’m a bit of a history buff after all, and who knew when or if we may ever pass this way again. So in a supreme act of mind over matter, we pushed through the sleep deprivation fog and launched the dinghy to go ashore.

So let me stop you before you say anything. No, we were not supposed to go ashore. We hadn’t yet cleared back into the country. For that, we had to visit the Customs and Border Protection office in Key West, and that was still 70 miles and a full day’s sail east. But our American flag was flying and our “Q” flag wasn’t, so I calculated that the odds that anyone would even notice that we had just arrived from Mexico was extremely remote. Besides, a large high-speed catamaran and several seaplanes from Key West had just disgorged a hoard of day-trippers onto the island. So who’s going to notice two more tourists, we thought. 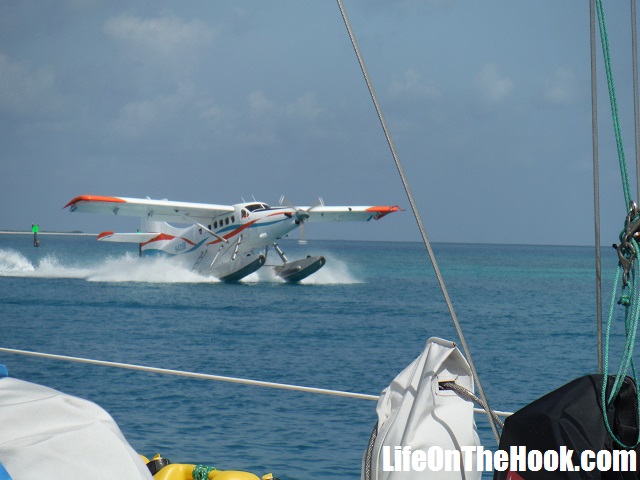 Yes, he did actually land that close to us!

I’m glad we made the effort. The fort was quite impressive. It should be, as it’s the largest masonry structure in the Western hemisphere. It’s so big that they had to quit building it before it was finished, because it was making the island sink. You can read more about it here:

It was very hot, and very dry. it is the Dry Tortugas, after all. It got the name because there isn’t any water there. None. Not a drop, other than seawater. And yet, during the fort’s construction, several thousand people made Garden Key home. So where did their water come from? We found out that the entire fort was actually designed to capture and store rainwater in huge underground cisterns. Unfortunately, the immense weight of the fort, which caused it to sink into the soft sand of the island, cracked the masonry foundations and allowed seawater to contaminate the cisterns.  One still functions, however, located in the fort’s parade grounds, and it is this cistern that still provides drinking water today for the National Park Service staff that reside there. Being a Ranger at this park is not a job that you commute to, at least not on a daily basis. They work a multi-day shift, living on the island until relieved by another crew. As for we visitors, well, everything we need to eat and drink, we have to bring with us. There are no concession stands dispensing cheeseburgers and Cokes and water coolers providing ice cold water to drink.

And isn’t Garden Key an amusing name for such a remote and desolate place? Obviously there was a 19th century publicist involved. I can just see the recruiting posters luring brick masons to sign on for a tour of duty during construction. “Come live and work on Garden Key, the jewel of the southern Gulf!”

Anyway, did I mention it was hot and dry? We’re talking, take a deep swig of water and pour some on your head and neck every few minutes, hot and dry. As we approached the fort, we saw a sign that said “No food or drink allowed in Fort Jefferson.”

We were dumbfounded. “They can’t be serious,” we said to each other, each of us holding a big half frozen water bottle. But do you think that two tired, groggy sailors who had just violated a host of border control laws by dinghying ashore before formally clearing in would be detered by a silly sign? We were not. We boldly marched into the fort, our life-sustaining H2O discreetly secreted in Rhonda’s backpack. Yes, we be pirates, arrgh. 🙂 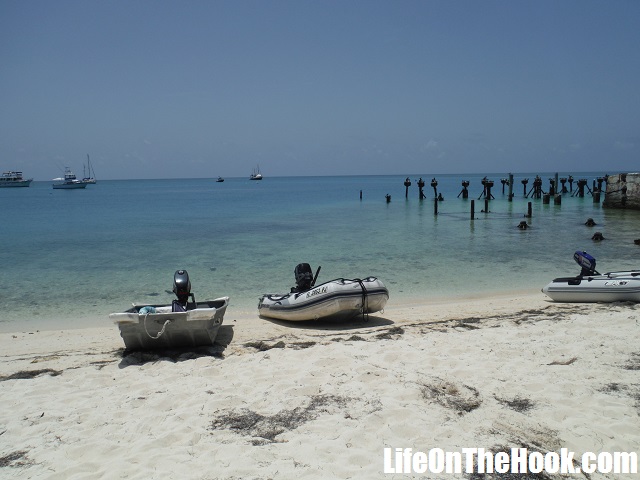 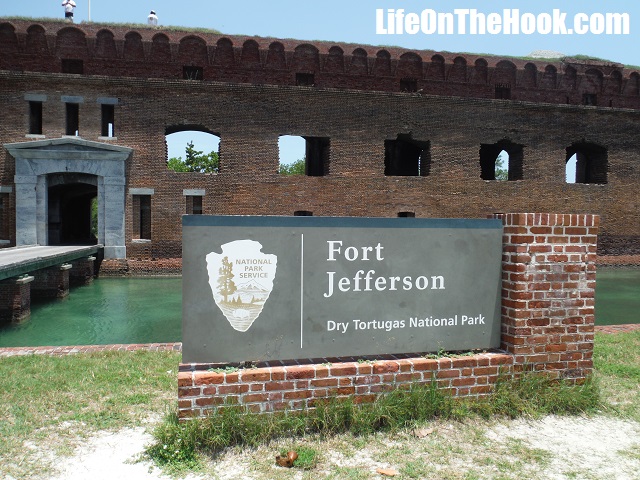 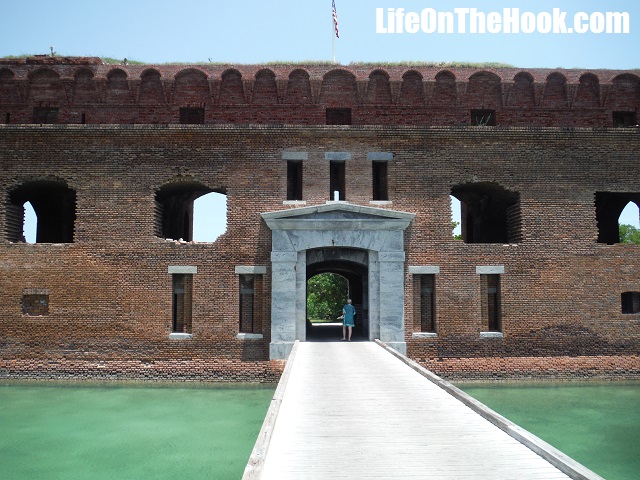 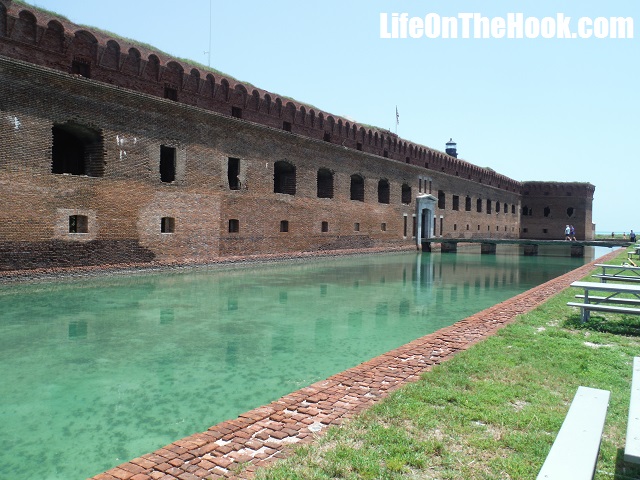 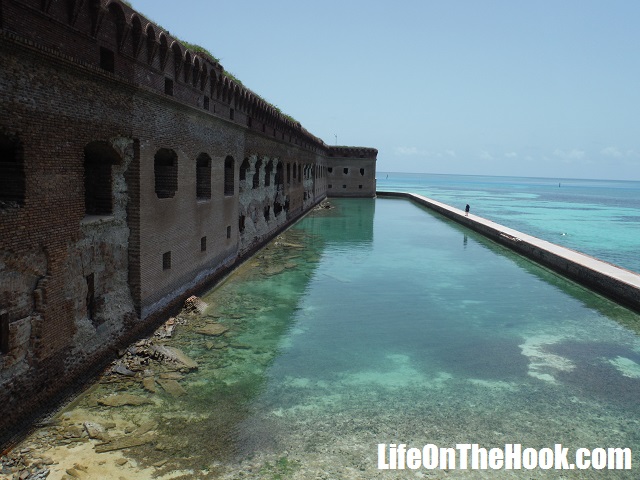 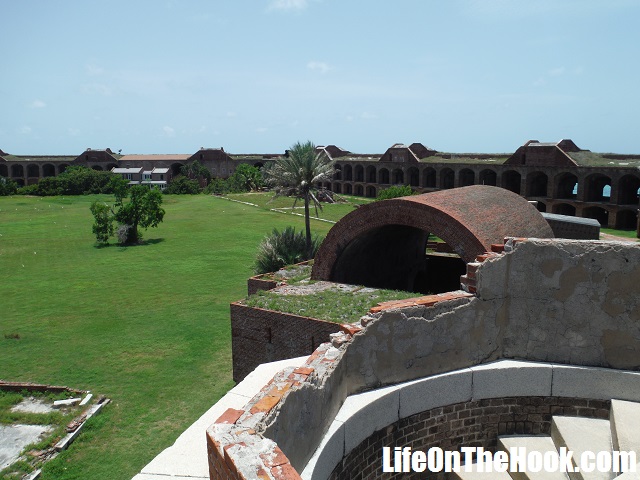 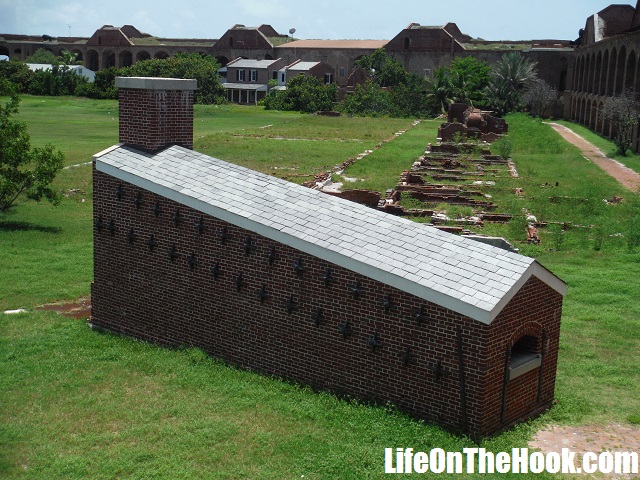 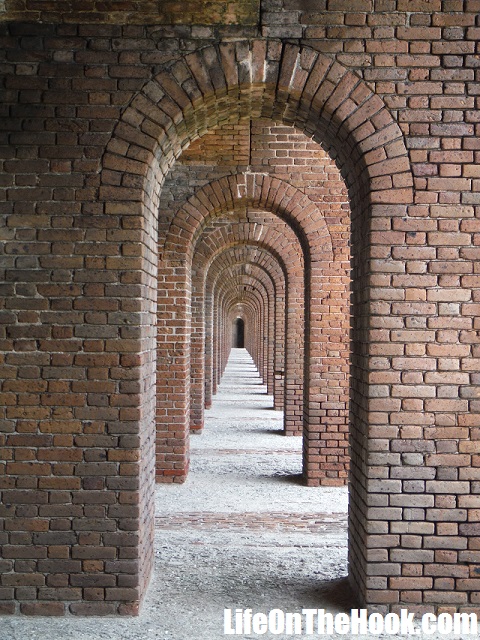 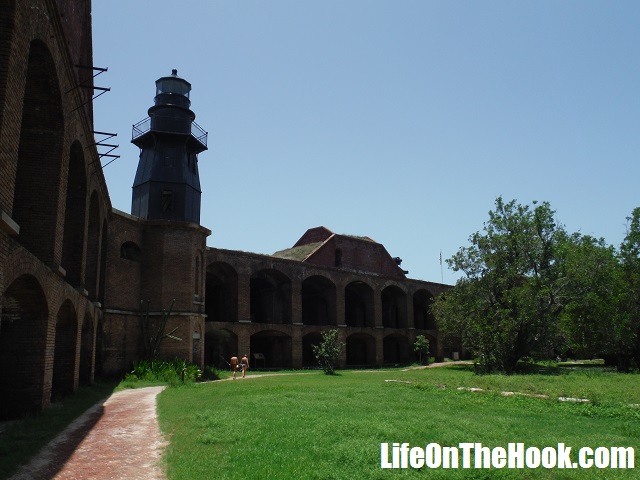 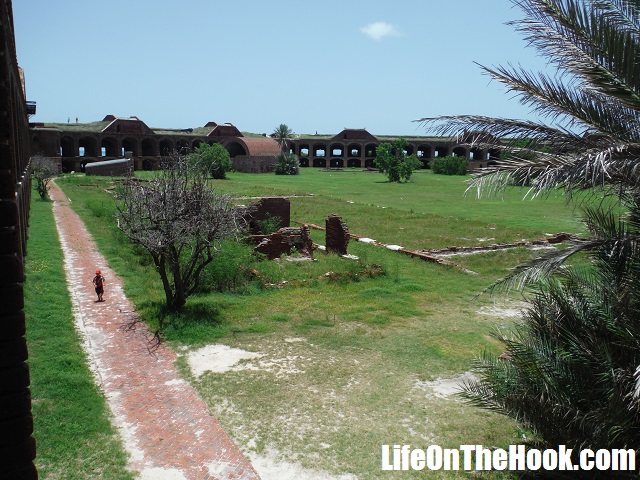 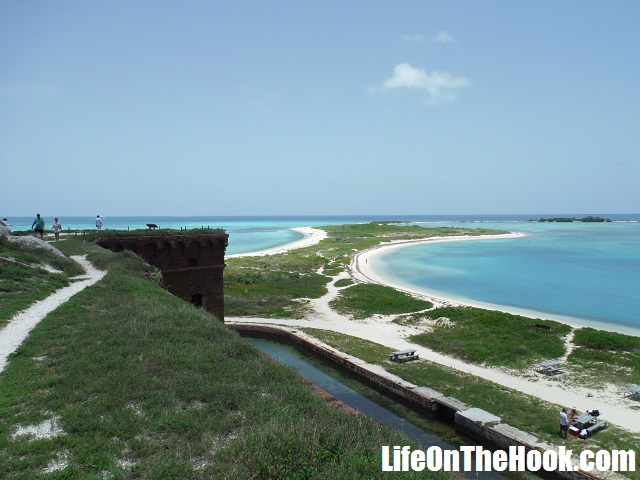 Here’s a bit more about how the fort was designed to capture and store rain water. 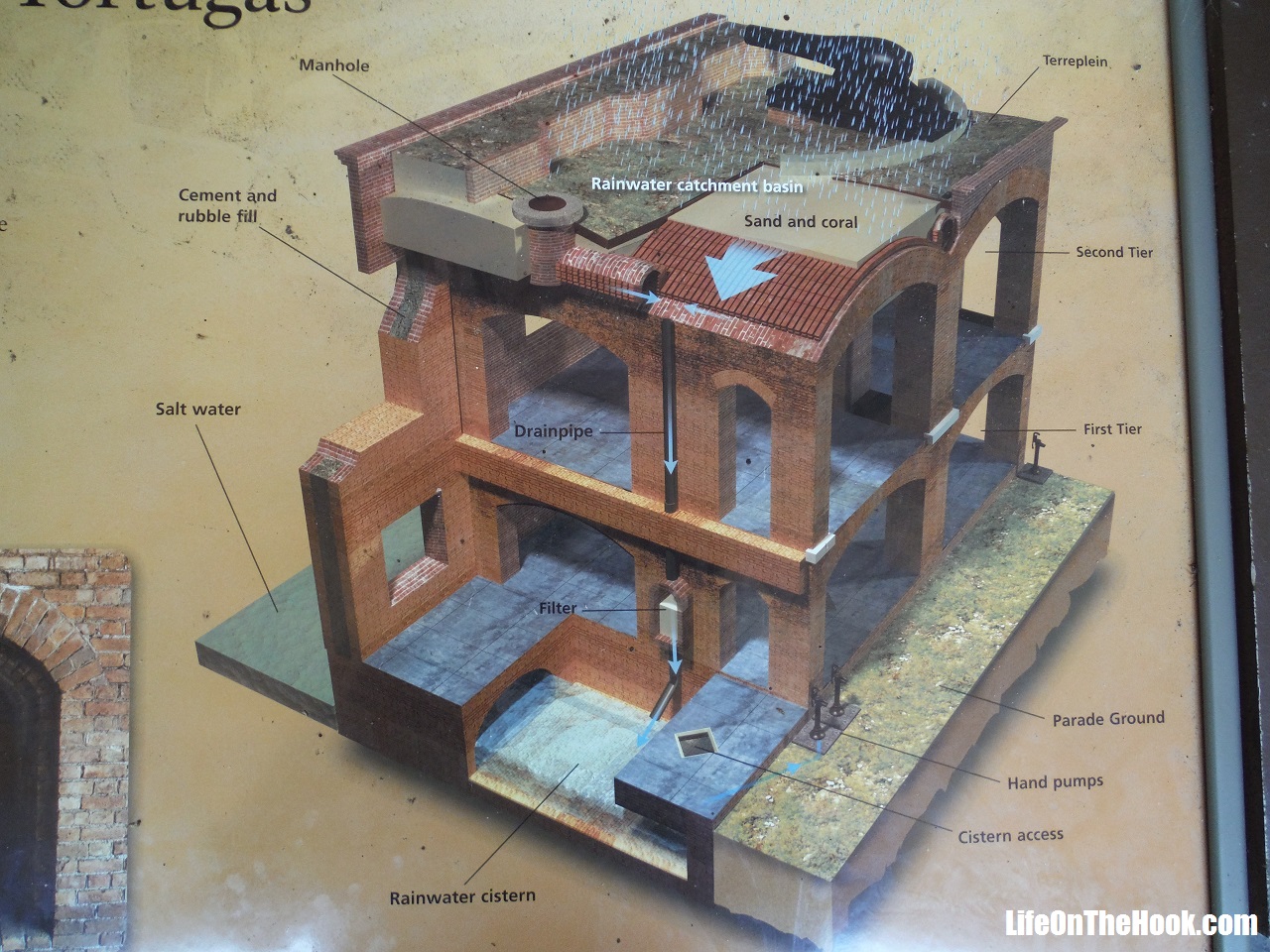 Beat down and spent from the heat and the fatigue of the passage, we returned to the boat just in time to wave goodbye to the Key West daytrippers. It was pretty novel watching this guy roar past our bow. 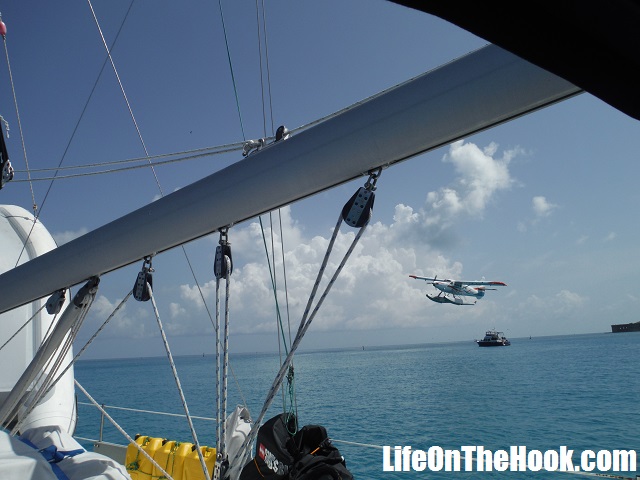 But before we finally called it a day, Rhonda spotted several enormous Goliath Grouper hanging out below our boat, and we just had to take a quick dip to get to know them. Unfortunately, they weren’t very friendly, and when they saw us coming, they disappeared into the murk. Very disappointing, these Florida waters. Them seemed so clear from the surface. But once the grouper sank about 25 feet, they just vanished. In Mexico, we could have easily seen them in much deeper depths. The water was so much clearer there.

5 thoughts on “A Day At Fort Jefferson”