Our alarm went off at 5AM. Now this is not typical for us. Being retired and on permanent vacation, since arriving here in Isla Mujeres we usually get up a little after 8. The Isla Mujeres cruiser’s net is broadcast on VHF channel 13 each morning at 08:30, and we like to be up and making our morning lattes while listening to the day’s news and social events for the local cruising community. But today we had a tour booked that required us to catch a 6:30 AM ferry to Cancun. So that meant an early reveille.

A couple of days previously we had rented a golf cart, which is the primary means of getting around on this little island. Two thirds of the traffic on the streets is made up of golf carts and scooters, interspersed with taxis, delivery vehicles and the occasional large truck. Our first stop was to drop off the cart before catching the ferry. The rental business wasn’t open at 6AM, but we’d made arrangements to park it out front and drop the keys in the door slot. Isla Mujeres is just that type of laid back place.

Then it was across the street and down a few blocks to the UltraMar passenger ferry terminal. These ferries are high speed catamarans that continually cross back and forth from Cancun to Isla Mujeres from early in the morning till late at night. 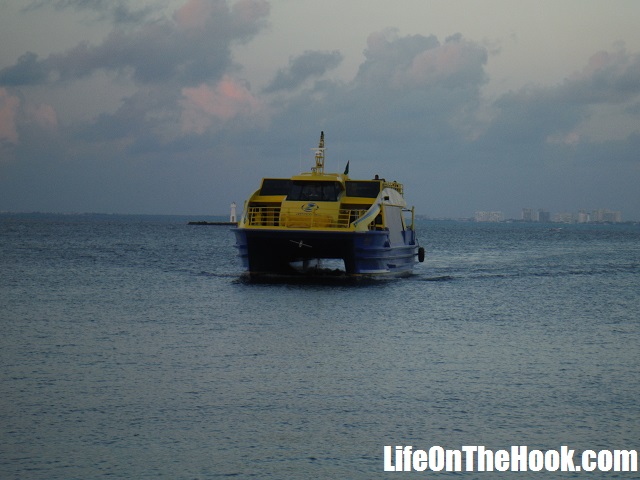 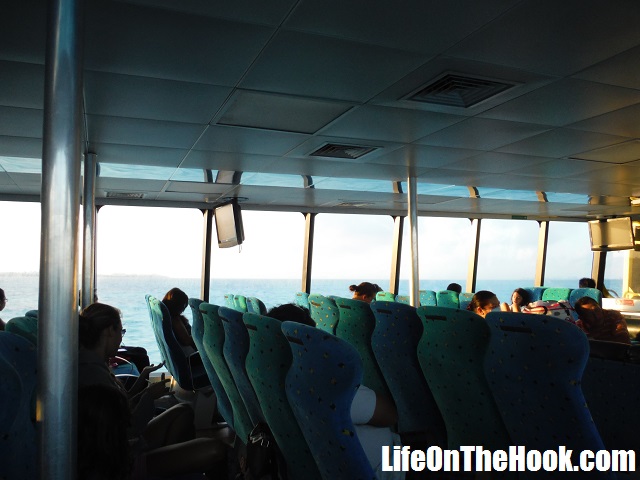 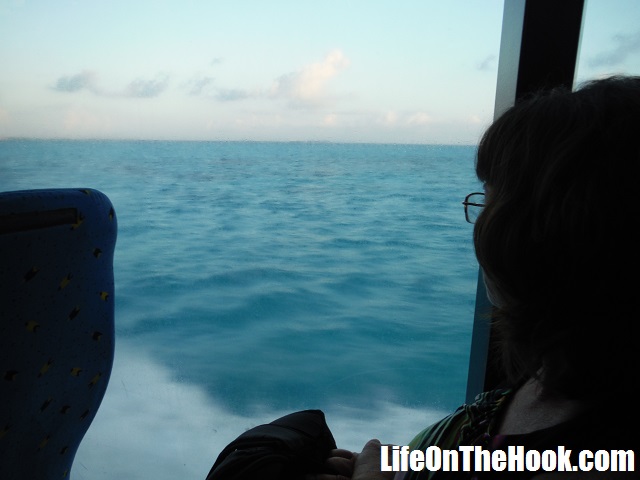 We arrived at the Puerto Juarez ferry terminal north of Cancun, where the bus that would be our ride for the rest of the day was waiting for us. 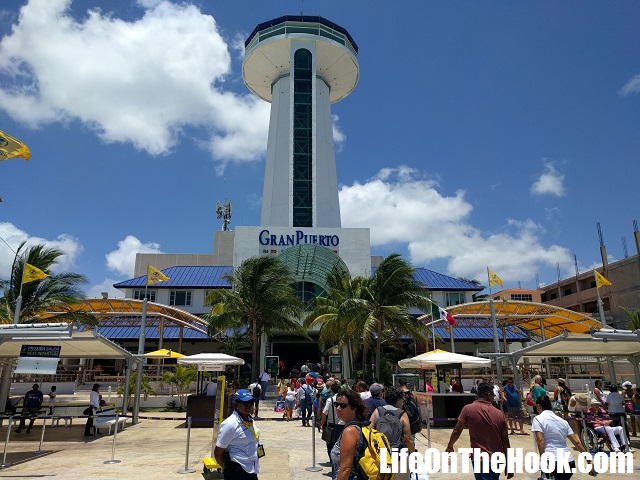 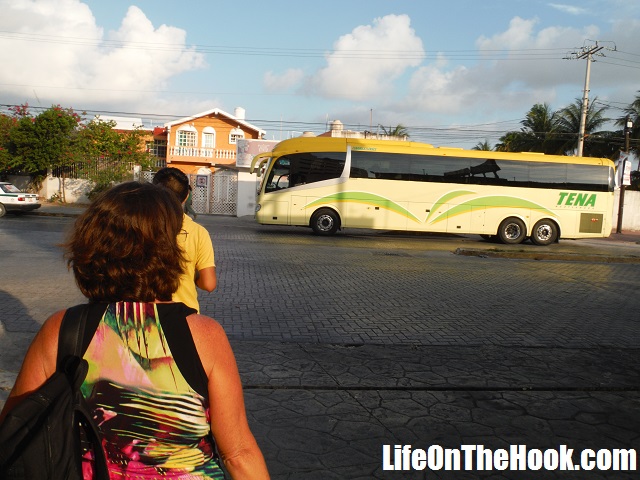 After swinging through more hotels than we could count to pick up additional passengers, we then headed west toward Chichen Itza. 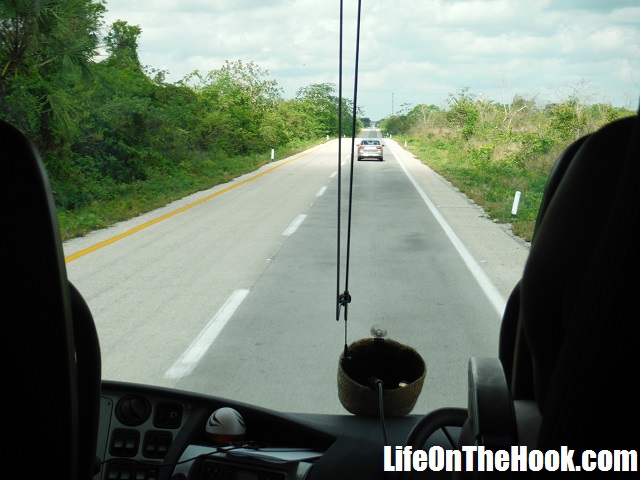 About two and a half hours later, we stopped for lunch. It was included in the tour, and while we ate, dancers entertained us with traditional Mexican dances. 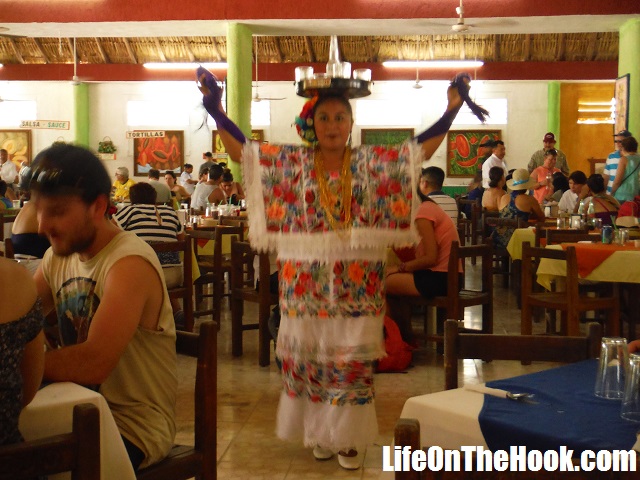 Finally, in the early afternoon, we made it to Chichen Itza, described as one of the world’s seven man-made wonders on par with places like the Great Wall of China and the Taj Mahal. Our guide spoke excellent English, and his enthusiasm for the Mayan culture and history was clearly evident. WIth his words he painted images for us of how things would have looked and sounded if we had been there a thousand years earlier during the pinnacle of Mayan civilization. 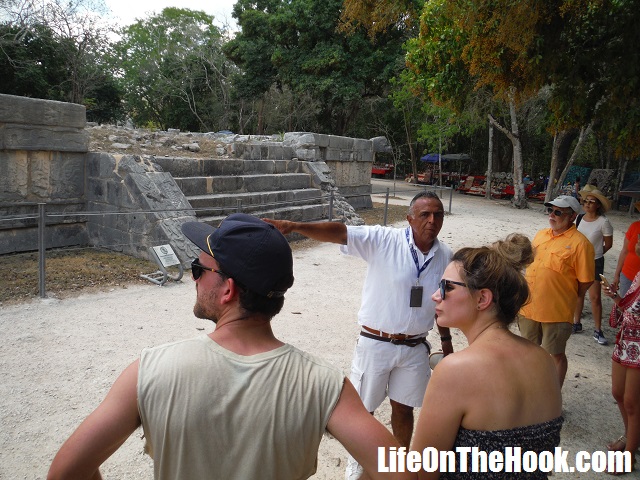 After an hour’s guided tour, we were free to wander around at our leisure to take it all in. 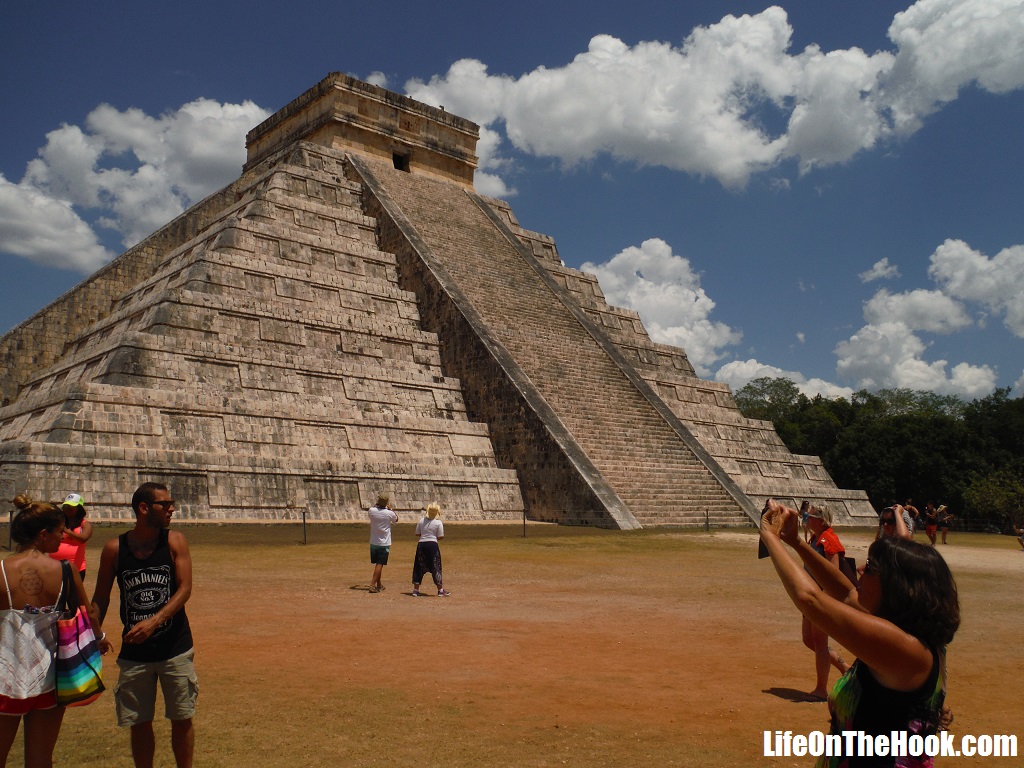 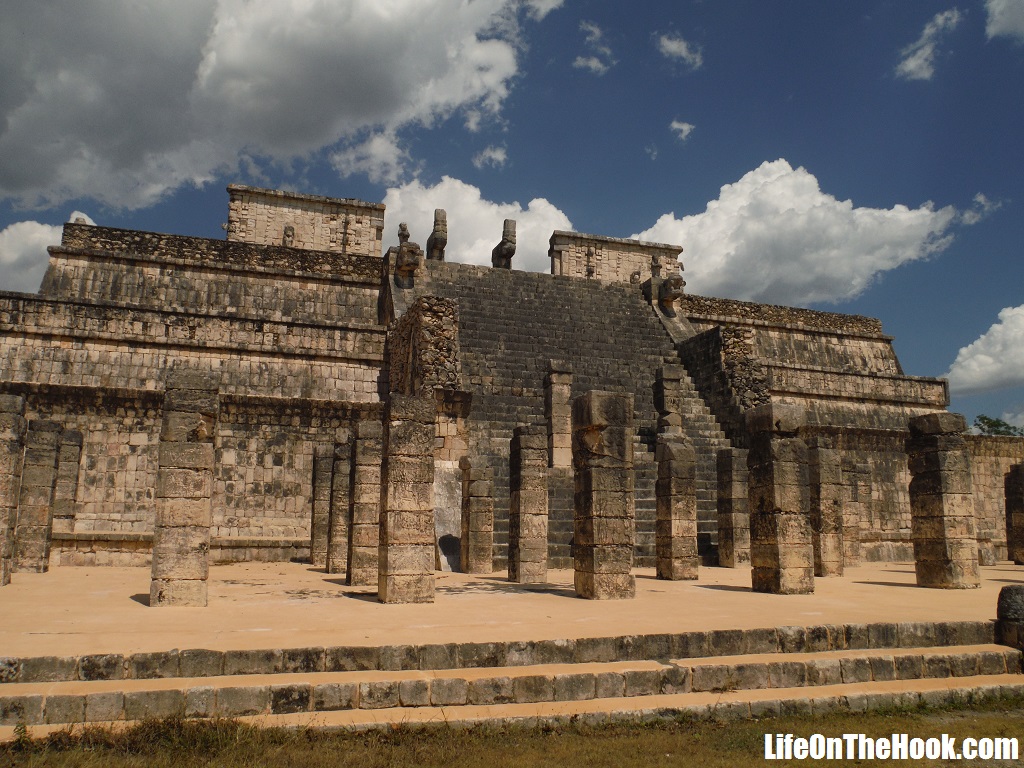 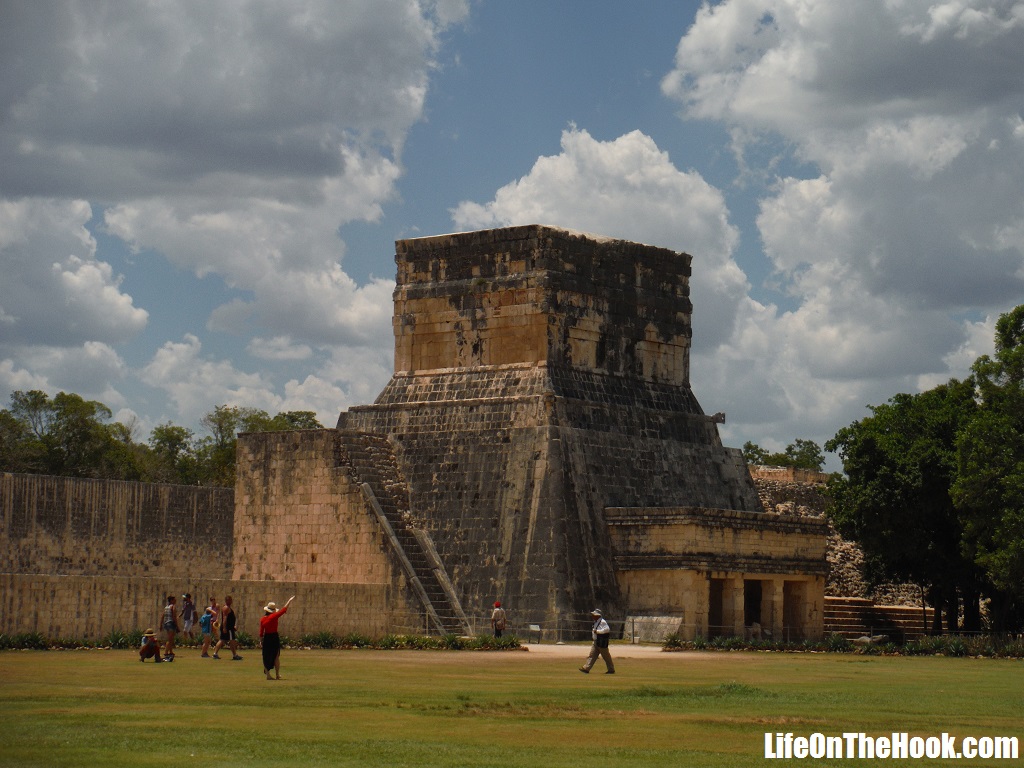 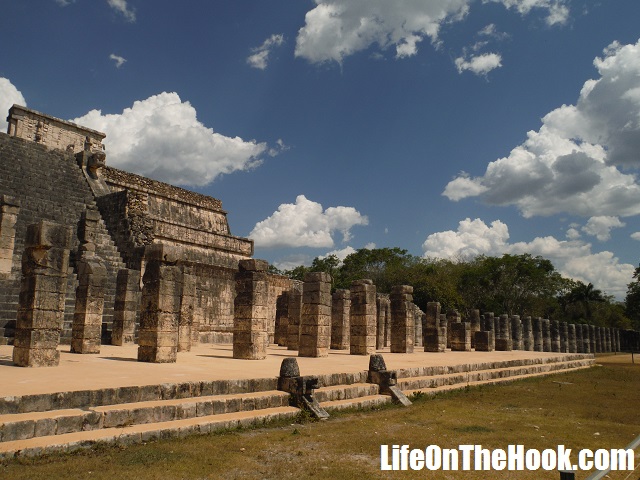 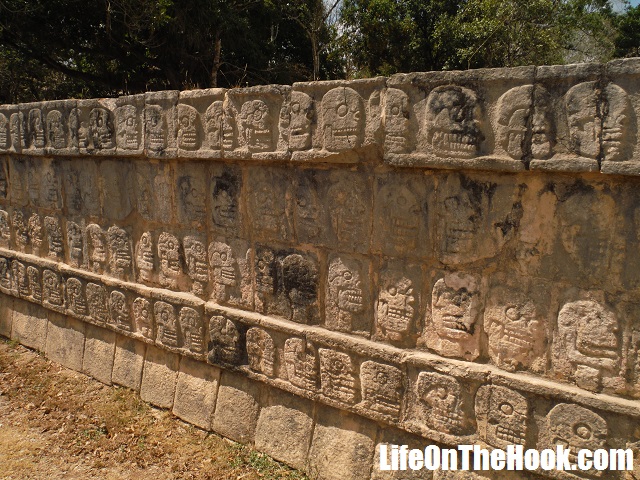 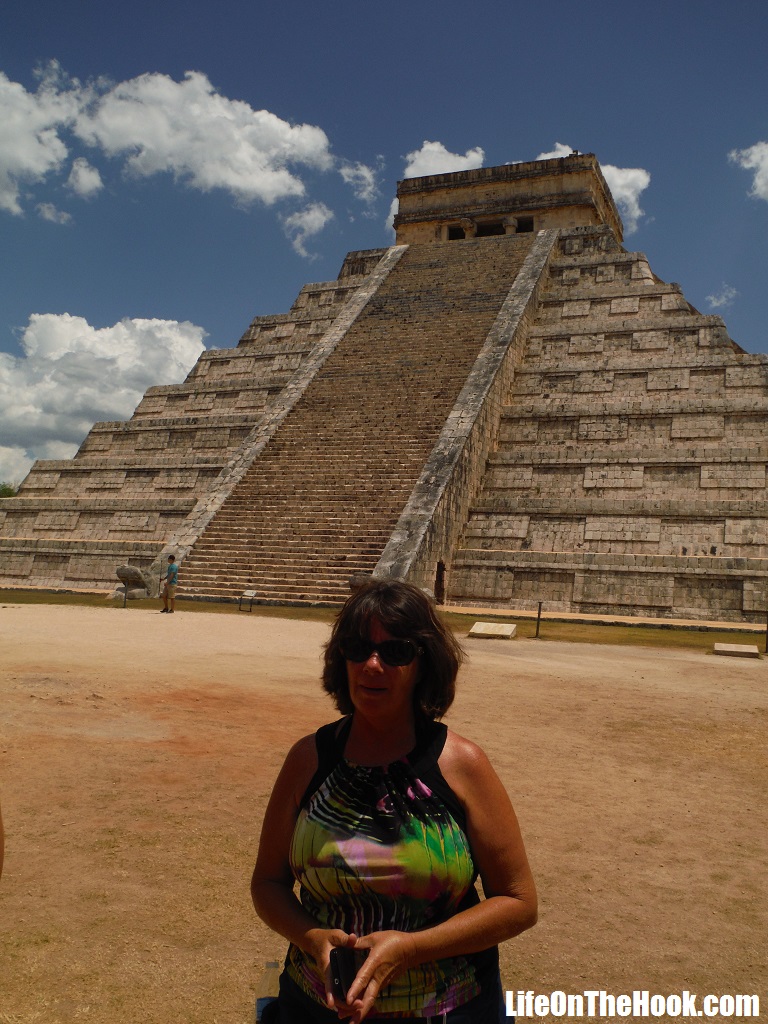 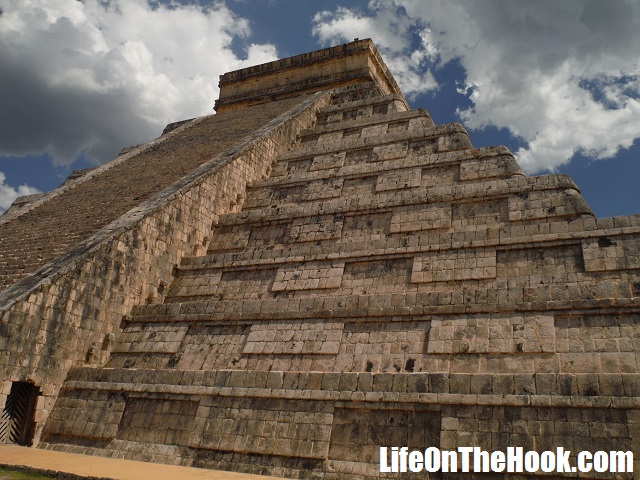 The heat began to really wear on us after a couple of hours, with temperatures over 110°F. But I circled back one more time to re-visit the ball court, where Mayan warriors once battled in life-or-death competitions. The game was played with a natural rubber ball a bit larger than a baseball, which the contestants attempted to pass through the goal stones using only their arms, legs, and torsos. To remain in play, the ball could not bounce on the ground more than once, and the use of hands, feet, or the player’s heads was forbidden. As our guide explained, the game was probably often played for sport, but at times it was also used as a surrogate for warfare. While spectators lined the tops of the court walls, opposing tribes or factions would field seven man teams composed of their best warriors, who would battle until one team scored a goal. It is believed that the losing team was not automatically condemned to death, but would rather beg to be executed than have to return to their tribe in defeat, having lost whatever cause they played to defend. Stone carvings lining the court depicted scenes of losing players being beheaded by the victors. 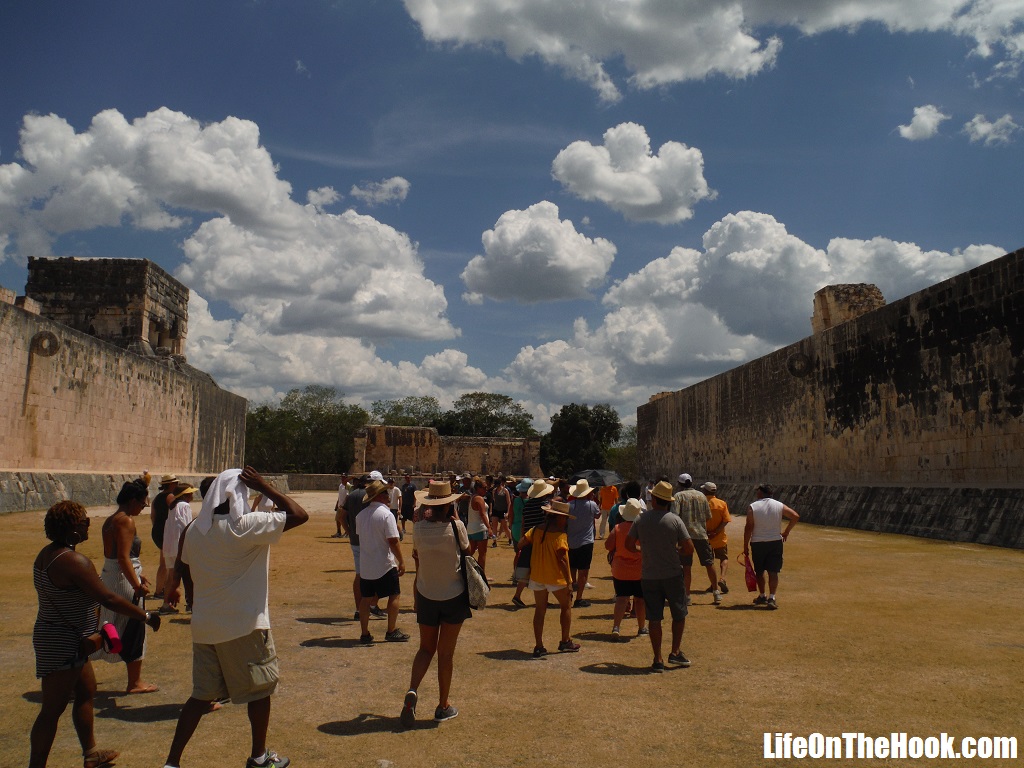 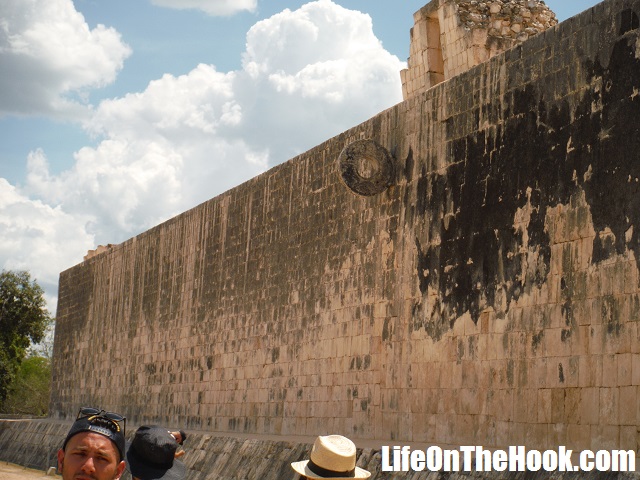 The rulers of the city would watch the game from their pavilion atop the court wall. 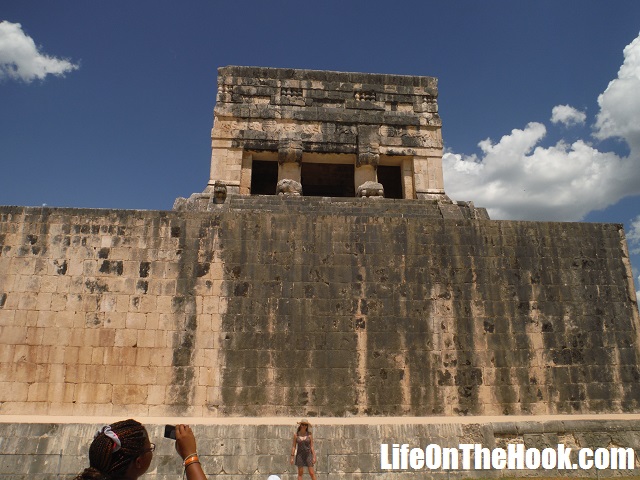 It’s mind boggling to consider what a spectacle it must have been.

Our time at Chichen Itza drew to a close, and we re-boarded our bus for a trip to a cenote, or a collapsed limestone cavern filled with water. There are no rivers in the Yucatan; surface water flows instead through the permeable underground limestone. In certain places, a sinkhole will form, allowing access to this subterranean water. It is believed that there are over 4,000 cenotes in the Yucatan, and many became the central water source for a village, town or city that would be established nearby. 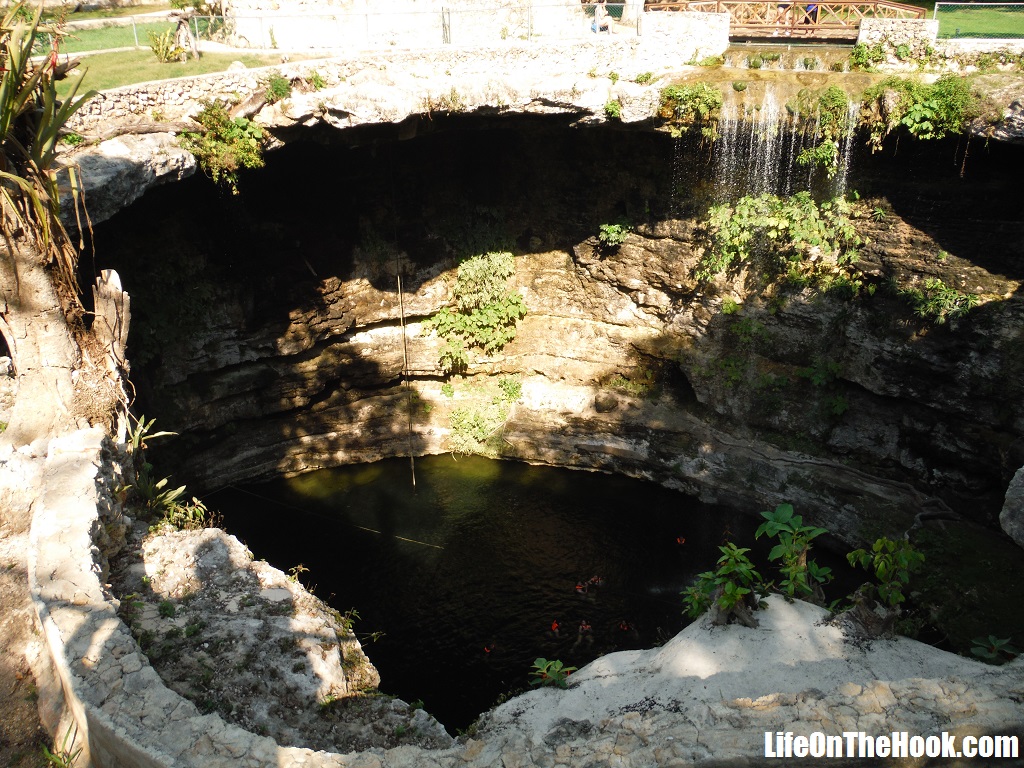 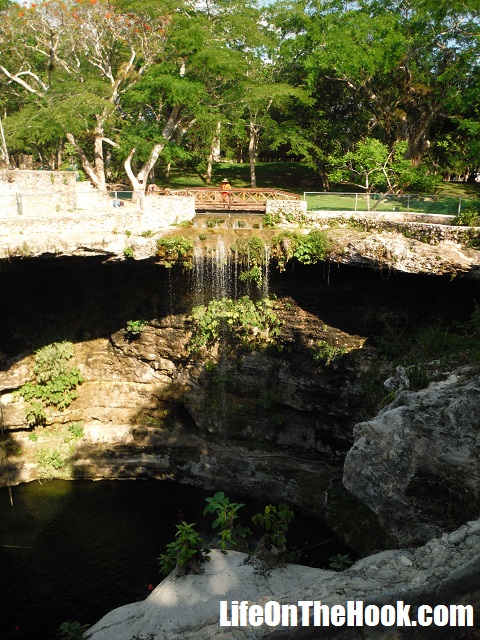 An hour was allowed for swimming, and then we headed to our final stop, the 16th century Spanish town of Valladolid. 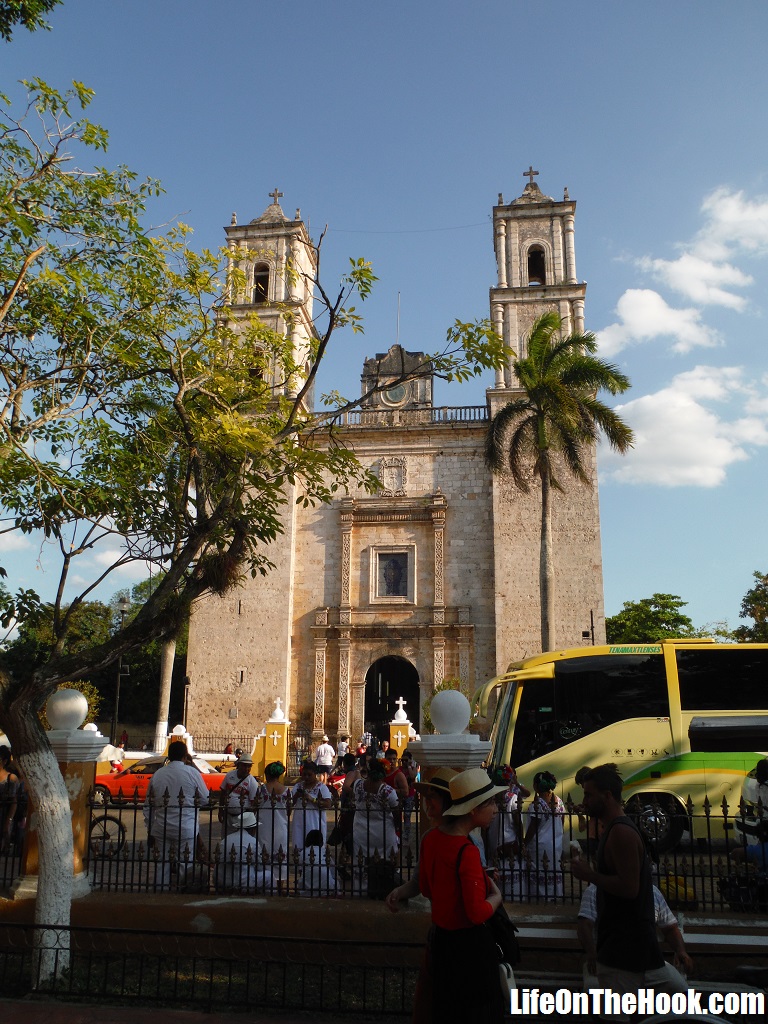 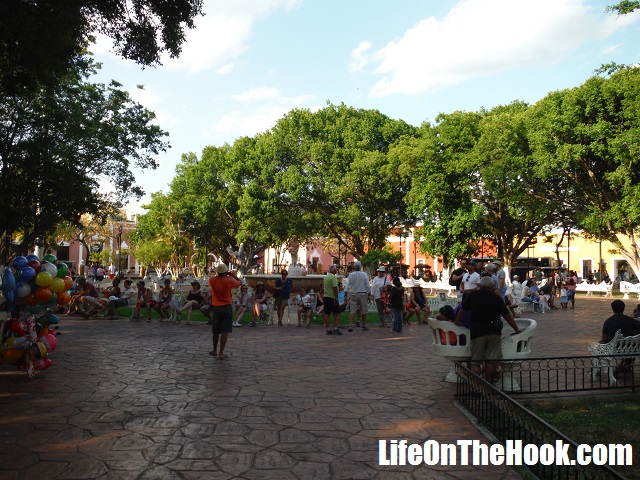 The sun now getting low in the western sky, it was time to once again board our bus, and return to Cancun. We were deposited at the ferry terminal, where we caught the UltraMar back to Isla Mujeres. Back on the island and now sans golf cart, we walked the 20 minutes back to our marina, arriving back onboard our boat at about 9:30 PM, over 15 hours after our departure. We wearily peeled off our shoes, poured ourselves a nightcap, and recounted the events of this amazing day.

We have one more adventure here on Isla Mujeres that we want to undertake before we start preparing Eagle Too for heading further south. Whale sharks are making their annual migration through the Yucatan Channel, and it’s truly a once-in-a-lifetime opportunity to go swimming with these enormous creatures. Hopefully we’ll have some pictures soon… 🙂