It was the summer of 1998 when I ran afoul of the Baltimore Mob. I was executive producer for a video crew shooting training films for the Navy. We were on location onboard the hospital ship USNS Comfort, which at the time was moored at a dock on the Baltimore waterfront. Not the scenic, trendy and very touristy inner harbor, with its fine dining and night clubs. No, I’m talking about the seedy commercial docks, which looked like a scene straight out of On The Waterfront (or a recent Batman film for those lacking an appreciation for film noir). We’d wrapped on 10 days of location shooting, and the crew was now setting up to get some final establishing shots, showing the ship from the head of the pier.

Just as the director ordered the cameras to roll, a huge black Lincoln sedan with deeply tinted windows pulled up. The driver’s window whirred down, and a voice with a thick Jersey accent said “Who’s in charge?”

“Get in,” the voice said, as the rear door opened.

Well this should be interesting, I thought. “Keep shooting, I’ll be right back” I told the director as I climbed into the car.

The driver deposited me in front of a featureless block building. “Get out. Upstairs,” were my only instructions. Entering the building and climbing the stairs, I found myself in a large, mostly empty room, facing three men seated behind a long table. Ham fisted and thick-necked, they could have easily been extras from Goodfellas.

“Who are you and what do you think you’re doing?” the one in the middle wearing the biggest gold pinky ring I’ve ever seen asked.

I gave them my smuggest smirk. If you know me at all, you know I’m quite an accomplished smirker.

What does any of this have to do with Marina Hemingway? Well, I’ll tell you. When we were in Marina Gaviota Varadero, the atmosphere was very professional. Everything was run by clean cut men in neatly tailored uniforms sporting friendly smiles. But when we tied up to the bulkhead in Marina Hemingway, we could immediately tell that it was operated in an entirely different manner.  Every cruiser there had their “guy,” who manages their interactions with the broader Cuba. We were still tying off our lines when our “guy” introduced himself. In less than five minutes, he had attempted to sell us cigars, lobster tails, and a tour of Havana.  He let us know that if there anything we needed or wanted, anything at all, to let him know and he’d arrange it.  He said it in a way that implied that if we wanted anything, we were expected to arrange it through him. We were in his territory, and for all intents and purposes, we belonged to him.

And it felt just like the day that I found myself standing in front of those three charming gentlemen in that empty second story room on a dock in Baltimore. 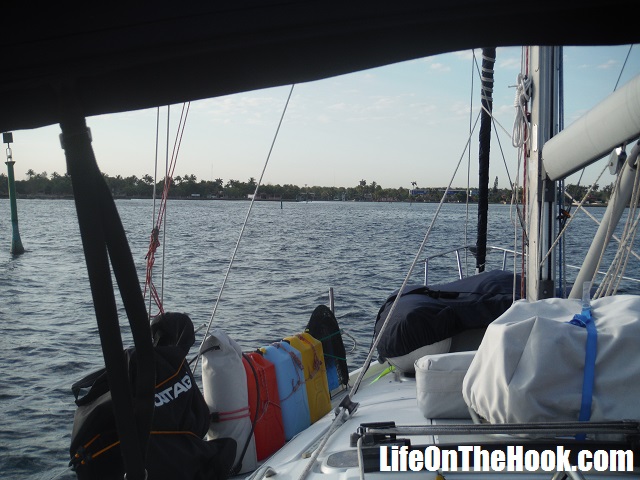 Hemingway Marina Entrance From The Water 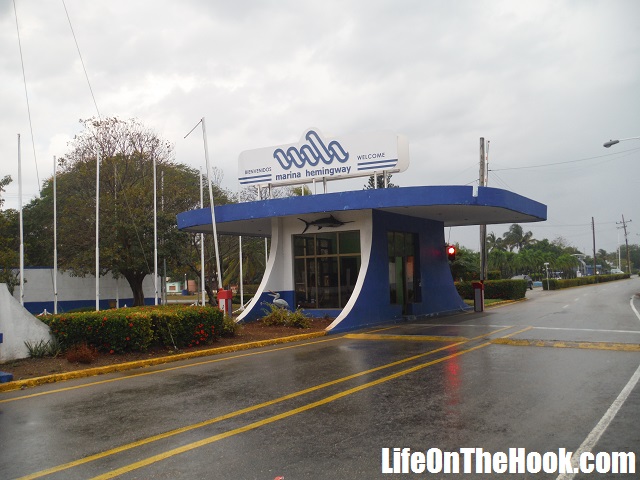 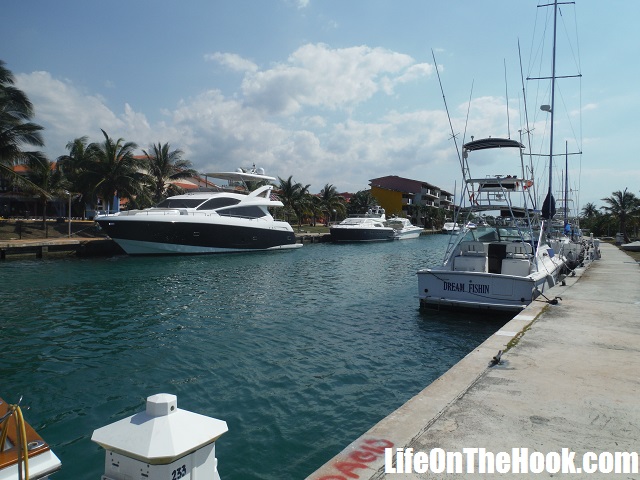 We were actually able to make a little game out of dealing with our “guy.” Once we had recovered from our rather unpleasant overnight passage from Varadero and had out wits about us again, we started looking for ways to subvert the system. You don’t need your “guy” to arrange a car into Havana at his price of $25 CUC if you’re willing to walk into town and flag down a mechina (hop on hop off taxi) for $5. You don’t have to end up at the restaurant your “guy” strongly recommends (because it’s probably owned by his cousin) if you take the time to meet some of the other cruisers and ask for suggestions. Remain deliberately vague about your departure date, and your “guy” doesn’t really know when he has to come lean on you to buy those cigars you said you’d consider before you left. Our guy usually showed up at our boat about 0900 to see if we wanted anything that day. So we cleared out late the night before, well after he had left for the day, and threw off the lines at 0800 the next morning. I’d have loved to see his face when he saw the empty spot after he arrived. 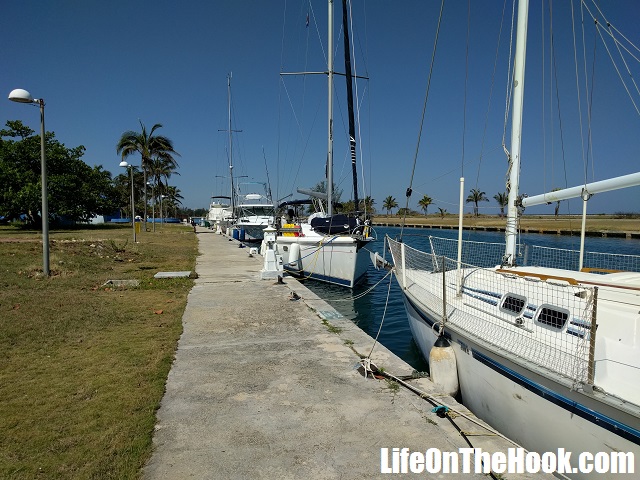 Our Spot In Canal 1

In short, Marina Hemingway has quite an air of racketeering about it. Operators control their turf, and you’re expected to play along. Did it bother us? Not unduly. But we really didn’t like it, which made it easy to leave. 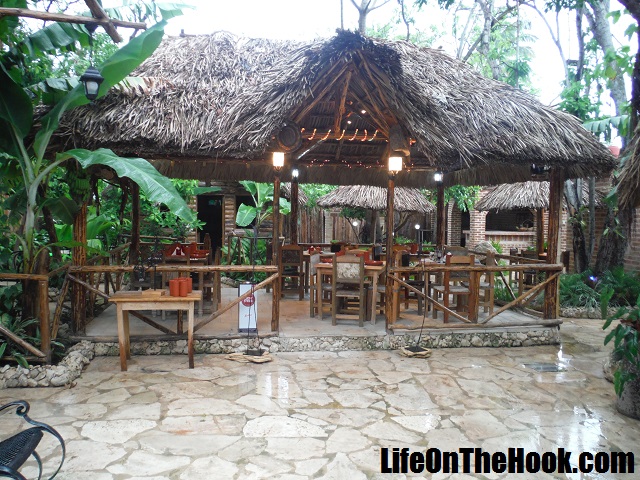 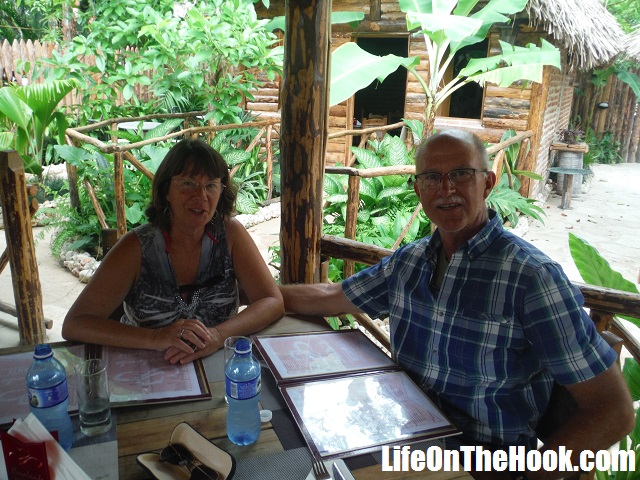 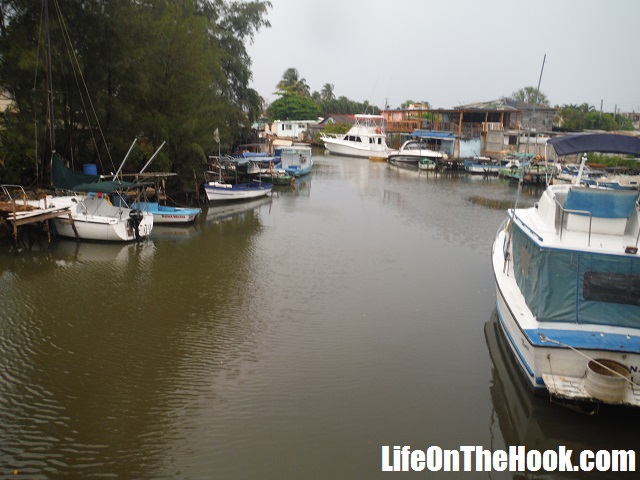 A Nearby Marina For Cubans

And how did my encounter with the Baltimore Mob turn out? Well, once I explained to them that I was with the Government doing work for the Navy, they became my new best friends. Across the pier from where the USNS Comfort was docked, they were apparently running some sort of scrap metal salvage operation, an operation that I surmised involved the Russians based on the flags flying from the ships that were being unloaded. An operation that they didn’t want anyone paying any notice to. They initially thought my film crew was with 60 Minutes, and seemed willing to break a few legs to discourage publicity. But once they learned that I could care less about their little scrapyard, it was all handshakes and “what can we do to help.” They even offered us the use of a boat if we wanted. I politely declined. Something about a boat ride with a Baltimore mobster just felt a little… unsettling. 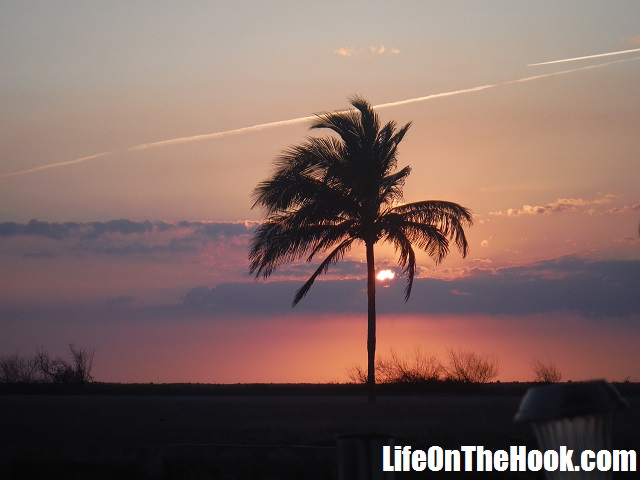 Sunset From Our Canal