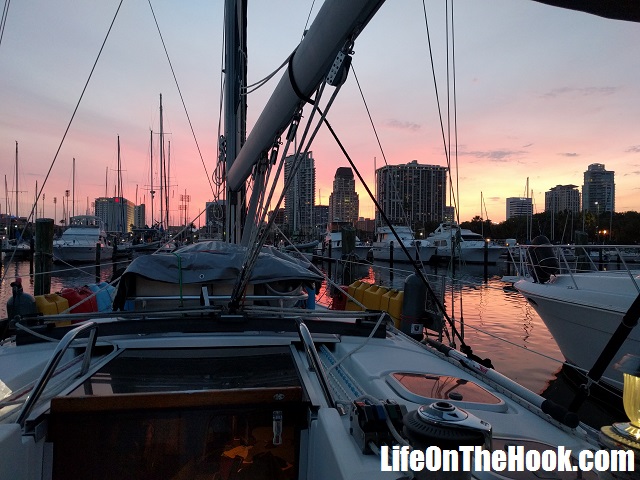 So we’re sitting here in the cockpit sipping freshly made Mojitos and watching the sun set over the city, and I found that I might actually have a moment to write something for the blog. So let me begin by saying that we’re having to rethink the entire purpose of Life On The Hook. For the past two years it has been my creative outlet while we talked about cruising, planned to go cruising, and made preparations to go cruising. But now that we’re actually cruising, well, it turns out that for us at least, being cruisers means having very little time to spare for things like lengthy blog posts. A typical day consists of making breakfast, reviewing our planned move for the day, taking a look at the weather, reviewing the charts, seeing if there are any draw bridges to contend with, getting the boat ready to go, checking our stowage to make sure everything is tied down, starting the engine and weighing anchor or throwing off the lines and getting underway. Then it’s a whole day of navigating and sailing the boat, followed by docking or anchoring, making power, making water, making dinner, making sundowners, cleaning up, and then sitting down to plan the next day’s trip, which includes a detailed review of the weather and the charts for the area we expect to traverse next. So an hour or two to edit pictures and write an elaborate blog post? Forget it. Just not enough hours in the day. If you’ve been following us on Facebook, you’ve probably figured out that it’s become our primary means of telling folks about what we’re up to each day. If you’re not following us, and you would like to stay up with where we are and what we’re seeing and doing, you really should Like our page.

So today we had a few things we wanted to accomplish. First and foremost, I wanted to find a local Tohatsu dealer where I could take our crapped up outboard carburetor to have it boiled clean, and possibly pick up a new one as a spare. We needed to talk to the Post Office in Pensacola about the fact that they hosed up our mail forwarding. We’re using the mail service St. Brendan’s Isle to handle our mail now that we’re traveling constantly, and while the form we submitted to the Post Office clearly listed our new box number at St. Brendan’s Isle, they neglected to put it into their system, so our mail has gone a bit wacky.  And we had a Sailrite order to complete. Just south across Tampa Bay in the Bradenton area are Deb and TJ on S/V Kintala, a cruising couple that blog at The Retirement Project that we’ve followed for several years now. Deb has a Sailrite sewing machine onboard and is supposed to be pretty handy with a needle, and we have determined that we need some covers made for our Scuba tanks and watermaker that we store on deck. We described what we needed, she put the material list together, and we placed the order.

In our time living in downtown Pensacola, we got to be on a first name basis with the mail clerks at the Post Office, so when I called and explained the problem, they filled out the paperwork for us and assured us that it would all be taken care of in a day or two. And The Great Oracle (Google) told us that there was a Tohatsu dealer a little over three miles away. So we broke out the Back Bay folding bikes and headed across town. 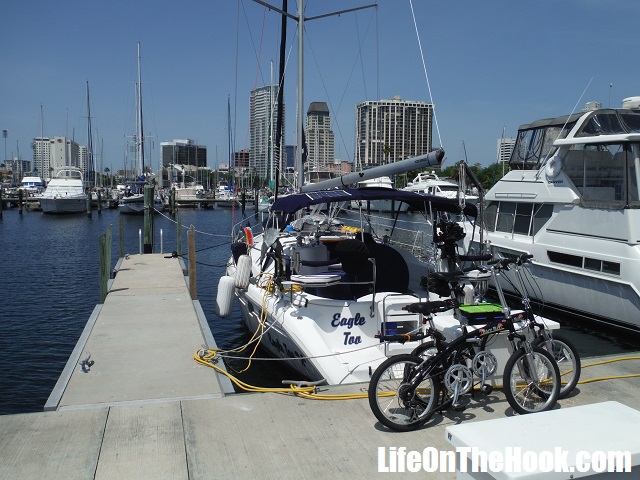 St. Petersburg is turning out to be a really cool town. It has an attractive downtown full of parks and great street culture, with an incredible number of bars and restaurants with streetside service. They don’t just have bike lanes, in places they have completely separate bike highways to get around town. 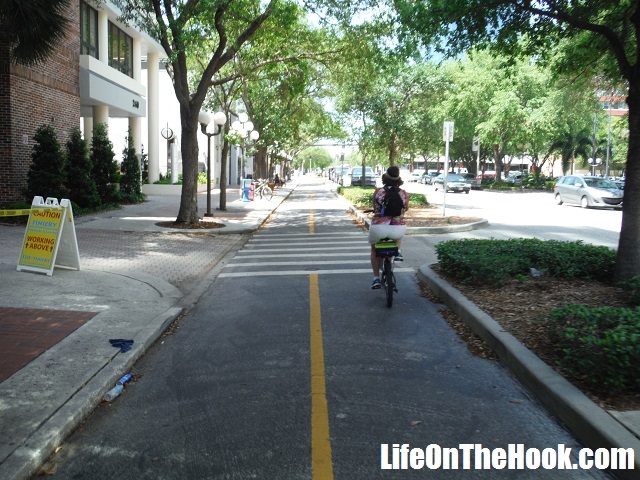 We peddled the three point something miles to the outboard shop past neighborhoods full of Craftsman style houses lining brick paved streets. 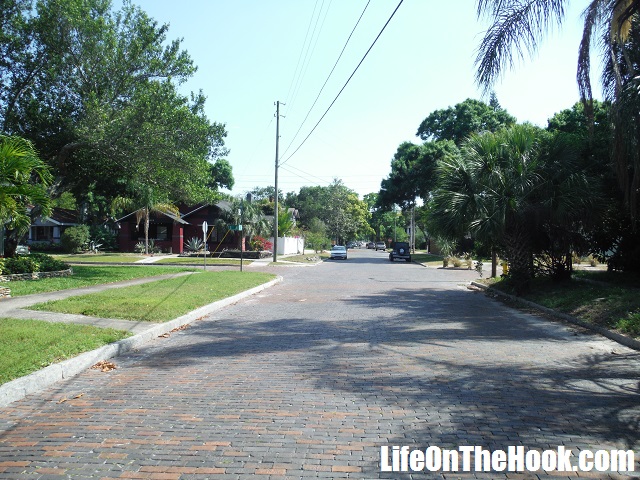 Once we arrived the staff there bent over backwards to help us. They didn’t have a carb in stock to sell me (yes, I called first and I knew that before we went), but they offered to take the carb off another 6HP outboard and sell it to us so that we could leave with one in hand rather than have to wait three days for an order to come in. 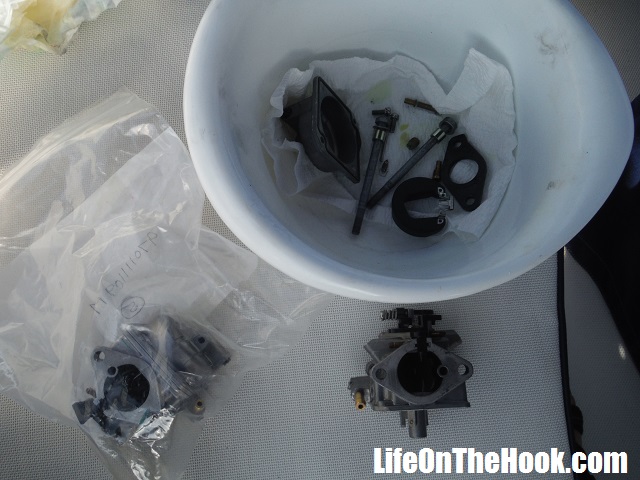 Meanwhile, they took the carburetor I brought in and put it in their soak tank. Since it needed an hour or two to soak, they suggested a nearby Italian market for lunch. So we gave it a try.

The name of the place was Mazzaro’s, and it was absolutely amazing. Think grocery store, produce market, butcher shop, wine cellar, espresso café, bakery, deli, and family Italian restaurant all mashed up into one place, and you’ll get an idea of what it was like. After lunch we wandered around taking pictures, it was so colorful. A delightful way to while away a couple of hours while our carb soaked at the engine spa. 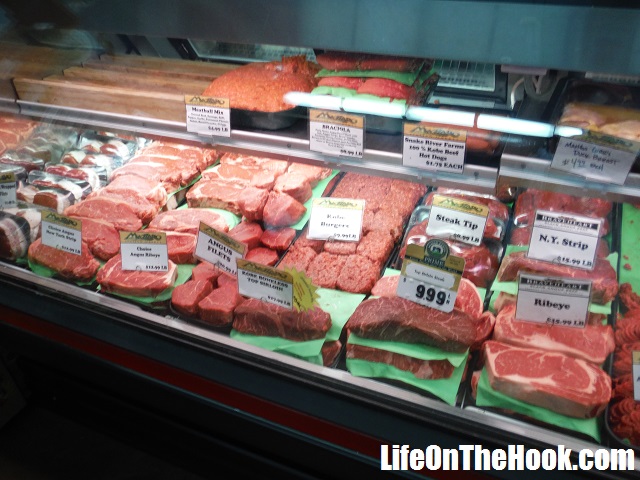 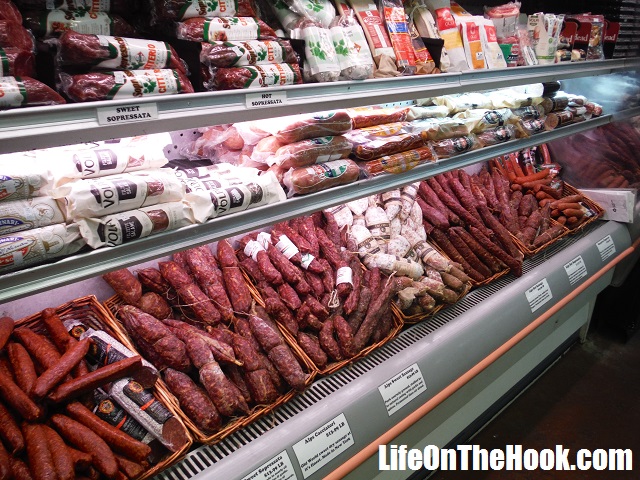 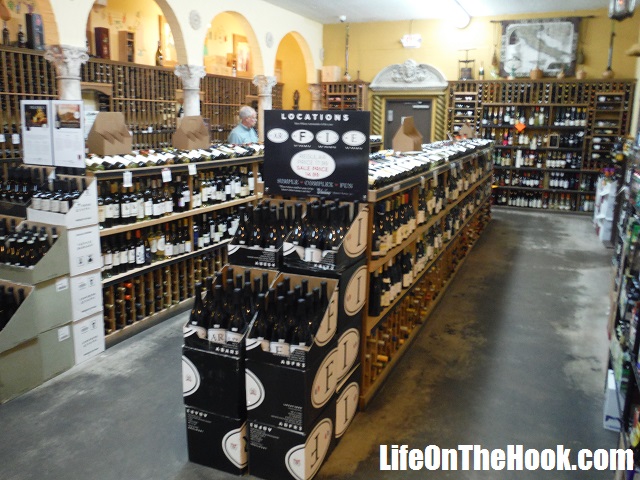 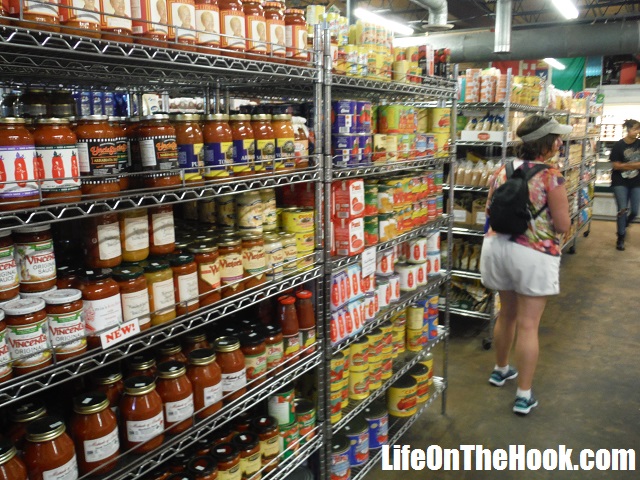 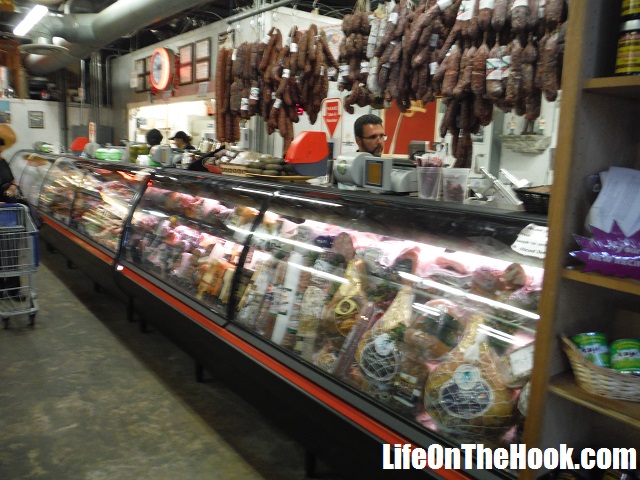 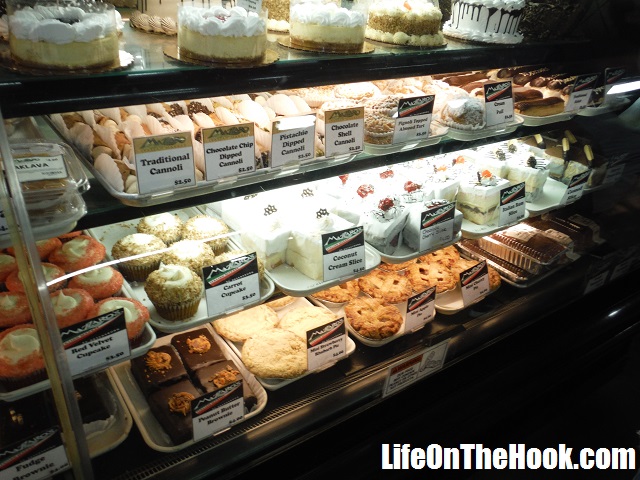 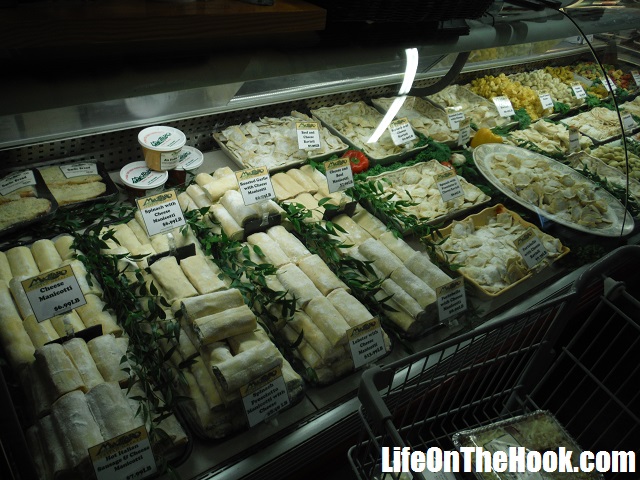 Riding back to the boat, we stopped briefly at the waterfront park next to the marina to watch the rehearsals for a Theater In The Park production of Monty Python’s “Spamalot,” which opens tomorrow night. It’s a show I’ve always wanted to see, and we’re going to pack our camp chairs over there tomorrow or Thursday. Tickets are “pay what you can.” Seriously. That’s what they’re asking for. 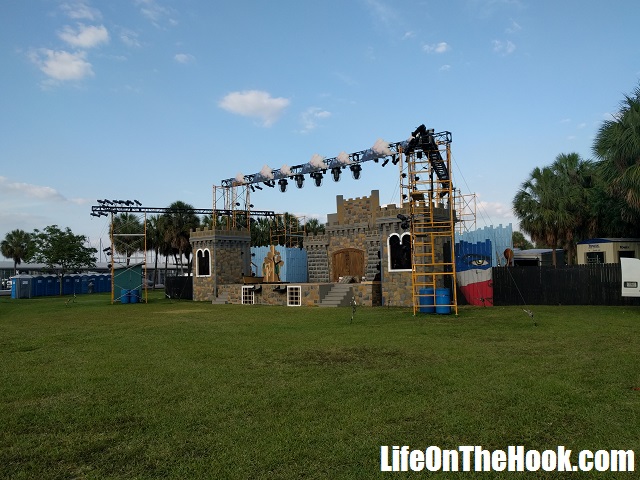 So at the end of the day, we checked off all of our objectives, which qualifies it as A Very Good Day. So far this is probably our favorite town of all the places we’ve stopped, and we’re planning to spend at least a few more days here. The Salvador Dali museum is highly rated, and is only a couple of hundred yards from where we currently sit, there’s a Dale Chihuly exhibit in town, who is one of our favorite artists, and we really want to bike up to the Sunken Gardens, the local botanical garden, because Rhonda does love her plants.

So now we’re sitting here having sundowners while Rhonda feeds her new friends. Days like this make me wonder why anyone would ever want to do anything else. 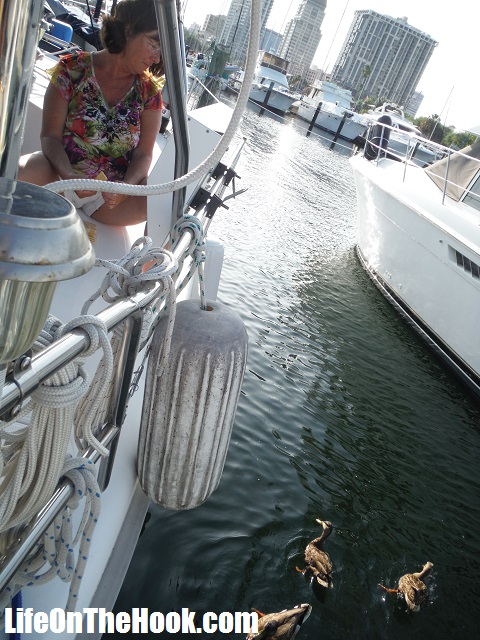 9 thoughts on “St. Petersburg And A Very Good Day”