In our previous post Rocking The Cellular World, I described Google’s foray into the cellular communications market, called Project Fi. At the time, I hadn’t yet pulled the trigger and switched my phone to their program (you can’t really call it a network, since it encompasses several different ones all bundled together). But their program just makes too damn much sense for someone with a lot of international travel in their future (which would be us). So I finally went ahead and completed my application.

Within two days, my Project Fi SIM card arrived in the mail. 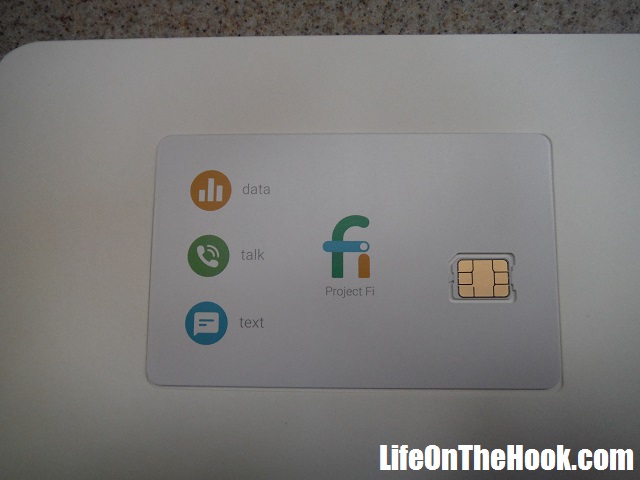 The instructions said that after plugging in the new SIM, I could use data over WiFi immediately, but it could take up to 24 hours for talk and text to resume working, as my number had to be switched from my old carrier (Verizon) to Project Fi. Concerned about being out of touch for so long (we have a lot of things going on at the moment as we get ready to depart), I waited until early on a Saturday morning to swap my Verizon SIM card with my new Project Fi card. Well, they might have issued an ominous warning, but it actually only took about 90 seconds for my number to port and a cheerful “Your phone is now available for use on Project Fi!” message to appear on my screen.

So far, I don’t see any difference in call quality, which is naturally a good thing. The Project Fi app that installed on my phone is very informative, showing me everything I’d ever want to know about my account, billing, data usage, and customer service and technical support. And I even now have the visual voice mail (for no extra charge) that Verizon was always trying to sell me as a $2.99 a month upgrade.

So what ultimately caused me to make the switch after 18 years with Verizon? The $10 per day per device access fee and $1.79 per minute international roaming rate that Verizon charges for international calling. It’s absolutely absurd to think of paying $10,000 annual phone bills, and I didn’t really want us to have to keep buying local SIM cards and changing phone numbers every time we run a new courtesy flag up the mast. With Project Fi, we can keep the same phone number for all our international travel with no additional fees, and calling rates to the US that average 20 cents a minute. Check back in a few months for a review on how it’s working!

I just wish I knew how they came up with the name Project Fi. As far as we’re concerned, it should be Project Awesome 🙂