I once mentioned in a previous post the old adage that if you want to make God laugh, tell him your plans.  Well, He’s been having a pretty good chuckle lately. If you’ve been a follower of this blog, you may have noticed that we’ve been pretty quite for a while now. Trust me, it’s not for lack of things to talk about. We’ve simply been overwhelmed. Not since that day almost 16 months ago when our realtor called and told us we had three weeks to move out of our home of 18 years, as detailed in A Tempest Unleashed, have we been spread this thin.

We’ve known for quite a while that this month, our final one before departing for our Life On The Hook™, was going to be challenging. But we had over a year to put a plan together, and we felt we were ready to execute it.  Rhonda’s last day at work was February 29th, and I had picked up fresh mint and limes to make celebratory Mojitos once she returned to Eagle Too after her final day at the office. We planned to hit the ground running the next day and begin implementing our plan, with the goal of being ready to depart for points south the first week of April. First on the agenda—detail Rhonda’s car and get it listed on Craigslist.

I never had a chance to make the Mojitos. Less than five minutes after leaving her office for the final time, Rhonda’s car broke down. I thought when I saw her name on my caller ID that she was calling to share her feelings about her final drive home from work. Instead, it was a call for help. So instead of dropping her car off to be cleaned, we were having it towed to the repair shop. 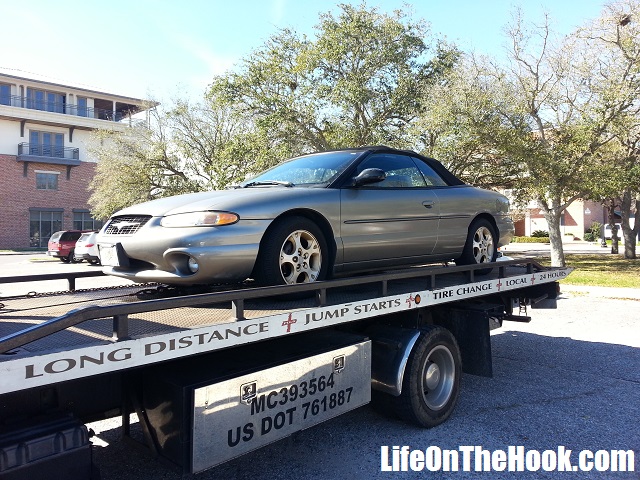 It turned out to be a failed distributor. The good news is that we had replaced it once before, and the repair shop warrantied the part. The bad news is that it took them over a week to get the car back to us. And suddenly we’re ten days behind schedule.

Then there was our mattress. We knew we wanted to have a new bed made for our aft cabin prior to shoving off. It’s our “master bedroom,” the place where we always sleep. We learned when we previously had a new V berth mattress made that the foam and fabric shop could take up to a month to finish a project because of how busy they were. Trying to avoid having to do without our bed for several weeks, we scheduled the job a month in advance to hold a place in their schedule so that they wouldn’t need more than three or four days to complete the job.

Just as we were scheduled to drop off the mattress, the owner of the shop suffered an attack of appendicitis and ended up in surgery. It’s the type of business where nothing gets done when the owner isn’t there. They’ve had our bed for two weeks now, and at this point we have no idea when we might get it back. We’re getting pretty damn tired of sleeping on a 2″ mattress topper on a plywood deck. And the clock keeps ticking toward April 1st.

And then there are our eyeglasses. Rhonda and I wanted to get new prescriptions and update our glasses before leaving for the islands. We purposely put it off until the last month so the prescriptions would be fresh. It’s never taken more than a week to get a new pair of glasses made. Until now. Somehow, the ophthalmologist hosed up my first refraction, and when I got the glasses a week later, I couldn’t see. Another eye exam, another prescription, another set of glasses. Almost three weeks later, finally having a pair I’m happy with, I took the prescription to another shop to have new lens made for my RayBan sunglasses. “No problem,” they told me. “We’ll order the lenses, they’ll be in next week, and we’ll call you to bring in your old sunglasses so we can put in the new lenses. Shouldn’t take more than an hour.”

The first pair of lenses arrived from the factory defective. Another set was ordered. Another week goes by, and the second set of lenses arrives. They’re fine, except for the fact that instead of being gray tinted and polarized as I had ordered, they’re clear and non-polarized. “Not going to make very good sunglasses,” I told the optometrist (along with a few more colorful words). A third set of lenses gets ordered. And once again, something that was supposed to take a week took two and a half.

So we’re coping with the frustration of dealing with all the unexpected delays that are beyond our control and appear designed to frustrate our carefully laid plans. while making a final push to bring onboard all the gear that we chose not to purchase or have to find a place to stow until the time to departure grew short. Ordering charts, stockpiling guidebooks, putting together our final Defender order. Clearing out cold weather gear and starting our final provisioning. Sorting through personal papers. The boat hasn’t been this cluttered and disheveled since we first moved onboard.

And then we walk to the Post Office to pick up our mail, and I find I have a jury summons. For the 4th of April. And I just shake my head and say, “Seriously? Now you’re just messing with us!”

4 thoughts on “OK, Now You’re Just Messing With Us”