We’ve had some questions from readers about the details of our whisker pole installation, so I thought I’d provide a few pictures. The first thing you have to decide is whether or not you intend to fly a spinnaker. If so, then you’ll need a much longer and stouter pole than what we’ve used. We have no intention of flying a spinnaker, as I believe that a spinnaker’s purpose on a two-person cruising boat is to turn what would otherwise be a relaxing downwind sail into a terrifying foredeck clusterf&$@. We just wanted to pole out our small 100% jib. As I mentioned in our post Becoming More Gentlemanly, to do that you’ll want a smaller pole than the one Forespar recommends. The 10-18 is the longest that will work. Any longer and it will be very difficult to dip the pole to clear the forestay when changing tacks.

Anyone who’s been reading for a while knows that we’re big DIYers. But this was one case where I’m glad we paid for professional support. Our riggers brought their offshore racing experience to bear and installed things in a way different from how I would have done it. But once they explained their reasoning, I’m glad they did it their way.

For example, we wanted to store the pole up the mast, and I originally asked them to mount everything on the mast to secure the pole when stored. They recommended we use a deck chock instead. 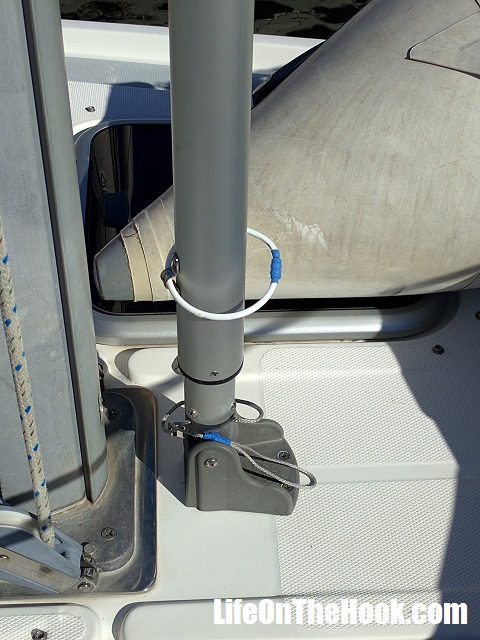 The reason? If we suffered a rig failure and lost the mast overboard, the whisker pole would go with it if it was stored on the mast. By clipping one end to a deck chock, there’s a better chance some or all of it will stay onboard for use as an emergency spar.

Next, I would have put the cheek blocks for the car control line above and below the T track. They put them off to the side. 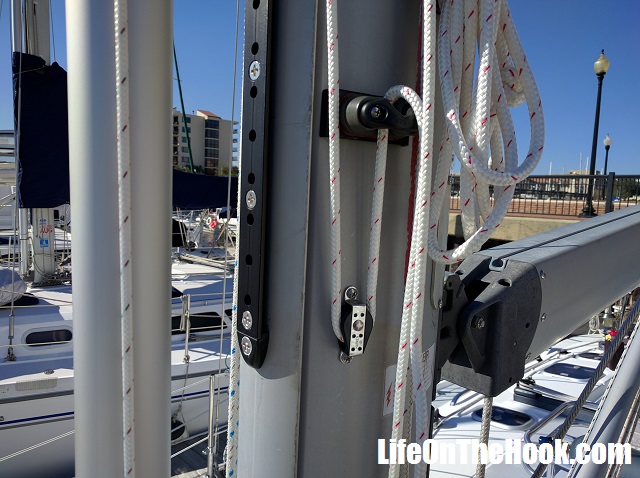 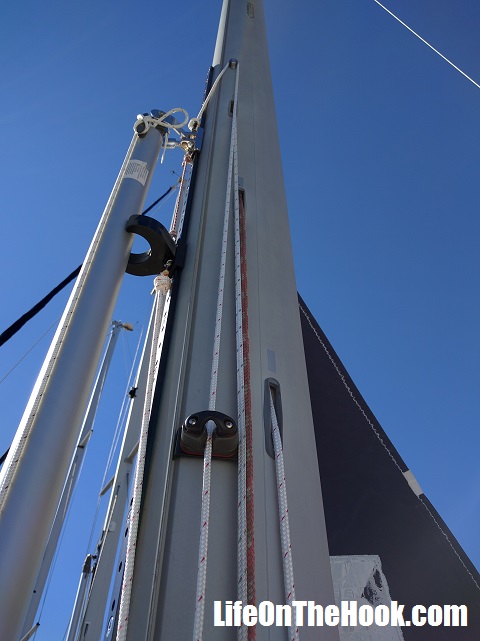 The reason is so that as the track cars get close to the top or bottom of the T track, the pull becomes more sideways, preventing you from pulling the cars off the track by breaking one of the end caps. I would have never thought of that.

The track is an 8 foot section mounted 45″ above the deck. This gives enough room at the top to allow us to raise the pole enough to clear the dinghy, which we usually keep on the foredeck. When the pole is set, it rides right about in the middle of the track.

Notice the way the storage car contacts the pole. 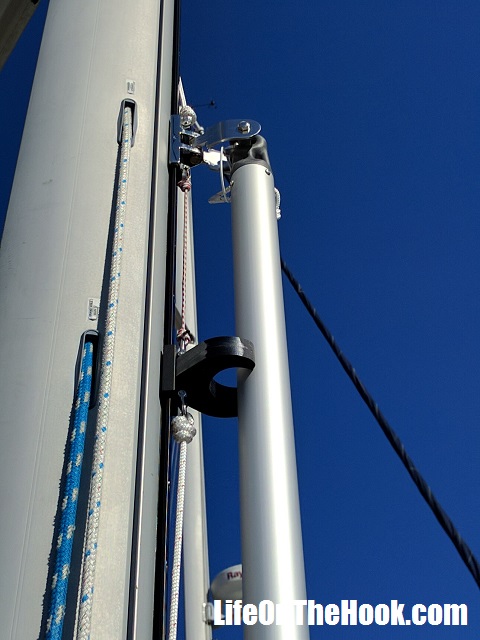 This looked wrong to me. I expected the pole to snap into the storage chock, which would require some kind of shim behind it to extend its reach. But I contacted Forespar, and they told me that this is how it is supposed to work. I will say that we’ve had several days of winds gusting to near 30 knots, and there hasn’t been a single rattle from this installation.

We hope some of you find this useful!