With our departure date rapidly nearing, things have gotten crazy busy onboard Eagle Too. So busy that I haven’t had the time to sit down and draft a proper post in quite a while. But we recently solved a problem that I think will interest anyone with a Z-Spar furling mast, so I wanted to take a moment to share our experience in case there’s someone else out there who may have encountered the same issue. We call it the story of the stubborn swivel.

We recently received our main and jib back from their Sail Care spa vacation, and they looked mahvalous after their sauna, deep tissue massage, and a couple of minor procedures to peel a few years away (which we obviously don’t discuss when in polite company. Ahem.) On the first calm day after their return, we planned to bend on the sails and turn Eagle Too back into a proper sailboat. While she’d been a pretty good sport about it, we could tell she just wasn’t in her element having to behave as a power boat during the absence of her primary motive power.

So it’s a mild, calm day and I invite my brother over to assist with the sails as it’s a two person job and Rhonda is still heading to work for a few more weeks. The jib goes up without a hitch and is quickly back on the forestay where it belongs. But the mainsail fights us tooth and nail. It has to be raised in a manner similar to a furling jib—one person at the mast feeding the luff boltrope into the furler foil inside the mast while the other one winches it up. Now the sail came down pretty easily a month or so ago, and I wasn’t anticipating any problems putting it back up. So I was really surprised by the amount of work it was taking to hoist the sail. I mean, give it all you’ve got, almost throw your back out, have to stop to catch your breath every few cranks of the winch, work. Something was just not right. But I went into denial mode, telling myself “It’s all right, we just need to get it up and then it won’t need to be touched for a year or two and everything will be fine.”

But a foot short of the top, the sail dug in and just quit moving. I could pull it back down, but when we raised it again it would keep stopping just short of the top. I couldn’t get the luff tight, which means there’s no way the sail would roll onto the furler. So we tried brute-forcing it by cranking the halyard so tight that you could have probably plucked out a pretty good rendition of Stairway To Heaven on it and the winch started noticeably flexing the deck. Still nothing. So we were forced to admit defeat and take the sail back down.

I did some troubleshooting, I lubricated some things, and I tied a downhaul to the head swivel and ran it up and down the mast without the sail. It would bind up at the spreaders and at the infamous one-foot-short-of-the-top spot, but I could pull it through and get it all the way to the top of the mast. So a few days later, Rhonda and I tried to put the sail up again. But we encountered the same results. It just wouldn’t go that last foot.

Since I already had our riggers working on installing our new whiskerpole, I asked them to see if they could figure it out. It took them a few days and quite a bit of head scratching, but here’s what they finally determined.

The main halyard is attached to the top of the swivel, and you attach the head of the sail to the bottom. When you raise the sail, the swivel rides up the furler foil inside the mast. The body of the swivel is kept aligned (not allowed to rotate in the mast) by a nylon (or possibly Delrin, I’m not sure) pad that rides in a channel on the inside of the mast. It is screwed to the body of the swivel with two countersunk flat head machine screws. I’ve called out the part on the Z-Spar parts diagram below so you can see what I’m talking about. 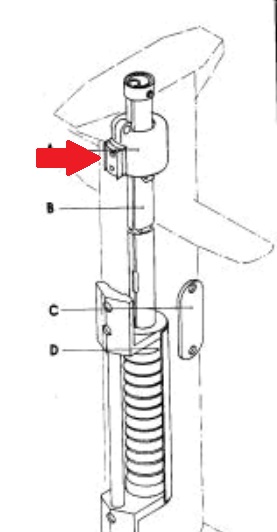 I tried to take a picture of it, and as you can see, it’s not really visible from outside the mast. It’s the vertical black piece just below the shackle. 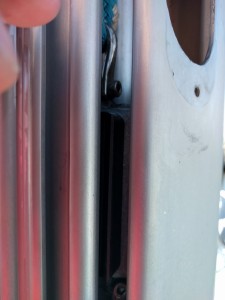 I’m not sure why he thought to do it, because he said he’d never seen this problem before, but our rigger finally took a screwdriver and pried open the slot in the mast so that he could make enough room to release the pad from the slot it rides in and rotate it around to view the fasteners. And he found that one of the screws holding the pad onto the swivel had backed itself out about three or four turns. It was supposed to be countersunk flush with the surface of the pad, but instead it was sticking out a few millimeters, and the edge of the screw head was dragging on the inside of the mast. It was basically acting like a brake shoe, fighting our attempts to raise the sail. That explained the fine metal shavings we were finding inside the mast! And there was apparently some sort of ridge or bump inside the mast close to the top that the screw caught on and wouldn’t allow us to fully raise the sail.

Such a big problem caused by such a small thing. Backing out the screws and reseating them with some threadlock cured the issue, and the sail then went up with no issues.

So we just wanted to share our experience, because this mast system was used on a lot of boats built in the mid-to-late 90’s. We hope if you’re having a similar problem, a Google search will lead you here, and possibly save you some headaches.

One thought on “The Story Of The Stubborn Swivel”