In my post Disappointing Dinghy Durability, I expressed my disappointment at the air deck floor giving out in our dinghy after only four years. Little did I know that we were only in act one of this little drama. For only two months after the $400 replacement air deck arrived, it too started leaking. Color me unimpressed.

Defender wouldn’t replace the second air deck, because I had used it for two months. It had to to be shipped to a Mercury authorized repair center for evaluation. They gave me the name of the closest one.  So off it went to Solution One Maritime, in Tampa. Who promptly  called me to ask why I was sending them my air deck, since I hadn’t bought the boat from them. Now I might have understood their position if I hadn’t already called them to speak about my floor and get the right shipping address. I pretty thoroughly explained at that time that I had bought it from Defender, and when I made a warranty claim on the new air deck, Defender called Mercury for instructions, and were told to tell me to ship it to Solution One Maritime. One would think that if they were going to have any concerns about the whole thing, this would have been a good time to bring it up. But noooooo, they just said “Fine, send it to us and we’ll take a look at it.”

Fortunately, after much phone tag and the involvement of Mercury, Solution One looked at the air deck, determined it was defective, and sent me a new one for free. It’s currently sitting on deck undergoing what we called a “drop test” in the Navy. That’s where you pressurize a device or system and then monitor it for a period of time to see if it will maintain pressure. In other words, a leak check. 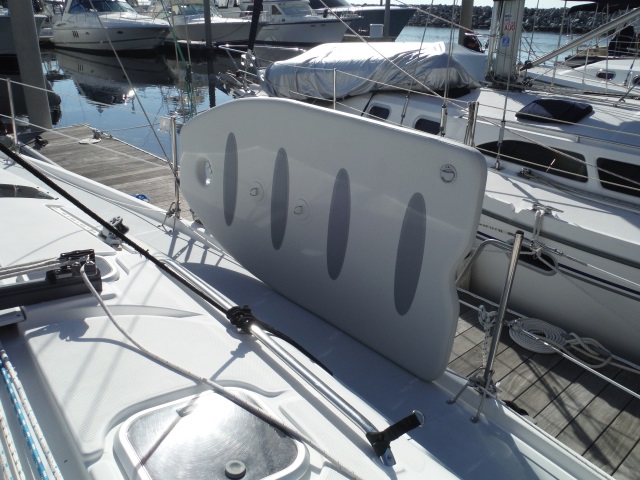 Two things that I learned as a result of this process. First, the air deck came with a 12 month warranty, so naturally it was covered when it started leaking after only two months. But when I asked if my replacement air deck came with its own 12 month warranty, I was told no, it is only covered by the remainder of the original warranty. Since it’s winter now (recent mild weather notwithstanding) and the dinghy won’t get any use before next March or April, that’s why I felt the need to do the drop test before packing it away till next Spring. Just to be sure.

The other thing was an observation by the folks at Solution One that this isn’t supposed to happen. They claimed that Mercury air decks usually last 10 years, and the odds were 50 to 1 that mine would develop a leak in only four years. And having another one leak in just two months? Well, they quoted me 500 to 1 odds of that happening. Lucky me. As for the one I just received, well, they quoted me 5,000 to 1 odds that it will also leak.

So if this one is deflated come tomorrow morning, I’m making a stop at the nearest convenience store to pick up some PowerBall tickets. Because I’m apparently on a hot streak, beating some pretty steep odds at the moment.