Rhonda: “I still have five days of vacation left this year. How do you think I should use them?”

Robert: “It’s getting too late in the season to spend a week out sailing. Maybe we could take a cruise?”

Rhonda: “How much would that cost?

Rhonda: “That’s a lot of money to spend when we still need things for the boat.”

Robert: “Yeah, I suppose it is. Well, I’ve been wanting to make a Disney run again. Care to spend a few days in Orlando?”

Robert: “Well, I think we’d be looking at about $400 a day with the room, park tickets and meals.”

Robert: “I suppose so. I guess for the cost of three or four days at the parks, we could just about pay for the dive gear we want.”

Rhonda: “So what do you want me to do with my five days?”

Robert: “Well, you have been telling  your Aunt Evelyn in Charleston that we’d come visit her someday.”

Rhonda: “And from there we could drive up to North Carolina and visit the rest of my family. I’m sure they’d put us up, which would save a bunch of money. Probably feed us, too.”

Robert: “And I suppose we could swing through Jacksonville on the way to Charleston, and that way we could pick up the dive gear I’ve been wanting.”

And so Rhonda’s Family Farewell Tour was born. Her father was one of ten children, which means she has a lot of aunts and uncles. And they were all born in the 1920’s and 30’s, which means they’re getting pretty darned old. And since our plan is to embark on a five year mission seeking out the absolute best Caribbean beach bar on the planet, well, the odds are fairly high that many of them may no longer be with us upon our anticipated return. So we packed our bags, rented a car (we always prefer to put road trip miles on someone else’s vehicle rather than our own), and hit the road, headed northeast.

It was definitely a trip that was long overdue. Even though Rhonda and I have been married for 36 years, I’d never met most of these people, and it was nice to make their acquaintance. One thing I learned is that there are certainly some good genes on Rhonda’s side of the family. Even though they are all in their 80’s and 90’s, they were all active, alert and wittily charming in that down-home southern sort of way.

Between stops to visit extended family, I was able to indulge my inner history buff. Charleston is where the American Civil War basically began, and Fort Sumter has always been on my places-to-see-someday list.

As a former submarine sailor, a visit to the CSS Hunley, the first combat submarine to sink an enemy vessel in wartime, was another must-see on my list. Recently recovered from its resting place on the bottom of Charleston harbor, where it was lost with all hands after sinking the Union blockade ship USS Housatonic in 1864, the vessel is undergoing preservation at a facility at the old Charleston Navy Yard. 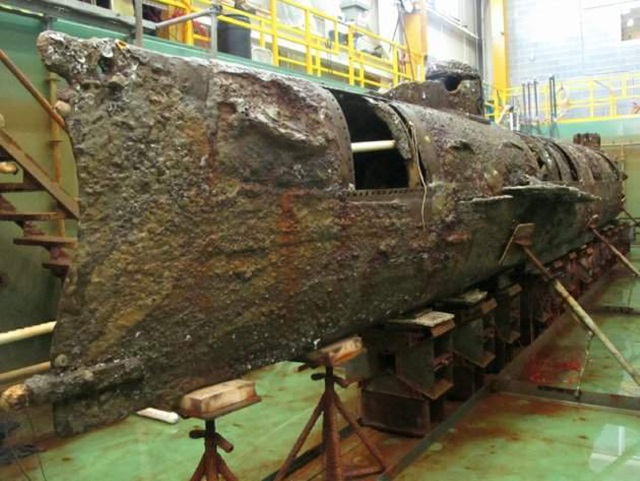 Consisting basically of an adapted 42 inch wide steam boiler, the vessel’s propulsion was provided by seven men straining at a handcrank, while the eighth man steered and controlled the depth. 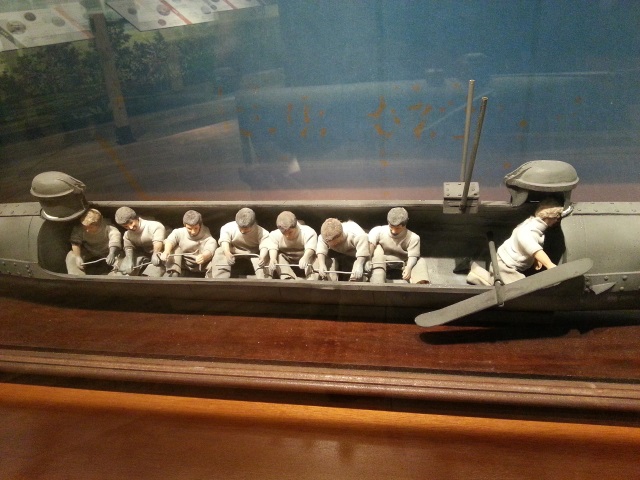 Imagine sitting here for hours on end, cranking for all you’re worth along with six other men, the only light being that of a single candle. (This mockup is actually about 25% larger than the real Hunley) 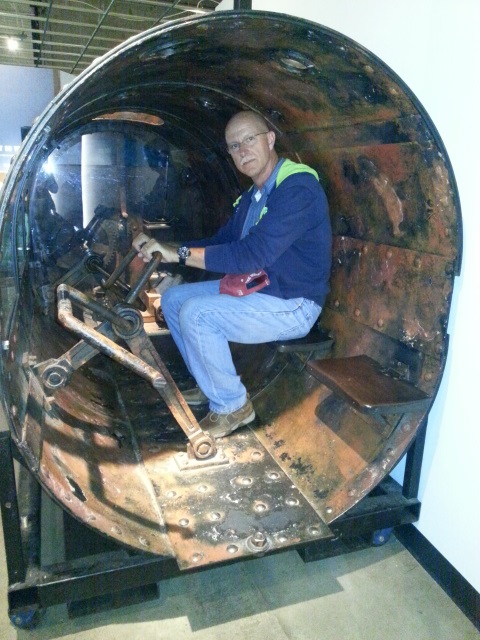 A truly amazing thing to consider is that it was only 80 years, or the span of a single human life, that separated that primitive weapon from this scene, from the engine room of the WWII era submarine USS Clamagore at the nearby Patriot’s Point Naval and Maritime Museum. 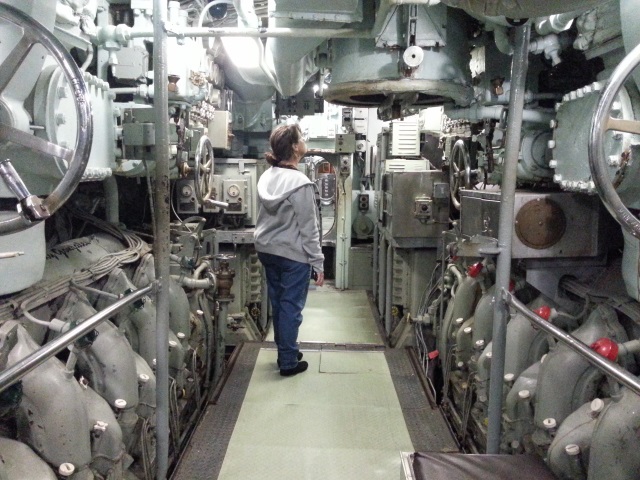 While at Patriot’s Point, we toured the vessels on display:

and came across this memorial, which I didn’t even know existed. It’s dedicated to the men who served on submarines during the Cold War and their families, 1947–1989. So for my submarine service brothers out there:

After a week of visiting extended family and taking in the historical sights, it was time to return home. Since we still had a couple of days before Rhonda had to return to work, we stopped off in Atlanta for a day, where we found Pensacola’s wayward observation wheel. For almost a year, this wheel had graced our beach in Pensacola: 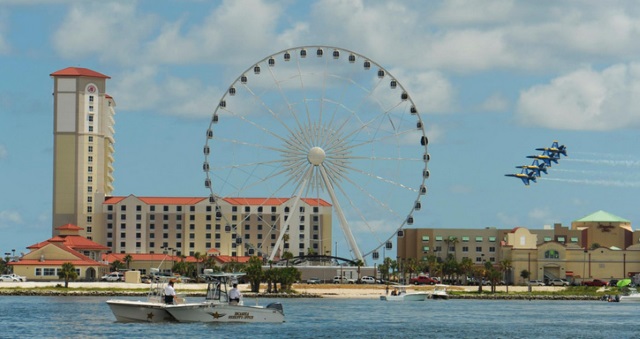 before abandoning us and moving north to Olympic Centennial Park in downtown Atlanta. 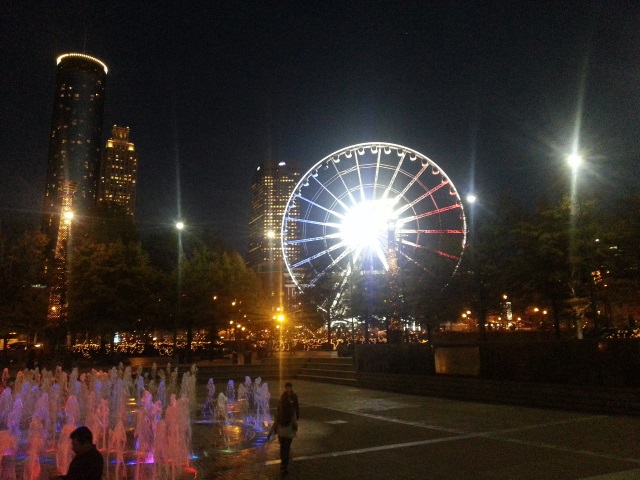 I guess we forgive it for giving up on us and moving on, but personally, I think it looked a lot better on the beach.

Concluding our Summer Of Taking It All In, (since it is very definitely not summer here anymore) we visited the Georgia Aquarium, to which my brother had given us some tickets. 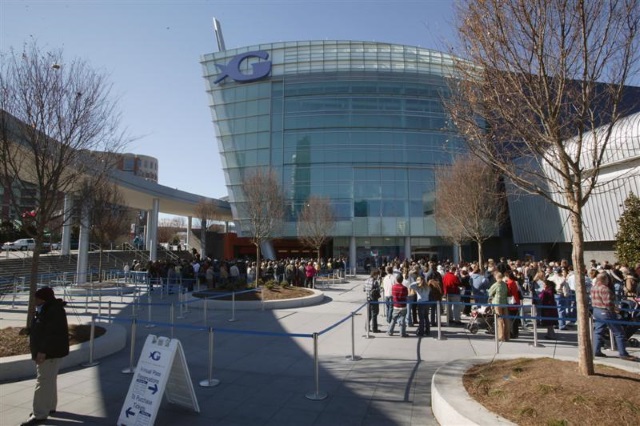 It was an impressive facility, supposedly the largest aquarium in the western hemisphere.

It’s breathtaking to stand in front of a 28 foot tall, 63 foot wide viewing window gazing into a six million gallon tank, watching whale sharks and enormous mantas swim majestically about. It’s a stop well worth your time if you’re ever in Atlanta. Allow at least four hours to take it all in!

Since we still had a little time, and it was right next door, we stopped in to visit The World of Coca-Cola, because I basically wanted to see how you could turn a soft drink into a major attraction. It actually turned out to be a fun two-to-three hour diversion, outlining the history of how one man’s drink formula grew into a worldwide multi-billion-dollar business.

Part of the self-guided tour included a look at what is supposed to be the vault where the only written copy of the formula for Coca-Cola is kept: 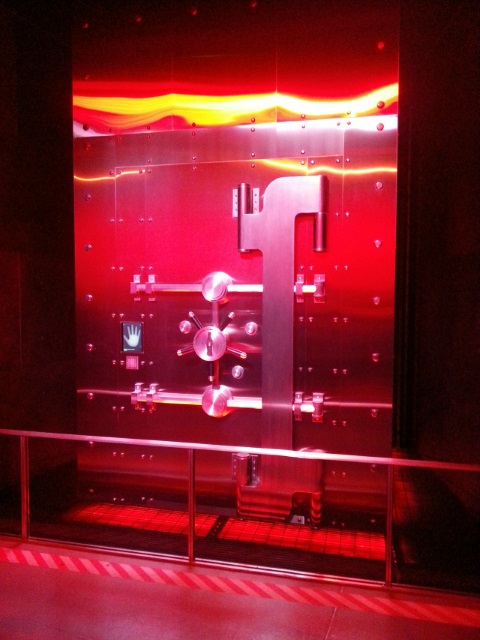 From there, the tour concludes in the tasting room, where you can try samples of over 100 beverages from around the world that are produced by the Coca-Cola company. Some were quite yummy. Some tasted like stale bilge water. All represent the unique taste preferences of the particular cultures for which they are produced. I’m just glad we escaped before descending into a diabetic coma.

It was a good trip, and one I’m glad we made the time to take. But with our time winding up and Thanksgiving right around the corner, we hit the highway for the five hour drive back to Pensacola. We now have the holidays to plan and prepare for (our first holiday season as full-time liveaboards), and then we’ll have one more big push to take care of the last few things on Eagle Too that we believe she still needs to be ready to transport us to wherever we wish to go. Stay tuned!

2 thoughts on “The Family Farewell Tour”