One of the challenges of a life afloat is dealing with what is known as a Marine Sanitation Device (MSD), aka The Head. Nothing can ruin a crew’s mood better or faster than a fluky flusher.  Now you’d think that with thousands of years of maritime history behind us, the human race would have figured out a bulletproof way to take care of business onboard. Unfortunately, the most reliable and trouble-free method we’ve come up with in all those centuries of traveling the world’s oceans is something along these lines: 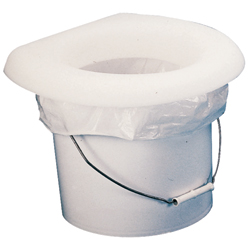 Affordable, robust, reliable, and with repair parts widely available. Unfortunately, they have a bit of a problem containing undesirable odors, or anything else for that matter when the boat starts heeling in a stiff breeze. So while there are indeed sailors out there who rely on one of these for their daily duty, it’s not generally considered an acceptable solution for the modern mariner.

I’m afraid, however, that the most commonly utilized ‘improvement’ on the lowly bucket is this little jewel, which IMHO is only marginally better: 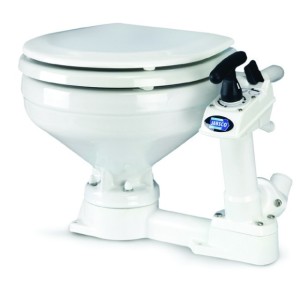 The ubiquitous Jabsco toilet. From entry level daysailors to high end cruisers, this has been the go-to MSD for most boat manufacturers due to its low cost. But while it shares with the bucket the characteristics of affordability and wide availability of repair parts, it falls way short on robustness and reliability. That’s because the primary, indeed the sole concern of the crack engineering team that designed this device was to come up with the cheapest possible solution to the problem at hand. But the problem probably isn’t the one you’re thinking of.  The designer’s focus wasn’t on the efficient handling of human waste. No, the overriding design consideration for the Jabsco toilet was to “build the cheapest device for handling waste that can (barely) survive past the manufacturer’s warranty period.”

We have years of experience with a Jabsco marine toilet. Our last boat had one. And over that time, I think we replaced almost every part on it. Some parts twice, and a few, three or more. And that was OK at the time, because we only used the boat occasionally, and if something broke (“Look honey, the toilet is gurgling again”), we could just not go sailing until we fixed it.

When we bought Eagle Too, she naturally came with the same Jabsco toilet. But we knew we were planning to move onboard, and eventually depart on our Life On The Hook™. And we didn’t want the annoyance and aggravation of having to constantly maintain a cheap crapper. So during the mini-refit we did last December to make the boat a more comfortable home, we installed a new marine toilet: 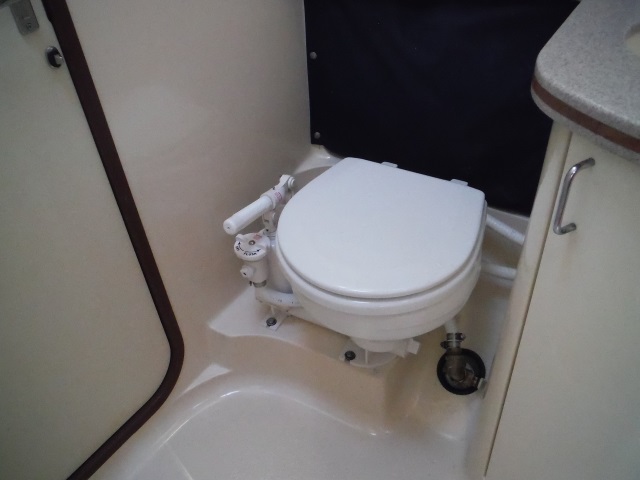 It’s a Raritan PHC. And it’s probably one of the single best upgrades we’ve installed. This thing just works, works well, and works every time. With a weekly tablespoon of vegetable oil and an occasional dose of vinegar (I’ve heard this elixir referred to as “head dressing” 🙂 ), it has handled everything we’ve thrown at it in over ten months of constant use. We finally had to replace the first part last week, the joker valve, which if you have any MSD experience you know is a consumable item that gets replaced more or less annually.

So this is actually a gear review posing as an anecdote. I just wanted to point out that if you’re tired of having to disassemble, unclog, clean, and grease a Jabsco toilet while feeding it a constant diet of flapper valves, O rings and repair parts, then I think this is an upgrade you should consider. Because it really takes care of business. And for that, it gets the LOTH Seal of Approval.