I knew that someday I would write this post. It’s been long enough now that I think I can actually capture these thoughts and not be overwhelmed by the feelings that result. I decided to finally address this subject because I’ve seen several discussions lately on other blogs I follow that talk about the costs of cruising. They always focus entirely on the dollars and cents of it all. But there can be other costs to embracing this life that I seldom if ever see mentioned. So for those of you considering embarking on your own cruising adventure, here’s one cost some of you may have to incur that you might want to think about and prepare for.

I guess you could say Tiger was a rescue kitty. We met him one night at the home of friends. Their daughter had found him, hungry and trembling, hiding under a car in the street in front of their house. He couldn’t have been more than six or eight weeks old, and practically fit in the palm of my hand. We all just assumed that someone had abandoned the poor thing in the neighborhood to either be loved or lost.

Our family cat had recently vanished. I can’t say we really missed him terribly. His name was Sneaker, and he just wasn’t much into people. You have no way of telling what they’ll turn out to be when they’re just tiny balls of fluff, whether this will be a cat that would enjoy fooling around with the kids, or one that just bitches and scratches and  acts like the only reason for you to exist is to feed him regularly. Unfortunately, Sneaker had turned out to be more the latter than the former. We don’t really know what happened to  him. He just didn’t come home one day. It’s possible he ran afoul of one of the coyotes or owls or hawks in the neighborhood, or sometimes cats just do that—wander off and never come back.

So there we were, not really looking for another cat, when this little guy showed up, frightened and hungry. Our friends already had a full complement of pets—several dogs and cats, and I think their son even had a snake. And we had no pets and this empty cat dish that wasn’t being used. None of us could even consider putting him back out in the street or taking him to the animal shelter.

So Tiger joined the family. And he actually turned out to be a pretty darned good cat. He’d bring us mice and moles and the occasional cardinal or mockingbird, because that’s what cats do to show affection. He’d tolerate a pretty amazing amount of abuse from the kids. While he’d sometimes seek alone time in some hidden place to sleep away most of the day, he would also often follow us around or lay where he could keep an eye on us if we were outside working.  He knew early evening was Cocktail Time, and would almost always appear from wherever he had been when we sat down at our patio table to have  a day-ending adult beverage. And although he spent the majority of his time outside, he always, always came home again. 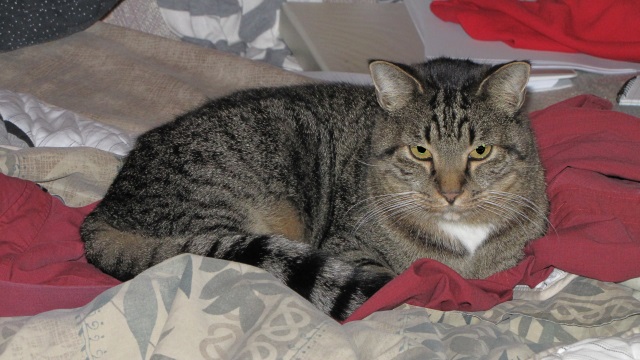 But the day came 14 years later when the kids were grown and gone, the house had been sold, and the movers were in the process of packing our remaining possessions off to storage. We were pursuing a crazy dream, embarking on this Life On The Hook™. Everything was falling into place. Everything except Tiger. We just couldn’t see how he could possibly adapt to this next phase of our lives. He’d spent 14 years as a free-range kittie, living as lord and master of our four acre property, which he regularly patrolled and defended. We thought it unlikely, unrealistic, indeed even cruel to try and force him to suddenly exist on a 37 foot boat at a marina in the heart of downtown Pensacola with all its people, dogs, and scary garbage trucks. And I should mention that Tiger hated litter boxes. Absolutely refused to use one unless he was about to burst and it was his only option. That’s one of the reasons we’d turn him out for the day when we both went to work. We were both still working when we first moved onboard, and we just couldn’t see leaving him on the dock every morning to let him wander the busy streets of downtown Pensacola.

Our boys couldn’t take him. One lived in an apartment that didn’t allow pets, and the other one already had a cat and couldn’t accept another. Oh, they loved Tiger a lot, but I think that somehow they just assumed that Mom and Dad would figure something out and it would all be fine, because usually we did and it was, no matter what the problem.

None of our relatives wanted him. None of our friends wanted him. None of the complete and total strangers who came to our yard sales wanted him. And since he was fourteen years old, even the animal rescue shelters all said he was just too old. They prefered to take in cats less than five years old, because they were adoptable. While the county animal shelter is a no-kill facility, we couldn’t bear the thought of him living his remaining years in a 2 foot square cage. We even briefly considered just leaving him behind, hoping that maybe our home’s new owners would take him in. But it was equally likely that they’d have their own pets already and he would end up starving alone in the woods.

Unfortunately, Tiger didn’t help the situation. Apparently in the year before this all played out, another cat owning family had moved somewhere close by. A family whose cat was younger and tougher than Tiger, and who routinely beat the living crap out of him. Three times we had him at the vet’s office having abscesses on his face drained and festering wounds fixed, we assume incurred in territorial fights. So even if we’d ask someone if they’d please consider giving Tiger a home, he really didn’t present his best appearance. He was a bit shredded up.

So the day finally came, the day I’d become increasingly resigned to. With the way that everything else just fell into place, I’d hoped against all odds that surely something would happen and Tiger would find a home. But it never came to pass. The sale was closed, the furniture was gone, and we were moving to the Homewood Suites until we could get Eagle Too out of the shipyard and back in the water. And so I had to perform that duty that husbands and fathers often have to do. Rhonda and I hugged Tiger, and petted him, and thanked him for the fourteen years of love and companionship he’d given us. And then while she went outside to compose herself, I put him in his carrier and took him to the veterinarian’s office to be put down. 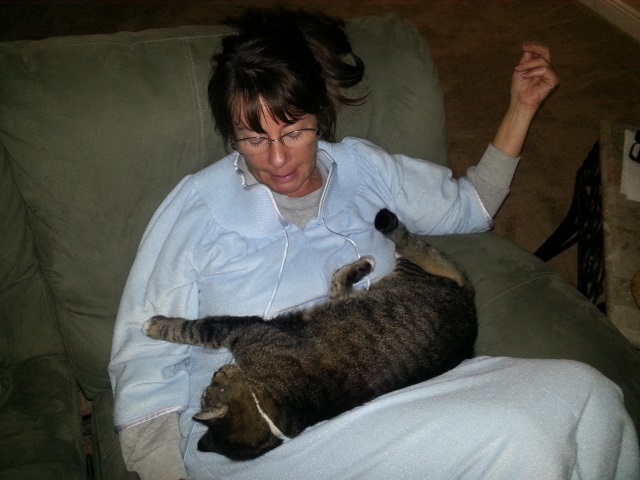 The last picture I can find of Tiger

It was a hard thing to do. Even now, almost a year later, I’ve had to take several breaks while writing this post. If circumstances had been different, maybe we’d have had other options. If he’d been younger, or more of an indoor cat, or even better able to tolerate a litter box, maybe we could have made it work. But we knew in our hearts that taking him from the only home he’d ever known, where he was free to roam over acres of fields and woodlands, and confine him to a 37 foot boat, would leave him miserable. I can’t imagine how he would have reacted the first time we threw off the lines and went for a sail. I know there are people who sail with cats onboard. We just couldn’t see Tiger adapting to that life. And so we did what we felt we had to do. But it was a cost that still takes a toll on us.

Was it worth the price we had to pay? Of course. Two people don’t make providing a home for a pet for the final two or three years of its life the focus of their lives. That would just be crazy. As I’ve said in several previous posts, you never know what the future may bring. Right now we have the family circumstances, the financial ability, and most importantly, the good health necessary to embark on a Life On The Hook™. If we’d sat around for three years waiting for Tiger to live out his time, who knows if any of those would have still been true.

But I can say with all my heart and soul that I wish it were a price that we had not had to pay. 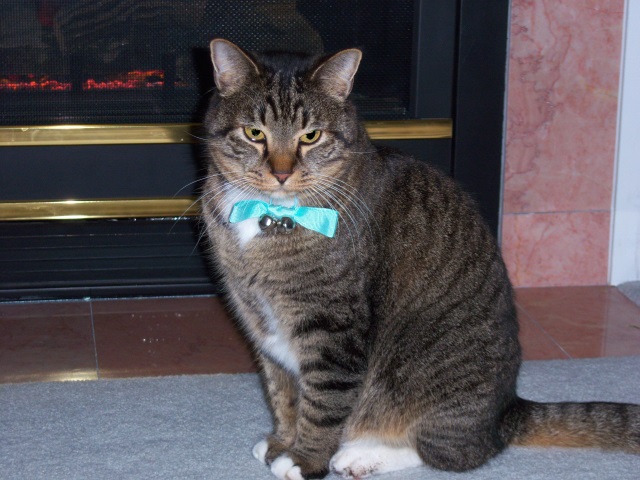 No, we’re not the type of people who dress up our animals. I just thought this would be funny, and Tiger was willing to put up with it for a few minutes.

2 thoughts on “A Hidden Cost Of Cruising”