It took almost a year, but I’m proud to say that we’ve finally achieved that rarest and most elusive state, the Holy Grail of onboard habitability—the bone dry bilge. So uncommon is this condition that I once believed it to be a myth, an unattainable level of maritime perfection that could be constantly strived for, but never truly achieved. But with persistence and determination (and, as always, the liberal application of  dollars from the cruising fund), we finally accomplished it, and you probably can too if you want it badly enough. 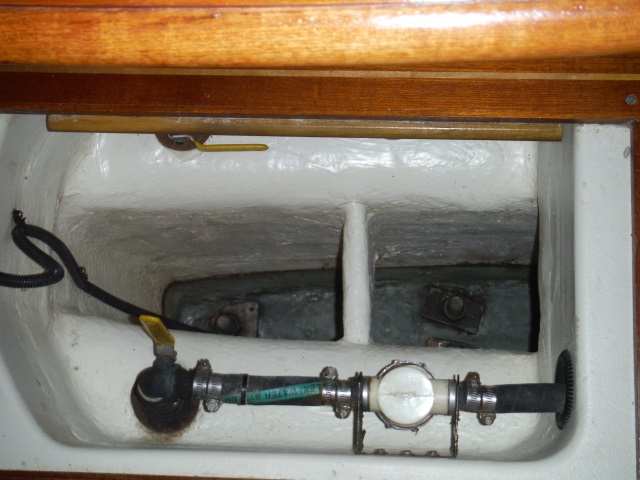 Why is a dry bilge important? For several reasons, I believe. First, as I described over a year ago in Oooh, That Smell, stagnant bilge water is a major source of odorous funk. We don’t like smelly boats, and we’re damn proud of the fact that over the past year, we believe we’ve successfully eliminated 95% of our onboard odeur. But it was always going to be a never ending battle unless we cured rather than just treated the sources of our smells. Replacing our permeated sanitation hoses made a huge difference. Upgrading the shower sump system helped a lot. And finding out what was constantly leaking water to the bilge and fixing it was another important part of our odor elimination strategy.

Second, it was a safety issue. It’s not the water outside the boat that sinks it, it’s the water within. The fact that there was always water in our bilge and the bilge pump would cycle on several times a day meant that the only thing keeping our boat afloat was our bilge pump. Now think about that for a moment. A boat with a value in the high-five-figures whose ability to continue floating depended entirely on the health and well-being of a $69 pump. We could vacuum our bilge dry, and a few days later, there would be six inches of water in it again and the bilge pump would start kicking on once more.  Just not a comfortable feeling. Like many (most?) boat owners, we lived in a continual state of slow motion sinking. Amazingly, most people seem to be perfectly OK with this. Us, not so much.

And then there’s the fact that keel bolts have been known to develop leaks over time. But if your bilge is constantly wet, you’ll never know. Before we take Eagle Too to the islands, I wanted to know that all was well with the keel and the bolts holding it on. And that meant we had to dry out the bilge and keep it that way.

And finally, we have plans to bring on 200 feet of chain for our new anchor rode, and I want to store the existing 100 feet somewhere onboard just in case it’s ever needed. The bilge would be a perfect spot, as it would put the 500 pounds of chain nice and low where the weight would increase rather than detract from our stability. But I really didn’t want to store it underwater. I’d prefer it stay dry to prevent it from rusting.

So here’s how we finally dried out the bilge. First, at our last haul out, we replaced our old packing-style shaft seal with a dripless model. 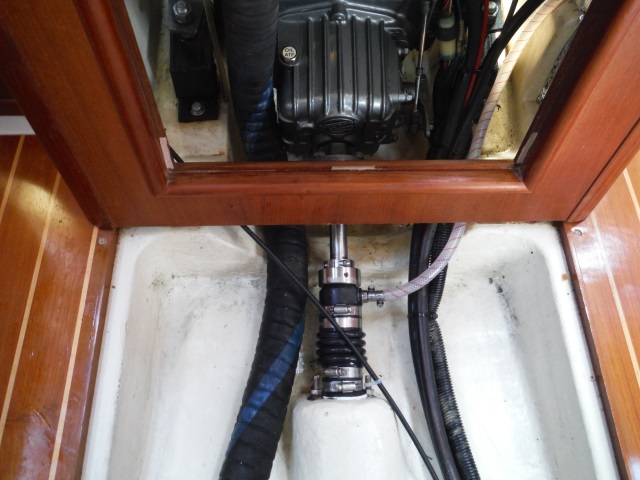 A shaft seal that relies on packing requires several drops a minute of leakage to keep the seal lubricated. Water that then finds its way to your bilge, where it sits and stagnates and becomes a bacterial theme park. The advantages of a dripless seal are, well, that they don’t drip. WIthout adding one of these, your quest for a dry bilge will be fruitless.

Please note in the picture above that the seal vent is on the right side of the unit. The installation instructions specifically say that the seal has to vent out the top, and not the side. But there isn’t enough room under the cabin sole to install it with the vent on top. So we did it this way, and it hasn’t been a problem. I just try and remember to feel the carbon rotor occasionally to make sure it’s not getting warm, which would indicate an air bubble had formed inside. If it ever did feel a little warm, all I’d have to do is push the seal back against the bellows for a moment to release a few drops of water and “burp” the seal.

Also, the installation instructions say that the vent line merely has to extend above the boat’s water line, and can be open. This would be a big mistake. We ran our vent line to an inexpensive radiator overflow bottle that we picked up at the auto parts store. 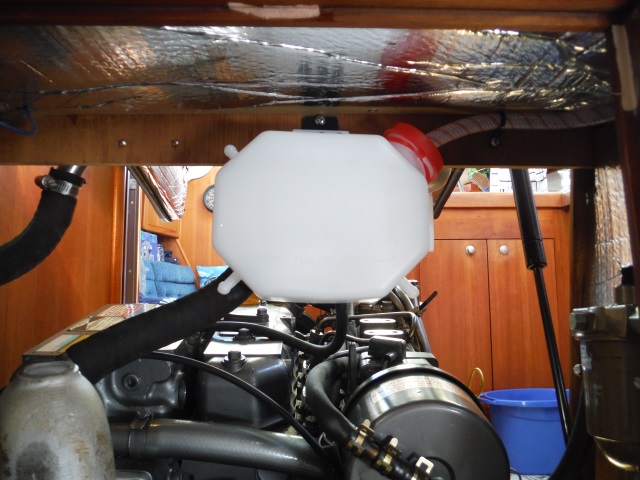 When you run the engine in reverse, we’ve learned that the prop wash pushes water up the seal’s vent line and into the reservoir. If we’d left the vent open to the air as the instructions directed, we’d have a little salt water fountain spraying on the engine whenever we backed the boat. We always back into our slip, and Rhonda usually empties about a half inch of water out of this reservoir after every underway.

Once we entered air conditioning season, the greatest source of water in the bilge was from the air conditioner’s condensate drain. It produced several gallons a day. At least it was fresh water. But it would still get stagnant and turn an ugly black color with the associated funky smell if we didn’t periodically dry and clean the bilge. Something had to be done. The something was this: 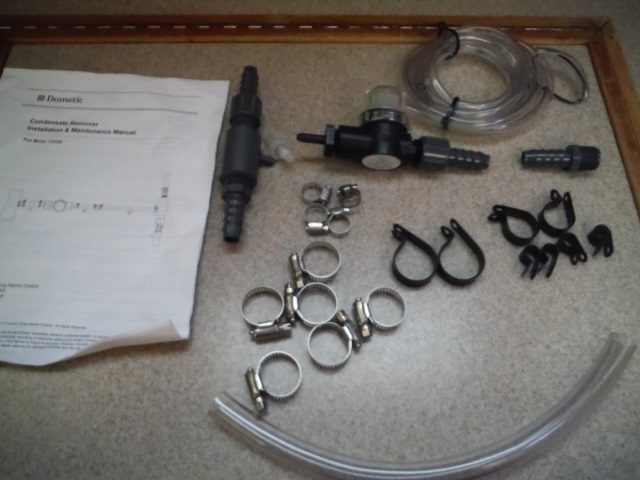 This is a kit made by Dometic that uses a small venturi installed in the air conditioning sea water cooling line to suck the condensate out of the unit’s drain pan and send it overboard. Here’s the inline filter and check valve: 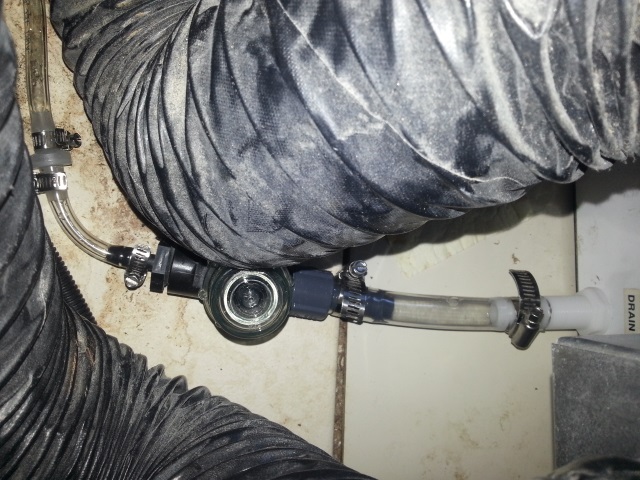 and the venturi unit installed in the seawater line. 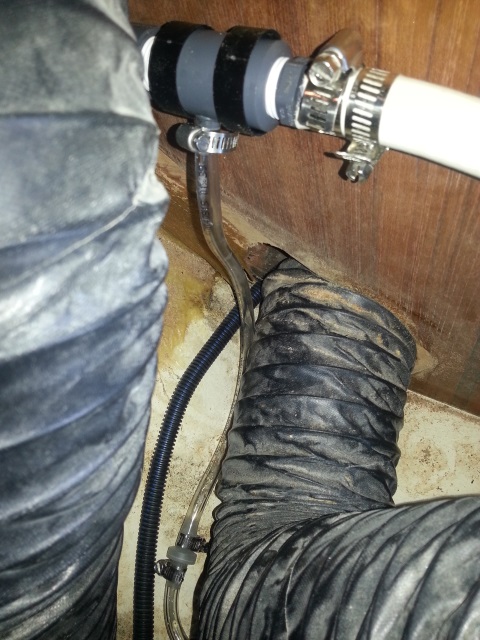 Here’s a little video of the unit working:

We’re now having to get used to the subtle sucking sound it makes whenever the air conditioned is running. Sort of like someone sucking a soda straw on an empty cup! But at least we can hear it’s working. Beware if the sucking ever stops, I suppose.

With the two biggest sources of water eliminated, we were down to just one last item—the refrigerator drain. Now we normally keep a rubber plug in the bottom of the refrigerator to avoid losing cold air to the bilge. 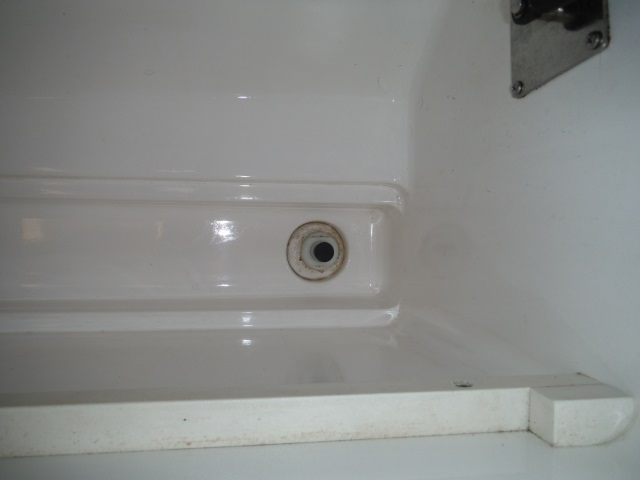 Whenever we defrost the freezer, a cup or two of water collects, and when I pull the plug, it drains to the bilge. But there’s a reason the sump box that the shower drains to has a couple of extra inputs. It’s so you can plumb in other lines that also need to be pumped overboard. 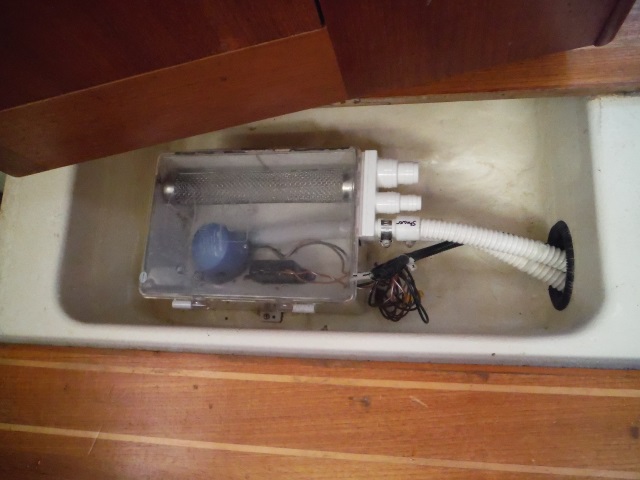 It only took about an hour (and a brief trip to West Marine) to reroute the refrigerator drain from the bilge to the shower sump. As an added bonus, I also got to drill another hole in the boat, which, if you’ve been following along, you know I consider the hallmark of any worthwhile boat project. 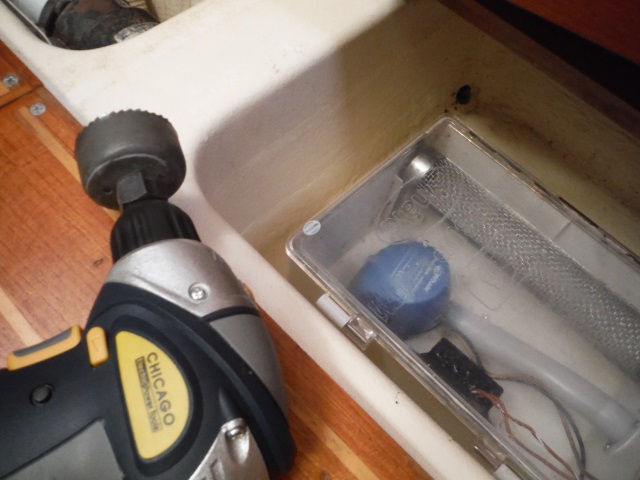 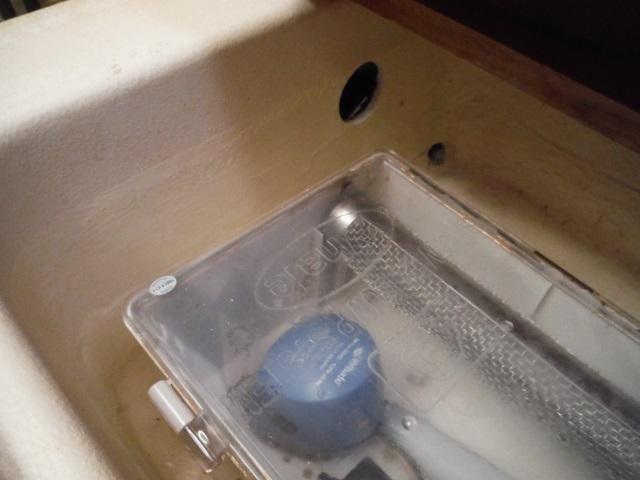 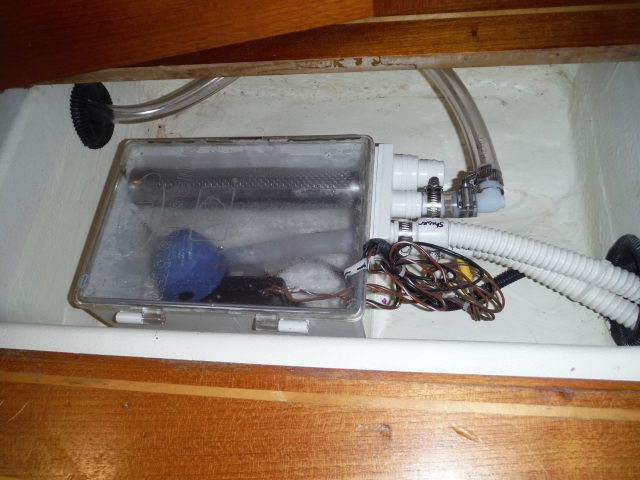 And that was it. It took a year to get around to it all, but our reward has been a bilge so dry we could use it for a paper towel and toilet paper locker!

Which I guess means our keel bolts are OK 🙂