Most people have a Someday plan. Someday they’ll do something, go somewhere, be something. Someday soon, hopefully. But not now. Because.

Life often sends people with Someday plans a message. A wake up call I guess you could say. The question is whether they listen or not.

I believe it was Wednesday when we got word that Tom had died. Brain cancer. We didn’t even know he was sick. We weren’t really friends, but we were friendly. The memorial was Friday at McGuires Irish Pub. He had worked there for a long time. The room was packed. There wasn’t a dry eye in sight when McGuires’s bagpipe band played Amazing Grace.

I assume Tom had Someday plans. I really don’t know, we’d never talked about it. But most people do. Fifty-eight is too young to pass on to whatever is next. It’s the age when many of us are saying to ourselves, “Someday soon. But not quite yet.”

My point is that it’s important for us to each remember not to wait too long for Someday. Because far too often, Someday never comes. Something else happens instead. Something totally unexpected, that puts Someday forever out of reach.

We’ve made our choice. We’re on our way. So tell me, when is your Someday? And what are you waiting for?

OK. On a lighter note, (because I really don’t want to leave you depressed and introspective), I’d like to mention again how much we’re enjoying learning about this town that we’ve lived in for a very long time, but haven’t really experienced in a significant way until moving onto our boat downtown. We thought we’d scoped out the weekend’s events, and had several on our calendar. There were the dragon boat races and the Corvette show, Casablanca showing at the Saenger theater, and the Seahawks season opener at our usual sports bar. But I was clueless when Rhonda came home Friday afternoon and asked, “What are the white balloons for?”

“White balloons? I don’t know what you’re talking about,” I replied.

Sticking my head up from down below, I could see she was right. There were indeed bunches of white balloons tied to every lamppost, street sign and park bench along the street next to the marina.

“Huh,” I said. “I have no idea. There weren’t there at lunchtime,” which was the last time I had been topside.

Later that evening, on our way back from Tom’s wake, the mystery of the white balloons was solved. DeLuna Plaza, at the foot of Palafox Street overlooking Pensacola Bay, was teeming with people. A huge crowd totally dressed from head to toe in white. There were rows of white linen covered tables, and the plaza was filled with the sound of a hundred conversations, laughter, and the clinking of champagne glasses. As we watched, it grew quiet, and then apparently on cue, everyone lit and held aloft a giant white sparkler. It was mesmerizing. I tried to take a picture. I wish it had turned out better. 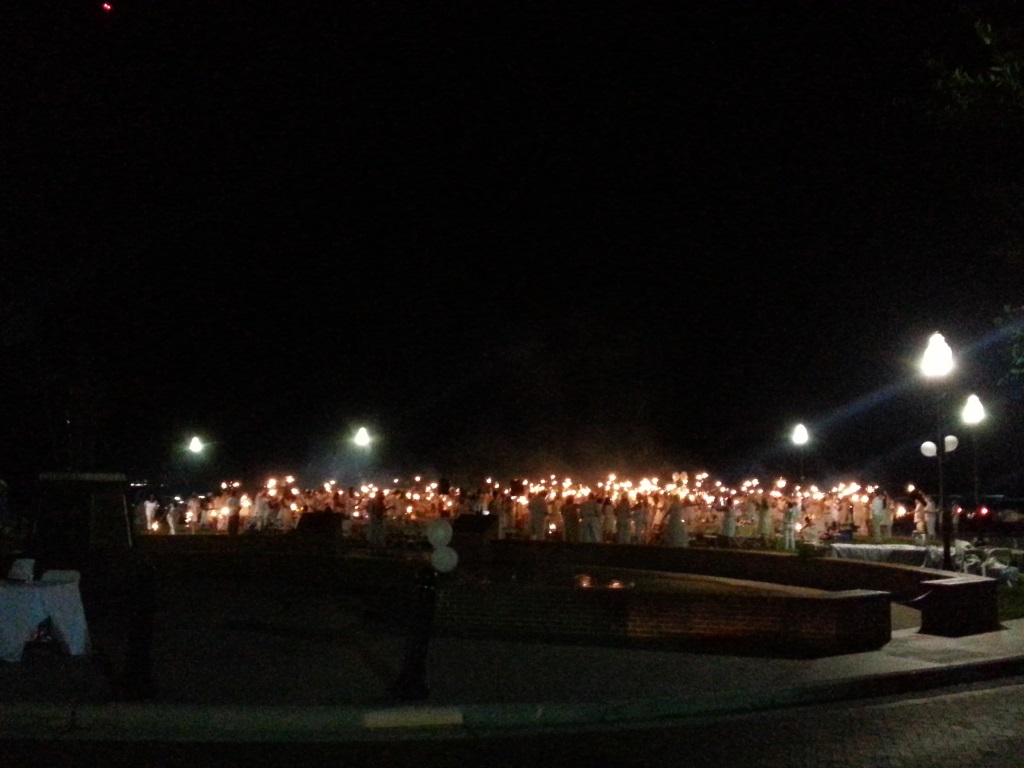 We had to know what was going on. We learned it was a flash mob event called An Evening In White. Originating in Paris, they’re now held all over the world. Apparently a sponsoring organization (in this case, the Junior League of Pensacola) plans the event as a charity fundraiser. Participants pay a fee ($30 pp in this case) to attend, but aren’t told the location of the event until noon the day of. Which is why we had no idea this was occurring right next to our marina, and explains the purpose of the mysterious white balloons. Google “Evening In White” to learn more. It’s an interesting story.

So late Sunday morning, as we’re walking the five blocks or so to the sports bar that reserves a section for our Seahawks fan group on game day, Rhonda noticed that the streets were eerily quiet. It was 11:30 on Sunday, but there were no cars on the streets. We soon noticed police cruisers blocking the major intersections. The roads were apparently closed for an event of some kind.

“Probably another race,” we said to each other. It seems there’s a 5K or fun run of some type every other weekend.

Well, we were partly right. It was a race. But not the kind we were expecting. 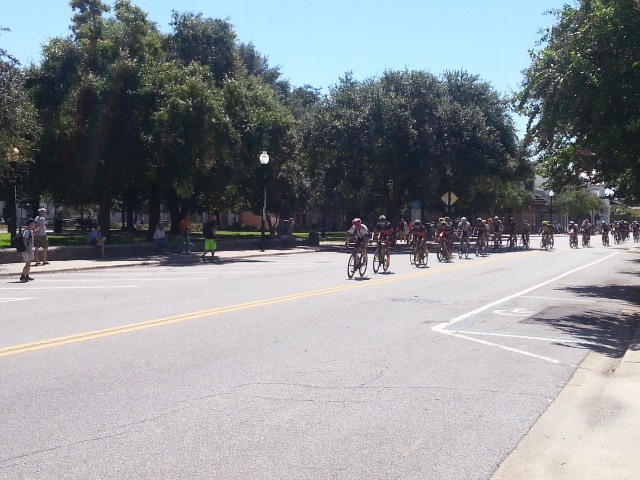 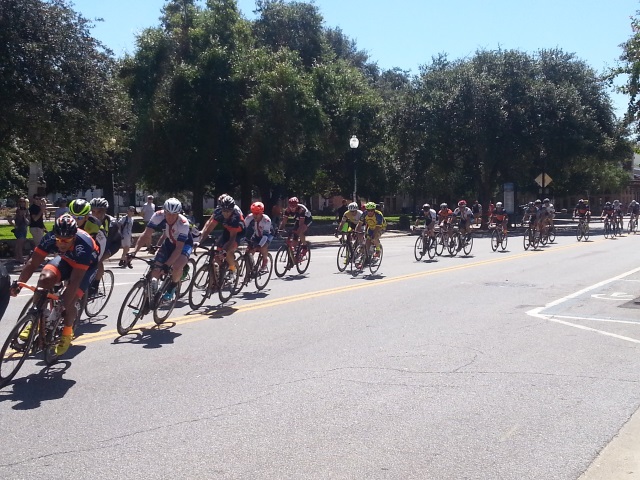 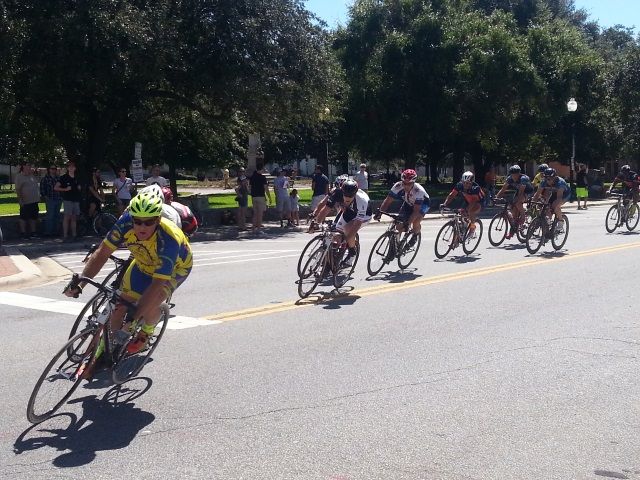 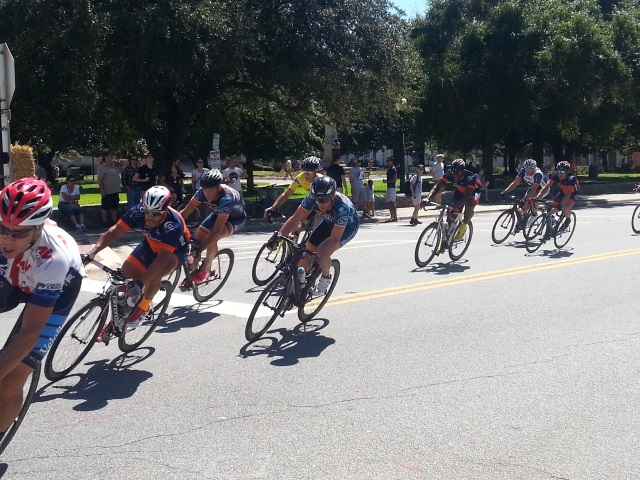 We watched them whiz past, trailed by a guy on a motorcycle wearing a jersey labeled “Official”.

“Well that was cool,” I said. “Did you know anything about this?” I asked Rhonda.

At the moment, it’s hard to find the time to fit in all the things we know about in this Summer Of Taking It All In. Now they’re even throwing stealth events at us!

All in all, not a bad problem to have.

God Bless you, Tom, you were a good man. I hope you made it to Someday before you left us.

Update: After writing this post, Rhonda received this video from a co-worker who’s with Pensacola Junior League.