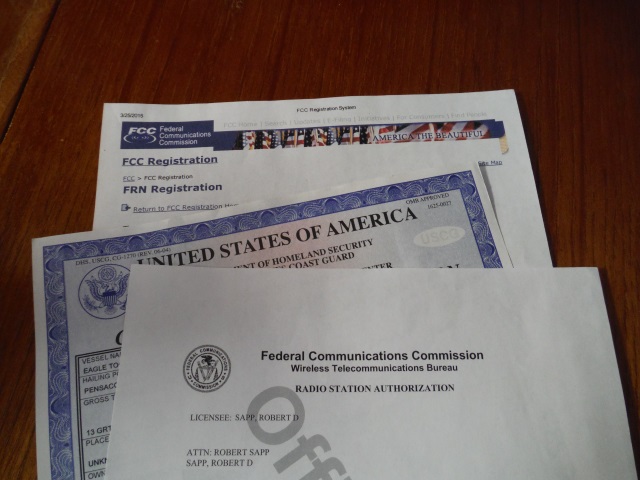 Editor’s note—a check of the logs shows that LOTH™ has been visited by readers from 80 different countries. The following post is very USA-centric. If you’re currently living somewhere else, you’ll have to research your local laws.

So you’re cruising along just minding your own business, and you decide to jump over to Bimini for a few days. But did you know that if you’re in the Bahamas or Mexico or pretty much anywhere outside the US and you use your VHF without having a ship’s station license, you’ve committed a criminal act? In the US, the Federal Communications Commission manages the radio airwaves, and they don’t really want to be bothered with having to issue a license to every person out there with a VHF radio on their boat. But in the rest of the world, the International Telecommunications Union, or ITU, calls the shots. And they want to see a license for that there radio.

Now if that was all there was to it, then I really wouldn’t care about it much. Even though we intend to visit foreign countries on our upcoming sail-about, I somehow doubt we’d ever run into the radio police demanding to see a copy of our ship’s station license. Passports and ship’s documentation definitely, crew manifest probably, but some piece of paper from the FCC? I seriously doubt it. Besides, there are reasons why we have a pirate flag onboard Eagle Too. Some of them have to do with a sailor’s natural libertarian tendencies and general contempt for bureaucracy. This would be one of those cases where we’d hoist the Jolly Roger and become broadcast scofflaws.

But after almost being run over by a barge one night, we started talking about adding an Automatic Identification System, or AIS as it’s known. Knowing we have some overnight passages in our future, we thought adding AIS would improve our safety by making us very visible to all the tugs, tankers, and freighters out there plying the seaways of the world.

To purchase a Class B AIS system (the kind that actively transmits your vessel’s name, course and speed to all the other AIS equipped vessels out there), you have to give the vendor your craft’s Maritime Mobile Service Identity number, or MMSI. Think of it as your boat’s very own phone number, and AIS as caller ID. Under US law, they aren’t allowed to sell you a Class B AIS system without that number, because they have to program the unit with your identifying information before they can ship it to you.

So we needed an MMSI number. It turns out that you can get an MMSI number from BoatUS for free (after 8/20/2015, free to BoatUS members, $20 to others). Fill out the form on their website, and wham-bam-thank-you-very-much, you have your very own number. Marine electronics dealers will happily take that number and use it to program your device. Easy peasy.

But then we started looking at Emergency Position Indicating Radio Beacons, or EPIRBs. If you’re not familiar, these are handy little devices that you carry on your boat that, when activated, will send out an emergency message via satellite that basically says “Help! Please Come Rescue Me!” It’s all about safety after all, and it’s one more layer of protection in case something unexpected were to happen out there. Your EPIRB also has to be programmed with your boat’s MMSI number.

So you’re out cruising the briny blue feeling all snug and safe with your recently purchased EPIRB programmed with your free MMSI number. Suddenly a lonely humpback whale decides that from below, your boat looks just like his former girlfriend Stella, and decides that he wants to have some hot monkey love for old times sake. By the time he figures out your boat is not his former paramour, it’s sinking, much the worse for wear. So you activate your EPIRB to call for a rescue. The signal is relayed by satellite to international search and rescue. Who have no idea who you are or what type of boat you’re on. Because you don’t appear in the ITU database.

Why is that? Well, because that free MMSI number that you received from BoatUS got reported to the Coast Guard, but the Coast Guard did not forward that information along to the ITU for registration in their international SAR database. That’s the FCC’s job. But you didn’t get your MMSI number from the FCC. Because that would have required that you buy the $215 license.

See where I’m going with this?

Here’s one more little wrinkle in the sheets. Say you never intend to venture outside US waters. Your VHF is unlicensed, and it, your AIS system, and your EPIRB are all programmed with your free BoatUS obtained MMSI number. But one day you feel the call of distant shores, spread your wings and head for Georgetown in the Bahamas. You decide to suck it up, buy the $215 FCC ship’s station license, and receive a real MMSI number that’s actually registered with the ITU (no, you can’t use the one you already have, because it’s not official and you’re graduating to the big boy/girl club now). Guess what? Most electronic devices limit the ability to reprogram the MMSI once it’s entered. Some limit the changes to two, many require the device to be returned to a service center, and some (like most EPIRBs) just plain don’t allow it. And oh by the way, it’s illegal to have two MMSIs for the same boat.

Fortunately I had the time during our long cold winter to research all this and realize the futility of trying to resist. We paid the fee, got the license and our very official and internationally registered MMSI number, and then programmed all our gear. If you ultimately come to the same conclusion, you’ll find everything you need to get started here:

I give up. Please take my money and give me a license.

One last little thing I feel the need to mention. Once you start down this path, you’re going to be dealing with the US Government, in the form of the Federal Communications Commission. The FCC runs a program called the Universal Licensing System, or ULS. You use the ULS to apply for and manage your ships station license. But the system is set up for the FCC’s convenience, not yours. Before you can ask permission to pay the fee to get the license, you have to first apply for an FCC Registration Number, or FRN. You then use your FRN to access all the FCC sites. They don’t want your name. Just your FRN. Because they’re the Government, and that’s just the way they are.

3 thoughts on “Waddaya Mean We Need A Stinkin’ License?”