“The German has the watch” was a term I first heard in the Navy. It meant an onboard system was running in automatic mode.

Yeah, it’s a pretty weak joke, but it’s one of the few from my Navy days that could be considered family friendly. Anyway, after several months of eating the elephant in little tiny bites, we now have a new crewmember. Our autopilot installation is finally completed and Otto is now standing watch on his own. And Rhonda has developed a reputation for superhuman strength in the process. But more on that later.

Because we’re an all-Raymarine boat, our choice of system was a Raymarine EV200 Evolution autopilot with a Type 1 rotary drive. 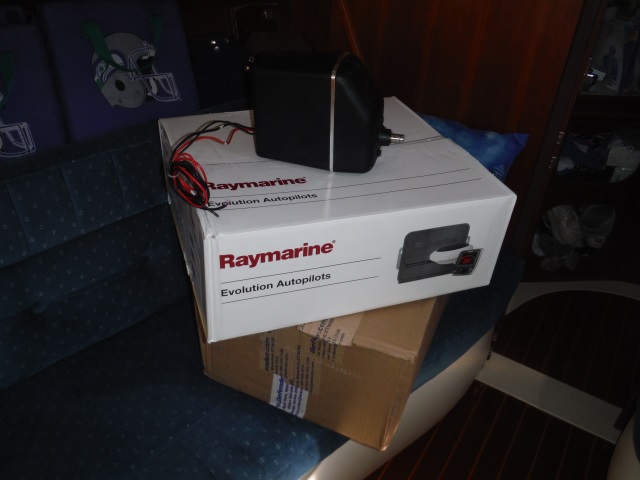 One reason it took so long to install is that it consists of five separate major components—the course computer (or Mr. Brain as we call it), the pilot control head, the rotary drive system, the rudder reference sensor and the gyrocompass. We also needed to place an order with Grainger for appropriate sprockets and drive chain. It took quite a bit of head scratching and a false start or two to find the best place for each part. By the time all the pieces were installed, I’d say the whole system set us back a bit over three boat bucks. But we really couldn’t see leaving without an autopilot. It’s one thing to helm for a few hours while sailing to the beach. It’s a whole ‘nuther thing to have to stand behind the wheel in the dark for hours during an offshore overnight passage.

Here’s a look at how it came together. If you’re considering adding an autopilot to a Hunter 376 or similar boat, you’ll probably know where all these places are. If not, it will still give you a pretty good idea of what was involved.

The first task was adding an additional conduit from the breaker panel at the chart table in the salon to the port cockpit locker ( or lazarette as it’s known) to run a power wire and a Seatalk NG backbone cable. The Hunter 376 came from the factory with a length of 1″ diameter PVC pipe that runs along the port side of the boat above the headliner to use as a cable chase. But with all the gear we’ve already installed, I doubt we could have shoved (or rather, pulled) one more wire through it. We needed to add room for more wires. While wandering the aisles at Lowe’s one day, I saw this flexible conduit, and thought “Perfect!” 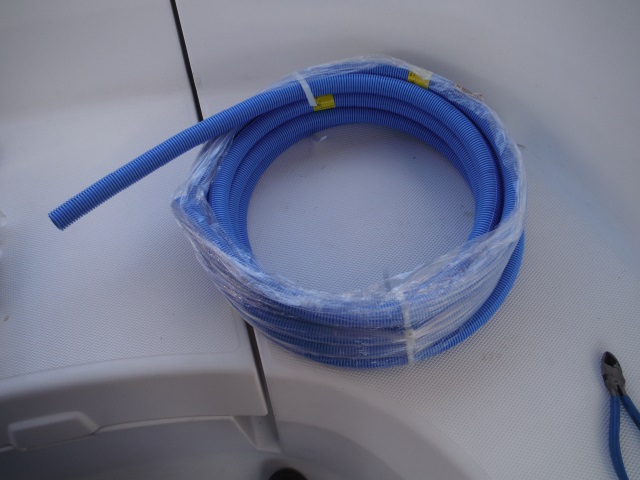 After removing the trim above the chart table, I was able to use my trusty fish tape to snake a messenger line the 15 feet from the salon to the cockpit, and then pull the flexible conduit through. Here’s the end in the salon: 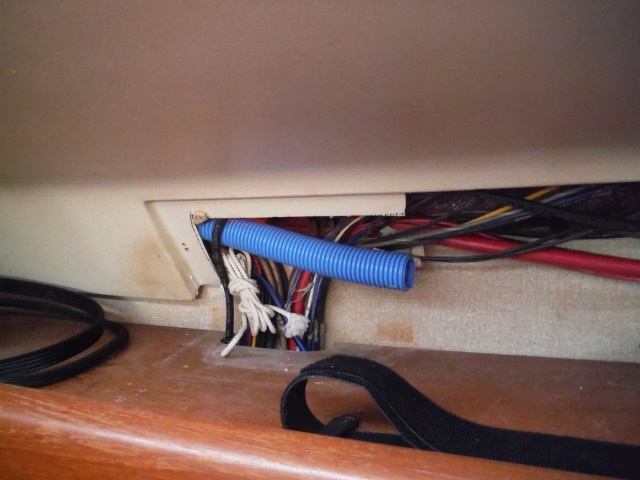 And here’s the other end in the port lazarette, with the autopilot wires already in place: 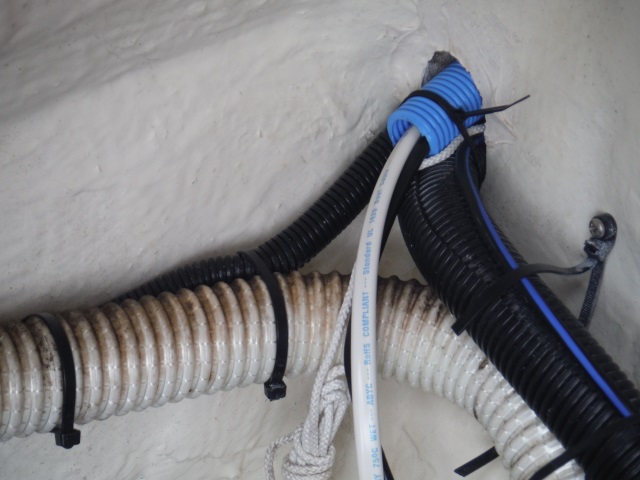 Once I had the wires pulled back to the cockpit locker, I then needed to pass them through to the interior space below. I had already completely filled the existing pass-through with battery cables when we installed the new batteries in the port and starboard lazarettes: 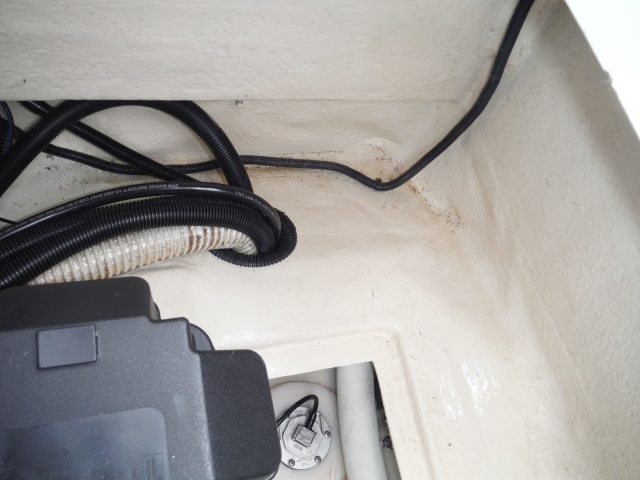 So after using my remote camera to take a good look underneath the floor of the locker to make sure I wouldn’t cut into anything important, I used my hole saw to make yet another hole in the boat to pass the autopilot wires through. 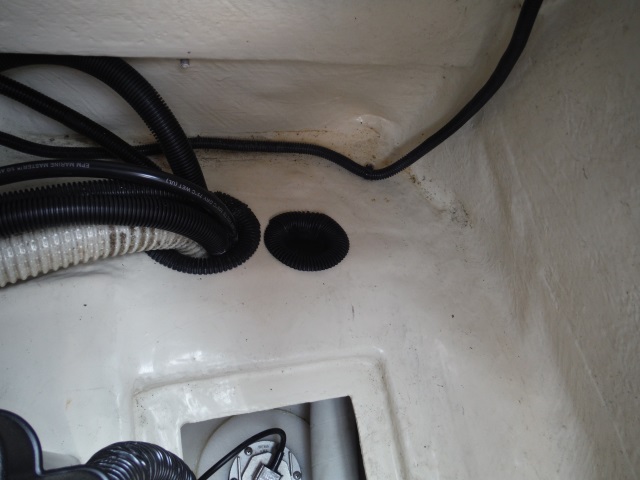 We decided to put Mr. Brain in a locker on the port side of the aft cabin that’s at the foot of the rear berth. This kept the wire runs short from Mr. Brain to the rotary drive motor, the motor clutch, and the rudder reference sensor, all located in the cockpit above. 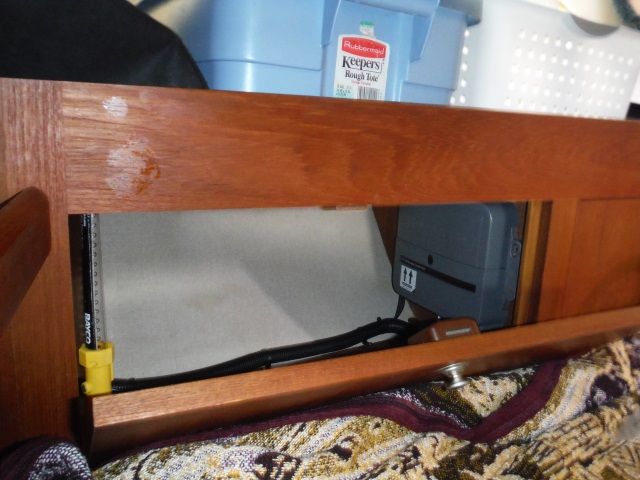 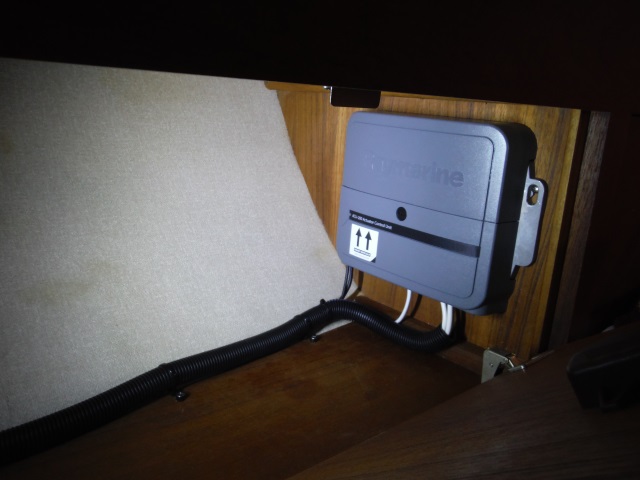 The rudder reference sensor (the thing that says Raymarine on it in the picture below) had to be connected to the rudder, naturally. This is under the removable cockpit deckplate aft of the pedestal. 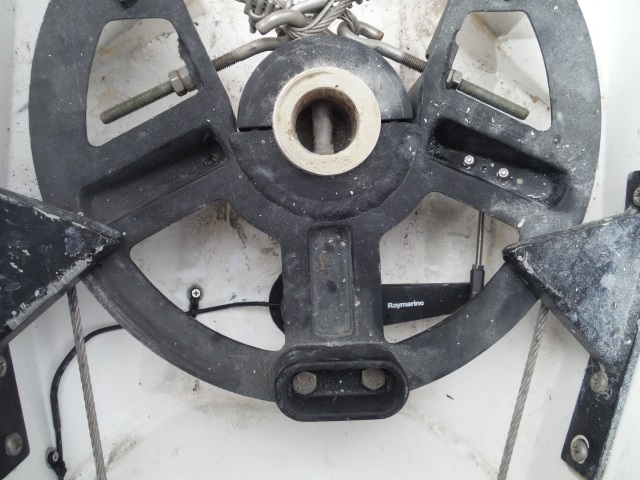 Testing the sensor to make sure it functioned properly. Hard to port: 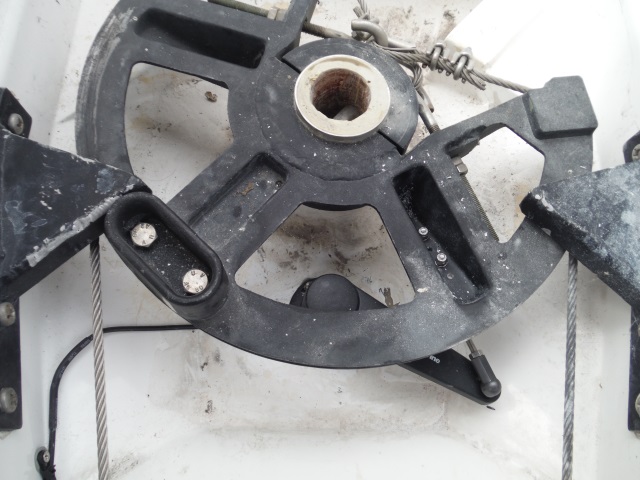 And hard to starboard: 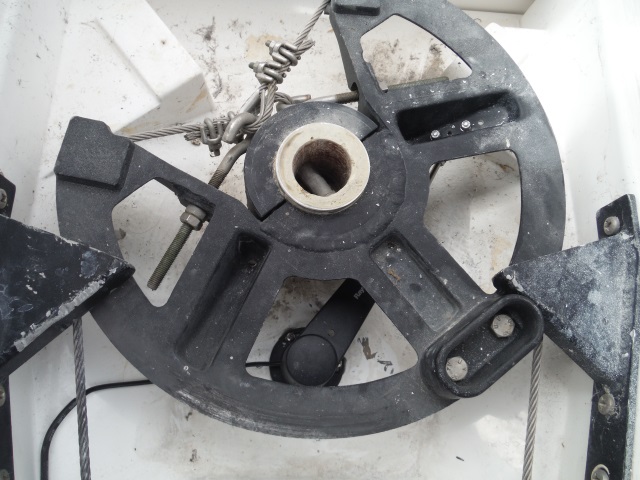 I’d left a space on the pedestal for the pilot control head. I’d envisioned the layout ultimately looking like this when we first started upgrading the obsolete instruments that were onboard Eagle Too when we purchased her. 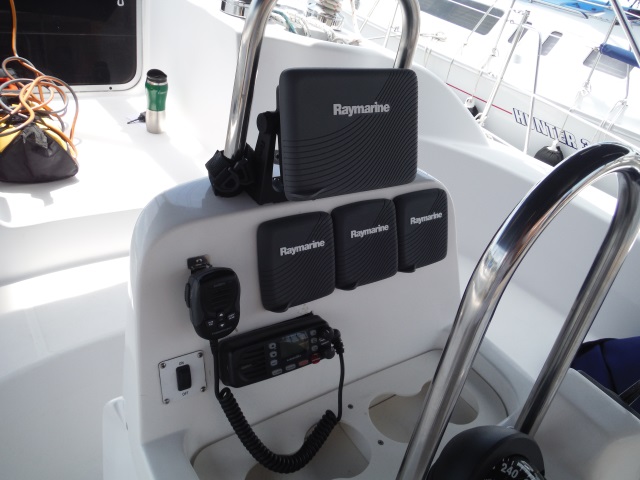 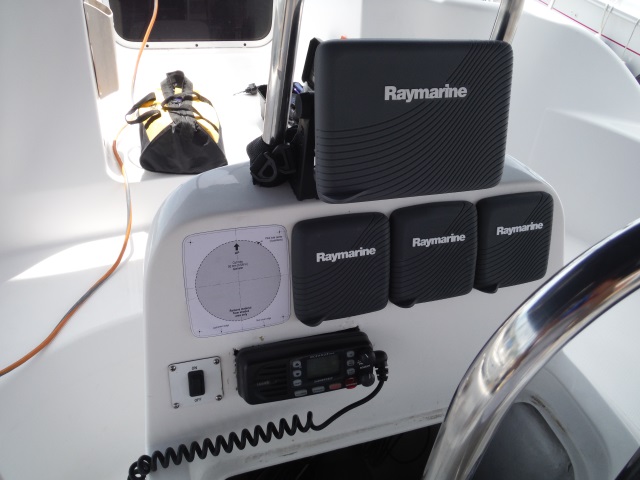 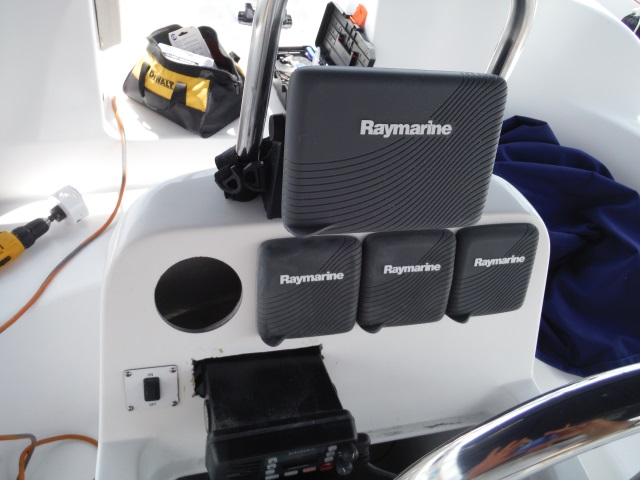 Since I had to pull the VHF radio out to mount the drive control head, I went ahead and fixed the cheesy, jammed-in-a-hole way the radio had been installed by mounting the proper trim plate. 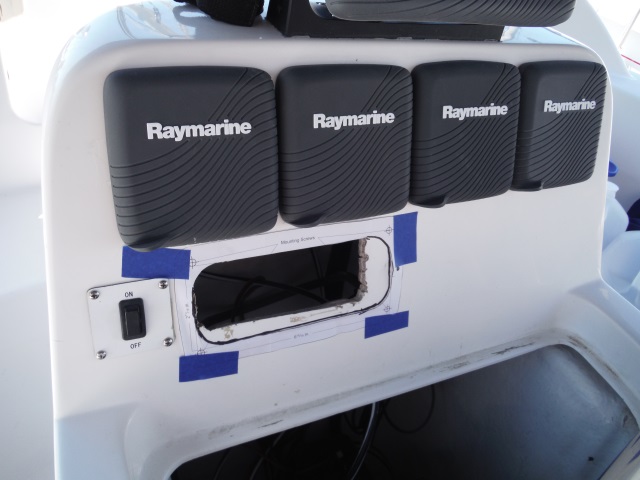 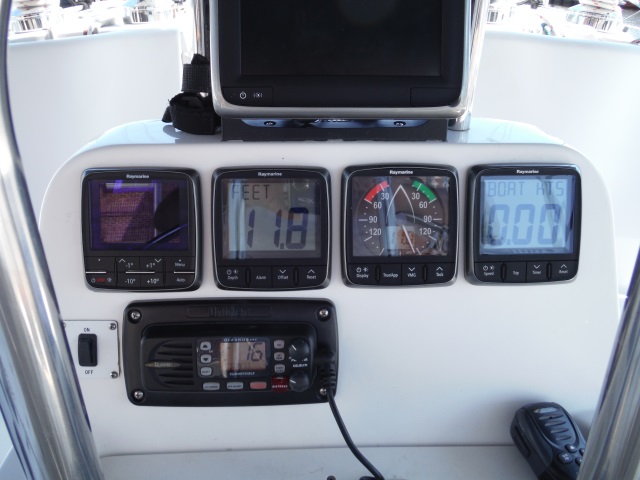 Much better. Now all it needs is a remote control for the stereo and a couple of DC outlets, and this pedestal will be just about perfect!

Installing the autopilot drive motor was probably the biggest job, and that’s where Rhonda discovered her super powers.

The inside of the pedestal originally looked like this. That red thing is the forward end of the steering wheel axle. It had a wrap of red electrical tape on it to retain the small key in the slot machined on the shaft that was needed to mount the autopilot drive sprocket. Hunter had already prepared the shaft at the factory for the sprocket. 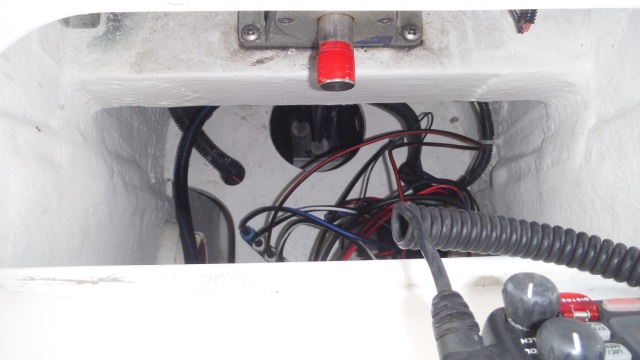 Here’s the same area after the drive motor and chain drive were installed. 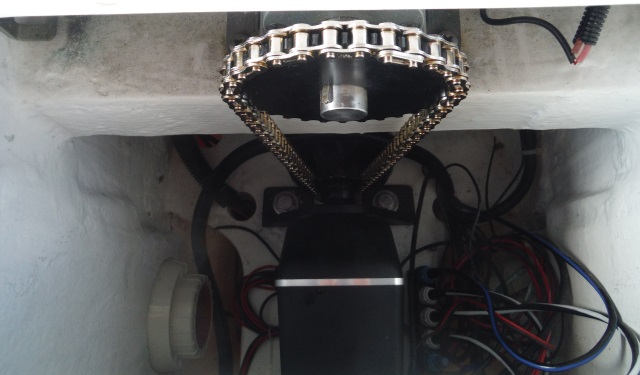 The tension on the chain is adjusted by using shims under the motor mounting bolts. I was really impressed that Hunter had not only installed a shelf on which to mount the motor, but had placed it at exactly the right distance below the wheel axle so that the chain tension was perfect without needing any of the shims provided.

Finding a good place for the gyrocompass was a challenge. I first tried mounting it to the back side of a removable access panel aft of the rear berth. 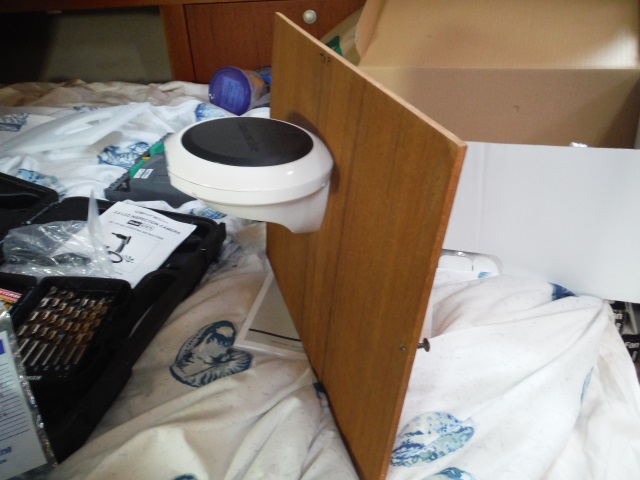 it worked great, until I started the engine. Then the chartplotter display would turn upside down. Turns out that the gyrocompass ended up too close to the new battery cables we’d installed. 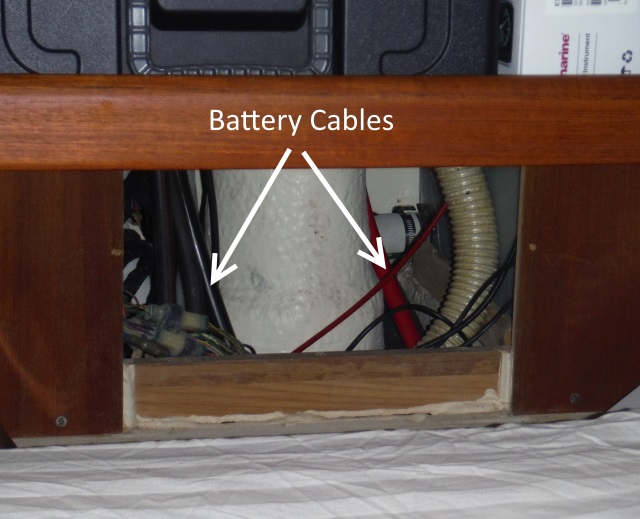 The current flow to the batteries from the engine’s alternator threw off the gyrocompass, and the chartplotter would show us moving backward through the water, which really made for some interesting navigational challenges. I ended up moving it to an empty space underneath the rear cabin seat (unfortunately, I apparently forgot to take a picture before I put the seat back together). 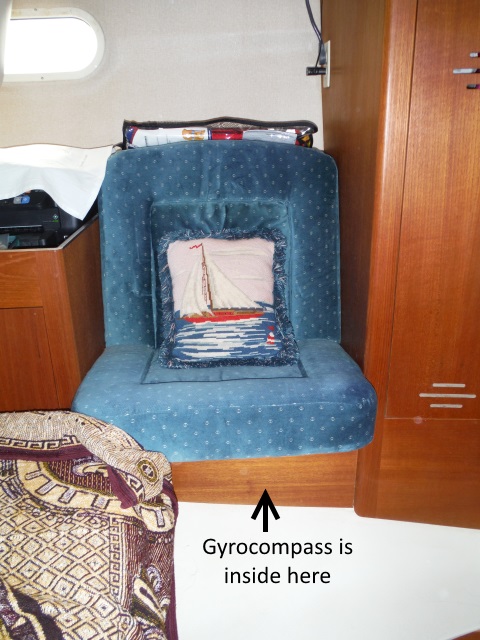 This isn’t an ideal location for two reasons. First, it’s recommended (but not required) that the compass be installed on the centerline of the boat, and this spot isn’t. Second, the compass sits right on top of the sanitation line that runs from the toilet to the holding tank, and that hose is reinforced with a steel wire, which might affect the compass. But the location did meet my two key criteria; the compass was out of the way and safe from being accidentally hit by something and possibly broken, and it was within three feet of a Seatalk connector so that I could plug it in to the network backbone without having to buy another cable. Anyway, it calibrated OK when we did the first seatrial on the system, so as long as no one wearing iron underpants sits down there, I think we should be OK.

So after all that, here’s Otto taking the helm for the first time. He’s set to wind vane mode here, which means that rather than following a set course, he’s steering the boat to maintain a constant wind angle. Since the breeze was only about nine knots and variable, he’s hunting around a little, but he did a terrific job at keeping us on a beam reach.

As for Rhonda’s super powers, well, I needed her help to torque down the mounting bolts for the rotary drive motor. We were working on this one, specifically: 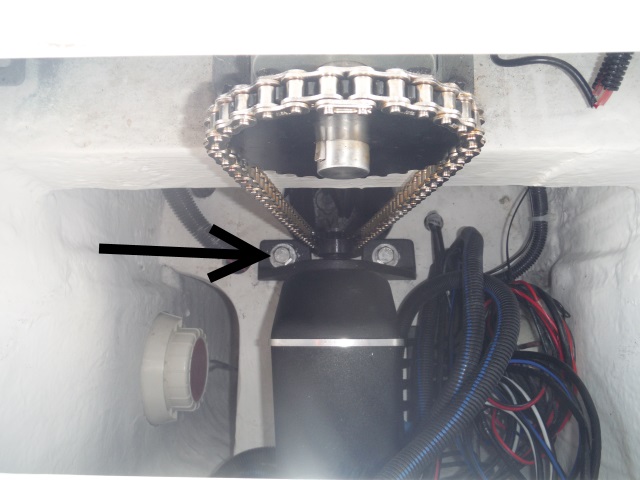 I’m basically standing on my head reaching way down inside the pedestal to hold a wrench on the nut that we’re trying to thread onto the bottom of that 1/2″ stainless steel bolt, while Rhonda reaches in and turns the bolt from above with a socket wrench. Grunting with effort, she manages to get about three or four revolutions on the bolt head, at which point I can no longer keep the nut from spinning. Unfortunately, it’s nowhere near tight enough. It probably needs at least another dozen revolutions before the bolt is tight. “Let’s take it off and try it again, maybe it’s not going on straight,” I said.

But it wouldn’t come off. We tried and we tried, and nothing we did would get that nut to come off that bolt. Our wrists finally gave out from the strain and awkward position, and I called in reinforcements. I described the situation to my brother. “No problem,” he said cavalierly. “We should be able to get it off.”

But we couldn’t. With the two of us sweating and grunting to maximum effect, that damn nut wouldn’t budge. “I think you’re going to have to cut it off,” he finally said in defeat.

Unwilling to surrender, I called a marina friend. “No problem,” he said. “I’ll bring my big cheater bars and we’ll bust it loose.”

Three men, giant torque wrenches, and multiple extensions, all giving it all we had, and that damn nut just laughed at us. So I eventually had to break out the Dremel tool and do a blind cut on the underside of the shelf that the bolt passed through, trying to shear off the nut. I blew through ten cutting wheels before finally getting it, but eventually I beat it into submission.

When I recently mentioned to that same friend that we’d finally finished installing the autopilot, he replied, “You didn’t let Rhonda tighten the nuts, did you?” And so her reputation is formed.

Actually though, what we experienced is a cruel little trick of physics called galling. Stainless steel is particularly prone to it. What happens is that friction between the threads of the nut and bolt cause the surfaces to weld together at a microscopic level. As Rhonda turned the bolt, it and the nut basically became one. And there was no way we were ever going to able to get them apart.

It was my fault. You should always, always, always use a lubricant on stainless steel fasteners. My personal favorite is Tef-Gel. I had a tube of it right there in my tool box. But we were just doing a test fit. That’s all. It was coming right back off, and then I’d be able to lube it. Or so I thought…

Lesson learned. But it’s all good. Because we got a funny story out of it, and Otto is finally on the job. And Eagle Too is a giant step closer to being ready to go!